The Long-Run Trend of Residential Investment in China 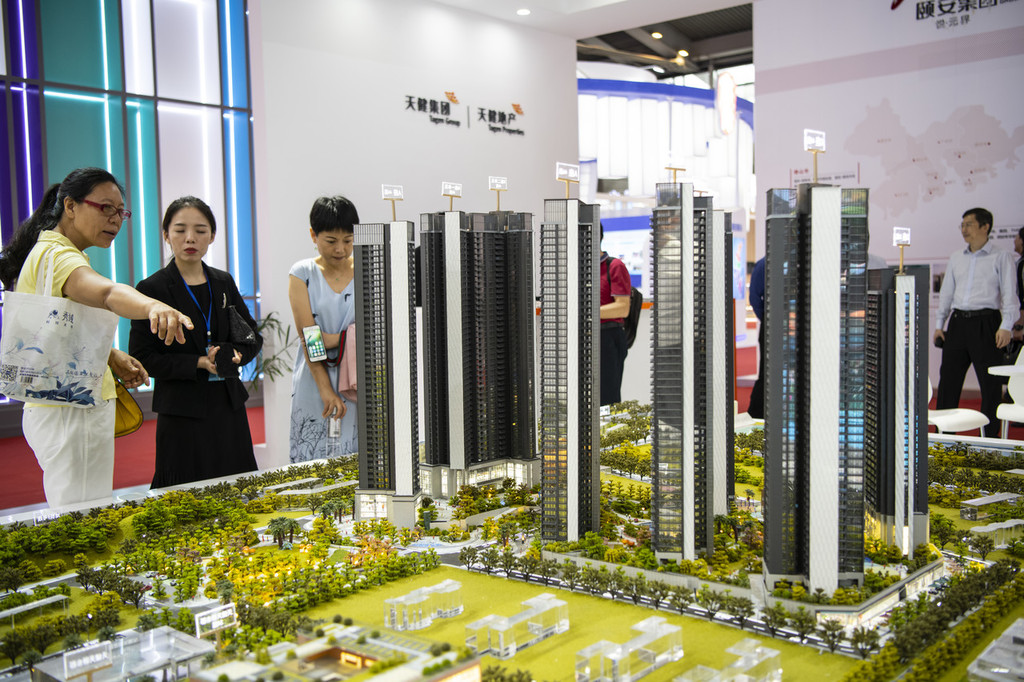 Residential housing investment has been a key growth engine for China since urban housing commercialization took off in the late 1990s. By international standards, China’s current residential investment as a share of GDP is well above that of countries with similar real household income levels (adjusted for purchasing power parity and inflation). Although various distortions render China’s property market susceptible to both price misalignment and overbuilding (Ding et al 2017), there are powerful underlying drivers behind China’s housing market, including the strong growth of household income (Fang et al 2016) and the pace of urbanization (Garriga et al 2017). As some of these factors are expected to moderate in the long run given China’s maturing economy and demographic trends, residential investment growth should moderate accordingly. 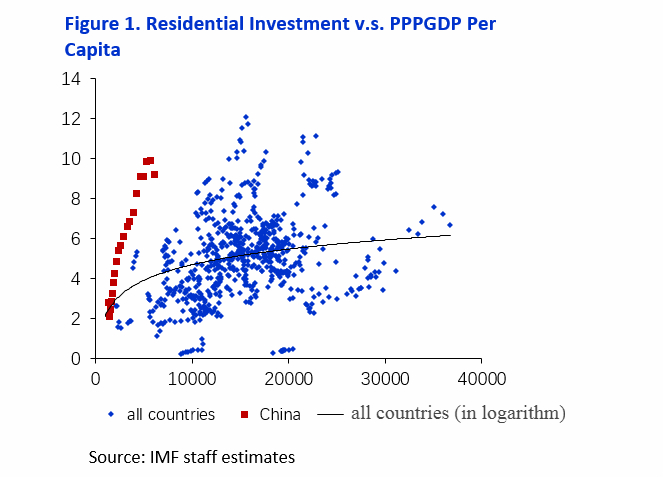 Our approach is in line with a strand of housing cycle literature that highlights the role of housing demand in explaining house price fluctuation (Iacoviello and Neri 2010; Liu, Wang, and Zha 2013; and Lian 2019). These studies consider a change in the share of housing consumption in total consumption as a channel for primitive shocks to influence house prices. However, no study has provided cross-national evidence on why the share can change over time. One obstacle is that it is not possible to directly measure the housing consumption of owner-occupied homes (see Note 1).

There are several reasons why this residual term matters in China’s context. First, there could be pent-up demand for housing due to the underdevelopment of the country’s mortgage markets. Housing services consumption as a share of total consumption can be small if mortgages are not sufficiently accessible, because owning a home is expensive: it not only provides shelter, but also has a “shadow” value of relaxing tight borrowing constraints. The gradual liberalization of mortgage markets since 2004 could have led the residual term to rise over time. Second, ongoing urbanization in China makes housing services increasingly dependent on land rather than residential structures (imagine tighter zoning restrictions making new construction more difficult and thus increasing the share of land value in housing services). On the one hand, the rising cost of land can put downward pressure on residential investment. On the other hand, newly arriving migrants to cities create additional demand for housing construction. Therefore, the overall effects through the urbanization channel are ambiguous. Third, speculative investment based on the expectation of future house prices can also drive residential investment to go above the current demand for housing services (Choi et al 2014). 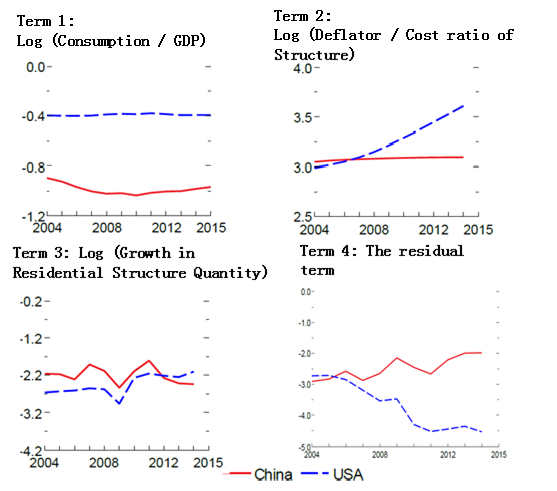 By using this accounting decomposition framework, we can put China’s residential investment dynamics into perspective through a comparison to the United States. From 2004 to 2016, the US experienced a sharp decline in residential investment as a share of GDP. Decomposition of the ratio indicates that the different dynamics between China and the US mostly came from the residual term.

To understand the drivers of the residual term, in the second step we used cross-national analyses to show how the residual term may be related to structural factors, including the mortgage credit to GDP ratio, the share of urban population, its change, and the average house price growth in the past five years (as a proxy of speculation in housing markets). We conducted a panel regression using a sample of countries between 1980 and 2016 to examine this relationship. The regression results suggest that the mortgage credit to GDP ratio is a robust variable to predict the residual term, while the other structural factors are not as robust (see Note 2).

This two-step approach allowed us to provide some tentative answers to what may have caused the rapid increase in the ratio of residential investment to GDP in China since 2004. First, housing speculation and urbanization played limited roles in explaining China’s residential investment boom. This conclusion is drawn from a combination of four observations: (1) the residual term plays an important role in explaining the housing investment boom; (2) the pace of urbanization (as a proxy of the impact of new migrants on residential investment), however, has been fairly stable during this period; (3) the average house price growth rate in the past five years (as a proxy of housing market speculation) has also been stable and even declined somewhat at the end of the period; (4) as mentioned earlier, the relationship between the residual term and urbanization or the average house price growth in the past five years is not very robust.

Therefore, we can attribute China’s residential investment boom to two main factors: (1) the rebalancing of the Chinese economy towards consumption, as indicated by the decomposition analysis, and (2) the liberalization of the country’s mortgage markets, which helped meet the pent-up demand for housing and raise housing services consumption as a share of total consumption. It is noteworthy that rebalancing towards consumption also led consumption growth to be in tandem with the strong increase in the user-cost of housing. We highlight this channel because slower consumption growth and a continued rise in the user-cost of housing are the key reasons for us to predict that the residential investment to GDP ratio will decline in China going forward (see Note 3).

Based on the envisaged structural change of the Chinese economy over the long run, we project China’s residential investment to GDP ratio to gradually moderate to the pre-boom level over the medium term. Residential investment’s contribution to GDP growth would decline gradually from currently about one-half percent of GDP to -0.1 percent over this period. As noted earlier, a key driver of this decline is the projected moderation of consumption growth relative to the growth of the costs of residential structures (represented by the third term in the decomposition equation). This reflects the diminishing “base” effects as consumption growth is projected to moderate from 14 percent during the residential investment boom in 2010–15 to less than 9 percent by 2024, as well as rising labor costs due to population aging and reduced working-age population. In particular, the real user cost of structures is assumed to grow at around 5 percent between 2019 and 2029, which would be slightly lower than the average of 5.4 percent between 2009 and 2018 (see Note 4).  The slower rebalancing dominates the direct positive impact of rebalancing (the projected further increase in consumption as a share of GDP) on residential investment, represented by the first term in the decomposition equation. 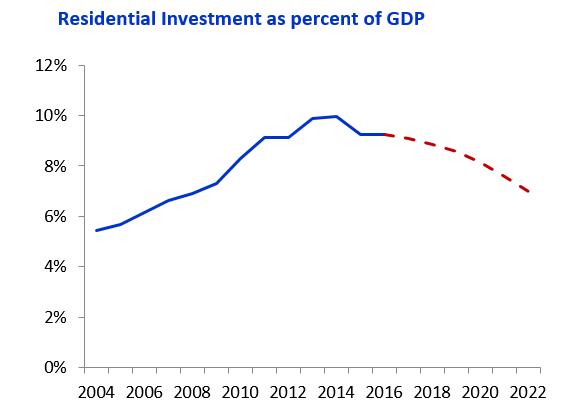 To the extent that the projected decline in residential investment reflects the rebalancing of the Chinese economy and its transition to slower but more sustainable growth, policymakers should avoid preventing such a decline. That said, given the importance of housing in the Chinese economy, a sharp decline in residential investment should be avoided. In this regard, pro-rebalancing policies such as a more progressive tax system and higher spending on social transfers could boost consumption and ameliorate income inequality, which in turn would support demand for housing. In the context of developing the “long-term mechanism” for housing, the government should also further promote social and rental housing and liberalize land supply, which would create additional demand for housing, directly via improved affordability and indirectly via the positive impact on rebalancing, and thus support a more gradual adjustment in the residential real estate market.

Note 1: The underlying method adopted by the national income and product account to impute it has been criticized by several studies (Prescott 1997; Gordon and Van Goethem 2005; and Díjaz and Luengo-Prado 2008).

Note 2: In Ding and Lian (2018) we did not find mortgage credit to be an important factor to explain the residual term. This result changed after we updated the database.

Note 3: According to Bentolila and Saint-Paul (2003), the construction sector has the highest labor share among all industries, and if wage cost grows faster than that of labor productivity, it can drive up the unit labor cost.

Note 4: This assumption implies that the labor income share in China will be broadly stable between 2019 and 2029.

(Ding Ding and Weicheng Lian are economists at the International Monetary Fund.)