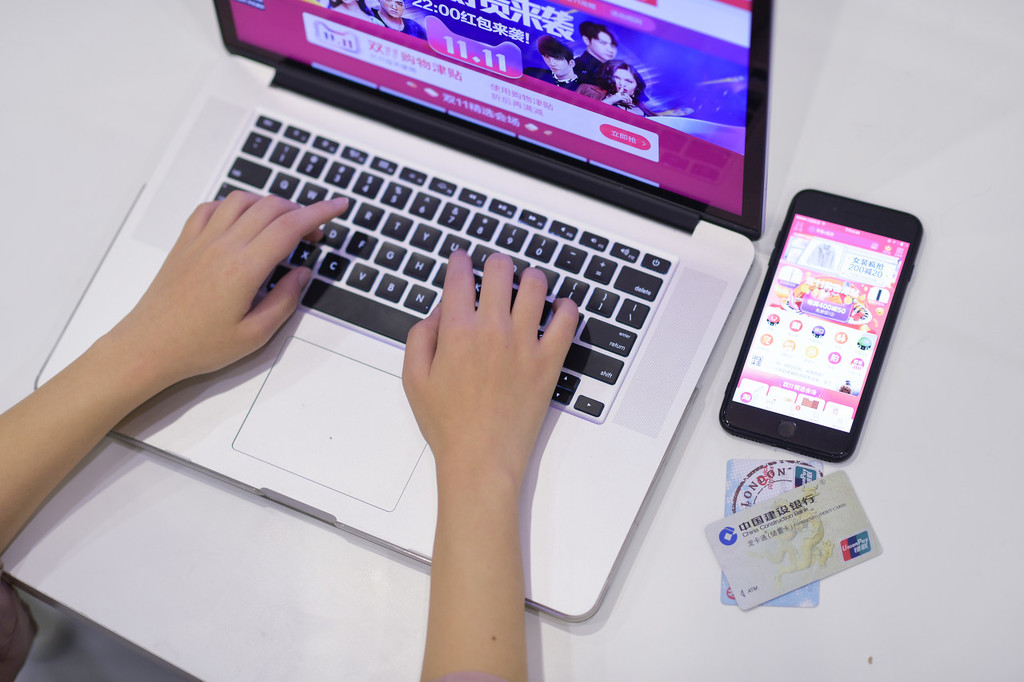 China has quickly become the largest e-commerce market in the world. The annual total e-commerce trade volume in China increased thirtyfold from RMB 930 billion in 2004 to RMB 29,160 billion in 2017—a compound annual growth rate of 30 percent (see Note 1). Annual e-commerce trade volume in China increased rapidly from 2004 to 2018, growing from RMB 930 billion (US$112 billion) to RMB 32 trillion (US$5 trillion) (Figure 1). The number of internet users in China reached 772 million in 2017, of which 533 million made purchases online (see Note 2). Express mail service exceeded 30 billion pieces in 2016, of which some 60 percent is related to e-commerce (see Note 3).

Source: Ministry of Commerce of China


The development of online retailing, however, remained uneven across Chinese provinces, as measured by the Online Business Index (OBI) and the Online Shopping Index (OSI) developed by AliResearch (Map 1 and Map 2) (See Note 4). In 2015, in Beijing, 45 percent of the total retail sales of consumer goods was purchased online, followed by nearly 40 percent in Shanghai, 35 percent in Zhejiang, and 28 percent in Guangdong. However, the share was much lower (less than 2 percent) in nine inland provinces (Figure 2). 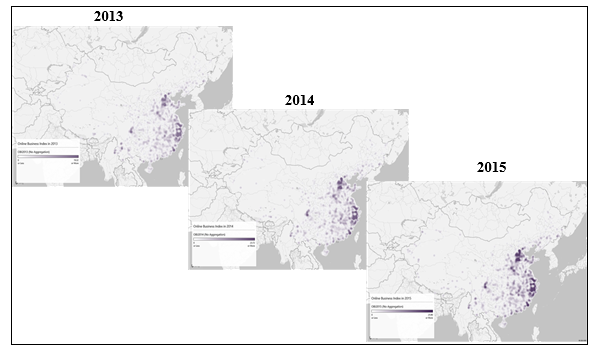 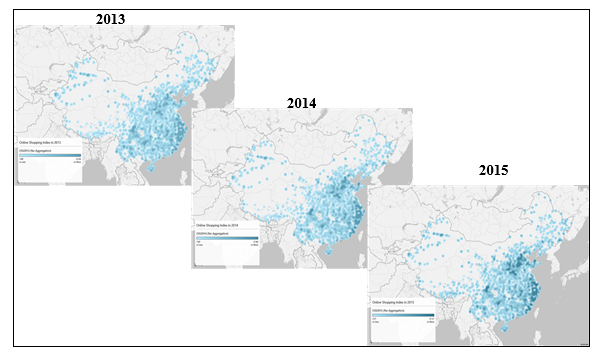 The welfare implications of e-commerce have been discussed in the literature and mostly focus on developed countries (Brown and Goolsbee 2000; Hortaçsu et al. 2009). On the one hand, e-commerce offers consumers lower search cost and more product variety than traditional retail stores, thus improving consumer welfare. Consumers may also gain from accessing online merchants who do not have local brick-and-mortar stores (Dolfen et al. 2019). On the other hand, the intense competition of e-commerce can result in efficiency and welfare gains for the entire society through effects on prices. However, the intense competition may also squeeze out brick-and-mortar stores and smaller retailers, which in turn depresses offline shopping (Goldmanis et al. 2010).

In developing countries, where a large proportion of people live in remote areas with limited access to offline retail stores, e-commerce may has the potential to reach a wide range of consumers who are constrained by limited access to markets. Fan et al. (2016) show that e-commerce development in China disproportionately improves consumer welfare in remote cities as compared to major cities. Couture et al. (2017) finds that e-commerce expansion reduces the cost of living for certain groups of the rural population who use it, though the average effect is muted.

Methodologically, our study advances the existing research in three ways by matching a nationally representative China Family Panel Studies (CFPS) survey with county-level e-commerce information obtained from Alibaba. First, our study directly investigates the impact of e-commerce on consumption growth at the household level rather than at the aggregate city level as in Fan et al. (2016). Second, our results are likely more representative because CFPS covers many more counties than the sample of eight counties in three provinces used in Couture et al. (2017). Third, our analysis examines the heterogenous associations between e-commerce development and various categories of consumption (see Note 5), which were not discussed in other studies.

First, e-commerce development is associated with higher consumption growth (see Figure 3). A one standard deviation above the mean of e-commerce development indicator, measured by online purchases over census population, is associated with about 30% annual household expenditure per capita growth in China. The relationship holds for both urban and rural households and across all regions for ten categories (see Note 6) that are regularly consumed by most households. Lower search and transaction costs, a key feature of e-commerce, makes price discovery easier, bringing the law of one price closer to reality (Gorodnichenko and Talavera 2017), and creates more trad, enabling higher specialization in the long-tail market. More- competitive prices tend to reduce the cost of living for residents. The findings are consistent with the literature. Couture et al. (2017) show that the expansion of e-commerce to the Chinese countryside is associated with lower cost of living, and, for the goods that are available at both the Rural Taobao online terminal and in the village, the median price from the online terminal is cheaper by 15 percent. According to a McKinsey report (McKinsey, 2013), e-tailing may have lowered China’s average retail price by 0.2 percent to 0.4 percent in 2011 and by 0.3 percent to 0.6 percent in 2012. Holding disposable income constant, a lower cost of living means more discretionary spending power, which implies higher consumption.

Third, the consumption of durable goods, and in-style goods (such as cosmetics and beauty, travel, and entertainment) and high-income elasticity goods (travel, automobiles, and dining out) exhibit stronger growth than the consumption of local services (such as education, medical services,  expenditure on vehicles other than purchasing automobiles, and home repair). By enabling traders to locate nearby producers and sell products directly to consumers, e-commerce can lower transportation and contracting costs associated with remote ordering. They can also save traders’ storage costs and allow them to keep a small inventory. Thanks to the lower costs of transportation, contracting, and storage, sellers can source more frequently, can provide more fashionable products, and offer greater variety to consumers (Startz 2018). If the cost savings are passed through, consumers will obtain lower prices.

In addition to the three major findings, we also find the association between e-commerce development and food consumption growth is particularly strong for households in rural areas and the west, as well as for the bottom income group. The relationship seems to defy the Engel curve. The puzzle is likely due to the large increase in online purchasing of baby food and formula, which are the top two packaged foods sold online in China. In sum, our empirical results show that, in China, household consumption growth is positively associated with initial local e-commerce development. The relationship is stronger for households in the less-developed inland regions and in rural areas than in the coastal regions and urban areas, and particularly for poorer households than richer ones. E-commerce development is associated with lower consumption inequality across regions and income groups. The impact of e-commerce on consumption mainly stems from price and variety channels for the poor. Income increases associated with e-commerce business development in a region is also a potential channel for the growth of consumption (see Note 8).

China has been on a fast track of e-commerce development. Developing e-commerce requires not only internet, but many other factors, such as infrastructure and logistics services, skills, entrepreneurship, and an overarching business environment that facilitates online and offline business. With the right policies, further development of e-commerce can help accelerate consumption growth and narrow the regional gaps in e-commerce development, which in turn can lead to a more inclusive spatial development pattern.

Note 6: These categories include expenditures on cosmetics and beauty, food (foods at home and dining out), clothes, utilities, communication, local transportation, and entertainment.

Note 7: Several papers suggest that e-tailing is not just a replacement of purchases that would otherwise be made but could spur incremental consumption, particularly in small cities and towns where there is pent-up demand for goods that local physical stores cannot deliver (McKinsey 2013). Couture et al. (2017) show that 62 percent of goods bought through Alibaba’s Rural Taobao online terminal were not available in the village. For durable goods, this number rises to 84 percent.

Note 8: While we have tried to control for as many factors as possible, some variables correlated with both the outcome variable and the e-commerce indicator may have been omitted, which may bias the estimates of the e-commerce variable. Our findings imply only associations and not causality. More studies are needed to tease out the causal relationship between e-commerce development and consumption growth.

Disclaimer: The views expressed in this paper are those of the authors and do not reflect the views of the World Bank or its affiliated organizations.

[Xubei Luo is a senior economist of the World Bank; Yue Wang is a Ph.D. candidate at Cornell University; and Xiaobo Zhang is a distinguished chair professor of economics at the National School of Development, Peking University in China, and senior research fellow of International Food Policy Research Institute. The blog is written based on Luo, Wang, and Zhang (2019)]