The Impact of US-China Trade Tensions

US-China trade tensions have negatively affected consumers as well as many producers in both countries. The tariffs have reduced trade between the US and China, but the bilateral trade deficit remains broadly unchanged. While the impact on global growth is relatively modest at this time, the latest escalation could significantly dent business and financial market sentiment, disrupt global supply chains, and jeopardize the projected recovery in global growth in 2019. 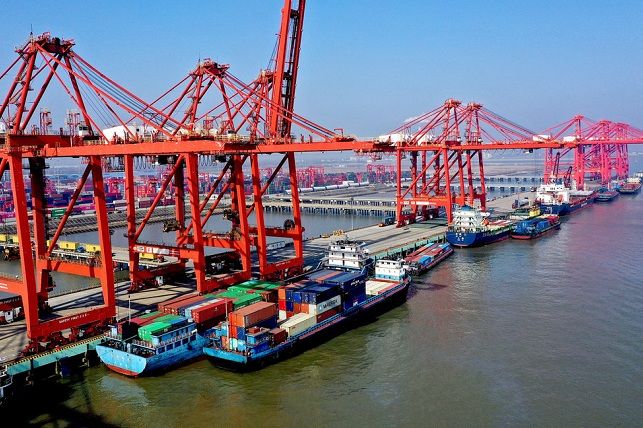 Evolution of trade in the US and China

The raising of US tariffs to 25 percent on $200 billion of annual Chinese imports on May 10, together with the announced Chinese retaliation, marks the latest escalation in the US–China trade tensions.

The impact of previously imposed tariffs by the US and subsequent retaliation by China is already evident in trade data. Both the countries directly involved and their trading partners have been affected by rising tariffs.

In 2018, the US imposed tariffs sequentially on three “lists” of goods from China, targeting first $34 billion of annual imports, then $16 billion more, and finally an additional $200 billion. As a result, US imports from China have declined quite sharply in all three groups of the goods on which tariffs were imposed.

In cases where there was a delay between announcement and implementation of tariffs, as in the case of the $16 billion and $200 billion lists, or plans to phase in the tariff increase, as in the case of the $200 billion list, we observed an increase in import growth in advance of the effective dates. This suggests that importers stocked up ahead of the tariffs, accounting for the sharper decline in imports thereafter.

As China imposed retaliatory tariffs, US exports to China also declined. While the front-loading dynamic is not evident in this case, US export growth to China has been generally weaker since the trade tensions began. 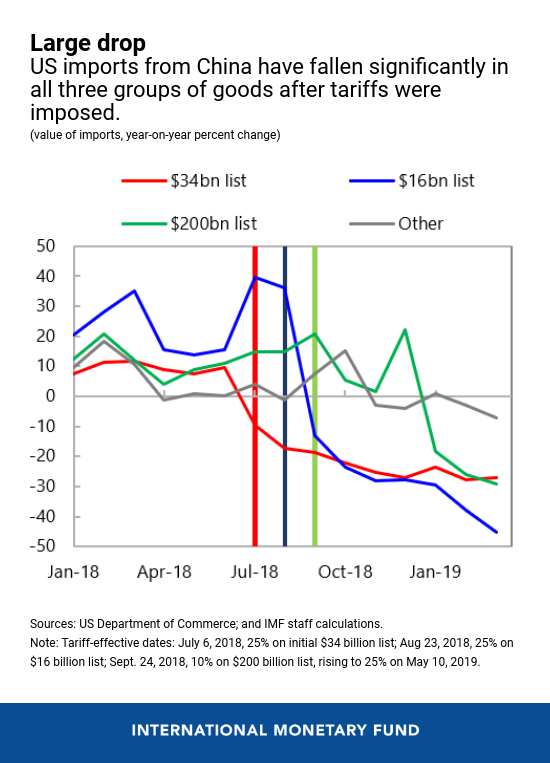 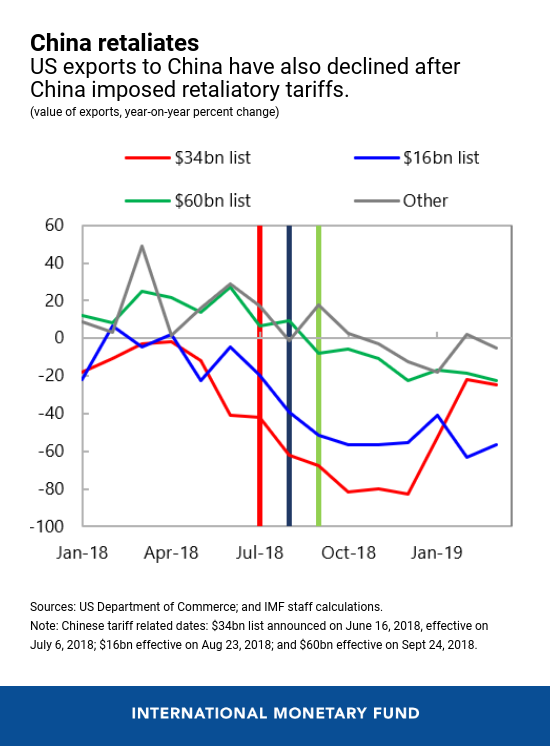 Consumers in the US and China are unequivocally the losers from trade tensions.  Research by Cavallo, Gopinath, Neiman and Tang, using price data from the Bureau of Labor Statistics on imports from China, finds that tariff revenue collected has been borne almost entirely by US importers. There was almost no change in the (ex-tariff) border prices of imports from China, and a sharp jump in the post-tariff import prices matching the magnitude of the tariff. 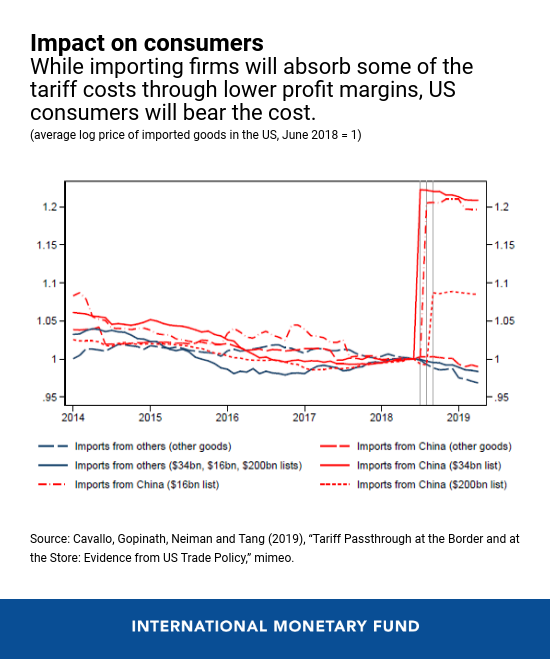 Some of these tariffs have been passed on to US consumers, like those on washing machines, while others have been absorbed by importing firms through lower profit margins. A further increase in tariffs will likely be similarly passed through to consumers. While the direct effect on inflation may be small, it could lead to broader effects through an increase in the prices of domestic competitors.

For example, US imports from Mexico increased significantly among some goods on which the US imposed tariffs. After the $16 billion list was implemented in August, a sharp decline of nearly $850 million in imports from China was almost offset by about $850 million increase from Mexico, leaving overall US imports broadly unchanged. For other countries such as Japan, Korea and Canada, one can observe smaller increases in US imports relative to the levels in September-November 2017. Of course, aggregate data could be masking other factors driving the bilateral trade patterns, such as the use of inventories. For example, there was little or no change in imports from third countries in the case of photosensitive semiconductor devices.

The other channel by which producers could be affected is through market segmentation in the price of traded goods. This was most clearly observed in the case of soybeans, where US exports to China fell dramatically in 2018 after China imposed tariffs. The United States was China’s dominant soybean supplier, along with Brazil, in 2017. With the tariffs, the price of US soybeans fell while that of Brazilian soybeans increased, as US exports to China dropped to near zero and Brazilian exports to China trended higher. Though prices have since re-converged and soybean exports to China have resumed to some extent, US soybean farmers suffered, while those in Brazil benefited from trade diversion and market segmentation. 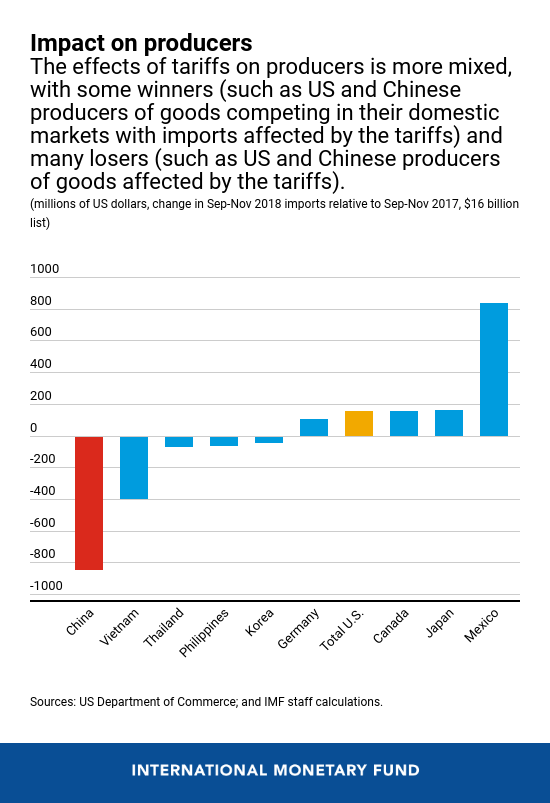 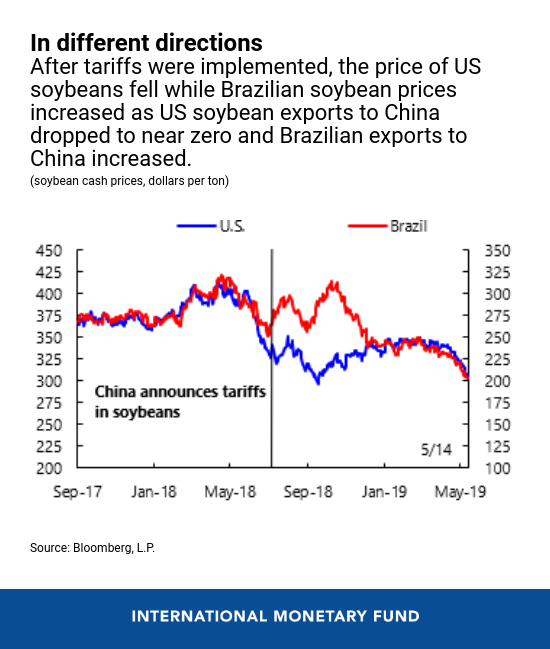 The impact on US producers with significant exposure to Chinese markets was also captured in stock market valuations. For instance, the equity price performance of US companies with high sales to China underperformed relative to US businesses exposed to other international markets, after tariffs linked to the $34 billion retaliation list by China were implemented. 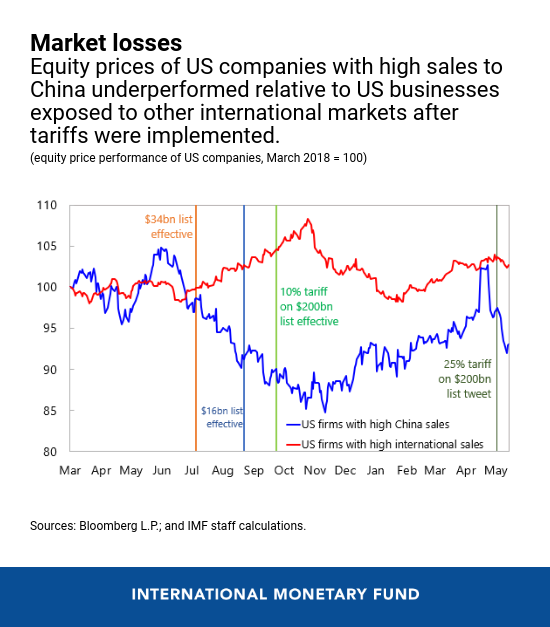 The gap narrowed at the beginning of 2019 with the trade truce. But it reopened again after the US tariff increase to 25 percent on the $200 billion list was announced on Twitter.

The ratcheting up of bilateral tariffs between the US and China has had limited effect on their bilateral trade balance. In fact, in 2018, the trade deficit increased for the US as imports from China rose, which partly reflects the front-loading. As of March 2019, a small decline can be observed, but US exports to China are also falling.

Indeed, macroeconomic factors—including relative aggregate demand and supply in partner countries and their underlying drivers—play a much bigger role than tariffs in determining bilateral trade balances. 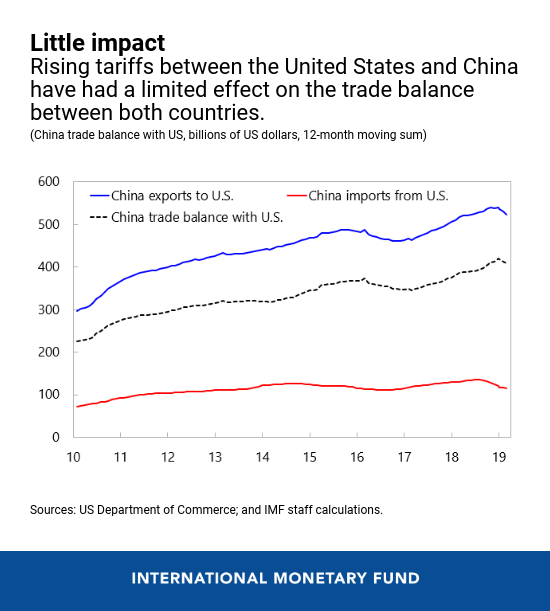 At the global level, the additional impact of the recently announced and envisaged new US-China tariffs, expected to extend to all trade between those countries, will subtract about 0.3 percent of global GDP in the short term, with half stemming from business and market confidence effects. The IMF’s forthcoming G-20 Surveillance Note in early June will provide further details. These effects, while relatively modest at this time, come on top of tariffs already implemented in 2018.

Moreover, failure to resolve trade differences and further escalation in other areas, such as the auto industry, which would cover several countries, could further dent business and financial market sentiment, negatively impact emerging market bond spreads and currencies, and slow investment and trade.

In addition, higher trade barriers would disrupt global supply chains and slow the spread of new technologies, ultimately lowering global productivity and welfare. More import restrictions would also make tradable consumer goods less affordable, harming low-income households disproportionately. This type of scenario is among the reasons why we referred to 2019 as a delicate year for the global economy.

This article is a reprint from the IMFBlog published at https://blogs.imf.org/2019/05/23/the-impact-of-us-china-trade-tensions/.