The Unintended Consequences of Regulation: Evidence from China’s Interbank Market

Financial regulation can have unanticipated consequences in the financial system. The evidence from China’s interbank market shows that banks tend to use newly introduced and lightly regulated financial instruments to get around regulation during their search for funds. Banks facing greater competition or higher liquidity shortages have more incentives to engage in such activities. Such interbank activities are closely associated with banks’ proprietary trading, suggesting the potential risk of financial contagion. 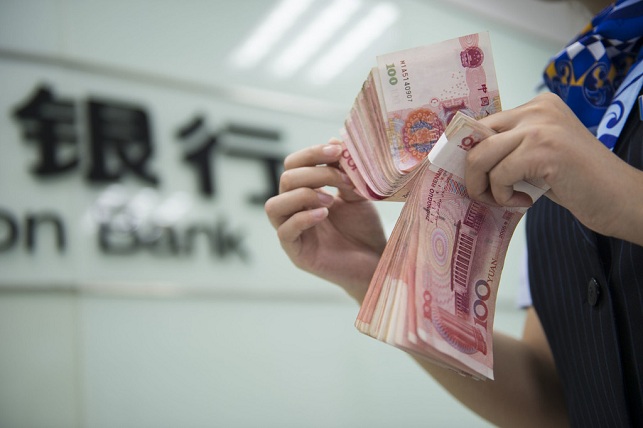 Financial regulation can have unintended consequences. Bank-like activities can take place outside of the traditional deposit-taking financial institutions due to regulatory changes (e.g. Adrian and Ashcraft, 2016; Buchak et al., 2018; Hachem and Song, 2017), which could further lead to contagion or potential systemic risks in the financial sector (Allen and Gu, 2018). Understanding the channels through which the regulation triggers contagion or systemic risks is key to policy-making in the financial sector. Recent rapid growth in China’s shadow banking and interbank markets serve as a unique environment for understanding how the banking sector responds to regulation changes and develops off-balance sheet activities driven by regulatory arbitrage, as well as how such effects can spill over to other subsectors of the financial system.

China’s shadow banking sector has dramatically expanded since the 2008 global financial crisis and China’s subsequent RMB four-trillion stimulus plan (Chen, He and Liu, 2018; Acharya, Qian and Yang, 2018). Reasons for the rapid rise of China’s shadow banking sector have been at the center of the debate among policy makers and academics (e.g. Allen et al., 2018). Prior to the recent rise in shadow banking activities, China’s interbank market was dominated by traditional borrowing and lending activities as well as an interbank bond market (Amstad and He, 2019). In December 2013, interbank negotiable Certificate of Deposits (NCDs) were introduced by the People’s Bank of China (PBC), originally to provide additional baseline interest rates and further improve the pricing mechanism in the interbank market. All trading members of the National Interbank Funding Center can issue NCDs to raise funds in the interbank market. Since mid-2015, both nonfinancial corporations and individuals have been allowed to invest in NCDs.

In order to regulate shadow banking activities, authorities have imposed different regulations, such as Doctrine 8 in 2013 and Doctrine 127 in 2014. Doctrine 8 limited bank wealth management products (WMPs) to investing a maximum of 35% of their assets in non-standard debt assets. Doctrine 127 mainly regulated interbank activities, and limited interbank liabilities, including interbank deposits, interbank loans, and financial assets under repo/reverse repo, to no more than one-third of the bank’s total liabilities. Doctrine 127 was initially targeted at curbing the fast rise of shadow banking given that financial assets under repo/reverse repo were used by shadow banking entities (e.g. trust companies) to facilitate their activities. However, the regulation of newly introduced NCDs lagged, as Doctrine 127 did not count interbank NCDs as interbank liabilities on the balance sheet. As a result, the regulation loophole allowed small- and medium-sized banks (SMBs), and especially a number of city commercial banks (CCBs) and rural commercial banks (RCBs) with liquidity shortages, to search for funds and issue high volumes of NCDs in the interbank market. Then these banks also channeled the funds raised through the interbank market into other financial instruments (e.g., WMPs, NCDs issued by other banks with longer maturity periods or higher yields) in the interbank market or into the bond market. An additional benefit of borrowing from and reinvesting in interbank NCDs or WMPs is the increase in total bank assets to satisfy quarterly examination by the authorities. 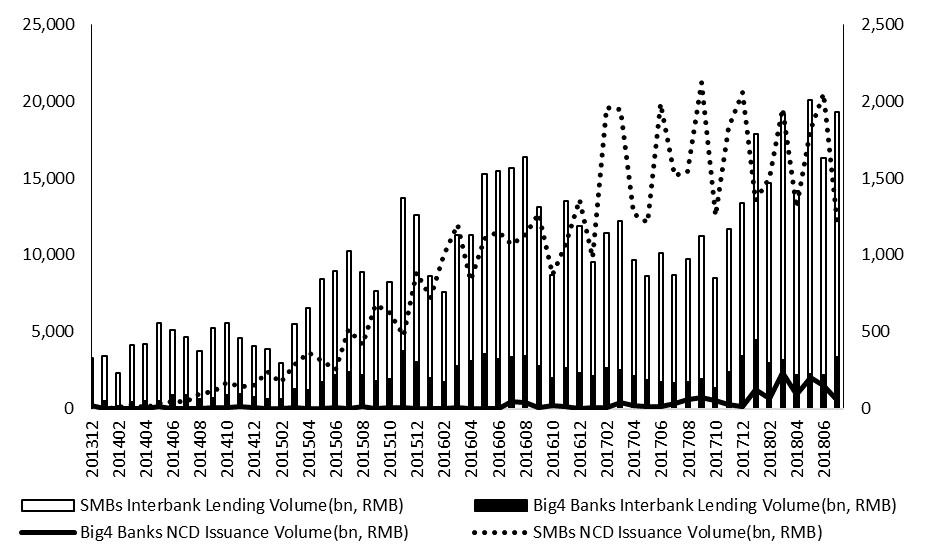 In a recent paper (Gu and Yun, 2019), we use the recent fast-growing interbank NCD and interbank WMP markets to examine how regulation changes can generate arbitrage across subsectors of the banking system and how such risks can be transmitted to capital markets.

Our empirical finding suggests that the launch of the interbank NCD market accompanied by other financial regulation policies has been used by banks for regulatory arbitrage across different sectors, and such effects are more significant for banks with tighter liquidity conditions. Specifically, we find that for non-Big 4 banks, banks with higher loan-to-deposit ratios (LDRs) (Figure 2) are more likely to search for liquidity by issuing lightly regulated and newly introduced financial instruments such as interbank NCDs. Figure 2 shows that with the lift of the LDR cap which was set at 75%, shareholding banks have experienced highest growth in loan issuance relative to deposits. 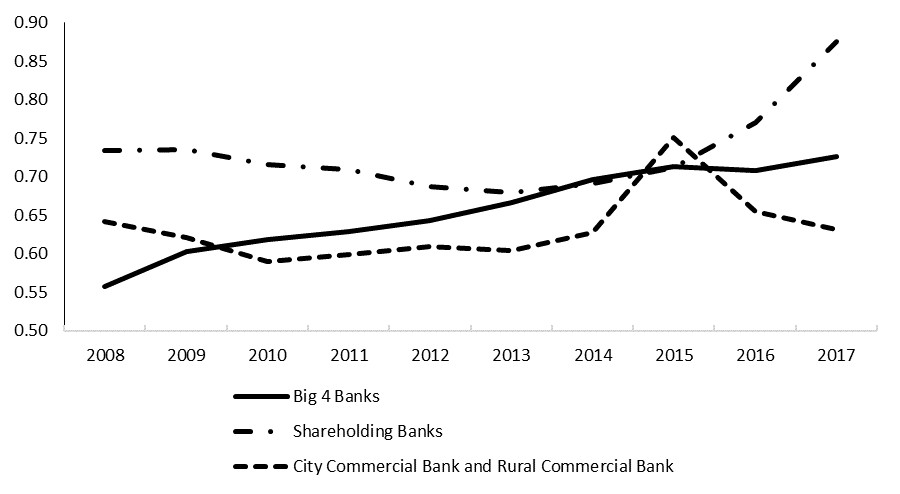 
Since the elimination of the ceiling of the floating range of deposit interest rates (through so-called “interest rate liberalization”), smaller banks have been facing greater competition from their peers and from the Big 4 banks. We find that after the interest rate deregulation, banks that face more competition have been engaging more heavily in the issuance of interbank NCDs and WMPs, which can be both regarded as shadow-banking related activities, and that this association is stronger and more significant when liquidity conditions are tight in the interbank market. The economic consequence is also significant—the rise of interbank activities through the NCD market is also associated with worse bank performance. 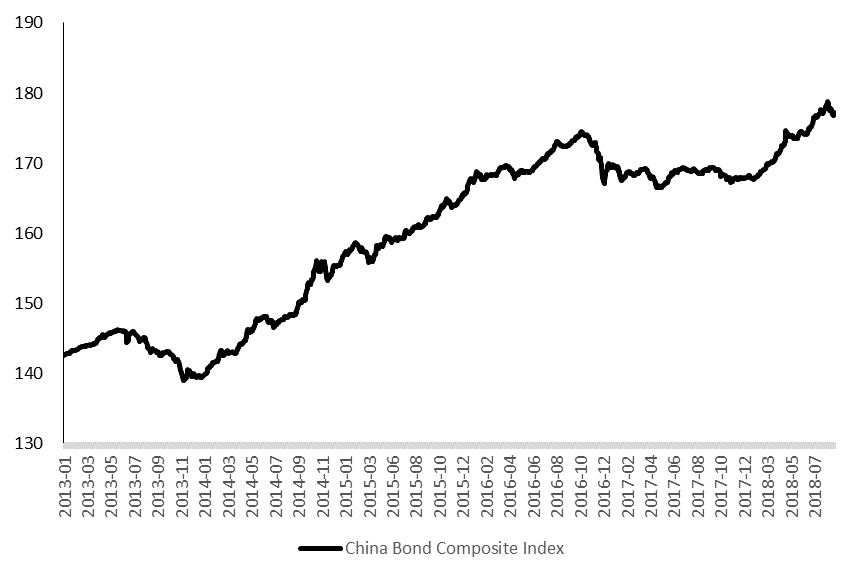 
In addition, in Gu and Yun (2019), we show that banks’ involvement in shadow-banking- related interbank activities is highly correlated with banks’ proprietary trading. SMBs that have engaged more in the issuance of interbank NCDs and WMPs have invested more in the bond market through proprietary trading. Banks with lower Tier 1 capital ratios tend to invest more in the bond market. Consequently, the bond market experienced corrections and bond yields increased dramatically in 2016 and 2017 (Figure 3), suggesting that more shadow-banking-related interbank activities may create additional risks in capital markets through banks’ proprietary trading. Such associations across different sectors of the financial system indicate the potential risk of contagion in the financial system.