Zombie firms are insolvent firms that continue to operate due to continued access to financing at extremely low costs. Nie et al. (2016) find that in the year 2013 about 14 percent of Chinese-listed firms and 7.5 percent of Chinese manufacturing firms are defined as zombie firms. The large amount of financing subsidies distributed to insolvent zombie firms causes a great deal of credit misallocation and impedes the availability of financing for normal firms in China. Based on a Chinese patent application database and an above-scale manufacturing firm database, we find that zombie firms significantly reduce the number of patent applications and total productivity factors (TFPs) of normal firms. For a 1 percent increase in the proportion of zombie firms in the same industry, the total number of patent applications of normal firms decreases by 1 percent, among which the number of invention-type patent applications decreases by 0.5 percent and the TFPs of normal firms decrease by 2.41 percent. The crowding-out effect of zombie firms on innovation is both statistically and economically significant. In terms of the mechanisms, empirical results show that the crowding-out effect is more profound for industries highly dependent on external financing, highly concentrated industries, and non-state-owned normal firms, which are more financially constrained compared to state-owned normal firms. This implies that the crowding-out effect of zombie firms works by distorting credit allocation and harms fair industry competition. This paper highlights the importance of solving the problems caused by zombie firms in order to boost firm innovation and help achieve high-quality development in China. 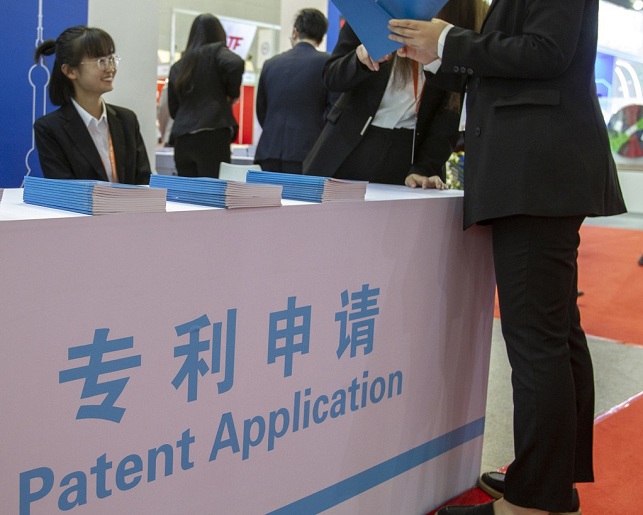 Under the “new normal” of China’s economy, innovation has become imperative for achieving high-quality development. The Chinese government regards the dissolution of zombie firms as an important starting point for improving the quality of the supply side of the economy. Based on the reform background of deleveraging state-owned enterprises (SOEs), this paper studies how “zombie firms” (insolvent firms that continue to operate due to continued access to financing at extremely low costs) influence the innovation outcomes of other firms, specifically by their distortion of credit allocation and product market competition. It also provides empirical support for the current focus in China of seeking “high-quality development.”

Zombie firms account for a substantial part of the Chinese market. Nie et al. (2016) find that in the year 2013 about 14 percent of Chinese-listed firms are defined as zombie firms. Furthermore, the proportion of zombie firms are the highest among SOE firms (about 16 percent for the period of 2005-2013) compared to private firms and foreign firms (about 7 percent during 2005-2013). The prevalence of zombie firms consumes a large amount of financing subsidies and causes a great deal of credit misallocation in China (Tan et al., 2017). Previous studies show that financing accessibility is a key determinant to corporate innovation (Chava et al., 2013; Cornaggia et al., 2015) and it is important to find out how zombie firms affect corporate innovation in China.

Using firm-level data from the above-scale industrial firm dataset provided by the National Bureau of Statistics, this paper empirically tests the impact of zombie firms on the innovation outcomes of normal firms (i.e., non-zombie firms). In particular, we use certain steps to identify the crowding-out effect of zombie firms on the innovation of normal firms. First, in the baseline model, we use firm-, industry-, and city-level control variables to control for the impact of a firm’s own operating performance, industry development, and local economic conditions on corporate innovation and TFP. Since the main explanatory variable is the proportion of zombie firms at the industry level, all regression models control for industry fixed effects and standard errors are clustered at both the industry and year level. We also use year fixed effects to control for time trends. The results of the baseline model show that the total number of patent applications and the TFP of firms are significantly and negatively correlated with the proportion of zombie firms in their industry. Second, in order to deal with endogeneity problems such as omitted variables and reverse causality, we follow Tan et al. (2017) and use instrumental variable (IV) regressions to verify the empirical results of the benchmark model. Third, we check for heterogeneous effects based on the ownership of firms, the external financing dependence of the industry, and the degree of industry competition. Subsample regressions show that the crowding-out effect of zombie firms on the innovation of normal firms is more profound for non-SOEs, firms in industries with high external financing dependence, and firms in highly concentrated industries. This implies that zombie firms influence the innovation outcomes and the TFP of normal firms by distorting credit allocation and industry competition.

Table 1 reports the IV regression results of firm-year observations of innovation outcomes on the proportion of zombie firms in the same industry as the concerned firms in the same year. Following Tan et al. (2017), we use the product between the proportion of SOE firms at the beginning of the sample and the average leverage ratio of the SOE in the last year as the instrumental variable (IV). As zombie firms are most prevalent among SOEs and those firms consume a lot of credit resources, this IV can satisfy both the relevance and exclusion conditions (Tan et al., 2017). All regressions control for firm-, industry-, and city-level controls, include industry and year fixed effects, and cluster the standard error estimation at the industry level. The empirical results show that zombie firms significantly reduce the number of patent applications and the total factor productivity (TFP) of normal firms in the same industry. If the proportion of zombie firms in an industry increases by 1 percent, then for normal firms in the same industry, the total number of patent applications will decrease by 1 percent, the total number of invention patent applications will decrease by 0.5 percent, and TFP will decrease by 2.4 percent. These effects are both statistically and economically significant.

Moreover, the crowding-out effect of zombie firms influences normal firms through multiple channels. We investigate two of these potential channels. The first is the credit misallocation channel. Since industry diversification is a strategy adopted by banks to reduce excess exposure to industry risk, credit distributed to zombie firms in an industry would crowd out the credit available to normal firms in that same industry. A second potential channel is the distorted market competition channel. Financing subsidies enable zombie firms to finance their investment at a much lower cost, thus giving them an unfair advantage when competing against normal firms. Such distorted market competition forces normal firms to focus on short-term survival objectives instead of a long-term investment in order to innovate. We use two proxies to test the credit misallocation channel; namely, state ownership and industry dependence on external financing and one proxy for industry concentration (HHI). We use these proxies to test the distorted market competition channel. Table 2 reports the subsample regression results based on corporate ownership, industry dependence on external financing, and industry concentration. All of the regressions are 2SLS IV regressions. As an IV estimation has a larger size distortion than OLS (Young, 2017), we focus on the significance level of the subsample regressions instead of comparing the coefficient magnitudes. Panels A and B show that more resource-constrained firms (non-SOEs) face more significant distortions from zombie firms, as do firms with more external financial dependence and firms in more concentrated industries, thus supporting the credit misallocation channel. Panel C shows that normal firms in more concentrated industries suffer significant reductions in their innovation, while this effect is not significant for firms in less concentrated industries, thus supporting the distorted market competition channel. 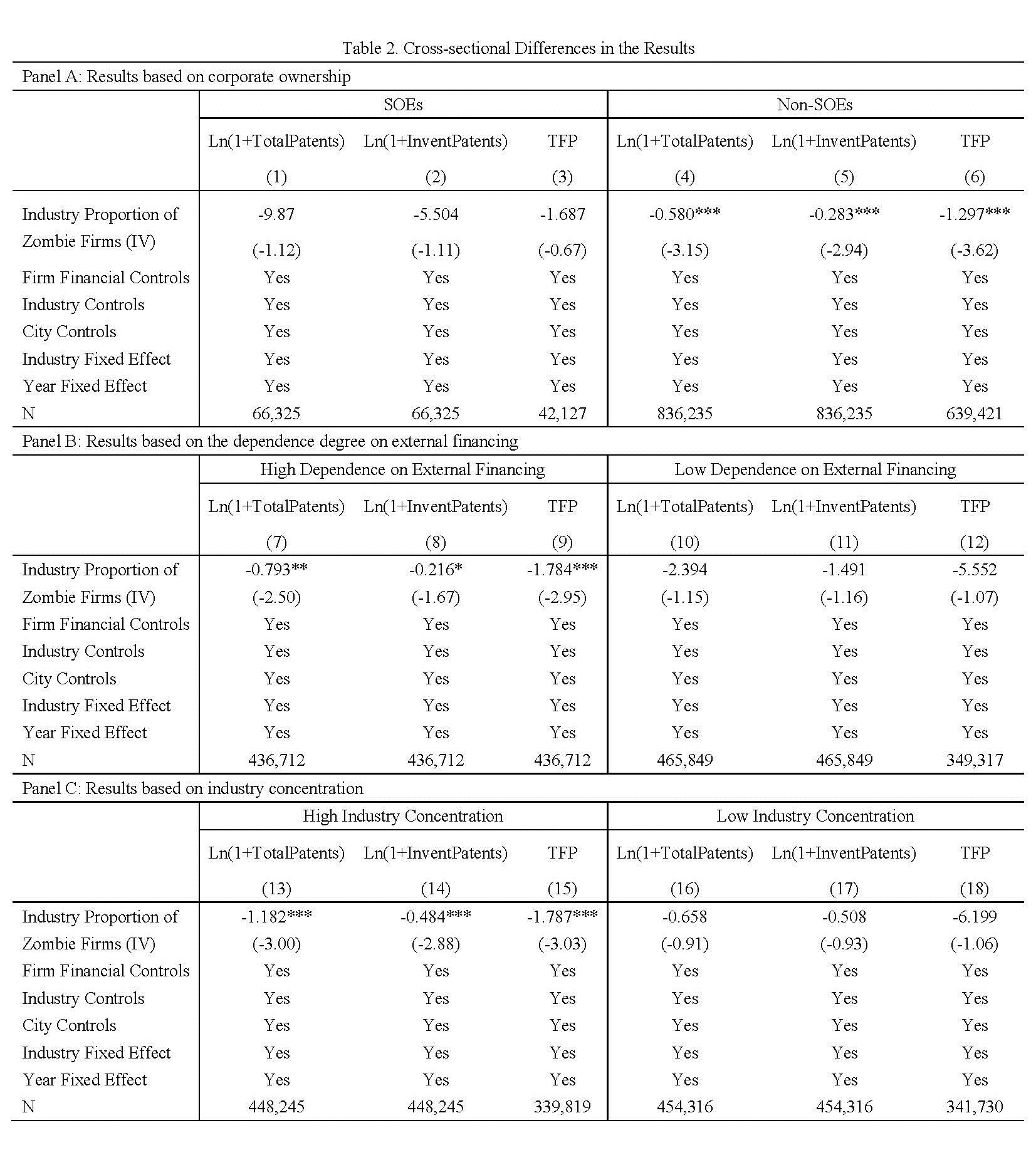