Gender-targeted job ads are common in many emerging economies. Using data from jobboards—which differ substantially in terms of culture, size, and user groups targeted—our empirical evidence suggests that policies that target workers’ application decisions may be at least as important as policies that target employers’ screening decisions, if not more. 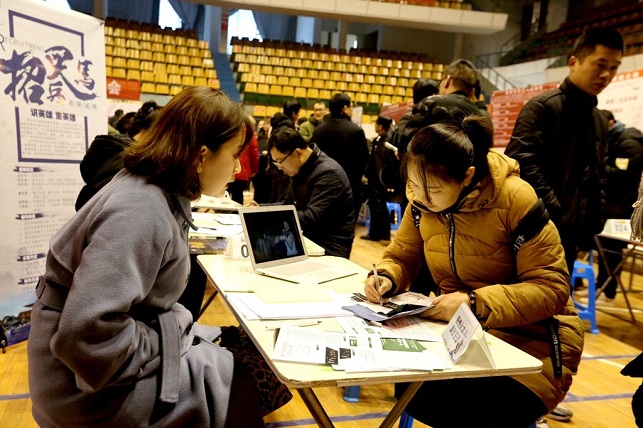 Gender-targeted job ads are common in many emerging economies. This article summarizes several of our recent studies on this subject. We find that explicit gender preferences in job ads 1) favor women about as frequently as men; 2) are much less common in jobs with high skill requirements; 3) vary substantially within firms but less within jobs, and 4) ‘tilt’ strongly towards men as workers get older. Besides employers’ job posting behavior, we have also examined workers’ application behavior and employers’ call-back behavior in the presence of gendered job ads.

There is a huge literature on gender discrimination and inequality in the labor market (i.e., Blau and Kahn, 2017, and Goldin, 2014). While it is undeniable that the job search and matching process plays a pivotal role in gender inequality in the labor market, there have not been many studies from the search-and-matching perspective due to data availability constraints. But the increasing usage of online job boards in the past decade has largely alleviated such constraints. We use online job board data to examine gender targeted job ads in a series of recent studies.

The practice of stating an explicit gender preference in job ads is widely used in emerging economies. In China, the earliest regulation that we are aware of that specifically prohibits gender discrimination by labor market intermediaries is the Ministry of Labor and Social Security’s Regulations on Employment Service and Employment Management issued in 2007. However, enforcement of anti-discrimination laws at that time is widely perceived to have been weak. Gendered job ads largely disappeared from national job boards only after China’s Ministry of Industry and Information Technology issued a regulation aimed directly at gendered job ads on online job platforms in 2016. Nonetheless, in China such ads are still common in many local and smaller job boards. On the other hand, even in countries where gender discrimination is illegal, employers are now able to limit exposure of their job ads to their preferred worker types with the help of targeted advertising (Angwin, Scheiber and Tobin, 2017). Together, these observations indicate that employers’ discriminatory behavior demands continuous attention.

When we examine the labor market at a granular level, the agents in the labor market are obviously not matched with each other randomly. Instead, employers and workers strategically search and match over time through a three-stage dynamic process. First, employers decide on the content of job ads. Then workers decide on the set of jobs for which they apply. Finally, employers decide on the set of workers to interview and hire. In this process, employers’ job posting decisions on whether or not to include an explicit gender preference in the job ads initiates the whole dynamic of gender segregation. The impacts of employers’ gender requests depend on the responsiveness of workers as well as employers’ enforcement at the screening stage.

Here, we shall summarise the main findings of our studies on explicit gender preferences in job ads in terms of patterns, impacts, and mechanisms. A brief discussion of the policy implications of our studies will conclude this article.

Using job posting data from four online job boards, Kuhn and Shen (2013) and Delgado Helleseter et al. (forthcoming) establish four major patterns of employers’ explicit gender preferences:
•    Symmetry: The shares of job ads that request men and women roughly equal each other.
•    Negative skill-targeting: Job ads requesting less education, less experience, and offering lower wages are more likely to express a gender preference. This applies to requests both for men and for women.
•    Job- (rather than firm-) specificity: Whether a job ad requests a man or a woman is more closely linked to the type of work to be done than the identity of the firm posting the ad. In fact, it is common for the same employer to request men for some jobs and women for others.
•    The ‘age twist’: As the desired worker age rises between 18 and 45, employers’ advertised gender requests ‘flip’ from strongly favoring women to strongly favoring men. Figure 1 provides descriptive evidence of such age-twist patterns.


Figure 1 The Age Twist in Gender Preferences in Job Ads 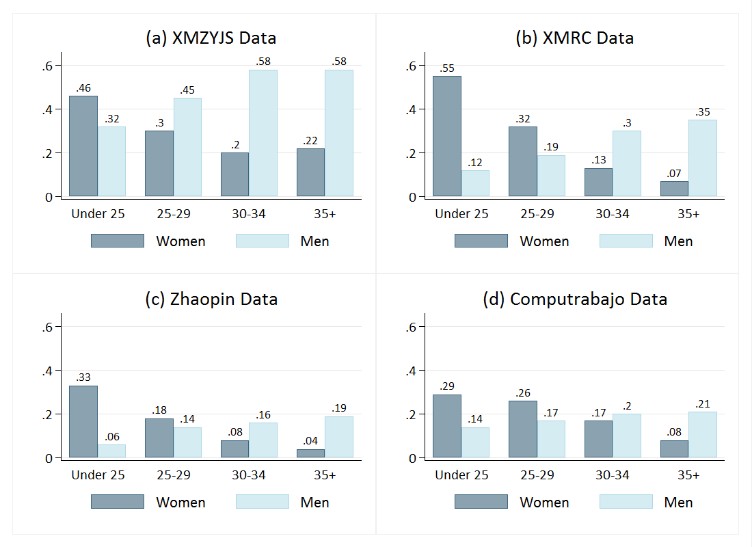 To further understand the age twist in employers’ gender preferences, we use the information contained in job titles as well as nationally representative survey datasets of China and Mexico, and find that:

•    65% of the age twist can be ‘explained’ by age-related changes in the mix of tasks. In particular, employers tend to prefer young women for ‘helping’, customer contact, and administrative occupations, while preferring older men for managerial jobs.
•    Employers’ preferences for young women and employers’ preferences for beauty are strongly, and positively, correlated.
•    Employers’ gender-specific preferences for workers’ marital and fertility status also contribute to the age twist. Specifically, employers prefer single women and women without children, while preferring married men and men with children.

Recently, our research has shifted to the second and third stages of the search and matching process. It is worth noting that workers’ application behavior and employers’ job posting and call back behavior are assumed to depend on each other in our setup. Such assumptions are supported by several empirical studies (i.e., Banfi and Villena-Roldan, 2018, and Niederle and Lise, 2007).

Using internal data provided by XMRC.com, they find that:
•    92.4% of applications and 94.8% of call-backs to gendered job ads are from (for) the requested gender.
•    When considering all job ads (whether or not they have explicit gender preferences), 50-60% of the gender segregation among successful job applicants can be accounted for by job ads’ gender preferences.

Our decomposition exercises further suggest that most of the impact of gender preferences can be accounted for by workers’ application behavior, rather than employers’ call back behavior. While gender-mismatched applicants do suffer from substantial penalties in terms of callback chances, 74% of the observed matching between employer’s gender requests and successful applicants’ gender is due to workers’ self-selection at the application stage.

Since workers may be able to infer job ads’ implicit gender preferences from job titles, we construct indicators of the predicted, or implicit, ‘maleness’ or ‘femaleness’ of the jobs. This is done using machine learning analysis of the words in the job titles. The job titles with the most applications at different levels of predicted maleness and femaleness are presented in Figure 2. As Figure 2 shows, while “front desk clerks” and “big truck drivers” are typically female and male jobs, respectively, in this market, there are also jobs like “credit card account collection” that are often very explicit in their gender preferences but can prefer females in some postings and males in others. On the other hand, jobs like “international trade person” rarely express an explicit gender preference; thus, the predicted ‘maleness’ and ‘femaleness’ of these jobs are both very low. 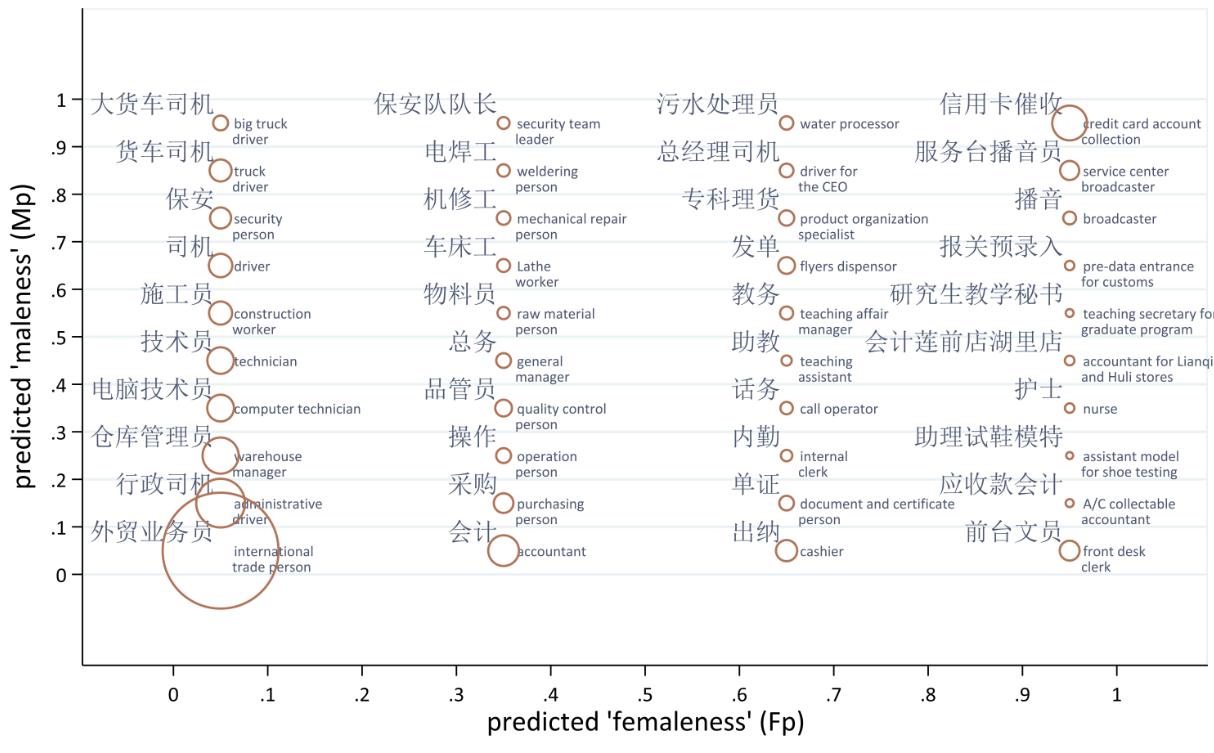 Figure 3. Effects of Gender Requests (F and M) and Predicted Gender (Fp and Mp) on Female/Male Share of Applicants 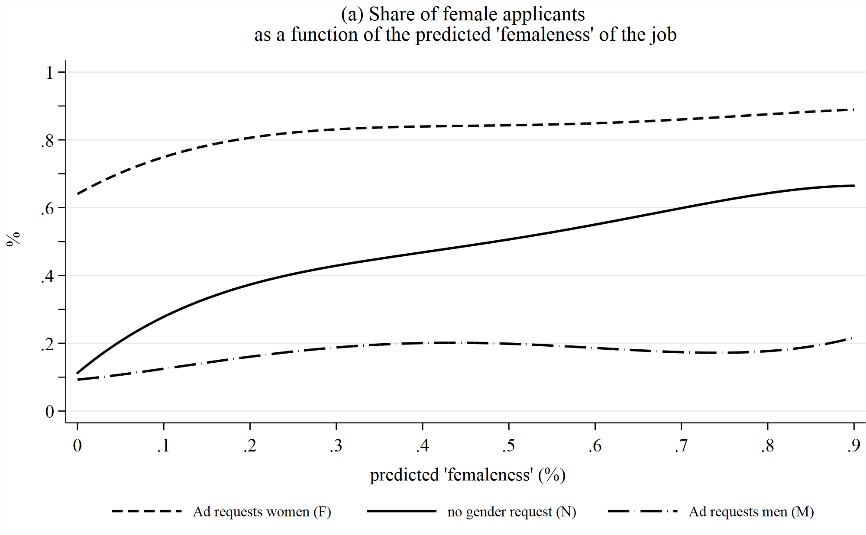 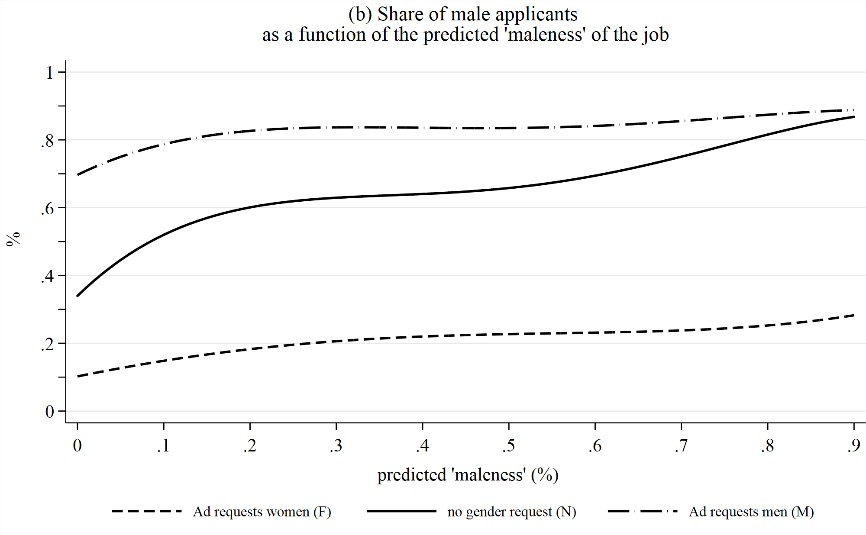 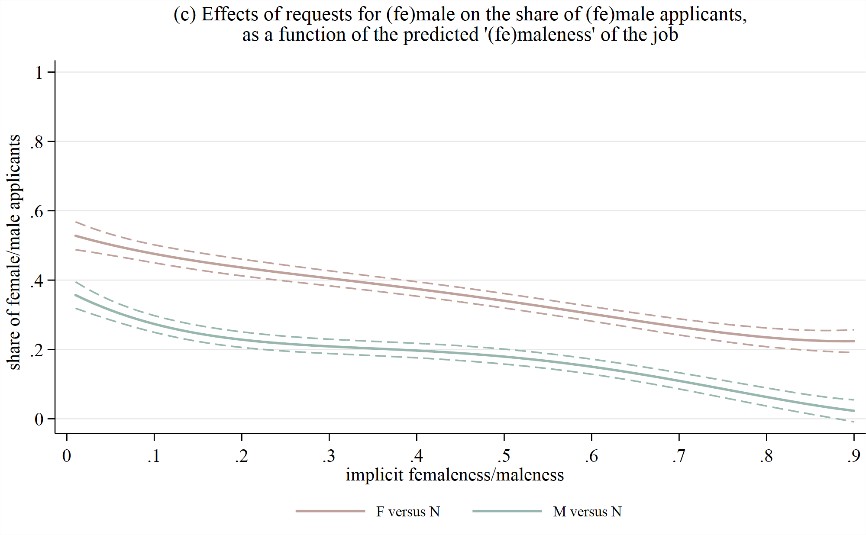 Note: This is Figure 1 of Kuhn, Shen and Zhang (2018). Here, Fp and Mp represent the predicted ‘femaleness’ or ‘maleness’ of the job ads based on job titles. F, N, and M represent job ads with explicit preference for female, none, and male workers, respectively.

Panel (c) shows the predicted effects of attaching an explicit male (female) label to a job ad (relative to an N label) at different levels of implicit maleness (femaleness), with 95 per cent confidence bands represented by dashed lines.

•    Explicit gender preferences are very effective in directing workers’ application behavior [the F and M lines differ from the N lines significantly in both panel (a) and (b)].
•    The impacts of job ads’ explicit gender preferences are stronger when the words in the job titles more strongly suggest the opposite gender for that type of work [the lines in panel (c) are highest when the predicted likelihood for the job to prefer the other gender is highest].
•    Requesting women has a much stronger impact on the female applicant share than requesting men has on the male applicant share [the ‘F versus N’ line is higher than the ‘M versus N’ line in panel (c)]. Relatedly, women are much less likely to apply than men when jobs don’t explicitly request their gender [the ‘N’ line is much lower in panel (a) than in panel (b)].

Our findings suggest the importance of directing workers to apply to certain jobs for gender equality in the labor market. Policies that target workers’ application behaviors are at least as important as policies that target employers’ screening behaviours, if not more.