We explore a tax reform on manufacturing firms in China in order to study the impact of taxes on firm innovation. The reform switched corporate income tax collection from a local to state tax bureau and reduced the effective tax rate by 10 percent. The reform only applied to firms established after January 2002, allowing us to use a regression discontinuity design as the identification strategy. The results show that lower taxes improved both the quantity and quality of firm innovation. Moreover, the reform had a bigger impact on firms that are financially constrained and firms that engage more in tax evasion. 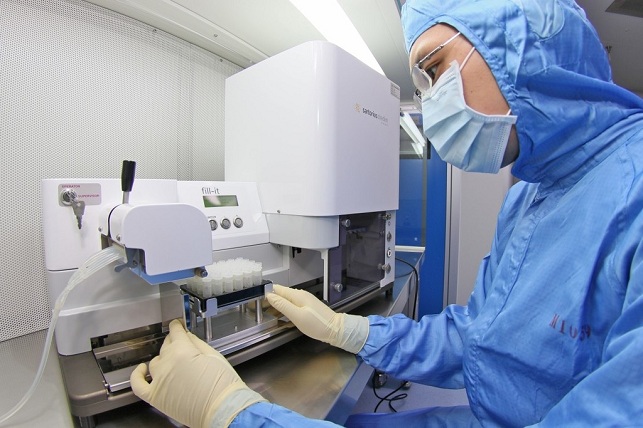 Innovation has been increasingly recognized as the main engine for economic growth (Romer, 1990; Aghion and Howitt, 1992; Aghion, Akcigit, and Howitt, 2014). To escape the middle-income trap, China’s government launched various policies to stimulate research and development (R&D) activities (Chen et al., 2018). However, we know very little about its impact of such policies on firm innovation and the underlying mechanisms (Ufuk et al., 2018; Djankov et al., 2011).

Theoretically, taxes can have either positive or negative impacts on firm innovation. On the one hand, lower taxes can increase the after-tax profit of firms, so that they have a better capacity to invest in new technologies or products. Moreover, lower taxes may reduce the resources that firms spend on tax evasion, such as the cost of bribing tax officers, which can be instead used on innovation activities. On the other hand, lower taxes may also have a negative impact on innovation because they decrease government revenue, and in turn may reduce government spending on public goods such as research, education, and infrastructure. As a result, it is unclear whether tax incentives improve firm innovation.

In this study, we investigate the impact of taxes on firm innovation using a natural experiment in China. In November 2001, China implemented a tax collection reform on all manufacturing firms established on or after January 2002, which switched the collection of corporate income taxes from a local tax bureau to a state tax bureau. After the reform, firms established before 2002 paid very different effective tax rates than firms established after 2002 due to the differences in the management of and incentives offered by the two types of tax bureaus. Figure 1 shows that the reform changed the enforcement of tax collection, resulting in a reduction of effective corporate income tax rates by almost 10 percent among newly established firms. Since firms registered before 2002 were not affected by the reform, the policy change created exogenous variations in the effective tax rate among similar firms established before and after 2002. We can thus apply a regression discontinuity design (RD) and use the generated variation in the effective tax rate to identify the impact of taxes on firm innovation. 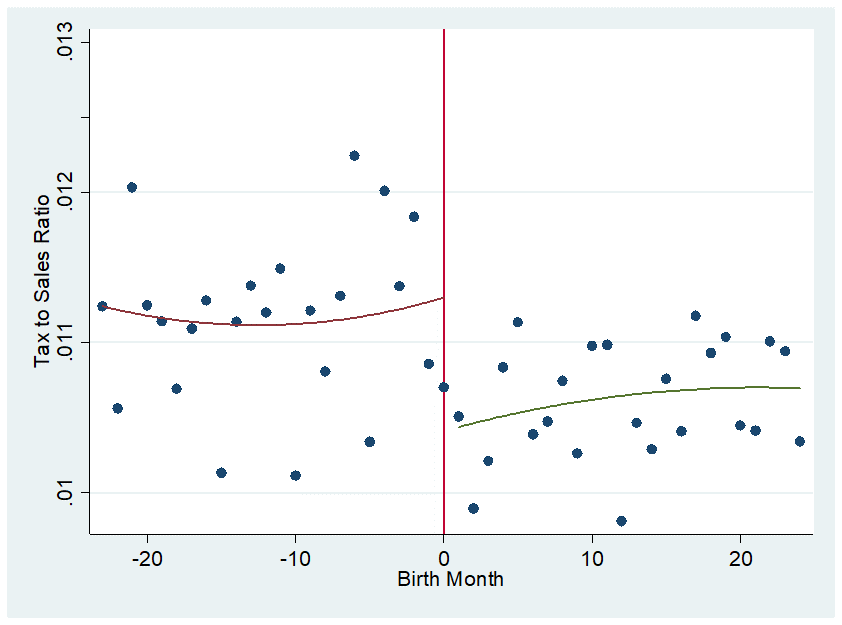 Note: This figure is based on data in the year 2007 and compares the effective tax rate (defined as corporate income tax to sales ratio) paid by firms established before and after the policy change. The birth month of firms established in January 2002 is normalized to 0.


To test the impact of taxes on innovation, we combine a comprehensive dataset of all medium and large enterprises in China in business between 1998 and 2007 with patent data from the State Intellectual Property Office (SIPO) including all patents applied for in China by the year 2014. We use the data to measure three dimensions of innovation activities: input (R&D expenditure and skilled labor ratio), output (number of patent applications), and quality (type and characteristics of patent application).

The key assumption of the RD analysis is that a firm cohort should have a significant impact on the effective corporate tax rate; however, all other unobserved determinants of firm innovation are not correlated with the firm cohort. We provide three pieces of evidence to validate the estimation strategy. First, the reform significantly reduced the effective tax rate: the tax rate is almost 10 percent lower among firms established after 2002 compared with those registered before 2002. Second, there is no significant difference in firm entry around 2002, suggesting that the reform was a surprise to firms and they did not selectively postpone their registration date. Third, there is not a significantly higher rate of firm re-registration after 2002.

Note: This figure is based on data in the year 2007 and compares the number of patent applications (weighted by firm size) by firms established before and after the policy change. Birth month of firms established in January 2002 is normalized to 0.

Second, in principal, a lower effective tax rate may also release resources that firms spend on tax avoidance, which firms can in turn use on innovation. To test this potential channel, we follow Cai and Liu (2009) to measure tax evasion activity and find firms that are involved in more tax evasion and can therefore release more resources for innovation after the reform.

This paper contributes to the existing literature in several ways. While there are a growing number of papers studying the impact of taxes on firm decision-making, we are among the first to analyze the effect of corporate taxes on firm innovation in China. More importantly, we are the first paper to look at the impact of the changes in tax enforcement rather than the explicit tax reduction on firms’ innovation behavior. This paper also contributes to the literature on tax enforcement. The tax-to-GDP ratio is substantially lower in poor countries compared with developed countries. One important reason for low tax revenue is weak tax enforcement. Our study adds to the tax enforcement literature by showing that the management of and incentives offered by tax collection agencies play an important role in tax enforcement and the tax capacity of a country.