Who Captures the Power of Pen?

The media play important roles in capital markets as both an information intermediary and a corporate monitor. However, evidence for these roles is largely limited to a particular type of media: market-oriented media (i.e., outlets controlled by private owners). Given that nearly 86% of the world’s population receives information from the other type of the media—state-controlled media (i.e., outlets controlled by the government)—the question arises of whether these two types of media perform different roles. A recent scandal concerning the 21st Century Business Herald (21世纪经济报道), the largest Chinese market-oriented business newspaper, which was accused of blackmailing listed firms by threatening negative coverage, highlights the importance of this question. In our recent study (You, Zhang, and Zhang, 2018), we attempt to address the question of different roles by examining how state-controlled and market-oriented media perform their informational and corporate governance functions differently with respect to the stock market.

Relying on the unique media market in China, our study is among the first to make this comparison. Furthermore, consistent with cross-country evidence that state-controlled media ownership impairs economic development and credit allocation efficiency (Djankov et al. 2003; Houston, Lin, and Ma 2011), we contribute to the literature by directly identifying operating inefficiency and political control as two critical obstacles inherent to state-controlled media.

The four state-controlled newspapers were founded by newspaper offices, which are nonprofit organizations directly owned and controlled by the government. For example, China Securities Journal (中国证券报) is a national securities newspaper founded in October 1992 and owned by Xinhua News Agency (新华社), which is subordinate to the State Council and reports to the Communist Party of China’s Propaganda and Public Information Departments. The China Securities Regulatory Commission (中国证监会) has designated these state-controlled newspapers as the outlets through which publicly listed firms should disclose news. When collecting news reports from the state-controlled newspapers, we focus only on those written by journalists. That is, we exclude media releases from firms because they represent rebroadcasts and do not contain any new information.

The four market-oriented newspapers are either owned or controlled by financial institutions, public companies, or wealthy individuals. None of these financial institutions and public companies are directly owned or controlled by the government. All the market-oriented newspapers have profit-driven objectives. For example, 21st Century Business Herald (21世纪经济报道) was founded in 2000 by Southern Media Group (南方报业集团) and is jointly owned by a public investment company, Fosun Group (复星集团), which is listed on the Hong Kong Stock Exchange.

To measure media coverage characteristics, we manually read 210,199 news articles and record whether a news article’s tone toward a firm is positive, neutral, or negative. In addition, we construct a word list to identify whether a word is positive or negative in terms of tone and definite or ambiguous in terms of accuracy. For each article, we calculate the proportion of negative words, the proportion of definite words, the proportion of ambiguous words, and the log of the total number of words. For the sake of convenience in presentation, we multiply the proportion of different types of words by 1,000. To measure the timeliness of media coverage, we focus on accounting fraud as a specific type of event and calculate the log of the number of days between the actual starting date of fraud and the reporting date of a news article. At the firm level, we count the number of positive and negative articles over each fiscal year and use the difference between the numbers of positive and negative articles scaled by the total number of news articles reported by each type of media as the key measure of the tone of media coverage. 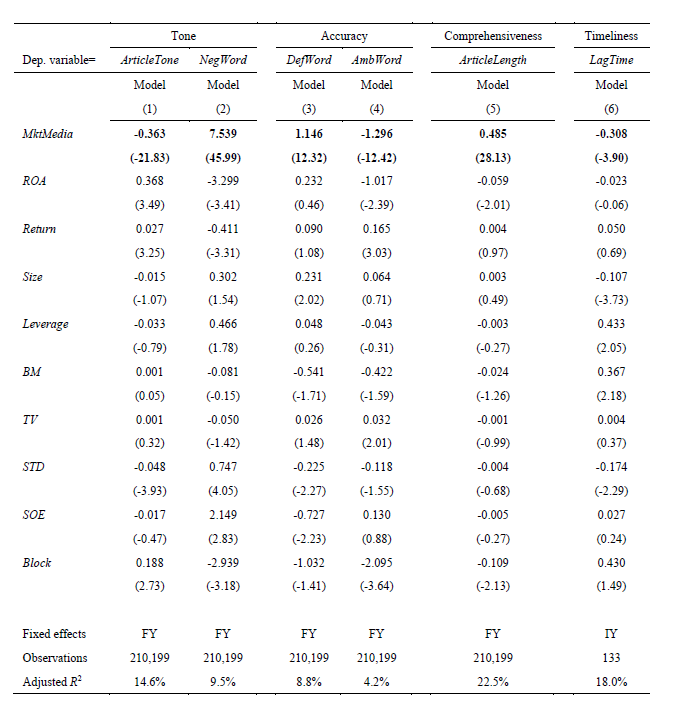 This table presents the panel regression of article characteristics on the dummy variable for the market-oriented media (MktMedia) and firm-level control variables (X), as well as unreported firm (industry) and year fixed effects (FY or IY). The regression model is

To disentangle the causal impact of the media on corporate governance, we present three anecdotal cases for both the market-oriented media and the state-controlled media in China.

Plasticizer scandal of Jiugui Liquor Co Ltd (酒鬼酒公司): On 19 November 2012, a news report from 21st Century Business Herald (21世纪经济报道), one of the four market-oriented media outlets in this study, uncovered that Jiugui liquor (酒鬼酒), made by one of China’s largest liquor makers, Jiugui Liquor Co Ltd (酒鬼酒公司), contained an excessive amount of plasticizer, which can cause serious damage to human immune and reproductive systems. The news report led to a halt in the trading of Jiugui (酒鬼酒公司)’s shares, and the share price of Jiugui Liquor Co Ltd (酒鬼酒公司) dropped by 36% within four days of the disclosure. CEO Xinguo Wang (王新国), CFO and Vice CEO Jun Wang (王俊), and a few other top executives resigned two months after the scandal broke. All the state-controlled media had a delayed reaction regarding this scandal.

Tainted milk scandal of Sanlu Group Co Ltd  (三鹿集团) : In September 2008, Sanlu Group (三鹿集团), one of the largest dairy producers in China, was found to be selling baby formula laced with an industrial additive called melamine, which made 294,000 babies ill and killed six infants. Even after repeated complaints from consumers, the Chinese government restated that Sanlu’s baby formula met the applicable standards. A news report about this scandal surfaced only after Lanzhou Morning Post (兰州晨报), a market-oriented newspaper based in Gansu province, blew the whistle. Within one week of the news report, Sanlu (三鹿) initiated a recall of all its milk products. Three months later, Sanlu (三鹿) declared bankruptcy and the trial of its CEO Tian Wenhua (田文华) began. On 22 January 2009, Tian was sentenced to life imprisonment and fined $2.9 million, and other executives received sentences of five to fifteen years.

These three events show that the market-oriented media play a significant role in monitoring firms’ products, performance, and financial statements, whereas the state-controlled media, according to our findings, have no such effect.

To understand the superior information role of market-oriented media, we perform a subsample analysis and find that the market-oriented media play stronger informational and monitoring roles than the state-controlled media, especially with respect to firms with higher information processing costs or those under more severe political control from the government. To obtain additional support from first-hand sources, we conducted phone interviews with 53 journalists from 20 media outlets, as well as an online survey with 372 university students majoring in communication and media studies. The responses of these journalists and students are in line with our findings from the empirical analysis. 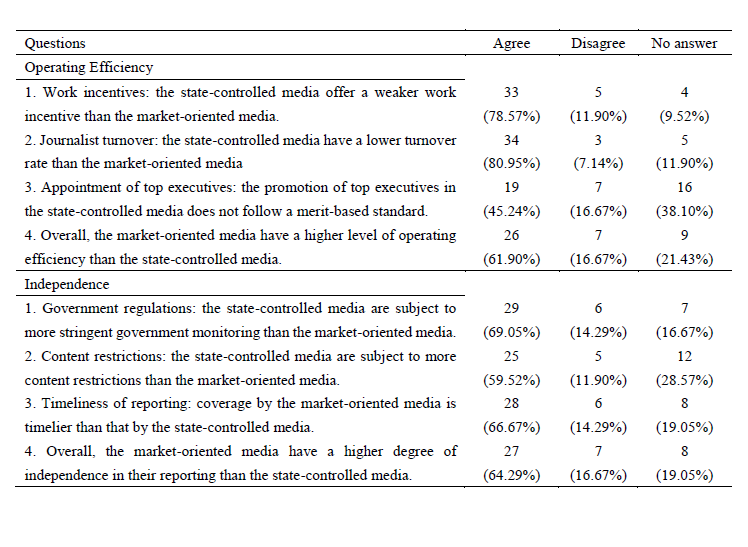 This table presents information collected from phone interviews with journalists. We contacted 53 journalists from 20 media outlets, including newspapers, television stations, and Internet media. Of the 53 journalists, 11 declined our interview request. For the remaining 19 journalists, we conducted phone interviews lasting, on average, 30 minutes. We report these interviewees’ answers to our questions related to the operating efficiency and independence of the media.

In summary, we find that news reports from the market-oriented media are of higher reporting quality, result in a greater price impact, and provide more information about firm fundamentals compared with those from the state-controlled media. Moreover, negative coverage by the market-oriented media has a significant impact on the likelihood of forced executive turnover and other corporate governance outcomes, whereas negative coverage by the state-controlled media does not have the same impact. The results from subsample analyses and phone interviews with journalists suggest that both efficiency and independence contribute to the superior roles of the market-oriented media.