How the Internet Changed Chinese Exports before Ali Baba Came

The roll-out of the internet in China boosted firms’ exports and overall performance even before the rise of broadband and major e-commerce platforms. This finding is relevant for the many developing countries trying to strike a balance between widening access to basic internet services and deepening it through the creation of broadband networks and connections to major e-commerce platforms.

One important channel through which the internet can boost growth is by stimulating international trade. Poor information and costly communication are barriers to trade. Relatively few firms export, especially in developing countries, because it is too costly to find out about opportunities abroad and too difficult to contact consumers and suppliers. The internet changes that. By dramatically reducing the costs of information and communication, it empowers more firms to sell new products to new destinations (World Bank, 2016).

Recent work has focused on the role of major e-commerce platforms in facilitating firms’ exports (Hortaçsu et al., 2009; Chen and Xu, 2015) and of broadband internet in boosting firms’ productivity (Akerman et al., 2015). China, however, had already experienced a dramatic expansion of the internet throughout the country after the late 1990s, whereas broadband and major internet platforms began to be widely available only after about 2007. The period of the early 2000s provides a unique opportunity to study the impact of the internet on firms’ exports and overall performance. This column shows that access to the internet boosted firm-level exports and performance in China even before the roll-out of broadband and the expansion of eBay or Alibaba in China (Fernandes et al., 2017).


Figure 1: Number of Internet Users per Capita across Chinese Provinces, over time 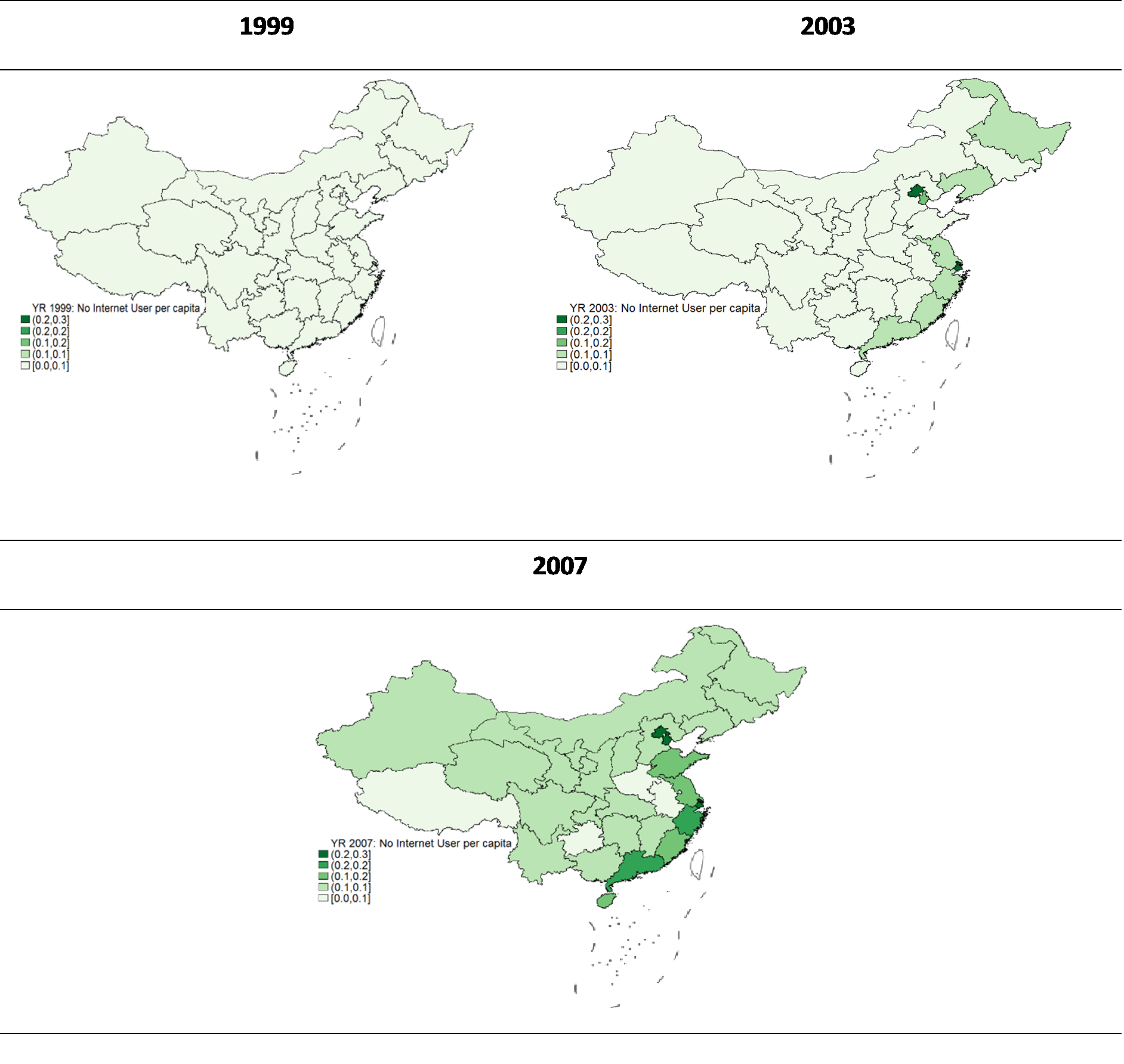 
Figure 2: Number of Manufacturing Exporting Firms per 1,000 Inhabitants across Chinese Provinces, over time 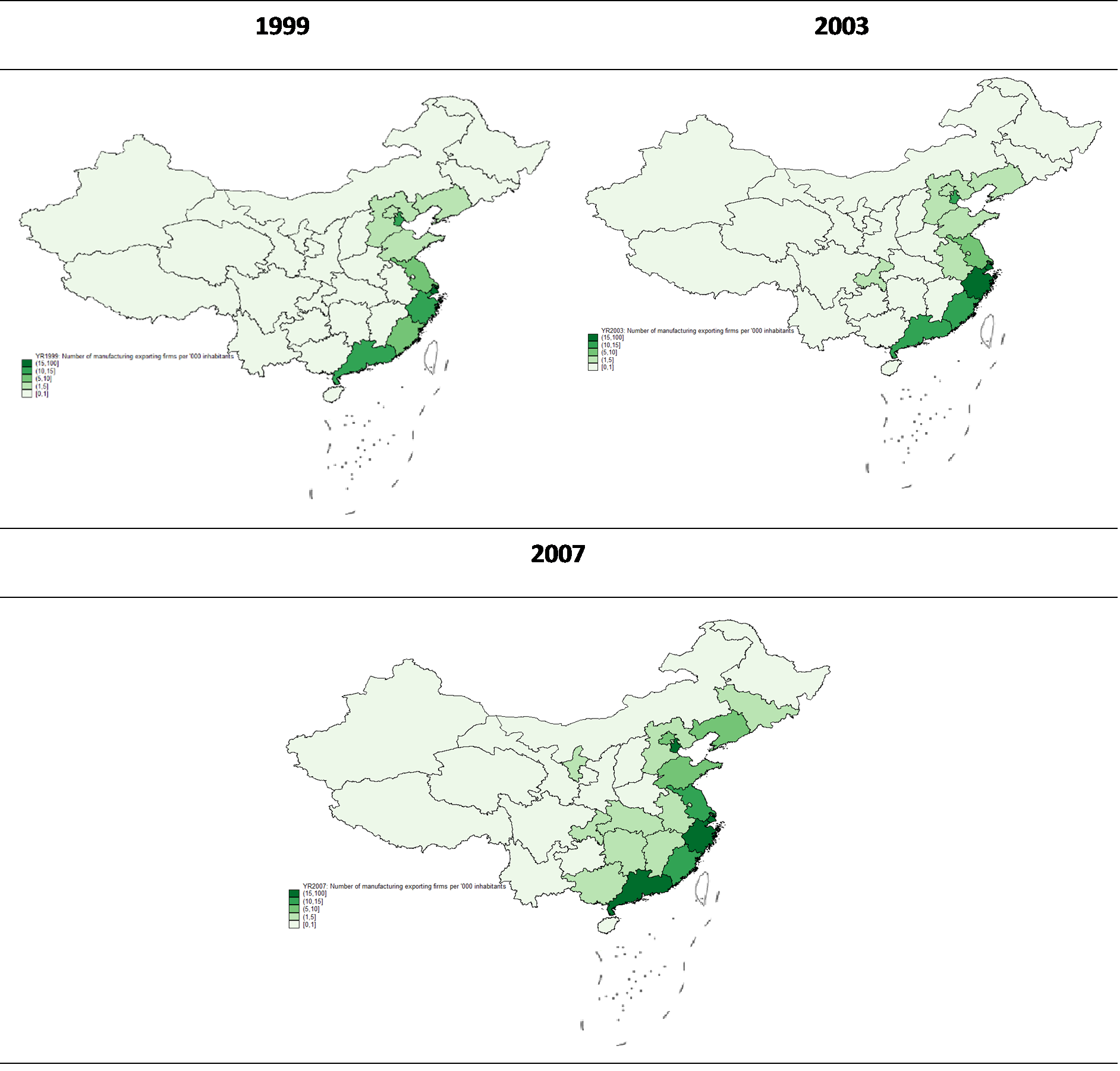 The unprecedented scale and speed of internet roll-out in China

The scale and speed of the internet roll-out that started in the late 1990s in China was unprecedented. The total number of internet users in China increased from about 680,000 in 1999 (or 0.7 per hundred people) to 137 million by 2007 (or 16 per hundred people), one of the most rapid increases in internet penetration in the world. The increase was across all provinces but was stronger in coastal areas in the earlier years and in several inland provinces in later years (Figure 1).

The growth of real exports seems to have followed a similar pattern (Figure 2). While export growth was driven by many factors, could the improved access to the internet have also played a role? We follow an empirical strategy that can identify a causal impact of the internet roll-out on firms’ export performance.

The role the internet played in stimulating Chinese exports

We combine firm-level manufacturing census data with data on province-level internet penetration in China from 1999 to 2007. Our econometric strategy is based on the hypothesis that increases in internet penetration in a province lead to larger benefits for firms operating in industries that rely more intensively on the internet for the business opportunities.

Guided by economic theory, we consider different measures for the internet intensity of industries drawing on industry- and firm-level data from the United States and China. We test whether the effect of provincial internet penetration is stronger for exports of firms in industries that are more reliant on the internet while controlling for fixed and time-varying unobserved provincial and firm attributes. The econometric specifications thus control for any contemporaneous changes and economic shocks in other province-level factors that could influence firms’ export behavior, such as investments in transportation infrastructure, and for unobserved differences across firms.

We find that within-firm export performance over time improved due to the increases in internet penetration in the firm’s province. Growth in the number of internet users per capita in a province raises the probability that a firm participates in export markets, increases firms’ real exports, and the export-output ratio. Specifically, we find that a one standard deviation change in the log of the provincial number of internet users per capita is associated with a 0.4 percent increase in the firm likelihood of exporting and a 0.08 increase in firm log real exports, for firms in an industry with the average intensity of internet use.

How the internet helped

To determine which economic mechanism(s) explain the strong impact of the internet on firms’ export performance in China—even before the roll-out of broadband or major e-commerce platforms—we focus on three questions: what aspects of firm performance were affected, what types of firm communication were facilitated, and what dimensions of the new communication medium were relevant?

First, provincial internet penetration did not just enhance firm exports but also overall firm performance. Firms in China are not simply re-orienting their output to export markets but are increasing the scale of their production. The internet augments firms’ real output supported by increases in both employment and labor productivity. The effects on firm total factor productivity (TFP) are somewhat less robust, suggesting that labor productivity growth is also driven by capital deepening.

Second, the impact of the internet is stronger in more communications-intensive industries that produce differentiated goods, as well as in those that rely on a larger share of differentiated intermediate inputs. This finding is consistent with the hypothesis that the internet facilitates firms’ communication with both their customers and their input suppliers.

Third, establishing a visible virtual presence has led to substantial benefits: the increased availability and use of online services in a province leads to a bigger boost in export outcomes for firms in industries more reliant on having an online presence. These benefits were enhanced by, but not contingent on, access to broadband, approximated by the availability of fiber optic cables in the provinces.

Hence, the internet boosted exports on the back of gains in the scale and efficiency of production, by facilitating more efficient and intensive communication channels between firms and their customers and their input suppliers. These benefits had arrived before, but were probably magnified by, other developments, such as the emergence of Alibaba as a widely used, large-scale e-commerce platform and eBay’s expansion in China.