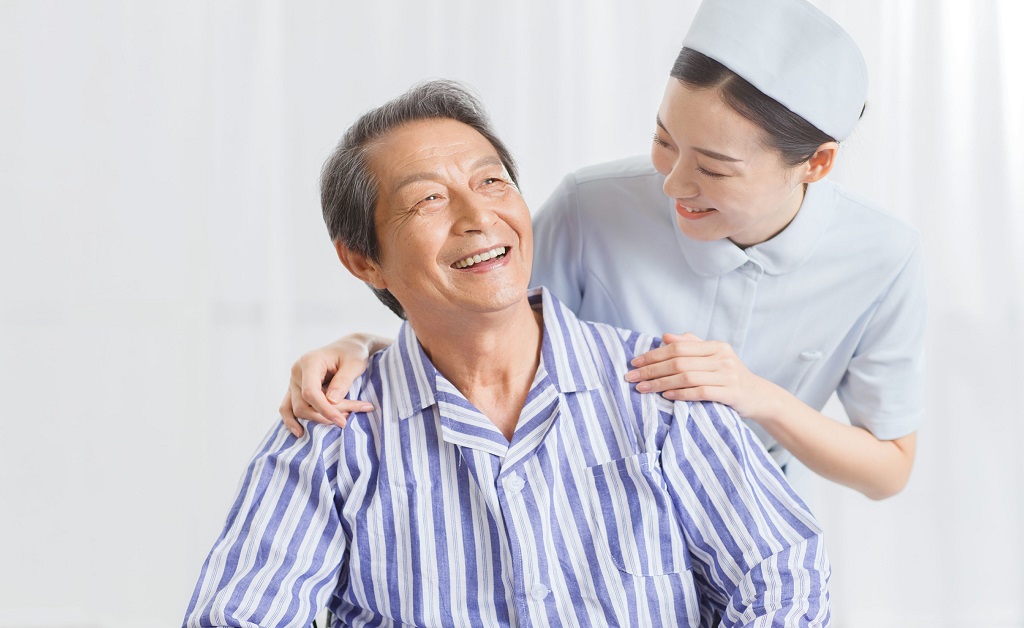 Over the past three decades, China’s population has aged faster than that of most other countries. Life expectancy at birth increased to 76.8 years in 2019, just two years less than life expectancy in the U.S. (Figure 1). The proportion of the population aged 60 years and above was 18 percent in 2018 and is projected to increase to 34 percent by 2045 (National Bureau of Statistics of China, 2018). Chinese older adults now live longer and have experienced substantial economic development, but are they also happier?

A substantial income, good physical and mental health, and health insurance coverage are important factors for older adults pursuing a happy life (Ng et al., 2017; Gwozdz and Sousa-Poza, 2010; Qi and Zhou, 2010; Wu and Tsay, 2018). However, older adults in China have experienced health and financial risks in recent years. In 2015, 100 million older adults in China reported having at least one chronic disease. Moreover, a large proportion of older adults had no access to health care (World Health Organization, 2015). Addressing “difficult and expensive to access health care” (kanbingnan kanbinggui) has thus become an important public policy issue since the 2000s.

Since 2009, the central government has conducted a series of reforms that aim to provide universal and affordable health care for all residents. One important policy is to develop universal health insurance for the general population, especially vulnerable groups such as older adults. The Chinese government introduced the New Rural Cooperative Medical Scheme (NCMS) in 2003 for rural residents, and introduced the Urban Resident Basic Medical Insurance (URBMI) scheme in 2007 for urban residents without formal employment, such as the elderly, students, and the self-employed.The two new schemes, combined with two existing schemes (the Government Medical Insurance, or GMI, for employees of government institutes, and the Urban Employee Medical Insurance, or UEMI, for urban employees) established universal health insurance in China (see Note 1). Older adults benefited from this universal coverage. In 2012, more than 98 percent of older adults were covered by a public health insurance program (World Health Organization, 2015).

However, there is mixed evidence on the effects of health insurance on health and subjective wellbeing in the general population, including for older adults. Several studies find that enrolment in both the NCMS and URBMI do not reduce the out-of-pocket medical expenses of enrollees, although enrollment promotes their utilization of medical services (Cheng et al., 2015; Liu and Zhao, 2014). The benefits from these programs are generally insufficient, and access to health care is often inequitable, which leads to a disparity in health outcomes across the different health insurance schemes (Su et al., 2018). However, Qi and Zhou (2010) find that Chinese older adults covered by the relatively generous GMI program have a higher self-reported subjective wellbeing compared to their counterparts. There are no longitudinal studies of how the coverage of different health insurance programs impacts the life satisfaction of older adults in China.

Our recent study (Yang and Hanewald, 2020) tests the extent to which having various health insurance coverage programs contributes to life satisfaction among middle-aged and older adults (age 45 and above) in China. Based on data from the nationally representative China Health and Retirement Longitudinal Study (CHARLS) survey in 2011, 2013, and 2015, we document that older adults without any health insurance coverage report the highest rates of life dissatisfaction (23 percent), while GMI enrollees report the lowest rate (3 percent), followed by URBMI enrollees (9 percent). At the same time, GMI enrollees have the highest life satisfaction rate (30 percent) compared to their counterparts (Figure 2)  (see Note 2).

Based on these findings, we offer several suggestions for further reforms to China’s health insurance system. First, it is important to recognize that the current health insurance system is fragmented. Individuals enrolled in different health insurance schemes would face different out-of-pocket expenditures for the same health care with the same quality. The central government should set up guidelines and plans to deepen the reforms of the health insurance system. While universal coverage has been generally achieved, further reforms should focus on narrowing the gaps in the levels of service provision across schemes. For example, the NCMS could be integrated into the URBMI or the UEMI, or the GMI and the UEMI could merge into one new health insurance scheme. This consolidation should aim to reduce the gaps across different schemes and provide adequate inpatient and outpatient services to all enrollees. Some provinces and cities have begun the process of consolidation (for example, Nanchang City merged the URBMI, the URRMI, and the NCMS in 2016), but the pace of consolidation varies across China. Pilot programs at the city or provincial level lack the universal standards for reimbursements and benefit packages. Further consolidation requires national and universal guidelines as well as financial support from the central government.

Second, the central government should subsidize vulnerable groups, such as economically disadvantaged older adults who have difficulty purchasing health services or high levels of demand regarding access to services. Following Japan’s model, China could design a package of services for older adults, which would provide subsidies to older adults and encourage them to use affordable health services. Our research suggests that equitable and affordable insurance is critical to reduce the disparity in health status and therefore improve the life satisfaction of older adults.

Note 1: Funding sources differ across health insurance types. The UEMI is funded by an 8 percent payroll contribution, of which employers pay 6 percent and employees pay 2 percent. The URBMI receives 70 percent of its funding from government subsidies and 30 percent from individual premiums. The NCMS is funded 80 percent by government subsidies and 20 percent by individual premiums. The GMI is 100 percent funded by the government (World Bank, 2010).

Note 2: We note that some regions or provinces in China have started to merge the NCMS and the URBMI into one scheme (the f Urban and Rural Resident Medical Insurance, or URRMI) since 2014. We found that only 2 percent respodents reported to be covered by the URRMI in our sample.

Qi, S., & Zhou, S. (2010). The influence of income, health, and Medicare insurance on the happiness of the elderly in China. Journal of Public Management, 1 (in Chinese).