How Do Family Planning Policies Reshape the Life of the Chinese Elderly?

In our recent work (Chen and Fang, 2018), we evaluate the long-term consequences of China’s family planning policies on the quality of life of the Chinese elderly. We identify the causal impact by exploiting the provincial heterogeneity in implementing the “Later, Longer, Fewer” policies in the early 1970s. We estimate the causal effect on a set of outcomes, including support from children, consumption, and physical and mental health. We find that family planning has either no effect or a slightly positive effect on elderly parents’ physical health status; however, parents who are more exposed to family planning policies report significantly worse mental health.

In the early 1970s, the Chinese government initiated the famous “Later, Fewer, Longer” campaign. This campaign initiated the rapid decline of China’s total fertility rate from 5.7 in 1969 to 2.7 in 1978 (see Figure 1). Forty years later, the first group of the affected cohorts are now entering their sixties. Unlike their predecessors, they will have fewer offspring who can take care of them in their senior years. Therefore, investigating the long-term effects of family planning on the elderly helps us understand the quality of life for this growing population. In January 2016, China replaced its one-child policy with a universal two-child policy, but many couples have passed their optimal ages for childbirth. Therefore, the impact of family planning policies is likely to be long-lasting. 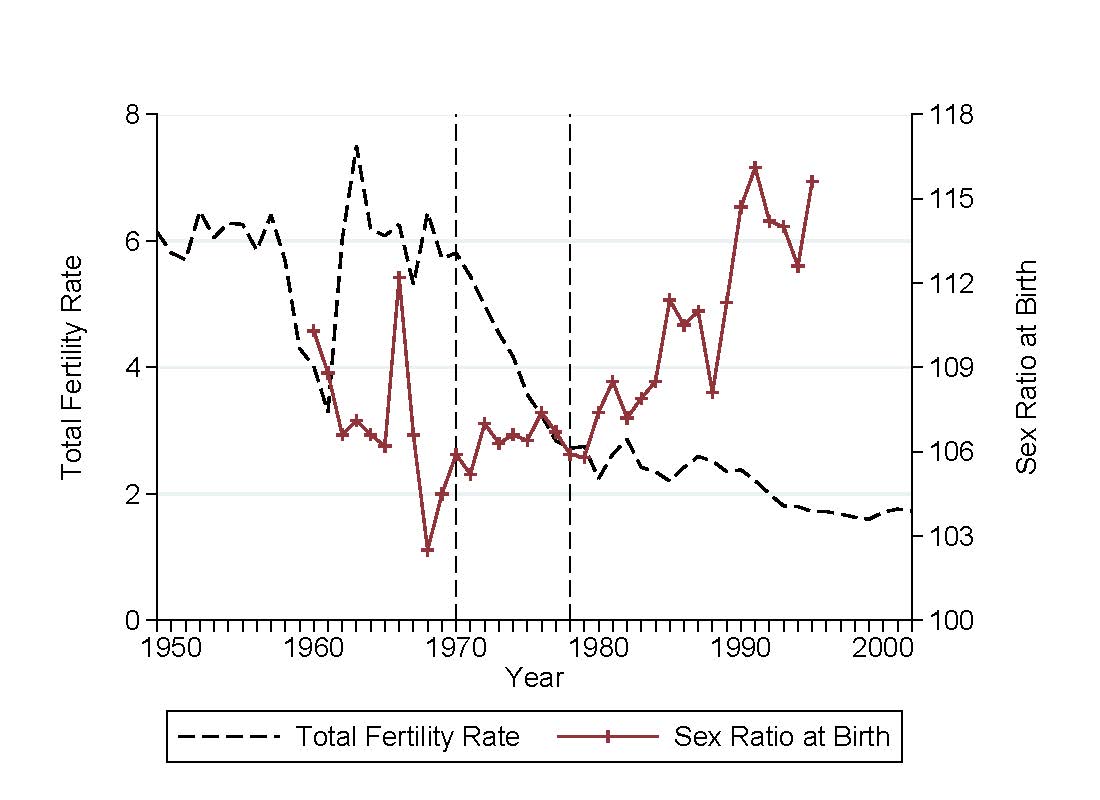 In this article, we examine the long-term consequences of China’s family planning policy on the well-being of the elderly who are aged 60 or above, using data from the China Health and Retirement Longitudinal Study (CHARLS). Our identification relies on the provincial variation in the year of onset of the Family Planning Leading Group, who was in charge of implementing the “Later, Longer, Fewer” policies (LLF henceforth). Previous studies largely refer to the 1979 one-child policy as an exogenous shock to the fertility rate. However, recent studies point out that the one-child policy has a fairly limited impact on lifetime fertility (McElroy and Yang, 2000; Whyte, Wang, and Cai, 2015; Wang, 2016; Chen and Huang, 2018; and García, 2018). Instead, a majority of the fertility decline in China took place during the 1970s prior to the enforcement of the one-child policy (Figure 1). Additionally, the one-child policy resulted in a biased sex ratio (Ebenstein, 2010; Bulte, Heerink, and Zhang, 2011; Li, Yi, and Zhang, 2011; and Loh and Remick, 2015). Figure 1 suggests that after 1979, the sex ratio at birth deteriorated rapidly and steadily exceeded 115 males per 100 females after 1990. The biased sex ratio directly affects parents’ well-being through their children’s marriages (Wei and Zhang, 2011). Chen and Huang (2018) show that China’s LLF policies during the 1970s explain about half of the decline in the fertility rate; yet during that same period, there was not a simultaneous increase in the sex ratio.

It is theoretically unclear how family planning affects the quality of life in old age. There is no doubt that children play critical roles in providing old-age support, especially in developing countries (including China). However, the reduction in the number of children does not necessarily lead to a worsening of the quality of life for seniors for two reasons. First, having fewer children spares resources that were redirected to parents. The reallocation of resources leads to an improved nutritional intake (Wu and Li, 2012) as well as a higher body mass index (Canning and Schultz, 2012). Secondly, parents potentially turned to other measures of old-age support to substitute for having fewer children. For example, it has been well documented that Chinese households increased their savings in response to the family planning policies.

We identify the causal effect of LLF policies from two types of provincial variations: 1) Different years for the establishment of the Family Planning Leading Group (Figure 2); and 2) Different profiles of the age-specific fertility rate in 1969 prior to the enforcement of any effective family planning policy. Figure 3 illustrates how exposure to the policy is computed by looking at Shandong and Beijing. Women born in 1945 are more exposed to the policies in Shandong than in Beijing because Shandong: 1) Formed the Family Planning Leading Group in 1970, three years earlier than Beijing; and 2) Shandong has a higher initial fertility rate. 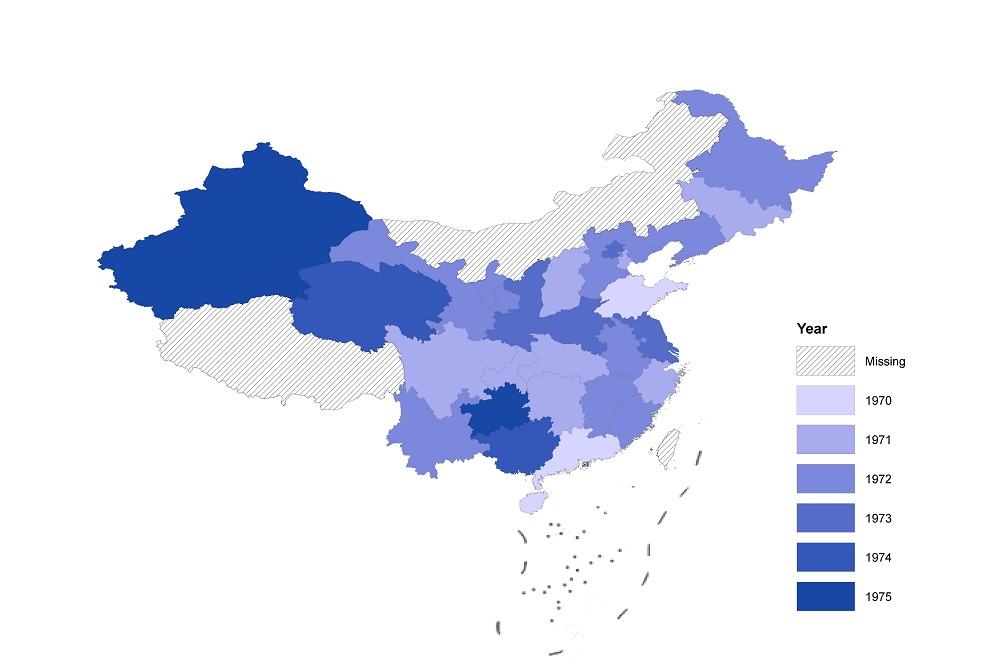 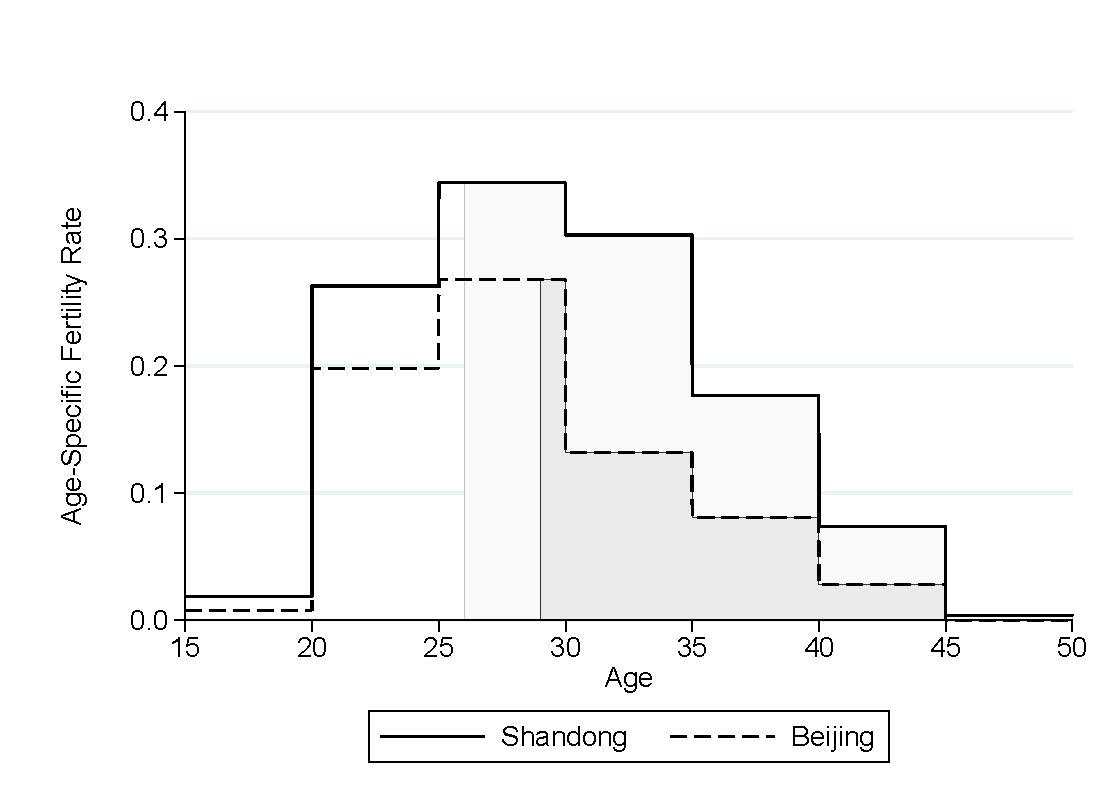 Family Planning and Support from Children

In China, children’s support for their parents mainly takes the form of co-residence, financial or in-kind support, and time transfer (or informal care). Regarding living arrangements, we find no evidence that family planning affects households' decisions towards co-residency. However, the family planning policies reduce the probabilities of having at least one child living nearby— the policies reduce the probabilities of seniors having children in their village/community by 8.8 percentage points and of having children in their county/district by 7.6 percentage points. The LLF policies also reduce elderly parents’ net annual transfers from children by 395.9 RMB (about 18.6 percent of the sample average) and reduce children’s monthly contacts and visits to parents by 3.08 and 3.00 times per month, respectively.

Previous literature documents a trade-off between the quantity and the quality of children in Chinese households (Li, Zhang, and Zhu, 2008; Rosenzweig and Zhang, 2009; Li and Zhang, 2017; Qin, Zhuang, and Yang, 2017). Does the quantity–quality trade-off of children alleviate or exaggerate the effect of having fewer children? The answer is different when considering financial support and psychological support. Children of higher “quality” can earn more, and therefore can better financially support their parents. However, they are even less attached to their parents, which is reflected by less frequent visits and contacts with their parents. This is due to the fact that better educated children tend to live further away and therefore the opportunity costs of visiting their parents are higher.

Despite the reduced financial support from children, we find no policy effect on total household expenditures — households can also finance their consumption from their increased savings. Instead, family planning affects the structure of expenditures — households who are more exposed to the LLF policies spend more on food and living expenses and spend less on health-related expenses.

One central finding of our work is that family planning has drastically different effects on elderly parents’ physical and mental well-being. Using a wide range of health measures, either subjective or objective, we find that family planning has either no effect or a slightly positive effect on elderly parents’ physical health status. In contrast, the prospect of the elderly parents’ mental well-being is not so optimistic. We find that parents who are more exposed to the policies report more severe depression symptoms. The effect is even larger for women and rural parents. Three depression symptoms that are most responsive to the policies are: “feel everything they are doing is an effort”; “feel lonely”; “feel unhappy”. We conject that less children’s company is an important driving force.

Why does family planning have such vastly different effects on physical health and mental health? Two channels partially offset the negative consequences of having fewer children on physical health. First, children from smaller families become better educated and earn more as a result of the quantity–quality trade-off. Children can transfer more money to their parents because of their higher “quality.” A second channel is the ability of parents to accumulate wealth if they have fewer children during their working ages. However, those two channels do not necessarily apply when considering mental well-being. The elderly who are more affected by the family planning policies not only have fewer children to care for them but also receive fewer contacts and visits per child. What makes things worse is that children with better education and higher income are even less attached to their parents. Moreover, whereas parents can save their earned income when they are young to prepare for their old age, they can never “save up” their children’s company.

Our study calls for greater attention to the mental health of the elderly. We would like to emphasize that the mental health status of the elderly is of first-order policy importance. China’s national elderly suicide rates are four to five times higher than the Chinese general population and more than twice the global average (Li, Xiao, and Xiao, 2009). The share of suicides committed by the elderly aged 65 or above monotonically increased from 16.9 percent in 1987 to 41.2 percent in 2014 (Zhong, Chiu, and Conwell, 2016).

Note that if there were no family planning policies, households with a lower socioeconomic status (e.g., rural, less-educated) tend to have more children and they also tend to be generally less able to handle external shocks. However, they turn out to be the most-constrained group when family planning policies impose some birth restrictions. Therefore, family planning may bring unintended consequences on welfare inequality.

Li, Hongbin, Junjian Yi, and Junsen Zhang. 2011. “Estimating the Effect of the One-child Policy on the Sex Ratio Imbalance in China: Identification Based on the Difference-in-differences.” Demography 48(4): 1535-1557.