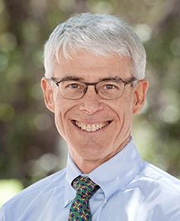 Darrell Duffie is the Dean Witter Distinguished Professor of Finance at Stanford University's Graduate School of Business, and Professor (by courtesy) in the Department of Economics, Stanford University. Duffie is a Fellow of the Econometric Society, a Research Fellow of the National Bureau of Economic Research, a Fellow of the American Academy of Arts and Sciences, and a member of the board of directors of Moody’s Corporation. He was the 2009 president of the American Finance Association, and in 2014 chaired the Financial Stability Board’s Market Participants Group on Reference Rate Reform. Duffie’s recent focuses on capital markets and financial stability. His research is published in journals such as Econometrica, Journal of Political Economy, and Journal of Finance, among others. His recent books include How Big Banks Fail (Princeton University Press, 2010), Measuring Corporate Default Risk (Oxford University Press, 2011), and Dark Markets (Princeton University Press, 2012).