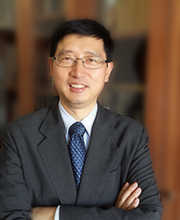 Danyang Xie, Professor of Economics, Hong Kong University of Science and Technology. He served as Dean of the Economics and Management School of Wuhan University, P.R.China (Jan 2014 - June 2017). Danyang Xie received his Ph.D. in Economics from the University of Chicago in 1992. His previous affiliations include University of Montreal (Assistant Professor, 1991-1994), the International Monetary Fund (Economist and Senior Economist, 2000-2004), and Tsinghua University (Special Appointment Professor, 2002-2005). At HKUST, he served as Department Head between April 2007 and June 2010. He had been a member of the Currency Board Sub-Committee of the Exchange Fund Advisory Committee between 2011 and 2016. He has been an Independent Director of Bank of Communications-Schroders Fund Management Co. Ltd since 2011. His research interest includes endogenous growth, fiscal policy, and money and banking.