Rural households in China have experienced a steadily increasing rise in their real income over the last twenty years as economic reforms have revitalized this sector. Analyzing an unusual natural experiment generated by an increase in prices paid for mandatory grain procurement in China post-1993, I seek to provide evidence around how an increase in permanent income affects households’ production portfolio. Evidence suggests that households experiencing positive income shocks substitute away from agricultural production and are more likely to migrate and to invest in non-agricultural production. They also increase their observed levels of borrowing and non-staple consumption.

Development economists have long analyzed the effects of negative income shocks — or more prosaically, bad luck — for poor households living in the rural developing world.  Considerable evidence suggests that households that experience bad harvests, adverse weather, or unexpected illnesses or deaths not only experience a decrease in consumption, but are also forced to sell assets or otherwise alter their productive activities in costly ways (Carter et al. 2007; Carter and Lybbert 2002; Janzen and Carter 2013; Hoddinott 2006).

In China, rural households in the post-1983 period were required to sell a fixed quota of grain to the state at a below-market price as part of the Household Responsibility System, part of a set of reforms that returned land to household management in the post-Mao period. However, the central government began to raise this price gradually in the mid-1990s, generating a large positive shock for rural households (Huang and Rozelle 2002). These households not only experienced a short-term increase in income, they could expect this increase to persist — a permanent form of good luck (Huang 1998).  In a recent paper, I examine how this positive shock affected rural households’ investment patterns between 1993 and 2002 using panel data from the Research Center for the Rural Economy (Leight 2018).  The empirical findings suggest that households who benefited from this positive shock transition out of agriculture and into non-agricultural production. They were also more likely to migrate and show increased consumption and borrowing.  This pattern suggests that particularly poor households may have been constrained from substituting away from agricultural production ex ante.

China’s Grain Quotas and an Increase in Household Income

Mandatory grain procurement by the state, widely-known as the grain quota system, was a key feature of Chinese agricultural policy in the roughly twenty years after agricultural decollectivization.  Rural households sold part of their grain to the state, directing the remainder onto the open market. While the volume of grain quotas declined post-1995, evidence suggests that state procurement continued to account for 25–30 percent of rural households’ grain output, although in this sample, quota sales constitute only around 10 percent of grain production on average (Wang et al. 2003; Sicular 1995).

More importantly, there was a substantial increase in quota prices beginning in 1993. As households sold their grain quota at a higher price — and increasingly, a price that converged to the market price — they experienced a lump sum increase in income. Figure 1 shows the quota and market prices over time. We can observe a large divergence between the two prices around 1993, followed by gradual convergence. 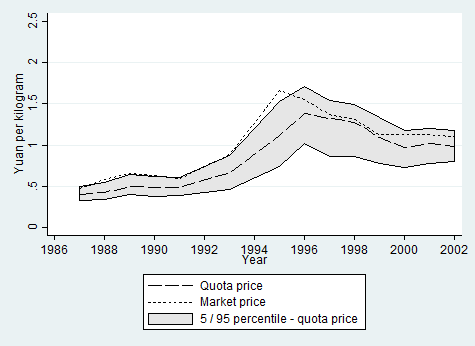 Crucially, however, the size of the income shock generated by the quota price increase varied systematically as a function of the crop cultivated, given the stark difference in the treatment of different crops (Huang et al. 2002). Predominantly rice-growing areas systematically experienced larger income shocks, given that they were subject to larger mandatory quota quantities than predominantly wheat-growing areas. However, directly comparing rice-growing and wheat-growing areas may not be a viable strategy to establish the causal effects of increased quota income, given that these areas could differ along other dimensions.

Accordingly, I employ an empirical strategy that exploits differences across counties within the same province that have a greater propensity to cultivate rice based on their climatic conditions, conditional on village and province-year fixed effects.  The identification assumption for this specification requires that fluctuations in the quota price have no disparate effects on different climatic areas other than via their differential effect on quota income. Given that it is plausible to assume that areas with somewhat different propensity to cultivate rice within the same province do not otherwise have significantly different characteristics, we can use this comparison to identify the effect of the income shock of interest. The analysis examines household investment in agricultural and non-agricultural household business, engagement in outside labor as well as migration, consumption of staple and non-staple goods, and borrowing.

Rising Household Income and Shifts Out of Agricultural Production

Table 1 summarizes the primary results, using an instrumental variable specification in which the interaction of propensity to cultivate rice and the quota price is employed as an instrument for lagged quota income.  We can observe that households that gain more income on the margin following the quota price increase — due to their high probability of cultivating rice — in fact reduce their investment in agriculture (Panel A, Columns 1 and 2). By contrast, they increase their investment in inputs for a non-agricultural household business (Column 3) and are more likely to migrate (Column 6).

In addition, shifts in consumption and credit behavior are observed. Households are more likely to access credit and borrow more (Panel B, Columns 1 and 2). They also consume more, although this effect is not observed for staple foods such as grains (Panel C, Columns 3 and 4). 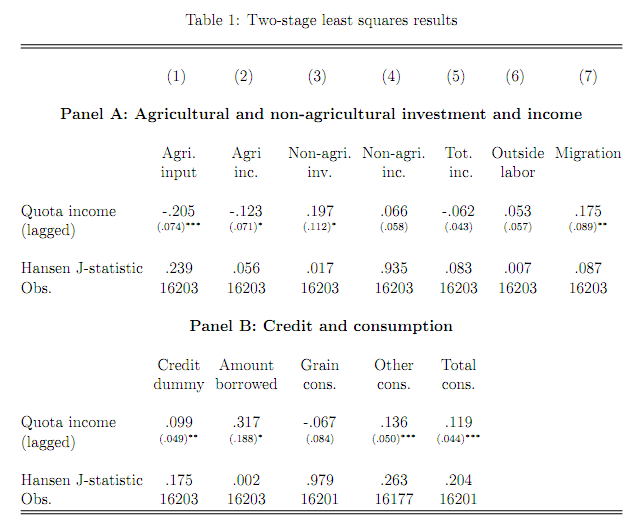 Taken together, these results suggest that rural households in China that experience income shocks show a clear pattern of behavior. They disinvest in agriculture — i.e., the income effect for agriculture is negative — and increase investment in non-agricultural household businesses. They also consume more non-staple goods and access new sources of credit. This evidence is broadly consistent with the hypothesis that at baseline, households are credit-constrained and are unable to access funds to enter non-agricultural production.  The positive income shock relaxes this constraint, allowing households to enter new sectors in which the return to their investments of both labor and capital may be higher.

To further explore the channels for the observed empirical pattern, I analyze whether these effects are larger for some households — in particular, households that were plausibly constrained by low income ex ante and thus unable to enter non-agricultural production.

The evidence suggests that consistent with the hypothesized channel, it is primarily poor and purely agricultural households that respond to the quota income shock. They respond by entering new productive sectors and migrating to seek new employment opportunities. This is suggestive evidence that their low level of income may have prevented poor households from pursuing these opportunities prior to the quota price increase.

This paper analyzes the evolution of an unusual institution in rural China — the grain quota system — in order to estimate the impact of a gradual positive income shock on household economic behavior. The results indicate that the effect of a positive income shock on investment in agriculture is negative, while there are positive effects on investment in non-agricultural household businesses, migration, borrowing, and consumption of non-staple goods.  This evidence is consistent with the hypothesis that households may be credit-constrained ex ante and face required initial investments in non-agricultural production that are large. Accordingly, an increase in agricultural income allows households to invest in non-agricultural activities for the first time. The implications of this shift for the long-run welfare of Chinese rural households remains an interesting topic for future exploration.

Huang, J., and S. Rozelle. 2002. “The Nature of Distortions to Agricultural Incentives in China and Implications of WTO Accession.” Working Paper No. 02-006, University of California, Davis, Department of Agricultural and Resource Economics, Davis, CA.

Janzen, S. A., and M. R. Carter. 2013. “After the Drought: The Impact of Microinsurance on Consumption Smoothing and Asset Protection.” NBER Working Paper No. 19702, National Bureau of Economic Research, Cambridge, MA. http://www.nber.org/papers/w19702