China has experienced remarkable economic growth since its market-oriented reform in the late 1970s. Its rising income inequality, as evident in the rocketing Gini coefficient between 1981 and 2016 in Figure 1, is equally impressive but less understood. We investigate two questions in our working paper (Fan et al., 2018): To what extent does inequality persist across generations in China? What are the institutional and policy factors driving the changes in intergenerational income persistence? Understanding the changing intergenerational income persistence in China over the last 40 years of economic reform may provide interesting insights for the economics literature and yield policy implications for other countries at a similar stage of economic transition and development. 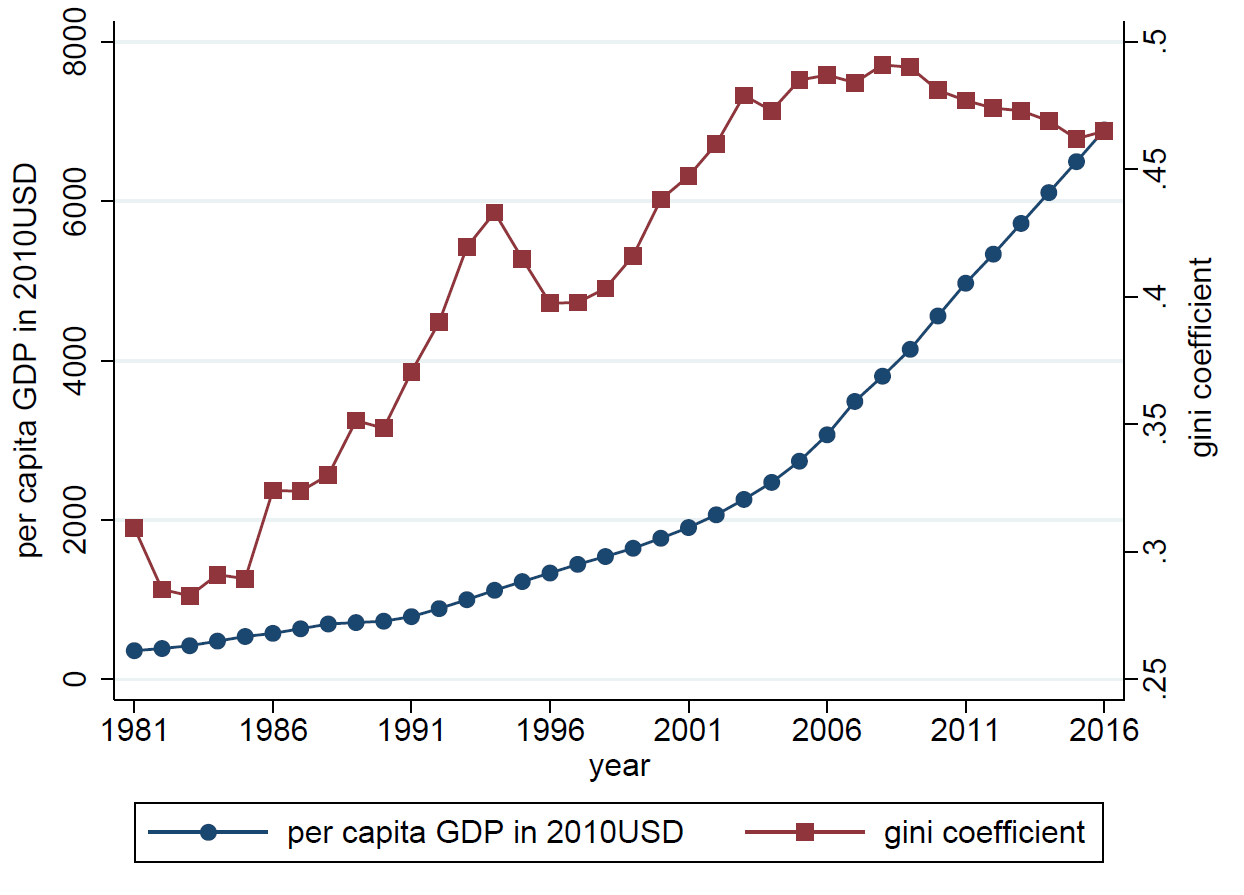 During China’s transitional period, intergenerational income persistence and influencing factors are undergoing rapid change, in contrast to the gradual patterns seen in the U.S. (Lee and Solon, 2009; Chetty et al., 2014). On the one hand, the institutional reforms have sharply reduced poverty and changed China from a planned and agricultural economy to a market and industrial economy. The relaxation of the Household Registration (hukou) System has induced domestic temporary migration in a historically unprecedented scale. The declining poverty rate and agricultural sector share, as well as the rising rural-to-urban migration rate, likely reduce intergenerational income persistence. On the other hand, a rising return to schooling in urban China, as well as a sharp increase in educational costs, have emerged during this transitional period in China (Zhang and Zhao, 2007). The drastic expansion of higher education, which is intended by policy makers to provide more educational opportunities for the children of the poor and improve mobility across generations, appears to disproportionately benefit the children of the rich (Li et al., 2013). These forces likely enhance intergenerational income persistence. Thus, the changing pattern of intergenerational income persistence during China’s transitional period remains an empirical question.

We further study the fraction of children who earn equal to or beyond 150 percent of their parents’ income, conditional on parents’ income in each quintile in their generation. On the one hand, for children from bottom-quintile families, 66.1 percent of them from the early cohort later earn 1.5 times their parents’ income or more. In the later cohort, the fraction decreases to 59.1 percent. On the other hand, for children from the top-quintile families, there is a similar drop from 6.7 percent to 3.1 percent between the early and later cohorts, respectively. The rate also falls across cohorts for other quintiles. This result again confirms that intergenerational income persistence has risen significantly during China’s transitional period. 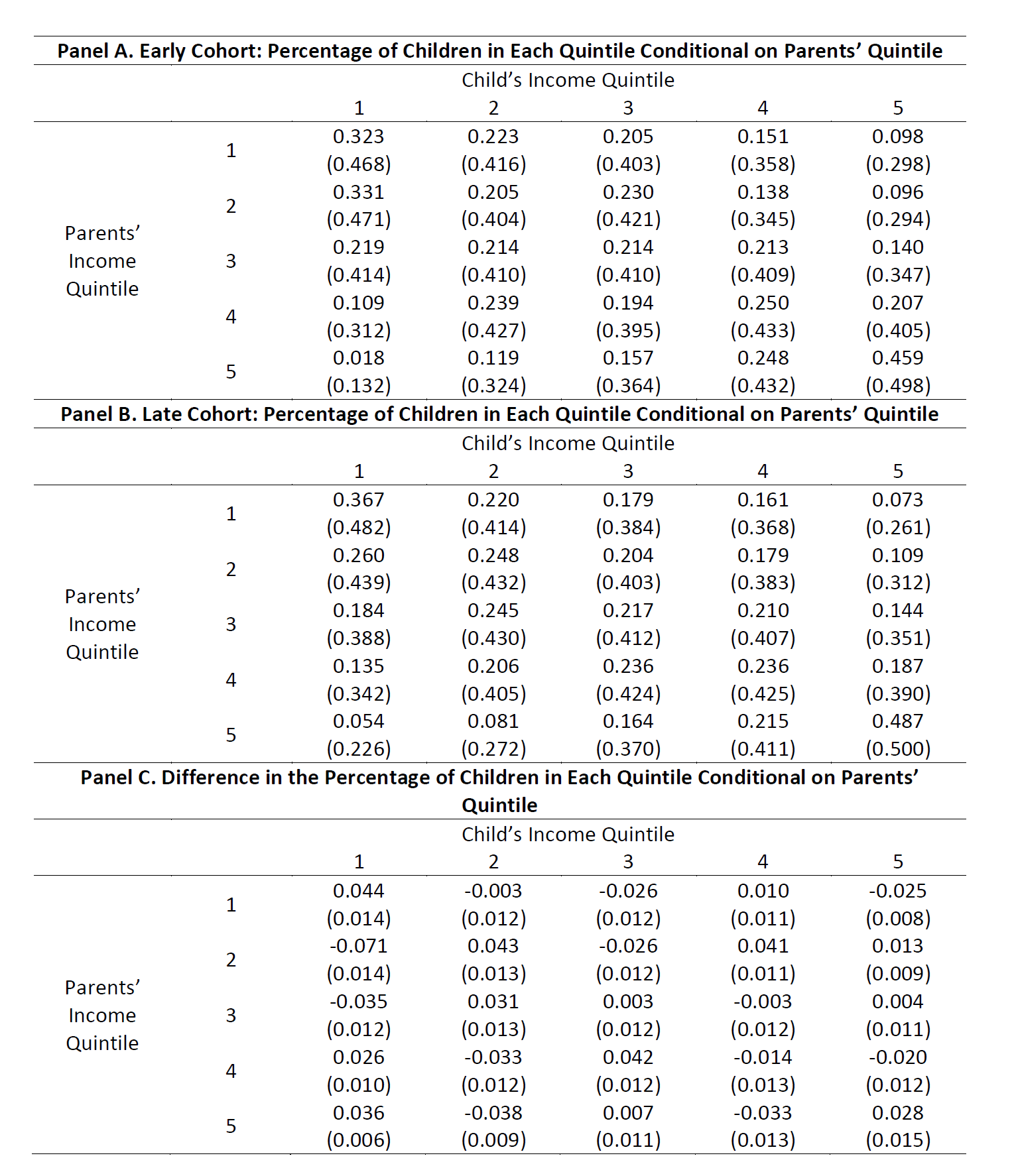 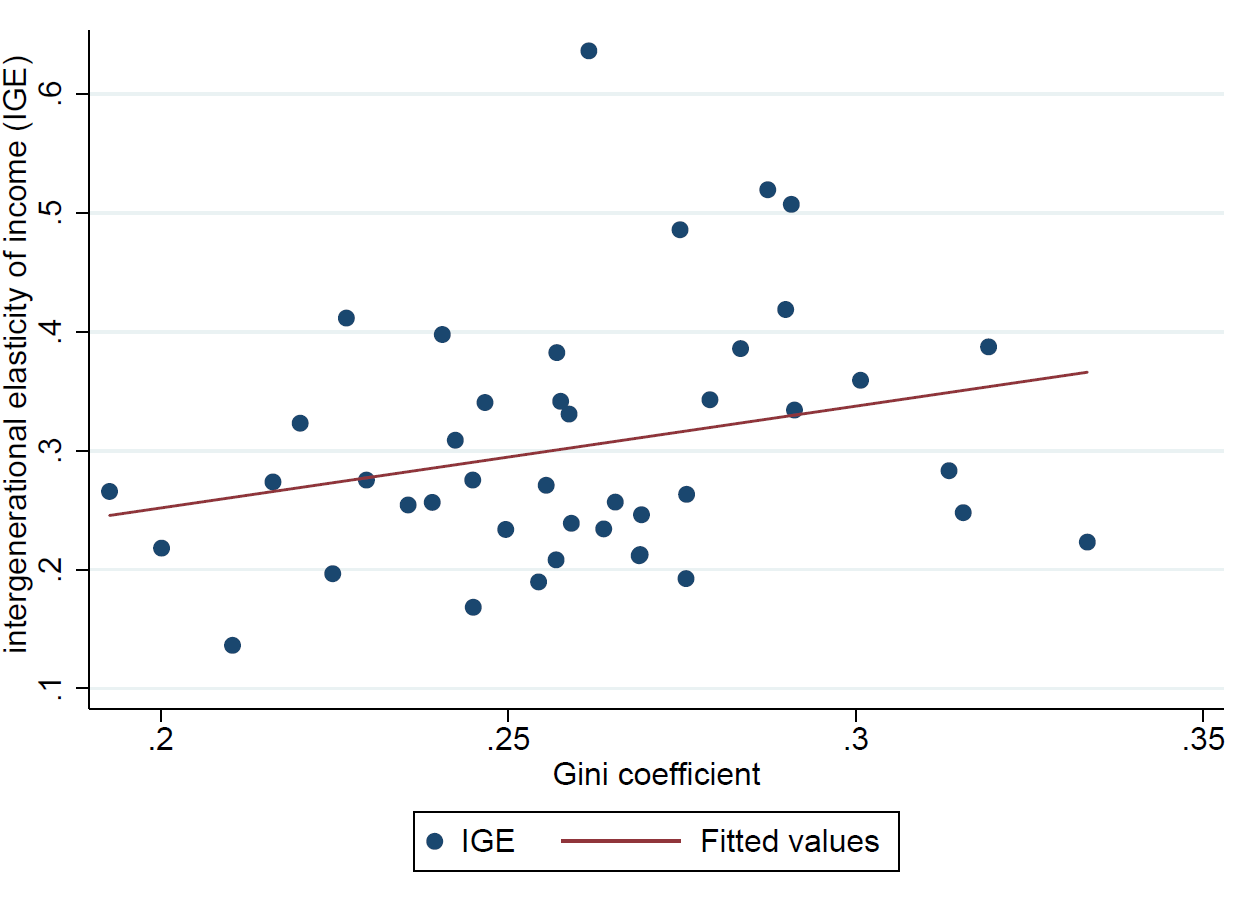 Note: The Gini coefficient is calculated by province, cohort, and urban and rural areas.

Krueger, Alan. 2012. “The Rise and Consequences of Inequality in the United States.” Presentation made to the Center for American Progress, January 12, 2012.
https://cdn.americanprogress.org/wp-content/uploads/events/2012/01/pdf/krueger.pdf