A key foundation of Chinese-style institutions is that different levels of government control resources and utilize their power to support businesses connected to them. Professors Haoyuan Ding of Shanghai University of Finance and Economics, Haichao Fan of Fudan University, and Shu Lin of the Chinese University of Hong Kong develop a theoretical model and present supporting empirical evidence to show how this institutional feature affects firm exports in China. In particular, they find that political connection has a positive effect on export in industries that heavily rely on external finance and contracting environment, but a negative effect on export in other industries.

Recent studies in the trade literature identify domestic institutions as an important determinant of a country’s comparative advantage (e.g., Berkowitz et al., 2006; Ju and Wei, 2010; Levchenko, 2007; Manova, 2013; Nunn, 2007; and Nunn and Trefler, 2013). Ju and Wei (2011) further argue that this point is particularly true for economies with low-quality institutions, where institutional factors can be more important than factor endowment in determining their comparative advantage.

At first glance, it seems difficult to reconcile this argument with the experience of China, the largest export economy in the world. The quality of China’s judicial and financial institutions is rather poor according to standard measures. For example, Kaufmann et al.’s (2003) rule of law index, a commonly-used measure of judicial quality, ranks China as 120th in the world in 2014. China’s financial institutions are also known to be underdeveloped. For instance, China has below average scores and ranks lower than other emerging countries, such as Pakistan and South Africa, in both legal creditor rights and shareholder rights (e.g., La Porta et al., 1998, 1999).

This paper (Ding, Fan, and Lin, 2017) aims to contribute to the literature by exploring the trade effects of a new form of informal institution that is of particular importance to China. A key foundation of Chinese-style institutions is that different levels of government control the allocations of resources and utilize their political and economic power to support businesses connected to them, with a particular biased concentration on exports (e.g., Bai et al., 2014). Although this Chinese-style institutional feature is not captured by standard measures for institutions, it plays a crucial role in determining resource allocations in China. As a result, we argue that connections with the government can have important consequences on firm exports.

How Do Political Connections Affect Firm Exports? A Simple Model

To examine how political connections affect firm exports, we first present a simple model with heterogeneous firms to illustrate the underlying mechanisms and to provide testable hypotheses for our empirical analysis. In our model, a fraction of firms’ material inputs is relationship-specific. This fraction varies across sectors for technological reasons and sectors with a higher fraction of relationship-specific inputs rely more on contract enforcement (e.g., Levchenko, 2007). Also, to produce and to enter foreign markets, firms need to finance a certain fraction of their total costs, which reflects their dependence on external finance and also varies across sectors for technological reasons. Based on existing empirical evidence documented in the literature concerning political connections (e.g., Charumilind et al., 2006; Claessens et al., 2008; Faccio, 2006; Fraser et al., 2006; Johnson et al., 2002; Khwaja and Mian, 2005; Li et al., 2008; and Sapienza, 2004), we assume that politically-connected firms have two key advantages over non-connected firms; namely, a better contractual legal environment and better access to external finance. As a result, connected firms gain a comparative advantage in contract-intensive and financially-dependent sectors.

Connected firms, however, are also at a disadvantage. Existing studies have shown that connected firms typically have a lower managerial efficiency (e.g., Chaney et al., 2011; Claessens et al., 2008; Fan et al., 2007; and Leuz and Oberholzer-Gee, 2006) — a fact that, according to the recent contribution of Bloom et al. (2016), can potentially have a negative impact on their exports. To capture this phenomenon, we assume in our model that firms’ marginal cost of production increases with the degree of political connectedness. This negative effect associated with managerial inefficiency is general and does not vary across sectors. The overall effect of political connections on firms’ exporting performance — including export revenue, export quantity, and the number of varieties — is thus ambiguous and depends on the degree of reliance on external finance or contract enforcement.

What Do We Find Empirically?

We then put the predictions of our simple model into a test using merged Chinese listed manufacturing firm data and Chinese custom data for the years 2004 to 2013. We construct a firm-level measure of political connectedness for Chinese listed manufacturing firms focusing on all members of the top management team (TMT), including the CEO, CFO, and other top managers, as well as the firms’ board members. By manually tracking their curricula vitae, we are able to identify if a TMT or a board member belongs to the Chinese People’s Congress (CPC) or the Chinese People’s Political Consultative Conference (CPPCC) at either the national or provincial level. If a TMT or a board member is currently (or previously was) a member of either organization, he or she is identified as a politically-connected member. Among the 1,205 firms in our sample, 473 firms have at least one connected TMT or board member in at least one year. With the constructed political connectedness measure, we estimate the following benchmark specification:


where logexportsijkt represents firm i ’s log export value to destination country j in sector k in year t. Connectit is a measure of firm i ’s political connectedness. Contractk and financek are measures of dependence on contract enforcement and external finance at the sector level, respectively. Xit is a set of firm-level control variables including total factor productivity (TFP), return on assets (ROA), leverage, log total assets, and log number of employees. Xit also contains a firm’s tax burden and domestic-sales-to-total-sales ratio to account for the impacts of taxes and the domestic market on firm exports. To further separate the effects of political connections from those of other corporate governance variables, board size, board independence, and board leadership (a CEO-chairman duality) are included in Xit as well. Firm fixed effects, φi, and destination-sector-year fixed effects, φjkt, are also added to control for unobserved firm heterogeneity and country-sector level demand shifts.

Table 2 summarizes our basic findings. Panel A shows the estimation results of Equation (1). The benchmark regression results are in favor of our hypotheses. The estimated coefficient on political connections per se is negative and significant at the 1 percent level, but the estimated coefficient on the two interaction terms are positive and significant at the 1 percent level, meaning that political connections have a general negative effect on firm exports and that the beneficial effects are stronger in sectors that rely more on contract enforcement or external finance. In Panel B, we conduct similar exercises to examine the effects of political connections on aggregate exports (across destinations) by sector. Our results are similar.


Table 2. Regression of Firm Exports on Political Connection and Its Interactions with Contract Enforcement and External Finance Dependence 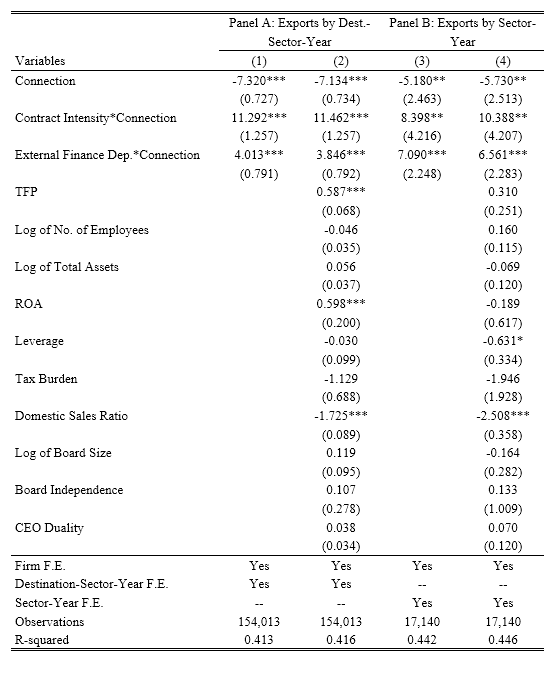 Quantitatively, the coefficients on political connections and the interaction terms imply that the effects of political connections on exports substantially vary across sectors. It can either be positive or negative depending on the degrees of contract intensity and external finance dependence. Take the professional and scientific equipment sector and the petroleum refineries sector as examples. The former ranks second in both contract intensity (0.78) and external finance dependence (0.96) among all sectors, whereas the latter has the lowest ranking in contract intensity (0.06) and the fifth lowest score in external finance dependence (0.04). Our benchmark results in Column (2) of Table 2 suggest that a one standard deviation increase in the degree of political connectedness leads to a 25.98 percent increase in export revenue in the former sector, but a 23.22 percent reduction in export revenue in the latter sector.

Our results hold in a variety of robustness checks. Moreover, we also find that the beneficial effects of political connections on firm exports through the contract enforcement and external finance channels are significantly stronger for private firms. Besides export revenues, we also find similar effects of political connections on firm export quantity and the number of export varieties.