Shadow banking in China includes an important role for Banks’ Shadow in the credit money creation process, which poses challenges to monetary policy regulation and financial risk management. I urge regulators to closely track the evolution of various shadow banking channels both on- and off-balance sheet. To strengthen supervision, separate macro-prudential regulation tools, such as asset reserves and risk reserves, are needed for Banks’ Shadow and Traditional Shadow Banking, respectively.

Chinese shadow banking is dominated by commercial banks, due to the bank-dominated financial system in China. A key characteristic of shadow banking in China is that banks hide loans as alternative accounting subjects. Motivated by this important characteristic, this article distinguishes Banks’ Shadow from Traditional Shadow Banking (mainly non-bank financial institutions), from the perspective of the bank’s credit money creation. I investigate specific channels that contribute to both Banks' Shadow and Traditional Shadow Banking, providing accurate measurements and analyzing the evolution of these channels as banks respond to government regulations. As a resulting policy implication, I emphasize that regulators should apply different restrictions on Banks' Shadow and Traditional Shadow Banking, and focus on the balance sheet items that banks might use for hiding their shadow banking operations.

Caution should be paid to wealth management products (WMPs), which lie on the liabilities side of the balance sheet. WMPs are “quasi-deposits,” which are effectively bank products sold to households. In the case of loans to local government financing platforms, state banks tend to move these loans off balance sheet as entrusted loans, and the corresponding deposits also off balance sheet as WMPs. This means that the money created by Banks’ Shadow should be canceled. The returns of WMPs are generally higher than deposit rates. For example, in June 2017, the average yield of a WMP was 4.66% (annualized), while the official deposit rate was 1.5%. The reasons for higher WMP returns include the fact that 1) WMPs are not subject to reserve requirements, and 2) WMPs are not covered by deposit insurance.

Traditional Shadow Banking involves credit creation activities undertaken by non-bank financial institutions, and it transfers money outside the banking system to provide funding for enterprises. It has similar credit creation mechanisms as in advanced economies. Without acting as a channel for banks, non-bank financial institutions invest funds that they raise to real sectors through trust loans (without bank-trust cooperation), asset management plans, equipment leasing, mortgages, credit loans, etc. In this process, credit increases but money supply remains unchanged, and it is only a transformation of money between different entities.

Funding from China’s shadow banking mainly flows into three types of borrowers, namely local government funding platforms (LGFP), enterprises with excess capacity, and real estate developers. For the purpose of illustrating the financing process, take channels of Banks’ Shadow as examples. State banks could lend to nonbanking financial institutions (同业拆放), which then lend to LGFP, enterprises with over-capacity, and real estate developers as entrusted loans. This is driven by the fact that risk weight for lending to financial institutions is lower than to enterprises. Besides, state banks could also provide loans indirectly to enterprises through small banks, by holding the claim to small banks as interbank payment. This is motivated by a regulation that the credit risk weight of interbank payment is 25%, which is much less than the 100% for loans to enterprises. Moreover, banks purchase financial products issued by non-banking financial institutions including trust companies, security firms, insurance companies, financial companies, and mutual fund (subsidiary companies), which again have lower risk weight than loans. The corresponding balance sheet items mainly include 1) receivable investment (the beneficial rights of trust, commercial paper, and bond) and 2) financial assets available for sale.

The effectiveness of some regulatory policies and tools has been compromised or partially offset by the shadow banking system. For example, the Chinese government set credit limitations—such as on loans from traditional banks and the equity ratio of developers—on the real estate sector in order to prevent housing bubbles, but shadow banking provides alternative funding resources. A similar case holds for enterprises with excess capacity. Furthermore, the capital adequacy requirement for banks became less effective, since shadow banking activities enabled banks to move some assets off-balance sheet, such as entrusted loans and trust loans through bank-trust cooperation, as mentioned above.

Accurate measurements of China’s shadow banking with all of its channels are fundamental for banking supervision and regulation. It is important, therefore, to avoid double counting. As indicated in Figure 1, bank-trust-cooperation related bank assets overlap with trust loans. Double counting happens if one sums up trust loans and WMPs, since trust loans are on the asset side while WMPs are on the liability side.

Following approaches introduced by Sun and Jia (2015), I measure Banks’ Shadow with the deduction method and apply direct counting for estimating Traditional Shadow Banking. Figure 2 and Figure 3 show not only the evolution of Chinese shadow banking (both Banks' Shadow and Traditional Shadow Banking), but also the impacts of regulations on banks’ active responses in switching among various Banks’ Shadow channels.

As illustrated in Figure 2, between June and December 2014, the scale of Banks’ Shadow and its proportion in money creation declined (Panel A), and this is mainly due to the shrinkage in Banks’ Shadow that channeled through other banks, such as interbank payment and reverse repo (Panel B). Ultimately, this is due to stricter regulations on interbank business that were implemented by Chinese financial market regulators. During January 2015 through December 2016, although the volume of reverse repo kept declining, Banks’ Shadow picked up its momentum in growth and the ensuing credit money contributed to an increasing proportion in total credit money creation by banks. These trends indicate that banks switch from the reverse repo channel to alternative channels to hide assets, such as financial assets available for sale and receivable investments (Panel B). (NB: Banks are required to consolidate all bank-trust-cooperation WMPs on balance sheet.) 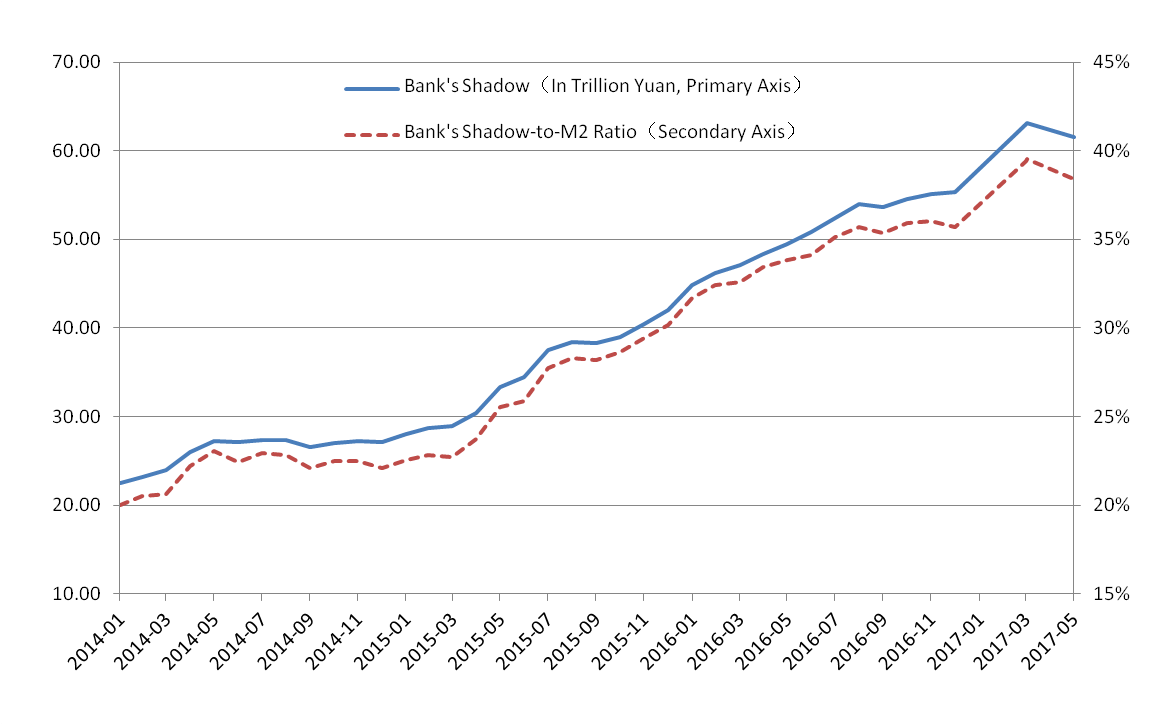 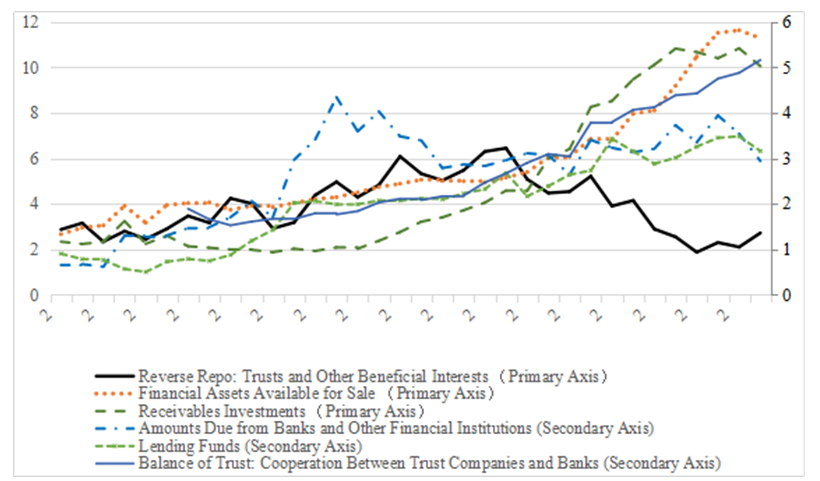 Notes: Balance sheet items of listed banks are downloaded from Wind database, “Balance of Trust: Cooperation between Trust Companies and Banks” is from China Trustee Association.

Panel A: Size of Traditional Shadow Banking in China 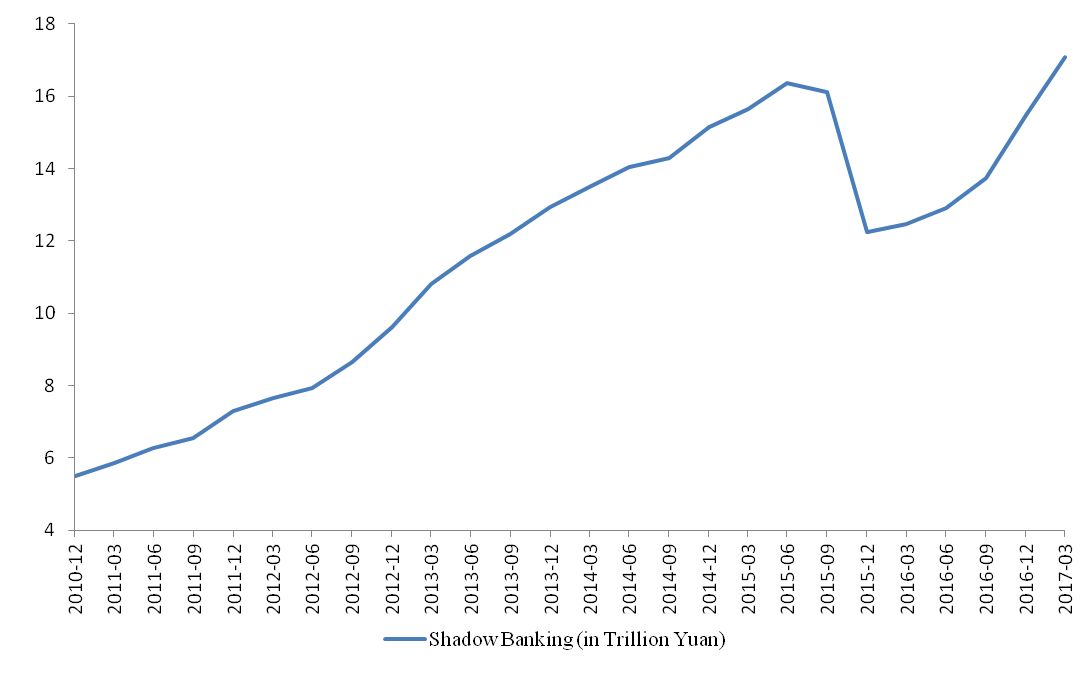 Panel B: Components of Traditional Shadow Banking in China 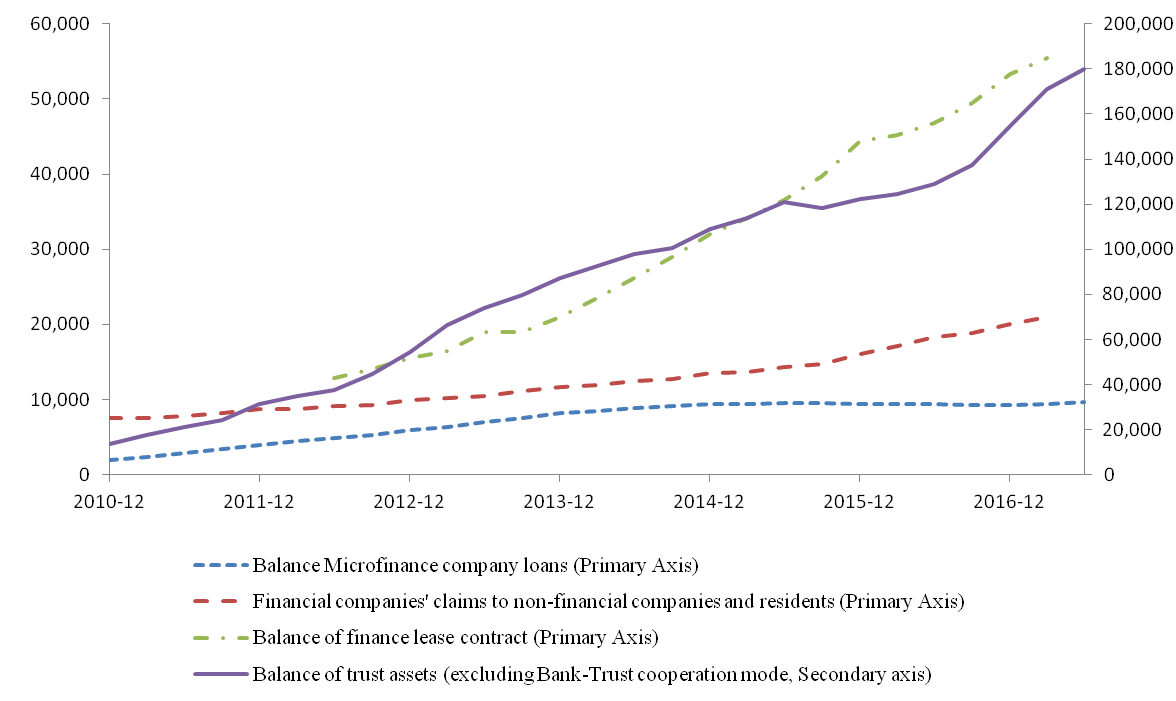 The People’s Bank of China has tightened shadow banking related regulations in recent years, especially since January 2017. First, WMP-related assets have been included in the Macro-prudential Policy Assessment (MPA) framework. Second, banks are forbidden to provide a guarantee on WMPs to holders. And third, the central government prohibited local governments from continuously expanding their debt.

To further strengthen the supervision of shadow banking, separate tools are needed to implement macro-prudential regulations of Banks’ Shadow and Traditional Shadow Banking. Regulators should impose an "Asset Reserve" requirement on banks and a “risk reserve” requirement on non-bank financial institutions. The “Asset Reserve” requirement requests banks to hold deposit at central bank according to the amount of banks’ assets. This requirement pays attention to the asset side of a bank’s balance sheet, compared to the existing reserve requirement which focuses on the liability side of a bank’s balance sheet; is based on risk characteristics of different bank assets; and can control not only asset risk but also money creation from bank assets (not liabilities), thus improving the efficiency of monetary policy transmission. The “Risk Reserve” requirement compels non-bank financial institutions to hold deposits at central bank according to the amount of fundings that they absorb in order to cope with liquidity risk. Because non-bank financial insitutions can only use their fundings to provide credit to enterprises, and can not creat credit through assets expansion, so this requirement can bind the credit creation of Traditional Shadow Banking to the balance sheet of monetary authorities, effectively restraining credit creation of non-bank financial institutions. Equipped with these two kinds of institutional arrangements, a generalized macro-prudential regulation framework could be erected. Combining this framework with other policies, such as micro-prudential regulations, would form a comprehensive law and regulation system for shadow banking supervision.

To summarize, my analysis of China’s shadow banking system highlights the important role of Banks’ Shadow in the credit money creation process, which poses challenges to monetary policy regulation and financial risk management. I urge regulators to closely track the evolution of various shadow banking channels both on- and off-balance sheet. To strengthen supervision, separate macro-prudential regulation tools are needed for Banks’ Shadow and Traditional Shadow Banking, respectively.

(Sun Guofeng is now the Director General of the Research Institute of the People’s Bank of China.)