Trade Liberalization and the Performance of China’s Manufacturing Sector

In 2010, China displaced the US as the world’s largest manufacturing country. Experts typically cite expanded access to international markets and high rates of investment as the chief reasons for the rapid growth in this sector. Often neglected in these accounts, however, is the role of a rapidly expanding domestic market, as well as impressive productivity growth over much of the 1990s and 2000s before the onset of the Great Recession (Brandt, Van Biesebroeck, and Zhang, 2012). In our recent article in the American Economic Review (Brandt et. al., 2017a), we utilize firm-level data covering most of China’s manufacturing sector to examine the effect of trade liberalization on firm-level markups and productivity over a period that spans China’s entry into WTO.

At the time of China’s entry into the WTO in 2001, more than eighty-five percent of all manufactured goods produced in China were destined for the domestic market. Entry into the WTO permanently extended MFN (most-favored nation) status to China’s exports, but also mandated an opening of Chinese markets to imports through a reduction in trade barriers. Indeed, Chinese leaders, such as former Premier Zhu Rongji, saw the exposure of domestic firms to stiff import competition as crucial to the development of a vibrant national economy.

Figure 1 shows the evolution of import tariffs in China through 2007. Early on, average levels of protectionism were high, but they varied widely between sectors. Output tariffs, for example, were substantially higher than input tariffs, reflecting the different treatment of final goods from raw materials, intermediate inputs, and capital imports. Over time, average tariffs fell, while differences between sectors—reflected by the interquartile range—narrowed. By 2007, the median tariff was only 7.5 percent, far below the level of countries with comparable per capita GDP.


Figure 1: Evolution of Import Tariffs on Each Sector's Output and Inputs 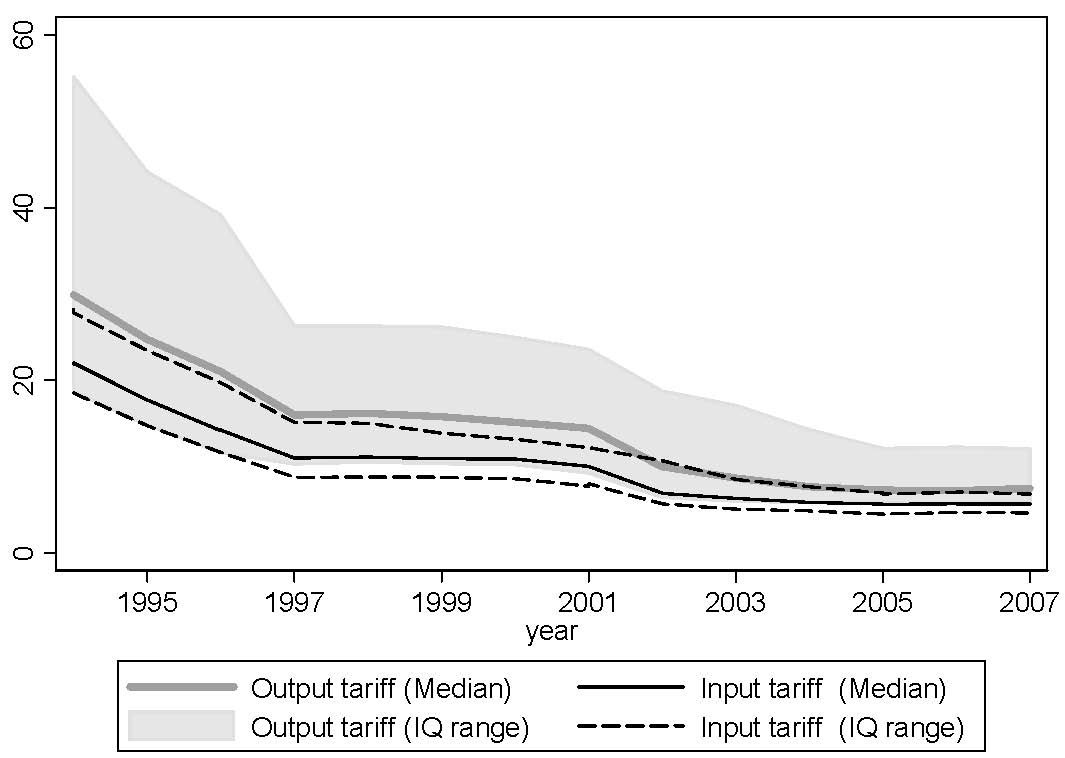 Trade liberalization can enhance welfare through a number of channels. Lowering import tariffs increases competition and induces firms with market power to reduce their markups (i.e. price/marginal cost), which redounds to the benefit of consumers (Levinsohn, 1993). This behavior can also generate improvements in allocative efficiency. On the other hand, marginal costs are likely to fall with a reduction in tariffs on imports of intermediate goods (Tybout and Westbrook, 1995). Marginal costs can also fall due to higher productivity, as firms improve their operations in the face of more intense foreign competition. While all three of these mechanisms reduce output prices and raise welfare, ceteris paribus, the latter two will increase markups unless the pass-through of cost savings is perfect. The relationship between markups and gains from trade is thus not monotonic, but rather depends on the mechanism at work, in contrast with the well-documented positive relationship between productivity and liberalization.

Figures 2 and 3 capture the effects of the “average” cumulative cuts in input and output tariffs on markups and productivity between 1998 and 2007. Over this period, input (output) tariffs fell on average by 5.31 (8.11) percentage points. In each case, the total effect can be decomposed into changes in incumbent firms (Within); through the reallocation of resources to more productive firms (Between); the contribution of better entrants (Entry); and from the exit of poorly performing firms (Exit). 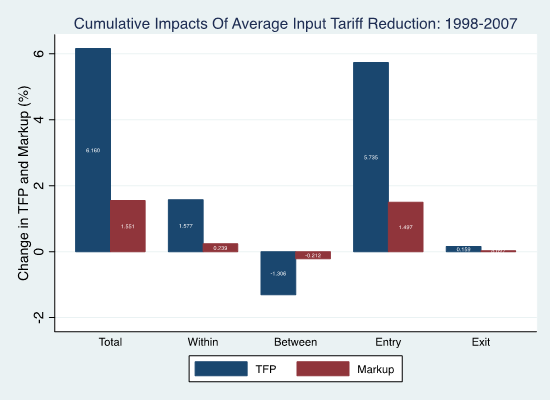 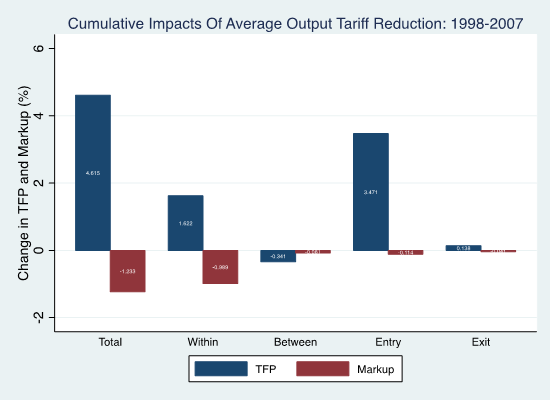 In contrast to existing estimates in the literature for other countries, input and output tariff cuts in China are highly complementary in raising productivity. Productivity increased by about 4.6 percent as a result of the output tariff cuts, with two-thirds of this increase attributable to new firm entry, and the remainder to improvements by incumbents. Earlier work (Brandt, Van Biesebroeck and Zhang, 2012) shows the important contribution of new firms to productivity growth. Downward pressure on domestic prices in sectors in which tariffs fell raised the bar for new entrants. Input tariff cuts had an even larger impact on productivity, primarily through the positive effect on entrants, and to a lesser extent through its impact on incumbents. In total, tariff cuts raised productivity by 10.8 percent, accounting for more than forty percent of the improvements in productivity over this period. On the other hand, markups fell with output tariff cuts, largely through the effect on incumbents, and rose with the cuts in input tariffs, with new firms as the largest beneficiaries. Overall, however, tariff cuts had relatively modest effects on markups, which rose on net only slightly.

Several mechanisms at work are important in explaining these patterns. For output tariff cuts, the pro-competitive effect of trade liberalization on markups dominates offsetting forces that increase markups at the firm level (due to lower marginal costs) and at the industry level (due to a reallocation of output to more productive firms with larger markups). At the same time, the productivity-enhancing effects of output tariff cuts can be linked to reduced agency problems amongst incumbent firms, notably SOEs, and to a more positive selection of new entrants in the most liberalized sectors. Finally, contrary to the experience in other developing countries, access to a greater variety and higher quality inputs was not an important channel for productivity growth: Imported intermediate goods increased only marginally as a share of total intermediate input use. Nonetheless, lower input tariffs that raise markups likely contributed to productivity growth by providing additional resources for firms to implement productivity-enhancing investments.

Several features of the Chinese economy shaped the effects of trade liberalization. First, a more liberal environment for inward foreign direct investment (FDI), which facilitated learning and technology spillovers, preceded domestic market reforms.  The deep presence of foreign-invested firms may have diminished the importance of the mechanism working through imported inputs. Second, tariff reductions were accompanied by domestic reforms to reduce the size of the state-owned sector and relax restrictions on private firm entry. Epifani and Gancia (2011) show theoretically that welfare gains from trade liberalization are more likely to be positive under free entry, while asymmetric tariff reductions might exacerbate misallocation and even reduce aggregate welfare if entry barriers are important. An industrial policy that facilitates firm entry is complementary to trade liberalization, in line with the cross-country evidence in Freund and Bolaky (2008) and with the evidence from the removal of textile quotas in Khandelwal et al. (2013).

Our analysis has potentially important implications for China looking forward. Recent estimates suggest a marked downturn in Chinese productivity both in industry (Brandt et. al. 2017b) and in the aggregate after 2007 (Bai and Zhang, 2017; Dollar, 2017). One possibility is that by the end of this period China had largely exhausted the returns to tariff liberalization. And some of the decline may be tied to effects from the Great Recession on the domestic economy. Domestic policy also may be at work, however. Documents such as China’s 13th Five Year Plan, as well as “Made in China 2025,” point to mounting barriers to entry and protectionism in a widening swathe of industries deemed strategically important by policy makers and Chinese leaders. Cultivation of national champions, for economic as well as non-economic reasons, also continues to be a high policy priority. Ultimately, these forces could be having the exact opposite of the highly beneficial effects we are able to causally associate with the earlier episode of internal and external market liberalization.