In this paper, we show that a general equilibrium model that properly captures the risks in old age, the role of family insurance, changes in demographics, and the productivity growth rate is capable of generating changes in the national saving rate in China that mimic the data well. Our findings suggest that the combination of the risks faced by the elderly and the deterioration of family insurance due to the one-child policy may account for approximately half of the increase in the saving rate between 1980 and 2010. We also show that changes in total factor productivity growth account for the fluctuations in the saving rate during this period.

The gross saving rate in China increased from 36% of GDP in 2000 to 51% in 2010. In comparison, the saving rate was only 15% in the U.S., 19% in Canada, 13% in U.K., 25% in Germany, and 35% in the Republic of Korea in 2010 (see The World Bank data). The high and increasing Chinese saving rate exceeded that of investment in China and resulted in large current account surpluses sparking debate about China’s role in global imbalances. It has often been cited as a potential cause of a variety of economic problems in its trading partners ranging from job losses to the housing bubble (See Note 1).

Researchers have provided a variety of different explanations for the high saving rates in China. For example, Song, Storesletten, and Zilibotti (2011) argue that the increase in corporate saving rates during the period of transition, where the share of traditional firms declined and the share of entrepreneurial firms facing financial constraints increased, gave rise to increased national saving rates. Curtis, Lugauer, and Mark (2015) and Choukhmane, Coeurdacier, and Jin (2013) on the other hand, emphasize the role of demographics and the increase in household saving rates. Wei and Zhang (2011) argue that about half of the increase in the household saving rate in China can be explained by the rising sex ratio imbalance occurring since the late 1980s because families with sons increase their saving rate in order to help their sons compete in the marriage market.

In İmrohoroğlu and Zhao (2017), we examine how the national saving rate is affected by the interaction between risks faced by the elderly (in particular, long-term care risks (LTC risks hereafter)), declining family insurance, and insufficient public insurance.  While the Chinese government initiated a transition to a public pension system in the early 1990s, institutional care for long-term care needs is still almost nonexistent (See Note 2). According to Gu and Vlosky (2008), 80% of long-term care services and more than 50% of the associated costs in China in 2005 were paid by family members. Even though Chinese adult children are expected to take care of their parents, the aging population and the decline in the fertility rate due to the one-child policy are placing strain on these traditional family responsibilities. The projected structure of families consisting of four grandparents and one grandchild for two adult children is expected to make it even harder for children to play a major role in taking care of the elderly in the future.

We show that a general equilibrium model that properly captures the risks in old age, the family structure, and changes in demographics is capable of accounting for the time path of China’s net national saving rates from 1980 to 2010 reasonably well (see Figure 1). 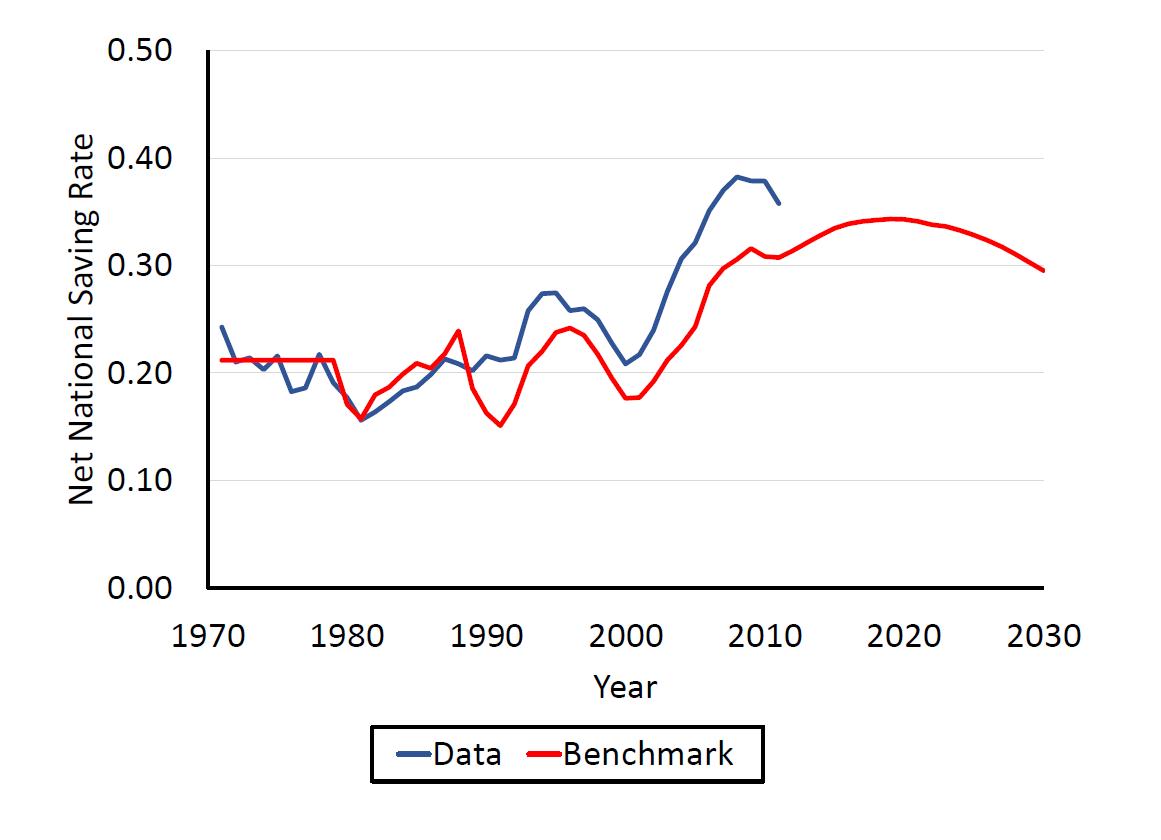 A key feature of our model is risk-sharing within the family, where children play an important role in insuring their parents against LTC risks while parents insure their children against labor income shocks.  This modeling choice distinguishes our paper from Curtis, Lugauer, and Mark (2015) and Choukhmane, Coeurdacier, and Jin (2013), who also emphasize the role of demographics. These studies model children either as pure consumption goods or as investment goods with fixed returns, independent of the state of the parents (such as their financial and health statuses). Consequently, children have no insurance role in their models. However, data from the China Health and Retirement Longitudinal Study reveal that the transfers from adult children to elderly parents (both financial and in terms of time) are not only substantial but also highly correlated with the financial and health status of the parents.

Figure 2 summarizes the cross-section profiles of the net transfers from children to parents in the whole population as well as for low- and high-income households. The vertical axis plots the average amount of transfers (measured as a percentage of the average disposable income of the population), where positive numbers indicate a net transfer from the children to the parent and negative numbers indicate a net transfer from the parent to the children. The horizontal axis measures the average age of the children. According to these results, transfers to parents in households with low-income parents are substantially higher than in households with high-income parents for each age group. This finding is consistent with our two-sided altruism assumption, which implies that parents and children transfer resources to smooth consumption within family members. 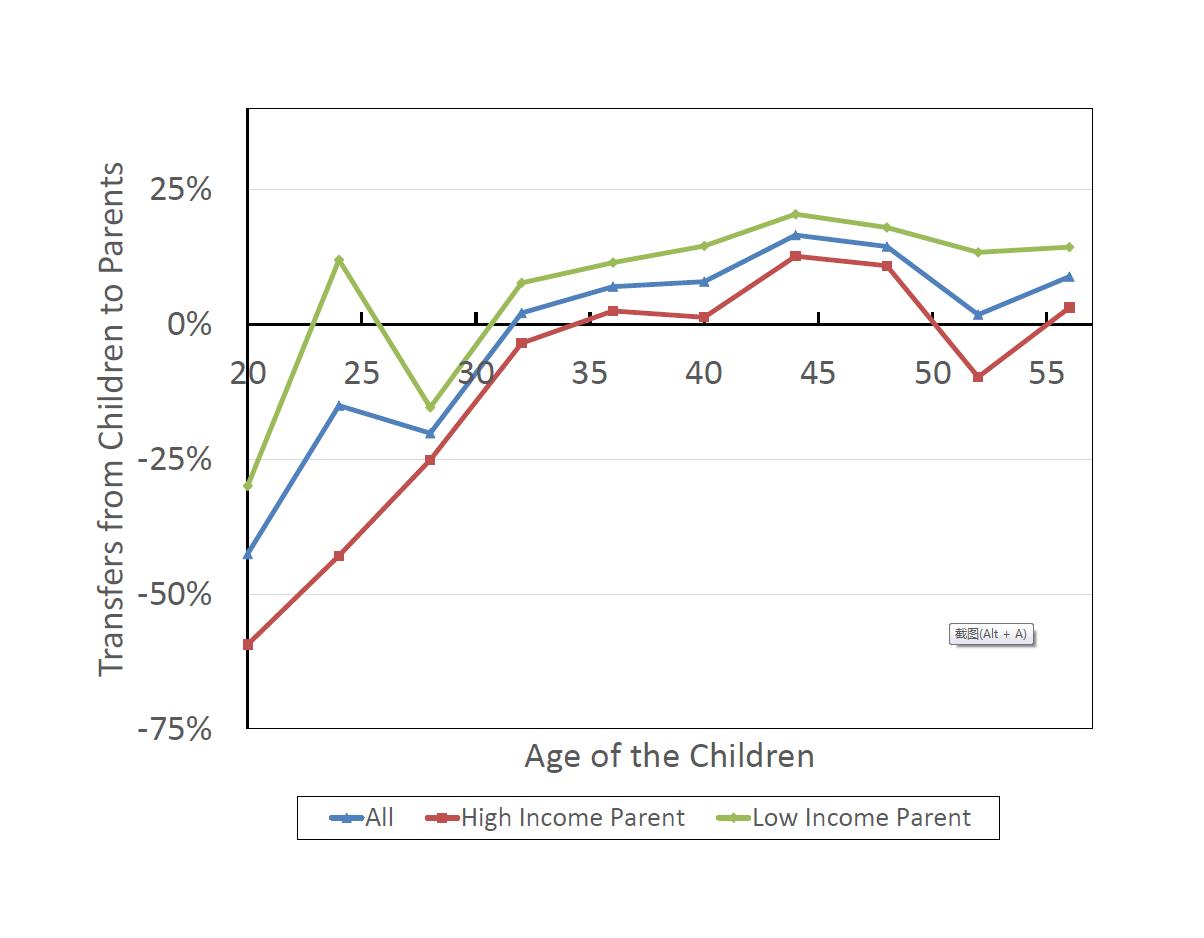 Our dynastic model with two-sided altruism is able to capture the relationship between transfers from the children and the parent's financial and health status. Our quantitative results show that because the one-child policy partially destroys this type of family insurance, personal saving rates rise to provide insurance against risks faced in old age.

A large strand of the literature on China’s saving rate has focused on partial equilibrium models of household saving rates with exogenously given interest rates. For an exception, see the discussion in Banerjee, Meng, Porzio and Qian (2014). Our model is also able to account for the fairly large fluctuations in the national saving rate, a feature that has been understudied in the literature. Our general equilibrium framework captures the impact of changes in total factor productivity (TFP) growth, and we find that changes in TFP growth are responsible for most of the fluctuations in China’s saving rate during the last several decades. In the general equilibrium framework, periods of high TFP growth rates are associated with periods of high marginal product of capital, resulting in high saving and investment rates. As Bai, Hsieh, and Qian (2006) document, the rate of return to capital has indeed been very high in China. While there is evidence that average households may not have access to assets with high returns, (see, for example, Song, Storesletten, Wang, and Zilibotti (2014)), in a general equilibrium setting, these returns will eventually accrue to individuals in the economy.

Our results also highlight the importance of government-provided safety nets in impacting the saving rate. We show that an increase in the social security replacement rate or government-provided programs, similar to Medicaid or Supplemental Security Income in the U.S, aimed at helping the most unfortunate elderly, have a significant impact on the aggregate saving rates. Any comparison of saving rates in countries with family structures and demographics similar to China, such as Japan or South Korea, would have to take into account the differences in such government programs as well as differences in productivity, taxes, and the risks faced by the elderly. For example, according to the OECD (2005), net replacement rates (individual net pensions relative to individual net earnings) were 60% and 44% in Japan and South Korea for the average earner and 80% and 65% for the lowest earners. While reported net replacement rates in China are also high, 80.5% for the average earner and 102.2% for the lowest earner, the coverage rates in China are very low. According to Gu and Vlosky (2008), 40-50% of the elderly in cities and more than 90% of the elderly in rural areas did not have a pension in 2002 and 2005. In light of our findings, the differences in the saving rates between Korea, Japan, and China need not be surprising, even if these countries are experiencing similar changes in demographics.

It is important to note that the policy implications of our findings are quite different from the literature. For example, the expected increase in government-provided social insurance is likely to have a different impact on the future saving rates in China if the current high saving rates are indeed due to lack of insurance in old age as opposed to other mechanisms discussed in the literature, such as the unbalanced sex ratio, reduced child-raising expenses (such as education costs) resulting from the one-child policy, or changes in demographics.  Identifying the right reasons behind the high saving rates in China is important, not only for understanding the Chinese economy, but also for understanding the future path of China’s saving glut that has impacted the world economy.

Note 2: Long-term care need is defined as a status in which a person is disabled in any of the six activities of daily living (eating, dressing, bathing, getting in and out of the bed, inside transferring, and toileting) for more than 90 days.