The announcement on May 17, 2013 that CPC’s Central Commission for Discipline Inspection (CCDI) would start to conduct several rounds of inspections of provincial governments, may serve as a rare natural experiment to examine the equilibrium consequences of corruption on firms. Professors Haoyuan Ding of Shanghai University of Finance and Economics, Hanming Fang of the University of Pennsylvania, and Shu Lin and Kang Shi, both of The Chinese University of Hong Kong exploit event studies to show that the stock market overall reacted positively to the CCDI announcement, and they also show that there is interesting heterogeneity across firms in their reactions to the news. They argue that the CCDI announcement on May 17, 2013 has likely triggered an expectation of norms change of bureaucratic behavior.

Corruption is a widespread phenomenon in many developing and transitional economies. In China, official corruption has risen significantly over the last three decades. Immediately after the conclusion of the 18th National Congress of the Communist Party of China (CPC) on November 14, 2012, the new leadership of China headed by President Xi Jinping launched an anti-corruption campaign. This anti-corruption campaign has turned out to be unlike past campaigns and is still ongoing, which has led many observers to conclude that it is “more severe, far-reaching and persistent than any other” (e.g., The Economist, 2014). To date, this new anti-corruption campaign has punished over 160 officials whose ranking is at the vice-ministerial level or higher, and more than 270,000 lower-level bureaucrats.

In our paper (Ding, Fang, Lin, and Shi, 2017), we argue that the anti-corruption campaign, particularly the announcement on May 17, 2013, that CPC’s Central Commission for Discipline Inspection (CCDI) would conduct several rounds of inspections of provincial governments, serves as a rare natural experiment to examine the equilibrium consequences of corruption on firms.

Corruption and Economic Development: The Nexus?

There are different views of the effect of corruption on economic development (see Bardhan, 1997, and Fisman and Golden, 2017). The conventional wisdom is that the “grabbing hands” of bureaucrats increase the cost of operating businesses, leading to less entry on the extensive margins and to smaller scales on the intensive margins (e.g., Klitgaard, 1991; La Porta, et al., 1999; Shleifer and Vishny, 1993). An alternative view, first put forth by Leff (1964), argues that in an environment with excessive bureaucratic burden, corruption can be the “grease for the squeaking wheels” that may help firms avoid bureaucratic delays and make government officials work harder.

Empirical Challenges to Evaluate the Equilibrium Effects of Corruption on Firms

The second empirical challenge is that it would likely take a long time for the equilibrium outcomes following the shift of the corruption norm to fully manifest themselves; but during the long time horizon many other factors can also change, which would then make it harder to distinguish the effects of the changes in the corruption norm from the effects of other concurrent changes.

Why Was the CCDI Inspection Announcement on May 17, 2013, a Special Event?

Anti-corruption has been an official theme since President Xi Jinping officially became the Party Secretary in the Eighteenth National Congress. The first official pronouncement of the anti-corruption campaign was the Eight-point Regulation announcement on December 4th, 2012, just weeks after the end of the Eighteenth National Congress. Lin, Morck, Yeung, and Zhao (2017) focused on this event. The Eight-point Regulation was a significant event, but there are at least four arguments supporting the view that it was unlikely to be the event that signaled that this anti-corruption campaign would be different from past campaigns:

1.  The Eight-point Regulation was issued very shortly after the 18th National Congress, and this was a routine action taken by a new leadership. Therefore, to the officialdom, this might still have suggested the temporary nature of the campaign.

2.  The Eight-point Regulation did not specify punishments or enforcement.

In contrast, the CCDI inspection announcement on May 17, 2013, was unprecedented. The announcement that the inspections would eventually cover all provinces, Ministries, major SOEs, and universities suggests that the anti-corruption campaign would be the new, lasting norm. Indeed, as of this writing, a total of twelve rounds of inspections have been conducted. There are no signs of slowing and some agencies have been inspected more than twice. On July 17, 2017, Wang Qishan, the CPC Politburo Standing Committee member in charge of CCDI, wrote in the People’s Daily that CCDI inspections are now a “strategic institutional arrangement” to curb and prevent corruption by CPC government officials.

What Do We Find?

We use stock returns and financial data extracted from the China Stock Market and Accounting Research Database (CSMAR) maintained by GTA Information Technology. Our sample includes 2258 non-financial companies publicly listed as of the end of 2012. We first estimate a market model over a 180-day estimation window ending 11 days before the announcement date of May 17, 2013. We adopt a value-weighted average return of all stocks in our sample as the market return. We then calculate cumulative abnormal returns (CARs) over an 11-day (-5, 5) event window centered on the inspected announcement date (May 17, 2013) and test their statistic significance. For robustness we also use other measures of CARs.

Table 1 summarizes our basic finding. The average CARs over an 11-day window indicates that the market gains 2.818% in the 11-day event window on average. We find only 774 out of 2258 firms decline in the 11-day event window. This basic finding is robust to other measures of CARs or different event windows. This suggests that the weakening of the “the grabbing hands” and/or the expected equilibrium reductions in bureaucratic red-tape following the unprecedented announcement of CCDI inspections generates positive effects on firm performance overall, more than compensating for the possible reduction in the “greasing of the wheels.”


Table 1. Stock Market Reactions to CCDI Inspection Announcement
on May 17, 2013 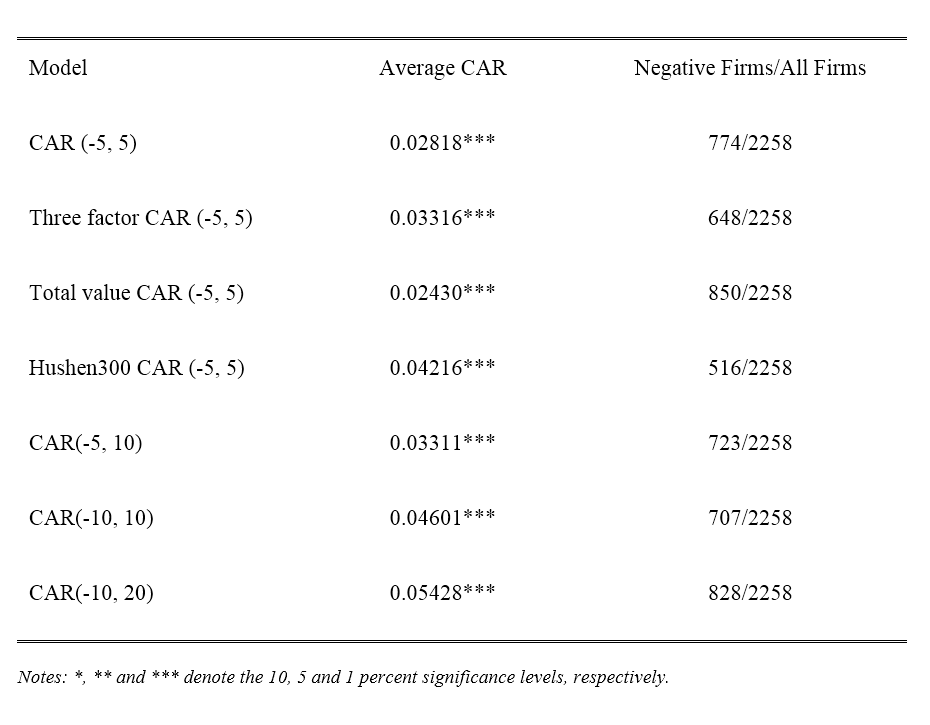 In additional regression analyses, we examine the heterogeneous impact of the CCDI announcement on firm CARs. First, the CARs are found to be significantly lower for firms that produce luxury goods, which are often used as gifts to bribe government officials (e.g., Cai, Fang, and Xu, 2011; Fang, Gu, and Zhou, 2014; Qian and Wen, 2015). Second, we find that the CARs are significantly higher for private firms than for SOEs, higher for small firms than for big firms, and higher for firms with no established political connections than those with connections. Our finding that the CARs are higher for private firms than for SOEs differs from that of Lin, Morck, Yeung, and Zhao (2016), who examine the market response to the Eight-point Regulation announcement on December 4, 2012. The more positive market reactions for private firms following the CCDI inspection announcement, but not for the Eight-point Regulations announcement, may suggest that the former triggered expected equilibrium reactions in bureaucratic behavior while the latter did not. Without the equilibrium reactions in bureaucratic behavior, which reduces the red-tape and regulations that were established for rent-seeking purposes, private firms will benefit from the Eight-point Regulations because they can now bear lower costs to satisfy the “grabbing hands,” but they also lose the “greasing of the wheel” quid pro quos from the bureaucrats; in contrast, the SOEs may still receive the quid pro quos from the bureaucrats if the bureaucrats expect the campaign to be only temporary.

Finally, there is also evidence that local institutions matter. While private, small firms or firms without political connections earn higher announcement returns than state-owned, large, or connected firms, the return differentials are significantly lower in provinces with better legal protections (where there is a smaller grabbing-hand effect) or less developed factor markets (where there is a larger greasing-of-wheel effect).

Fisman, Ray and Miram A. Golden (2017). Corruption: What Everyone Needs to Know. Oxford University Press.