Does Spatial Misallocation in China’s Housing and Land Markets Drive Up Housing Prices? 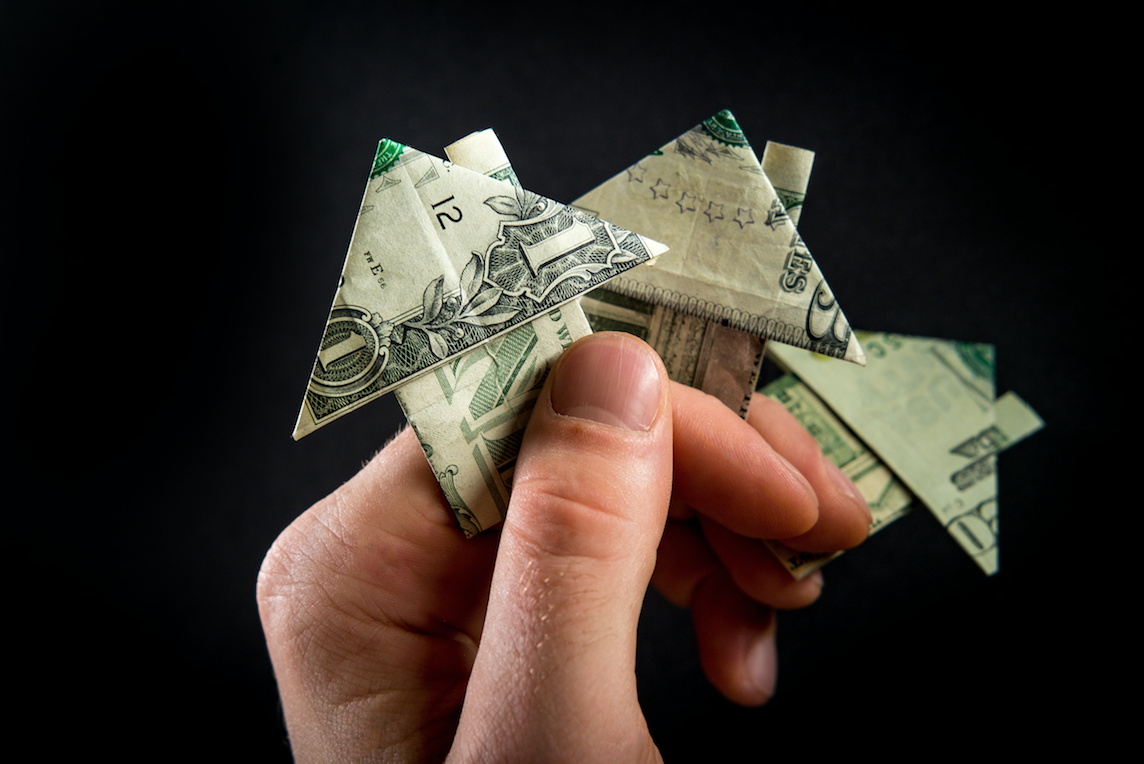 China’s Soaring Housing and Land Prices
Since the second half of the twentieth century, the world has witnessed massive urbanization across countries. Many developing economies have transitioned from rural to urban much more rapidly than developed ones. Lucas (2004) provided a theoretical model to study the role of cities as places of transition from a traditional, land-intensive agricultural society to a human-capital-intensive society with sustained growth opportunities. In Lucas’s world, there are only two regions, and migration decisions are made in with perfect foresight. Hsieh and Moretti (2019) studied 220 metropolitan areas in the United States. They found spatial misallocation of labor across US cities because superstar cities like New York and the San Francisco Bay Area have implemented harsh restrictions on the new housing supply.

China is one of those economies undergoing rapid urbanization, however, with distinct institutional settings. The country’s urbanization story is also characterized by a recent spectacular boom in its housing and land markets (Wu, Gyourko, and Deng 2012, Glaeser et al. 2017). Desmet and Rossi-Hansberg (2013) studied a system of Chinese cities by decomposing the determinants of the city size distribution into efficiency, amenities, and frictions. They find that welfare effects from these Chinese cities are many times larger than those in the US. Figure 1 shows the soaring housing and land prices in Chinese markets, especially in tier-1 cities. 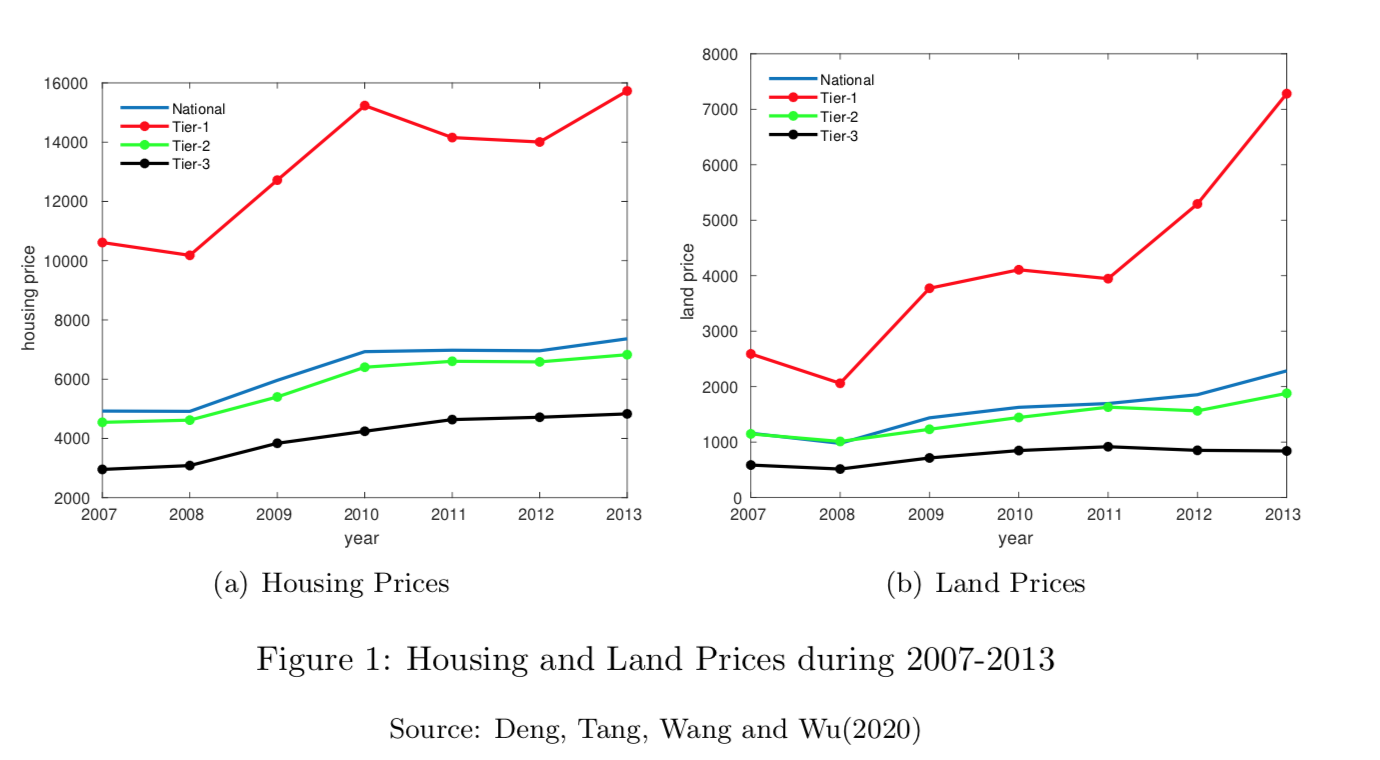 A Dynamic Spatial Equilibrium Model
We propose a dynamic spatial equilibrium framework with endogenous rural-urban migration and developer entry. Our model allows us to better understand the severe spatial misallocation in China’s land and housing markets led by various housing and land regulatory policies implemented at the city level, together with labor market frictions caused by the household registration (hukou) system, etc. The model extends the factor misallocation literature (Hsieh and Klenow 2009, Hsieh and Moretti 2019) by incorporating housing and land market frictions to measure misallocation across space (rather than across firms).

Our model provides rich micro-foundations and identifies three potential key drivers that determine housing and land prices: 1) Rural to urban migration stimulated by higher income and faster growth in urban area serves as an extensive margin that drives up housing prices. In addition, the larger urban population also drives up the housing demand at the intensive margin. This mechanism is further corroborated in Figure 2. Larger cities tend to receive a bigger population inflow due to higher wages, and experience faster growth in housing prices. 2) Cities with a sufficient land supply from the local government tend to have lower prices in their land and housing markets. 3) Subsidized housing developers and a less competitive land market may push housing prices away from their levels in the economy without frictions. Finally, the dynamic model takes into account the intertemporal interaction between migration decisions and housing price growth. If migrants anticipate housing prices may grow faster in the future, they may choose to migrate earlier. On the other hand, they may delay their migration if housing prices are expected to fall. 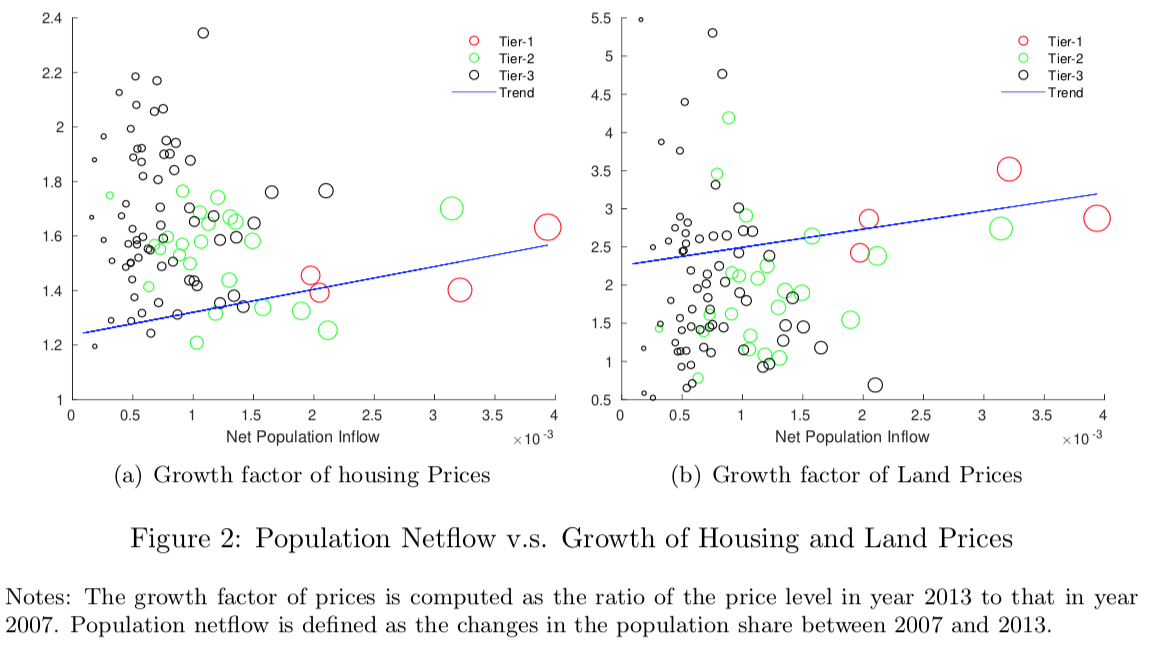 Large Dispersions in Housing and Land Frictions
Housing/land frictions measure gaps between prevailing housing/land prices and their competitive equilibrium counterparts. When they exceed their competitive equilibrium counterparts, we have negative wedges that are equivalent to subsidies; on the contrary, positive wedges can be viewed as taxes. For example, publicly provided housing or housing price control can cause negative housing wedges; strict zoning or less established land auctions can lead to positive land wedges. Thus, housing frictions primarily affect housing developers’ sales revenue, while land frictions mainly affect the marginal product of the land. The model distinguishes housing frictions from land frictions. Despite developers being concerned only with the net effect, housing and land frictions have differential effects on housing/land prices and macroeconomic indicators.

We found pervasive spatial misallocations in the housing and land markets in China. On average, developers are subsidized at 133% of housing sales revenue, yet taxed at 152% of land purchasing cost relative to their competitive benchmarks. We also documented large dispersion in housing frictions: cities at the upper quantile (75%) of the housing frictions distribution are subsidized at about 62% of the housing sales revenue, while those at the lower quantile (25%) are subsidized around 176%. That implies a significant interquartile range of 114 percentage points. The dispersion in the land market frictions is even worse, with the interquartile range of 205 percentage points (i.e., upper quantile cities are taxed at 212% of the land sales, while lower quartile cities are taxed at 7%).

At the city level, housing frictions are found to increase with city size as shown in panel (a) of Figure 3. Housing frictions are closer to zero in tier-1 cities and mostly negative in all the other cities. This suggests that policies that aim at cooling down housing markets do not effectively apply to smaller cities. Housing is still subsidized in either explicitly or implicitly in tier-3 and tier-4 cities. Land frictions were mostly positive in all the cities from 2007 to 2013. Although we do not find any significant relationship between city size and land friction, a positive correlation still implies that land sales in larger cities tend to be taxed less. The residential land market in larger cities is more competitive, with a better-established land auction market and thus closer to that in an economy without frictions. This is further reflected in Figure 4, which uses the average share of the top 20 buyers in the local residential land market to measure local land market concentration and competitiveness. It shows that the share is lower in tier-1 and tier-2 cities than in other cities. 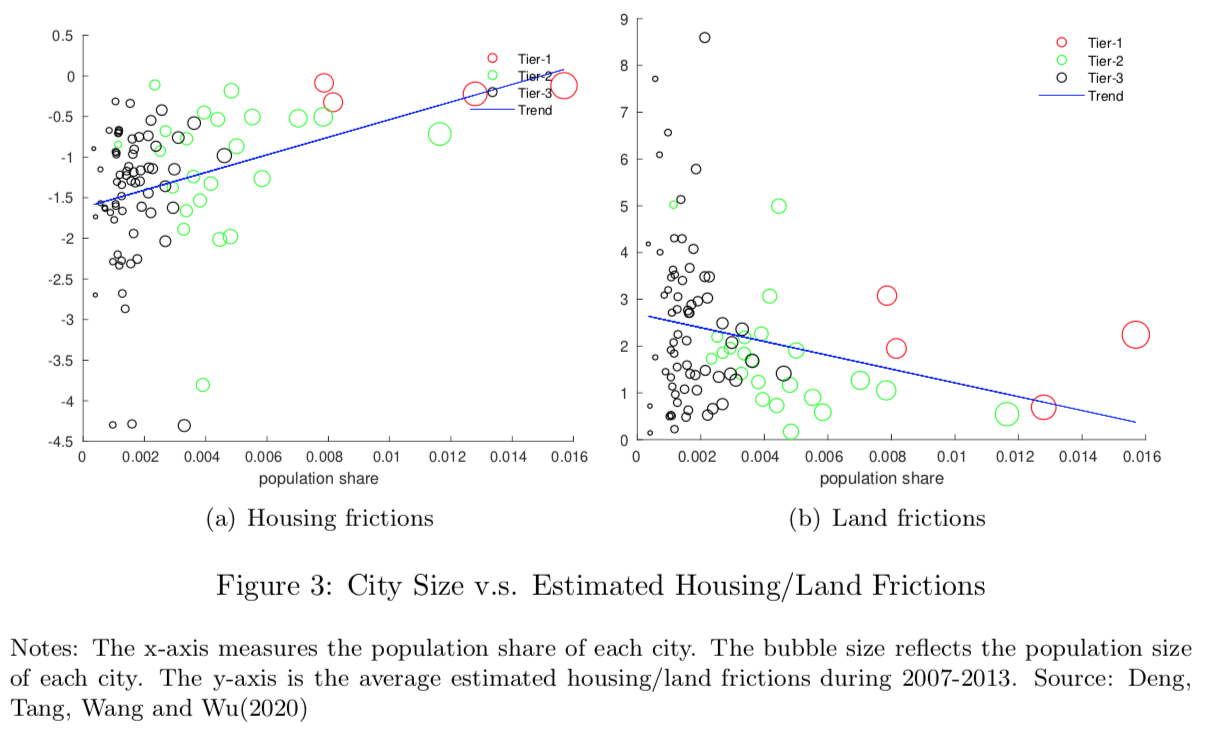 Our estimations also show that while the spatial spread of housing frictions has been persistent, the spread of land frictions dropped by more than half over the years. This is consistent with the pattern in Figure 4: the market share of land developers appears to decline over time. Together these imply that land market reform is a gradual process, and may take longer to complete in smaller cities. 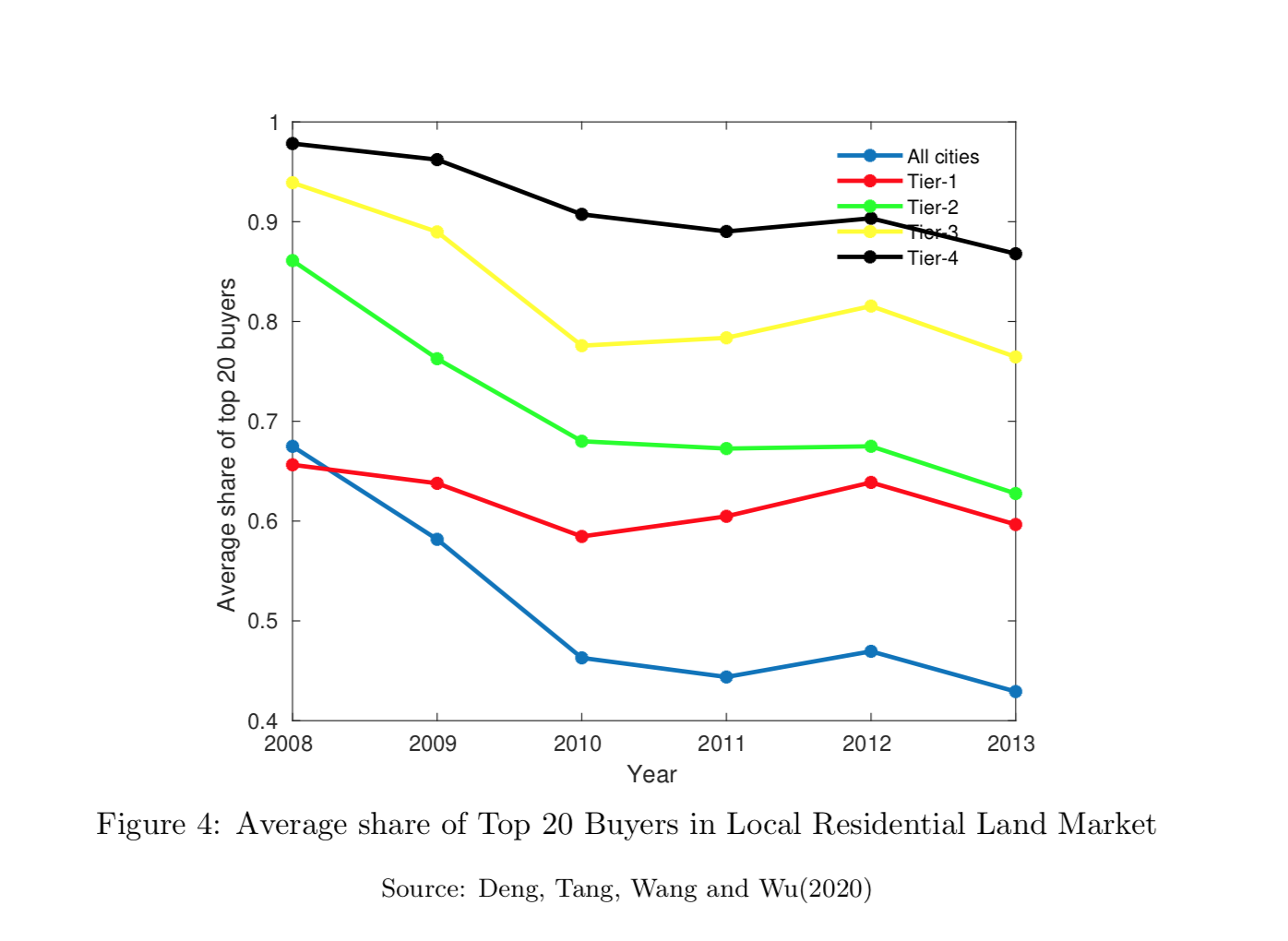 Moving to a frictionless economy, we find when housing developers are no longer subsidized in a format such as pre-sale arrangements or without help from the local government’s unexpected investment in amenities, housing prices increase in most cities. In contrast, housing prices decline in tier-1 cities due to the removal of existing stringent restrictions on developers for the purpose of cooling down the housing market. In the frictionless economy, land is more expensive in all the cities due to stronger market competition and higher housing prices. In terms of price growth, housing prices grow faster than the data in the majority of tier-1 and tier-2 cities. By contrast, land prices grow slower than the data in all tier-1 and tier-2 cities.

Welfare Implications
We also evaluate the welfare implications when both frictions are removed. We find unequal welfare gain/loss at the city-tier level. While tier-2 and tier-3 cities enjoy welfare gain, tier-1 cities suffer from welfare loss. This suggests that removing large housing subsidies in tier-2 and tier-3 cities tends to drive up housing prices, while housing prices change less dramatically in tier-1 cities since frictions are closer to zero. Together, these trigger more rural migrants to settle in tier-1 cities.

Conclusion
We find pervasive city-level frictions caused by various intervention policies in the housing and land markets implemented by local governments. They not only affect immobile housing and land markets, but also influence resource allocation given the significant proportion that housing takes up in household expenditure. Removing frictions brings welfare gain to urban residents but discourages the urbanization rate. Migrants’ welfare is improved at the cost of that of the incumbent owners.