Innovation versus imitation: Where all that Chinese R&D is going

China is aiming to become a technological innovation powerhouse by 2050, with Premier Li Keqiang recently announcing an increase in R&D investments by 7% for the next five years. But greater R&D investment is no guarantee of success. This column examines the effects of R&D investments by Chinese firms on aggregate productivity and growth. The authors find that while innovation plays an important role in China’s growth process, the productivity of innovation could be substantially enhanced by reducing distortions in the economy, and further stimulating R&D expenditure is neither necessary nor sufficient to sustain growth. 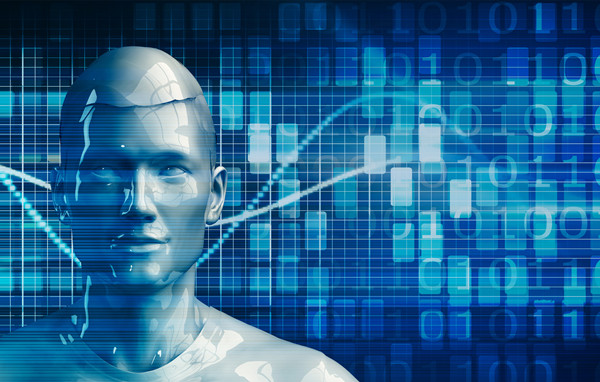 In March 2021, Premier Li Keqiang announced China’s objective to increase R&D investments by 7% per year between 2021 and 2025. This target impacts an already large base. In terms of total R&D spending, China is currently second only to the United States. Even as a share of GDP (2.4% in 2020), China invests more than richer economies like the EU or the UK. China’s National Innovation-Driven Development Strategy states as a goal for the country to become a technological innovation powerhouse by 2050.

But is China actually on path to achieve such an ambitious goal? Larger and larger R&D investments is no guarantee of success. A recent paper by Chen et al. (2021) analyses InnoCom, a programme providing incentives for R&D investment through corporate income tax cuts. The authors show that many Chinese firms respond to R&D subsidies by relabelling non-R&D expenditures as R&D expenses. Zilibotti (2017) warns of the limits of a top-down approach to innovation. Economic reforms improving investor protection and the independence of the judiciary system are preconditions for nurturing the type of grassroots innovation culture which flourished earlier on in some Western nations. These reforms are difficult to fit in the current institutional framework.

R&D misallocation
Another reason for R&D expenditures to be potentially inefficient is misallocation. The investments could be carried out by the wrong firms and in an ineffective way. China’s economic policy biases resource allocation in favour of state-owned firms and private firms that are connected to the state (e.g. Song et al. 2011, Hsieh and Song 2015, and Bai et al. 2020). However, to date, the literature is silent on how R&D and its misallocation affect innovation and long-run economic growth.

In a forthcoming paper (Koenig et al. 2022), we propose the first evidence-based assessment of the effects of R&D on Chinese growth. The novelty of our methodology is the use of firm-level data to estimate a dynamic general equilibrium model that bears predictions about the effects of R&D investments on aggregate productivity and growth.

Innovation and random interactions
Our theory features endogenous technical change driven by innovations which diffuse across firms through random interactions in the vein of Koenig et al. (2016). The evolution of the total factor productivity (TFP) distribution is determined by the activity of profit-maximising firms seeking to improve their technology over time. Each firm can attain this goal by either imitating technologies already used by other firms or pursuing more fundamental innovation. An innovation strategy requires an R&D investment and possibly reduces the focus of the organisation on imitating other firms. A firm’s position in the TFP distribution determines its comparative advantage in pursuing either strategy. Firms closer to the technology frontier have a stronger drive to invest in innovation because they face fewer opportunities to improve their technology by imitating other firms. Critically, the R&D decisions are distorted by firm-specific wedges `a la Hsieh and Klenow (2009). Some large but not very productive firms have stronger private incentives to invest in R&D than smaller, ‘constrained’ high-productivity firms. This is socially inefficient because the positive knowledge spillovers hinge just on productivity, not on size.

The theory bears four salient testable predictions:
1. The probability that a firm invests in R&D is increasing in its TFP.
2. Conditional on TFP, larger firms are more likely to engage in R&D.
3. Expected TFP growth is falling in current TFP, especially for non-R&D firms.
4. R&D firms experience higher future TFP growth than non-R&D firms, more so among high-productivity firms.

Evidence and structural estimation
These predictions are borne out in the data from the census of Chinese manufacturing firms for the period 2007–12. Figure 1 shows four patterns. Panel A shows the share of R&D firms by TFP percentile. The share of R&D firms almost doubles as one moves from the lowest decile to the top percentile of the TFP distribution. Panel B shows that firm size is also positively correlated with the share of R&D firms (a feature that holds true even if one keeps TFP constant). Panel C shows that the TFP growth rate is decreasing in TFP among non-R&D firms (convergence). Finally, Panel D shows that TFP growth is significantly higher for R&D firms than for non-R&D firms at most percentiles, especially for high TFP firms. 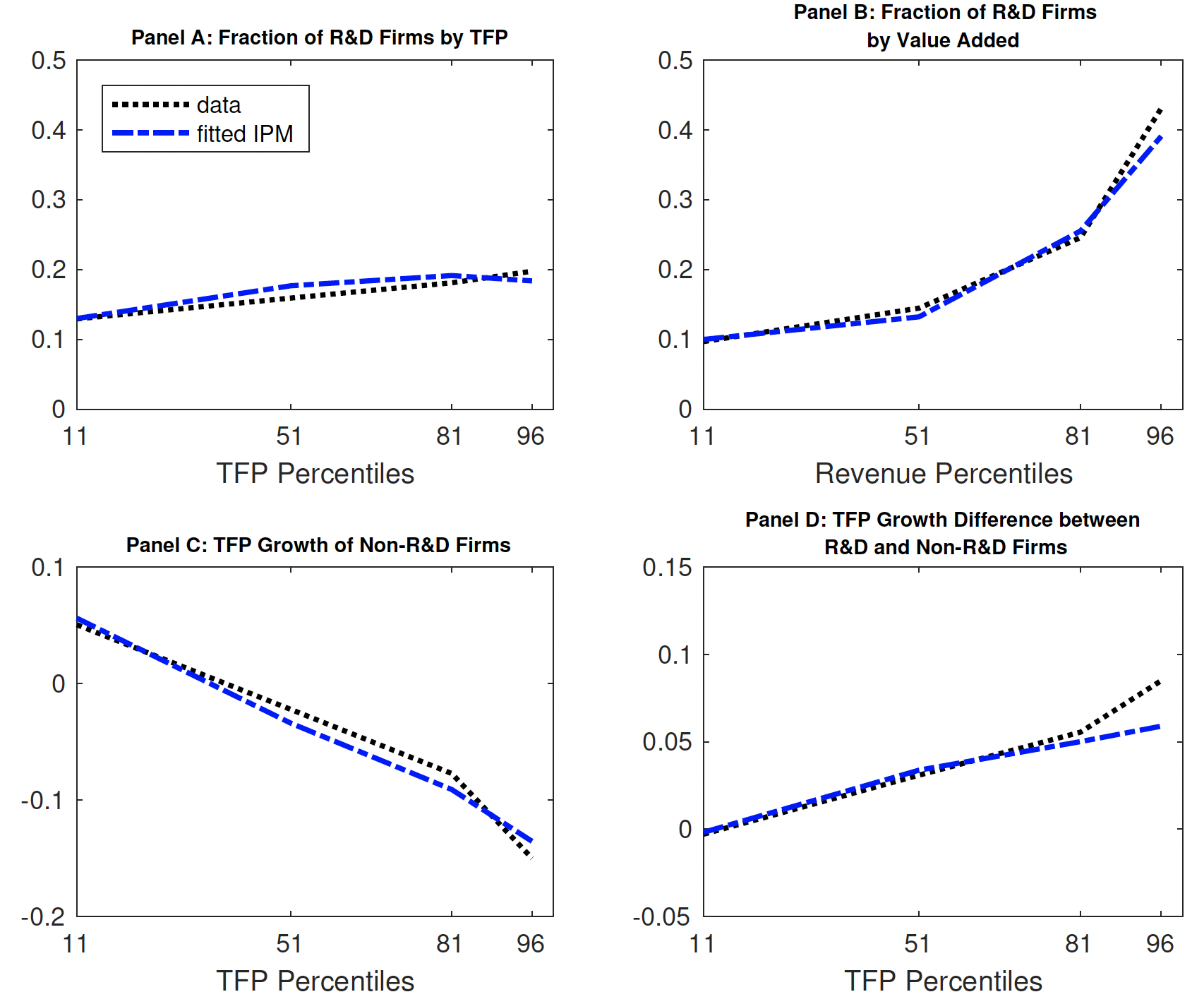 
Notes: The figure shows the data and the fit of the model refer to as IPM in Koenig et al. (2022). The X-axis in Panel A, C and D is the total factor productivity (TFP) percentiles defined on four intervals: the 10th to 49th, the 50st to 79th, the 80th to 94th and the 95th to 99th. The X-axis in Panel B is the first-period value added percentiles defined on the same four intervals. The solid lines in Panel A and B plot the fraction of R&D firms in each TFP and value added interval, respectively. Panel C plots the median annualized TFP growth among nonR&D firms in each TFP interval in the data against the corresponding expected growth rate for firms in the model. Panel D plots the difference between the median TFP growth between R&D and non-R&D firms in the data against the corresponding difference in the model.

We use these data to structurally estimate our growth model. The estimated model accurately fits the four panels both qualitatively and quantitatively, as the figure shows. At the aggregate level, the theory predicts that the productivity distribution is a travelling wave, namely, a stationary distribution whose average grows at an endogenous constant rate. The dispersion of the productivity distribution is also endogenous. While we do not target any of the aggregate moments in the estimation, the estimated model predicts both a growth rate and a dispersion of productivity that are in the ballpark of the empirical observation. The fit of the data further improves if we augment the theory with some selective industrial policy or if we allow some firms to fudge R&D – for example, by relabelling as R&D ordinary expenses in order to cash in subsidies, in line with the findings of Chen et al. (2021). In this case, the estimated proportion of fudging firms is moderate, at below 10%. Last but not least, we document that firms investing in R&D are on average more likely to patent innovations in the following years. This, together with the evidence that TFP grows faster for R&D than for non-R&D firms, indicates that a significant part of the R&D expenditure bears fruit in terms of innovation.

Altogether, our analysis indicates that already in 2007–12 R&D was an important determinant of aggregate productivity growth in China, despite large distortions attenuating its benefits. The result is robust to introducing international knowledge spillover in the theory. In a counterfactual policy experiment, we find that a moderate increase of R&D subsidies across the board could enhance TFP growth, although an overly generous subsidy policy would backfire and reduce growth by hindering technology diffusion. Reducing misallocation (e.g. state support to politically linked firms) would also have a powerful (and potentially less expensive) growth-enhancing effect.

Mainland of China vs. Taiwan
We also estimate our model on firm-level census data from Taiwan. The qualitative patterns we document in the figure for mainland of China are similar in the Taiwanese data: more productive and larger firms are more likely to engage in R&D firms investing in R&D grow faster than the other firms. In fact, the TFP growth differential for R&D firms is larger in Taiwan than in mainland of China. Estimating the model confirms that R&D investments are more productive in Taiwan than in mainland of China. Because Taiwan is a more advanced economy, the finding that R&D is a more salient source of growth in Taiwan are consistent with the prediction of Acemoglu et al. (2006) that the importance of innovation increases as economies approach the world technology frontier. If Chinese firms had access to the same technology to create new ideas that Taiwan firms use, aggregate productivity growth would be higher.

Taking stock
The take-home messages of our study are the following:
1. Despite pervasive distortions in the allocation of labour and capital, innovation plays an important role in the growth process of China
2. The productivity of innovation could be substantially enhanced by reducing distortions in the Chinese economy.
3. Further stimulating R&D expenditure is neither necessary nor sufficient to sustain high growth. There is even a risk of too much of a good thing. Improving institutions and making sure that the more productive firms do R&D (e.g. by alleviating credit constraints) is no less important.
Our results are subject to a few caveats. Most important, we focus on the period 2007–12, when growth is still relatively strong for the Chinese economy. More recently, there are signs of productivity slowdown (Chen et al., 2019). We expect that innovation has not decreased its relative importance as a source of growth, but this conjecture requires additional empirical validation.
Our column is related to a number of recent VoxEU publications, including Akcigit et al. (2017) on the determinants of innovativeness, Akcigit et al. (2020) on the role of innovation policies for economic growth, Shen a et al. (2016) on the technology gap between China and the US, Storesletten et al. (2010) and Zilibotti (2016) on the growth and slowdown of China in recent decades, and Schweiger et al. (2021) on the long-run effects of R&D place-based policies.

(This article was first published on VoxEU: https://voxeu.org/article/innovation-versus-imitation-where-all-chinese-rd-going)