We infer the impact of the US-China tariff war on China’s economy, using high-frequency satellite data on nighttime luminosity. Through a grid-level panel analysis, we find evidence that the US tariffs levied between 2018–2019 on China’s exports had a negative impact on income per capita and manufacturing employment that was very skewed across locations within China. By contrast, China’s retaliatory tariffs on imports from the United States did not have a discernible impact on economic outcomes at the local level. 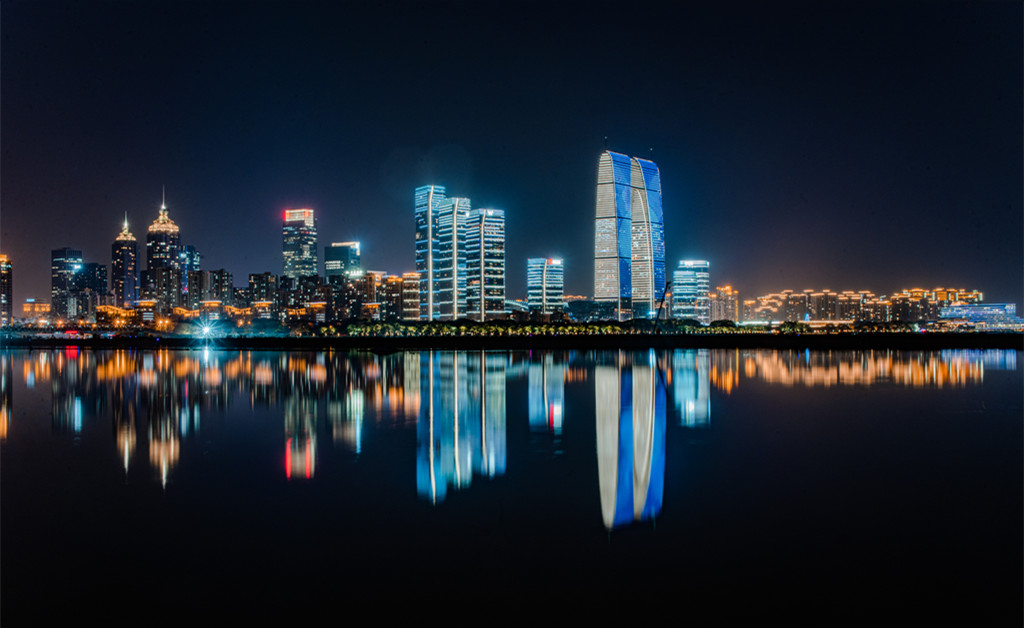 In early 2018, the Trump administration commenced a series of tariff actions that raised duties on China’s exports to the US successively over the next two years. After each round of these US tariffs, China’s government responded with retaliatory duties on goods imported from the United States. By September 2019, both sets of tariffs had been extended to cover most products traded between the two countries (see Note 1). These tariffs negatively impacted bilateral trade flows (Amiti et al. 2019; Fagjelbaum et al. 2020) and have become a persistent thorn in the side of US-China relations.

Did the US tariffs on Chinese exports have a negative impact on economic activity within China, and if so by how much? Likewise, did China’s retaliatory tariffs affect domestic production, given that these would in principle have raised the cost of inputs sourced from the United States?

There is now a fairly large body of empirical evidence on the effects of this “tariff war” on the US economy. Researchers have documented that there has been an almost complete pass-through of the tariff burden to US prices (Amiti et al. 2019; Cavallo et al. 2021). The tariffs have also adversely affected domestic consumption (Waugh 2019), investment (Amiti et al. 2020), and employment (Flaaen and Pierce 2019) in the United States.

By comparison, less is known about the impact (if any) that the tariff war has had on China’s economy, hence motivating the two research questions posed above. This is not due to a lack of interest in these questions, but rather reflects constraints on data availability. In particular, China’s statistical agencies do not regularly disclose data on output and employment at the subnational level or for detailed industries; such data, as they do become available, are often subject to reporting lags (see Note 2).

Given these data limitations, we turn to satellite readings on nighttime luminosity. Such measures of night lights have come into increased use as a proxy for the intensity of human-generated activity in otherwise data-scarce settings. The economic growth and development literatures have shown that night lights are strongly correlated with more conventional measures of economic performance such as GDP (Chen and Nordhaus 2011; Henderson et al. 2012). Night lights data have also been used more recently to study the short-run responses to macroeconomic shocks across locations within a country (Chodorow-Reich et al. 2019) (see Note 3). The night lights data afford us a degree of spatial resolution—at the level of 11  km-by-11 km grid cells—that would be hard to achieve with other sources of data. The satellite readings are also less subject to concerns about data manipulation.

Figure 1 below provides an example of the variation across locations that the night lights data reveals. The figure plots nighttime luminosity in the prefecture city of Suzhou, in Q1/2018 and Q1/2019 respectively. Night lights dimmed to a greater extent in the two highlighted regions— the Huqiu New and Hi-Tech Zone and the Suzhou Industrial Park—relative to the rest of Suzhou (see Note 4). The decrease in night lights intensity was greater in these two manufacturing zones that feature a high export-intensity, suggesting a possible link to the tariff war. If export demand took a hit from the US tariffs, the resulting contraction in production and in labor demand would reduce lights emitted from factory night-shifts and from the worker dormitories often situated in close proximity within China’s industrial areas. 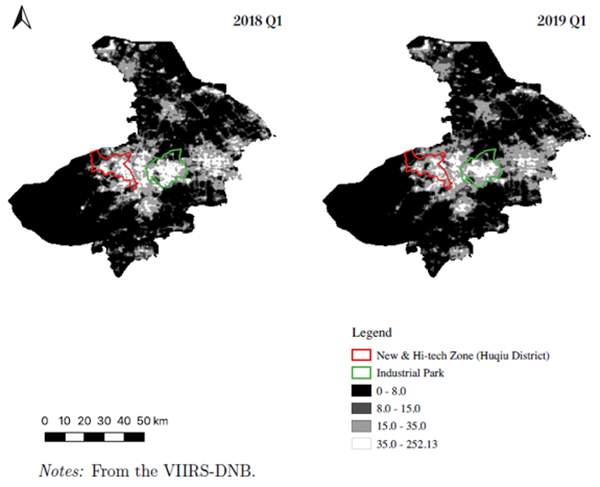 More formally, we perform this analysis using a panel dataset of quarterly observations assembled for the nearly 100,000 grid cells that span the Chinese mainland. To credibly isolate the effects of the tariffs, we implement a shift-share empirical strategy. To assess the impact of the US tariffs on Chinese exporters, we construct a measure of a grid location’s exposure to these tariffs that makes use of the composition of grid-level exports prior to the tariffs. Intuitively, locations within China would be more exposed if they initially specialized in selling products to the United States that were later subjected to larger tariff increases. At the same time, we construct an analogous measure of a grid location’s exposure to China’s retaliatory tariff actions using the composition of pre-tariff imports of intermediate inputs and capital goods, as well as the product-level retaliatory tariffs that were subsequently imposed. The empirical strategy we pursue requires detailed information on the structure of China’s trade flows at the grid level. We construct this by geo-locating firms in the 2016 Chinese customs data to grid locations using web-based mapping services (Google Maps and Amap).

Our central result is that locations within China that were more exposed to the US tariffs experienced a larger decrease in night lights intensity, pointing to a contraction in local economic activity (see Note 5). These findings are obtained using a specification that includes grid and prefecture-time fixed effects. We moreover control extensively for pre-trends that might be associated with other initial grid characteristics, such as openness to trade (initial grid exports per capita, grid intermediate imports per capita) and overall economic development (initial grid mean night lights intensity). We further show that our findings are robust when controlling for a location’s possible exposure to contemporaneous exchange rate movements or VAT adjustments.

By contrast, we find that exposure to China’s retaliatory tariffs had an insignificant effect on grid-level night lights. We present some suggestive evidence for why this was the case. China’s reductions to its Most Favored Nation (MFN) tariff rates offset some of the bite of the retaliatory tariffs. Chinese importers also appear to have turned to alternative country sources for their inputs. Last but not least, there is the possibility that Chinese firms substituted toward domestic inputs, although we lack direct data to verify this.

As a second step in our analysis, we map the above impact on night lights intensity to more conventional economic outcomes, specifically GDP per capita and manufacturing employment. To do so, we follow the statistical model in Henderson et al. (2012): we estimate the required structural elasticity that maps changes in night lights to changes in GDP per capita (respectively, manufacturing employment), using prefecture-level data from the Chinese City Statistical Yearbook from 2012–2016. With these elasticities, we can then compute the inferred changes in the respective economic outcomes that match the changes in night lights intensity induced by the US tariff shocks.

Figure 2 summarizes this inferred impact of the US tariffs across grid locations. The grid cells are first ordered in terms of the severity of exposure to the US tariffs and grouped into population-weighted percentile bins. We find that the negative impact of the US tariffs was highly skewed across locations. Up to 70% of China’s population experienced zero or minimal direct exposure to the US tariffs. On the other hand, the tail 2.5% of China’s population that was most directly exposed saw a 9.1 percentage point US tariff shock; this translates to a 2.52% contraction in GDP per capita and a 1.62% reduction in manufacturing employment relative to unaffected grids. The grid cells in this most tariff-exposed bin were not clustered solely in coastal regions; instead, these cells could be found in close to two-thirds of China’s prefectures. 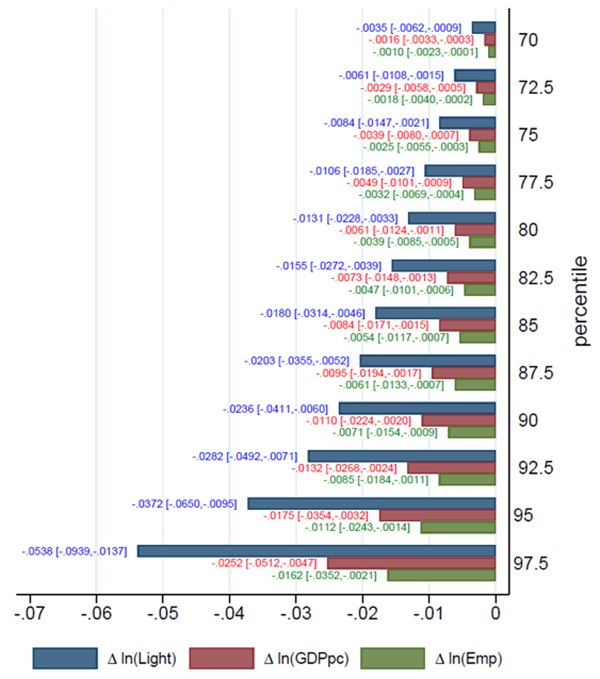 In sum, our findings confirm that the tariffs enacted by the United States on exports from China had a negative impact on economic performance in the short run. Several open questions with policy implications remain: To what extent will the continued application of these tariffs complicate and slow the recovery of China’s economy from the COVID-19 pandemic? What are the longer-term consequences of these tariffs, as their impact on firms’ investment decisions play out more fully?

Note 2: Several existing studies on the tariffs’ impact on China have similarly turned to the use of novel data sources: He et al. (2021) examine data on online vacancy listings, while Cui and Li (2021) look at records of new company registrations.

Note 3: See Donaldson and Storeygard (2016) for a survey on the use of satellite-based data in economics research.

Note 5: This is in line with the marked decline in China’s exports to the United States following the onset of the tariffs, as reported, for example, in Fagjelbaum et al. (2020). This decline in export volume can be reconciled with a near-complete pass-through of the tariffs onto the United States if China’s export supply curve was very flat and the US import demand curve was not fully vertical. The elasticities that Fagjelbaum et al. (2020) estimate are indeed consistent with such a scenario.

Chor, Davin, and Bingjing Li. 2021. “Illuminating the Effects of the US-China Tariff War on China’s Economy.” NBER Working Paper No. 29349.

Donaldson, Dave, and Adam Storeygard. 2016. “The View from Above: Applications of Satellite Data in Economics.” Journal of Economic Perspectives, 30(4): 171–198.

Flaaen, Aaron, and Justin Pierce. 2019. “Disentangling the Effects of the 2018–2019 Tariffs on a Globally Connected U.S. Manufacturing Sector.” Working Paper.