We develop measures for technology decoupling and dependence between the U.S. and China based on combined patent data. The first two decades of the century witnessed a steady increase in technology integration (or less decoupling), but China’s dependence on the U.S. increased (decreased) during the first (second) decade. Decoupling in a technology field predicts China’s growing dependence on U.S. technology, which, in turn, predicts less decoupling further down the road. Decoupling is associated with more patent outputs in China, but lower firm productivity and valuation. China’s innovation-oriented industrial policies trade off the inherent conflict between indigenous innovation and firm competitiveness. 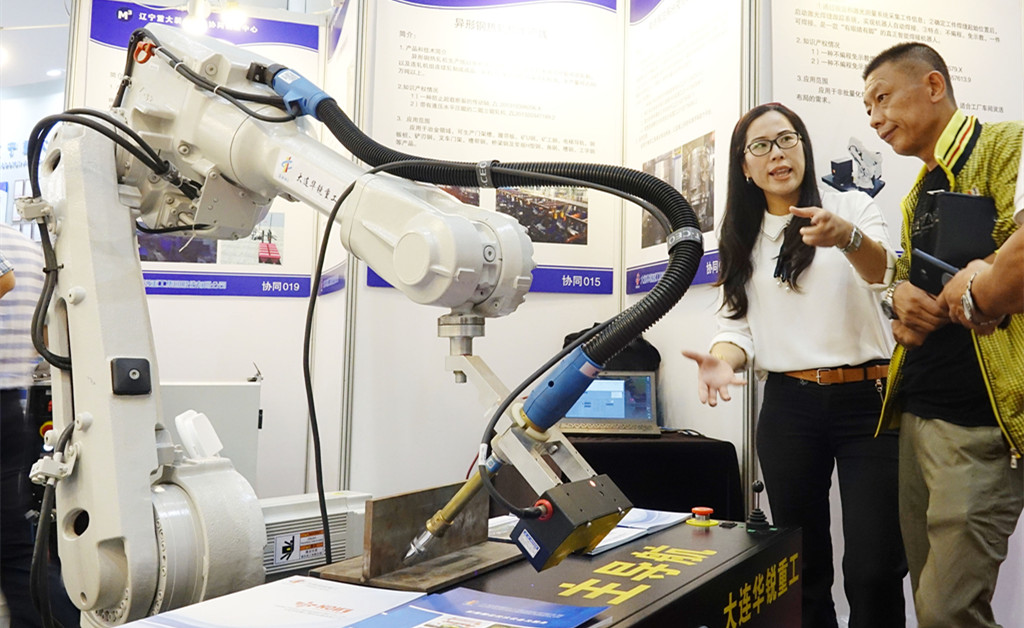 China’s meteoric rise as an economic and technological power benefited from its integration with the developed world, especially the U.S., in the past few decades. The last few years, however, have seen a rise in mutual distrust and actions to unwind the current level of technological interdependence. The process toward two ecosystems with an increasing degree of separation is now widely known as “decoupling.” While there have been fierce debates among scholars and policymakers about the levels and consequences of decoupling, there has not been a pointed academic study mapping the current state and dynamics of competition and decoupling in technology between the two countries; nor has there been a study characterizing the motives and impact of recent policies that directly or indirectly aim at decoupling. Our study seeks to fill this gap. In particular, ours is the first study to quantify technology decoupling with a novel framework so that we can analyze how decoupling predicts future technology dependence, as well as the operating and innovative performance of firms in both countries.

Combining patent data from the patent offices in both countries, we measure technology decoupling and dependence based on cross-country patent citations, as visualized in Figure 1. The vertical axis (pc,u) is the propensity for Chinese patents to cite U.S. patents relative to citing Chinese ones; the horizontal axis (pu,c) measures the propensity in the reverse order. The state of “complete decoupling,” or an absolute lack of integration, is associated with the origin point, which corresponds to the scenario of mutual non-citation. In the opposite scenario of “complete integration,” graphically, the point I with (1, 1) coordinates, domestic patents cite patents in the other country as often as they cite domestic patents. The 45-degree line in Figure 1 is the state of parity in the sense that citations between U.S. and Chinese patents are evenly reciprocated. When a point deviates from the 45-degree line, the relationship between the two countries becomes asymmetric in the sense that one country depends more on the other. Hence, the deviation from the 45-degree line captures the net relative dependence of one country on the other. Any interior point, for example, P, in Figure 1 represents a unique combination of the extent of decoupling and that of dependence. To illustrate, we first make a projection of P onto the 45-degree parity line, arriving at point Q. The norm (length) of

captures the degree of decoupling; while the norm (length) of

reflects China’s technological dependence on the U.S. Note the decoupling and dependence measures could be correlated. We also conduct robustness analysis where the two measures are orthogonalized so that inferences could be made on their individual impact. 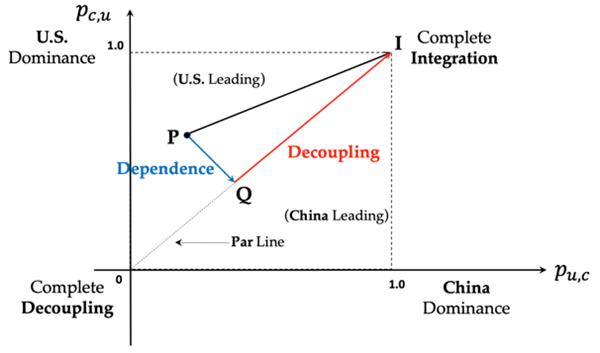 Applying the measures at the aggregate level, we uncover the dynamics of decoupling and dependence in the 21st century, as shown in Figure 2. U.S.-China technology decoupling has been declining steadily since 2000, the year before China acceded to the World Trade Organization. In other words, growing integration of the two technological systems has been the main theme. China’s technological dependence on the U.S., on the other hand, is hump-shaped, having peaked in 2009 at the end of the Great Recession. Therefore, from China’s perspective, 2000–2009 was a decade of dependence-deepening integration with the U.S.; while the next decade featured dependence-mitigating integration. Toward the last two years of our sample (since 2018), we observe signs of increasing decoupling, but the time period is yet too short to offer definitive inferences. 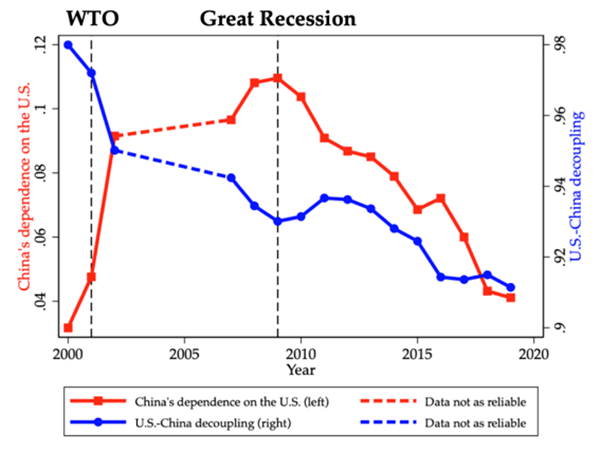 The aggregate states of decoupling and dependence do not do full justice to the rich variation across different technology sectors. In particular, we consider the following ten high-tech fields that are frequently discussed by scholars, policy makers, and commentators: smartphones, semiconductors, software, pharmaceuticals, internal combustion engines, machine learning, neural networks, drones, cloud computing, and self-driving cars. Compared to mature technological fields (e.g., pharmaceutical), China is more decoupled from, and depends less on, the U.S. in emerging technologies (e.g., machine learning). In fact, most high-tech fields have been evolving along more decoupled paths in recent years, while China has also reduced its dependence on the U.S. While the U.S. is still leading in a majority of the technology fields, China has started to take over in a few, notably, in drone technology.

Can China achieve independence via decoupling? The inference from data turns out to be quite nuanced. On the one hand, when China achieves more independence from the U.S. in a certain technology class, the temptation is strong to decouple in the near future (i.e., in the coming year). On the other hand, once more decoupled, China then ends up being more dependent on U.S. technology in the intermediate term (i.e., two years down the road). Such a feedback loop is informative: Overall China has not been able to continue to gain technology independence for an extended period of time without engaging with U.S. technology.

When it comes to the relation between decoupling and firm performance, our prior is ambiguated by two opposing forces. Global technology integration facilitates knowledge spillover, which complements and spurs domestic innovation (a “complementarity effect”). At the same time, technology decoupling forces domestic firms to create instead of merely to follow; and decoupling may further provide a sheltered space for them to do so. Both factors provide stronger incentives for domestically oriented innovation (a “substitution effect”). Our empirical analyses indicate that heightened U.S.-China technology decoupling is followed by higher patenting output by Chinese firms, suggesting that the substitution effect dominates. However, firm efficiency and valuation suffer in China, manifesting a cost for “reinventing the wheel” in a decoupling world. In contrast, the impact of decoupling on U.S. firms has been much less pronounced, presumably because the U.S. is still in the leading position in most fields.

Given the asymmetric effects of decoupling on firms in China and the U.S., we explore the motives and consequences of policies that aim at technology integration or decoupling from both governments. On the China side, the “strategic emerging industries” (SEI) initiative remains the most salient technology-motivated industrial policy to date and has invited different narratives from the two sides. According to both the Obama and Trump administrations, the major goal of China’s innovation-promoting industrial policies was to achieve “self-sufficiency” by “domestic substitution of foreign technologies.” The Chinese government, however, qualified its policies as an attempt to achieve self-sufficiency without deviating from the global technical standards or advancing along a different technological trajectory. Data lends more support to SEI being associated with more technology integration instead of decoupling, and with growing independence of China from the U.S., among the technology sectors targeted by the policy. SEI promotion and government subsidies are associated with lower patenting activities by, but higher productivity and market valuation of, recipient firms. In other words, firms that are beneficiaries of the SEI policies have successfully converted government support to enhanced operating efficiency and return for investors, but not to original technology development. The combined results reveal an inherent trade-off between fostering “indigenous innovation” in China and enhancing firm efficiency.

Regarding policies on the U.S. side, we evaluate the impact of U.S. sanctions imposed via the entity list of the U.S. Department of Commerce, which had hovered at a low level but have escalated since 2014 (during the second term of the Obama administration). Perhaps contrary to conventional wisdom, we find that U.S. sanctions against China, as of 2019, have not been followed by decoupling in the targeted technology area, supporting the long-standing saying that science and technology do not respect national boundaries. The U.S. government interventions, short of more draconian measures, have not been strong enough to reverse the fundamental forces driving global integration in recent decades. The “escalation period” of U.S. sanctions has prompted China to pursue more independence-oriented technological development. While incurring moderate drops in patenting output and firm efficiency, Chinese firms in the sanctioned sectors did not suffer in valuation during the period, presumably because of the sterilizing measures by the Chinese government since 2014, making symbols of national resilience out of the sanctions entities.