Do Multinationals Transfer Culture? Evidence on Female Employment in China

In our recent paper (Tang and Zhang  2021), we investigate the global diffusion of culture through multinationals. We study specifically how foreign affiliates serve as a vehicle to diffuse gender norms from their countries of origin to China. Based on Chinese manufacturing firm-level data, we find that foreign affiliates in China tend to employ proportionally more female workers than local Chinese firms within the same industry, especially if their countries of origin have a more gender-equal culture. In addition, we find evidence of cultural spillovers from these Chinese subsidiaries to Chinese domestic firms. We further build a theoretical model and quantify the effects of gender discrimination and cultural spillover on the aggregate productivity. 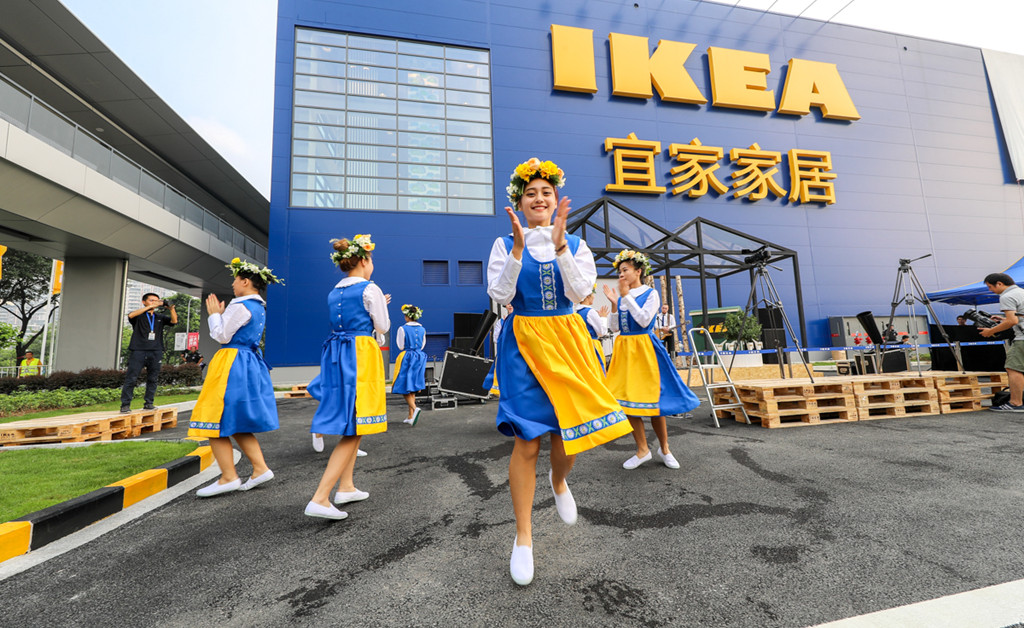 Social scientists on have long debated how multinationals can shape host countries’ social norms and values, and thus contribute to potential global cultural convergence. They argue that multinational firms don’t just bring capital and technology to the host countries; they also serve as an important vehicle for the dissemination of norms and values. However, economics research on the cultural effect of foreign direct investment (FDI) is limited, partly because of the challenges in measuring culture, let alone identifying the dissemination. As a result, existing economics research on FDI focuses almost exclusively on knowledge and technology spillovers (e.g., Aitken and Harrison 1999, Javorcik 2004).

In our recent paper (Tang and Zhang 2021), we attempt to fill this void in the literature by studying whether and how FDI can transfer culture from a multinational’s home country and shape social norms in its host country. We focus on gender norms, since it is possible to measure revealed gender culture with country-level and firm-level data.

Studying China’s gender inequality is of interest, first because of the country’s deep cultural links to Confucianism, which strongly advocates women’s obligatory role. Second, income and gender inequalities have increased rapidly in China since its government implemented market reforms in the late 1970s (Cai, Park, and Zhao 2008).

The Diffusion of Gender Culture through Foreign Affiliates

The primary data for our analysis are obtained from the annual industrial firm surveys of China. For each firm, we have information on employment by gender. We can also infer the probability that a company’s manager is a woman based on the company’s legal person representative’s first name. Figure 1 plots the density of female labor share for both domestic and foreign-invested firms in 2004. On average, foreign firms tend to hire more women than Chinese domestic firms. To measure a country's gender culture, we use its gender inequality index (GII), published by the United Nations Development Programme in 2011. A higher GII value indicates higher gender inequality.

Our firm-level regressions based on Chinese manufacturing survey data from 2004 to 2007 suggest that foreign affiliates from countries with a more gender-equal culture tend to employ proportionally more women and are more likely to appoint female managers. A one standard deviation decrease in the GII of the country of origin (equivalent to reducing Malaysia’s gender inequality to that of Germany, based on GII) is associated with an average increase of 1.9 percentage points in female employment share in its affiliates within industries and provinces. These results remain robust when we control for various firm characteristics, including measures of workers’ skill level and technology. 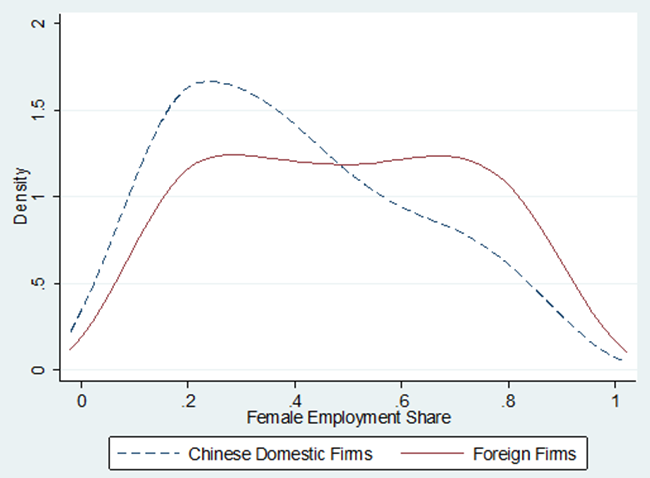 Perhaps more surprisingly, multinational firms appear to influence Chinese domestic firms’ attitudes toward female workers, as we find that domestic firms’ female labor shares and likelihood of employing female managers both increase with the prevalence of multinational firms in the same industry or city (Figure 1). This correlation is robust to the control of the intensity of competition, and does not appear to be caused by foreign firms’ sorting into regions with lower female wages. In particular, after controlling for firm fixed effects and the determinants of firms’ female employment based on existing studies, we find that a one standard deviation increase in the output share of multinationals in the same city (industry) is associated with an average increase of 1.7 (0.7) percentage points in the female employment share in domestic firms. These cultural spillovers from multinationals are greater if the FDI source is from a more gender-equal country, suggesting that these changes in the female employment share in domestic firms are not driven solely by changing economic conditions in the labor or goods markets.

We build a multisector task-based model to incorporate firms’ taste-based discrimination, à la Becker (1957). We model cultural spillovers as a process through which domestic firms update their (biased) beliefs about the cost of female workers in the direction of the objective benchmark. A domestic firm updates its prior belief when its belief differs from the average belief among the foreign firms it interacts with. The extent of belief updating is greater when the firm interacts with more foreign firms.

Based on the model, we quantify the aggregate productivity loss due to gender discrimination and the gain associated with the cultural effect of FDI, using the average revenue product (ARP) approach proposed by Hsieh and Klenow (2009). After fully eliminating gender discrimination by setting the female-to-male labor ratios of all firms to the corresponding U.S. benchmark in the corresponding industry, we find that China’s aggregate manufacturing total factor productivity (TFP) increases by about 5%, compared with a 33% TFP gain when removing all capital distortions. The cultural effect of FDI is also estimated to reduce the dispersion of firms’ female-to-male employment ratios within industries, and thus to contribute around 1% of the increase in China’s aggregate manufacturing TFP.

In sum, we show how economic globalization can change long-standing, country-specific prejudices against women. Many developing countries have recently made important progress toward gender equality and women’s empowerment. Those policies aimed at attracting FDI may have an unexpected effect on gender inequality due to the dissemination of culture by multinational firms.

Becker, Gary. 1957. The Economics of Discrimination. University of Chicago Press.