Twenty years ago, China’s entering the World Trade Organization (WTO) was a catalyst for its economic development and propelled China into becoming one of the most important economies in the world. But massive import tariff reductions allowed more import competition, which raised concerns that innovation would be curbed. Tuan Luong, from De Montfort University, and his co-authors, Qing Liu, Ruosi Lu, and Yi Lu, discuss the impacts of import competition on domestic innovation. We find that while import competition reduced innovation in China in general, the impact was differential across different types of innovation. 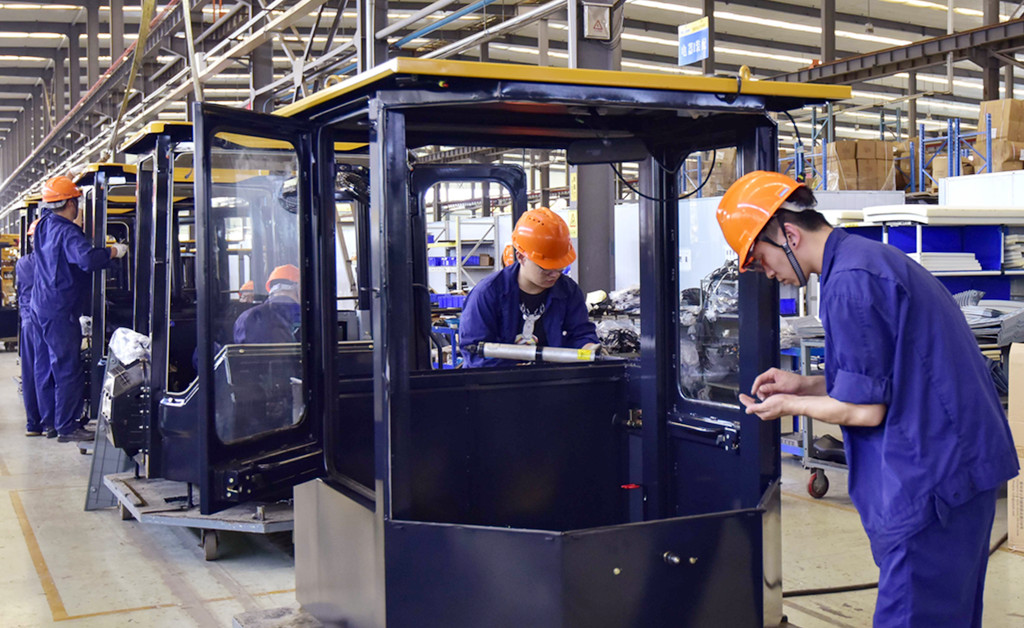 As a requirement for membership in the WTO, China carried out large-scale tariff reductions between 1992 and 1997. Specifically, in 1992, China's (unweighted) average tariff was as high as 42.9%. Shortly after the GATT Uruguay Round negotiations, China substantially reduced its tariffs; the average tariff dropped from 35% in 1994 to around 17% in 1997. Tariffs remained stable after 1997 until China joined the WTO at the end of 2001. At the beginning of 2002, China started to fulfil its tariff reduction responsibilities as a WTO member country. According to the WTO accession agreement, China would largely complete the tariff reduction by 2004, and with a few exceptions, fully complete it by 2010,at which time the average tariffs on agricultural and manufacturing goods would be reduced to 15% and 8.9%, respectively (see Figure 1). 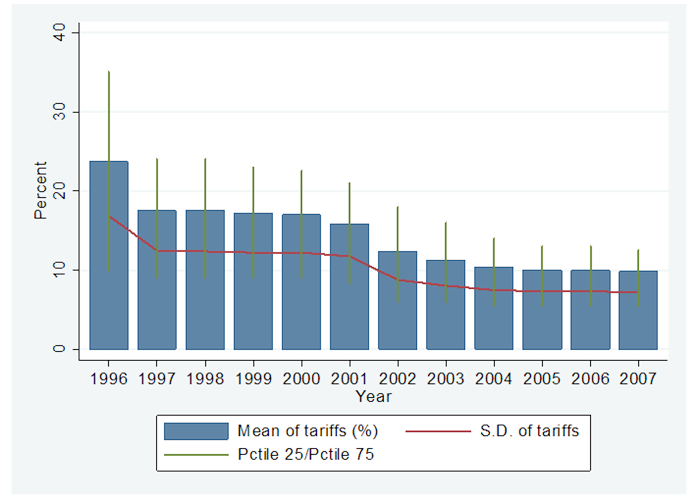 There is naturally a concern that trade liberalization will have adverse effects on domestic firms. Free trade opponents often argue that import competition will limit the rents from innovation (Schumpeter, 1942). However, there is the counterargument that innovation would allow the firms to escape competition (Aghion et al., 2005). There are at least two more theories that can be used to rationalize the impacts of import competition on innovation. The first one is the preference theory. According to this theory, import competition threatens the existence of the business. Hence, it prompts the agents responsible for innovation to invest more. The second theory, developed by Bloom et al. (2013), argues that import competition reduces the opportunity costs of the trapped factors that are necessary for innovation activities.

In our paper, we study how import competition influenced innovation on Chinese firms. To achieve this aim, we exploit the fact that industries more protected pre-WTO accession experienced more tariff reductions and hence, faced more import competition (see Figure 2). By matching the Annual Survey of Industrial Firms, the patent filing data obtained from the State Intellectual Property Office of China (SIPO), and the Chinese tariff data from the WTO, we investigate whether the arrival of imported goods reduced innovation in China. The difference in tariff reduction across industries mentioned above allows us to conduct a difference-in-difference (DD) analysis. More specifically, we compare the change of innovative activities in previously more-protected industries (the treatment group) before and after 2001 with the corresponding change in previously more-open industries (the control group) during the same period. Figures 3 and 4 show that there is no systematic difference between the industries before the year 2001, which lays the groundwork for our DD analysis. 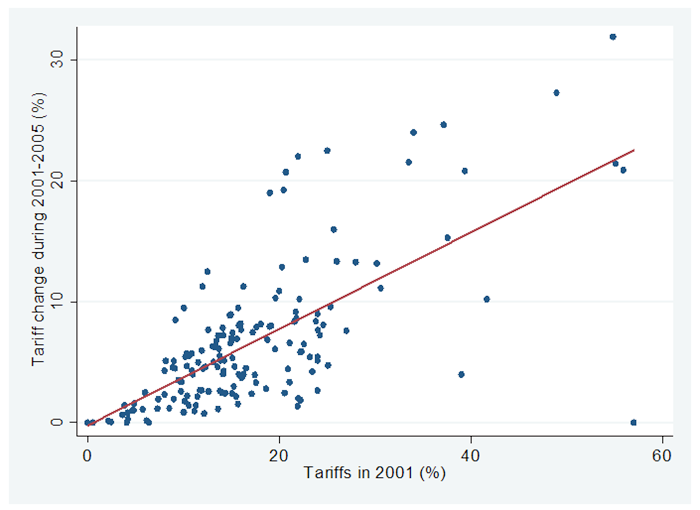 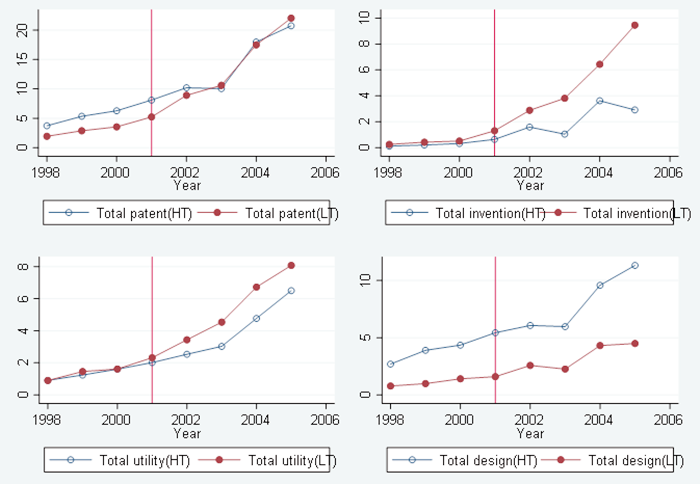 Figure 4: Time Trends of Innovation for High- and Low-Tariff Industries: Average Number of Patents Per Firm 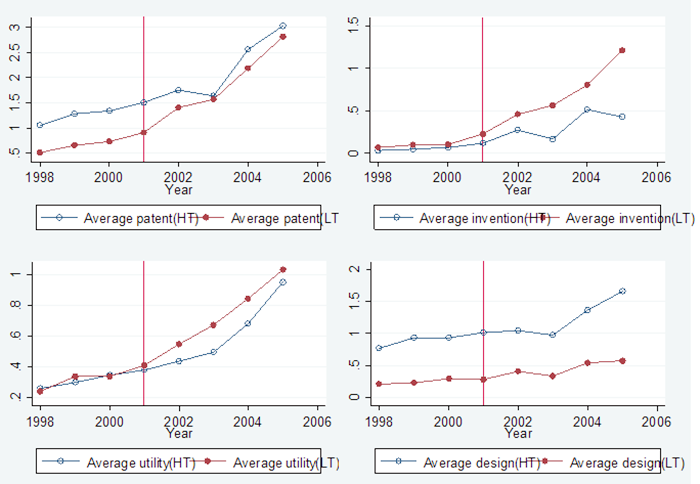 Does import competition reduce firms’ innovation in China? Overall, the answer is positive. We find that firms in industries with higher tariffs in 2001 (the treatment group) innovated less post-WTO accession than firms in industries with lower tariffs in 2001 (the control group) (see Table 1). More interestingly, when we take a closer look, we see differential impacts. Bombardini et al. (2018) show that import competition increased the probability of innovation among the most productive firms in China. We find that import competition reduced the number of invention patents and to some extent, the number of utility patents. However, it raised the number of design patents (see Table 2). Our findings provide evidence to support the preference and spillover theories but they do not support the escape-competition or the trapped-factor models. 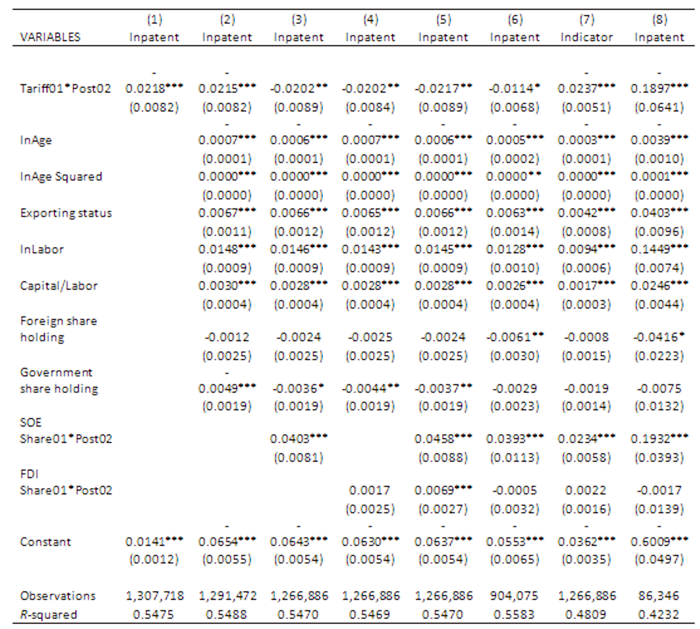 Note: Robust standard errors in parentheses. The tariffs used in column 6 are weighted average tariffs. The Indicator in column 7 takes value 1 if the firm files any patent application in that year, 0 otherwise. In column 8, we use the subsample of firms that ever filed for a patent. *** p<0.01, ** p<0.05, * p<0.1 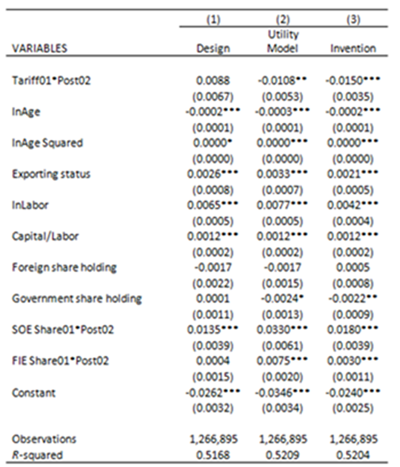