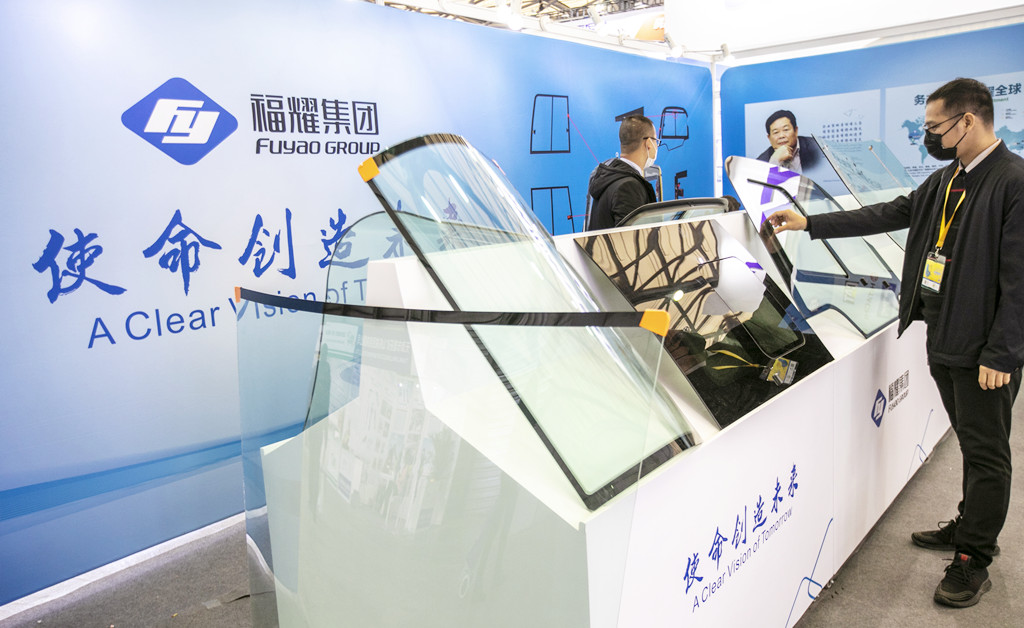 Since China joined the World Trade Organization (WTO) in 2001, its share of global trade has surged from less than 1% to nearly 15%. Moreover, recent years have witnessed a remarkable rise of Chinese multinational firms (see Note 1). As shown in Figure 1, the number of listed firms almost quadrupled from 2000 to 2019. Among the newly listed firms, the proportion of multinational firms increased from zero to around 60% of all firms, and foreign sales persistently account for around 22% of the multinationals’ total sales.

Figure 1: Growth of Multinational Firms and Foreign Sales in China 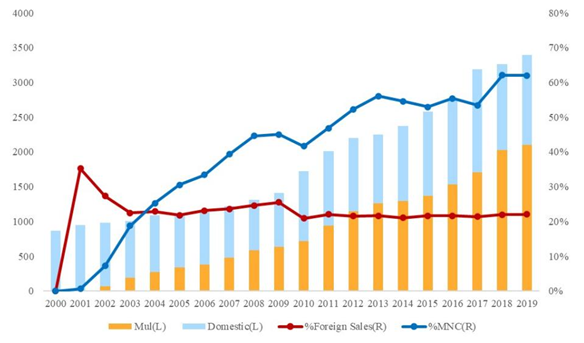 Since 2016, China has witnessed a dramatic swing from net capital inflows to large net outflows, which attracts widespread concern about the stability of China’s capital markets. The debate focuses on the underlying factors that drive the capital exodus (see Note 2). In a dynamic stochastic general equilibrium (DSGE) framework, Tille and Wincoop (2010) argue that the endogenous time variation in expected returns and risks is the key determinant of portfolio choice between home and foreign capital. To the extent that  domestic and foreign capital are affected differently, the time-varying risks are an important driving force behind international capital flows. Motivated by the theoretical notion, we empirically evaluate a series of return and risk factors that may shape Chinese multinational firms’ investment allocations between the domestic and foreign markets.

We employ a sample of 3,863 Chinese nonfinancial firms listed on the Shanghai and Shenzhen Stock Exchange in 2000–2019. We investigate whether the firms listed in the Chinese mainland would utilize the offshore markets to transfer their capital overseas, especially when the domestic market features high uncertainty. A firms is considered to be multinational if its foreign sales take up at least 5% of its total sales. In our sample, the multinational firms are mainly in manufacturing, information technology, and mining industries. The United States is the most popular nation for multinational firms to locate their subsidiaries (879 firms). Subsidiaries of 469 firms are in tax havens  such as the British Virgin Islands (310 firms) and the Cayman Islands (159 firms).

We find that a one standard deviation increase in a firm’s foreign sales ratio is associated with a 5.3% increase in its capital expenditures. The relations are likely to be causal when we use China’s accession to WTO as an experiment in a DID framework. We also use three alternative instrumental variables for robustness checks.

We illustrate the main ideas above in Figure 2. During the periods of China’s leadership transition, the reform of state-owned enterprises (SOEs), the renminbi’s access to special drawing rights (SDR), and the US–China trade war, there were significant spikes in multinational firms’ offshore investments, but such spikes did not exist among the firms without foreign sales. These results suggest that the Chinese multinationals increase offshore investment possibly to avoid policy uncertainty in the Chinese mainland. 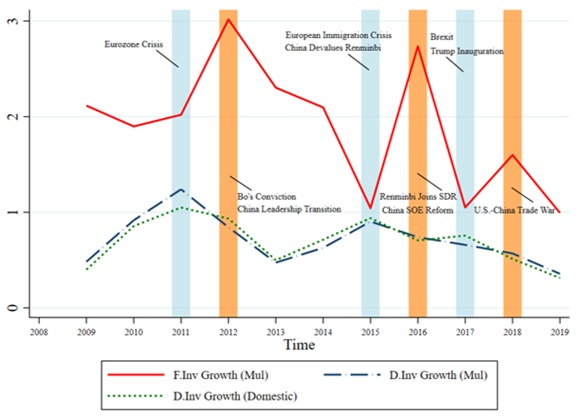 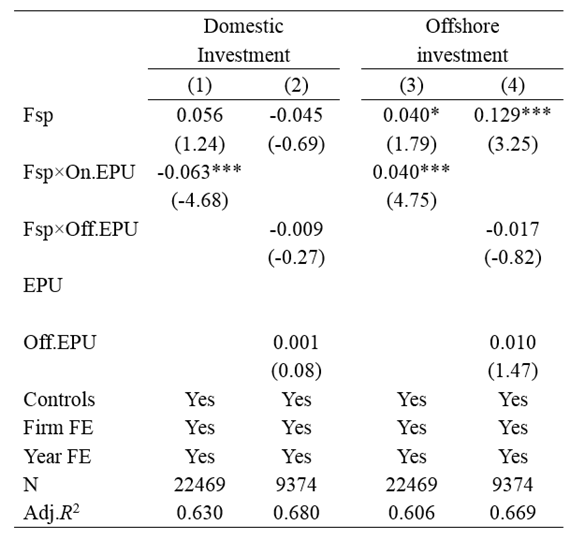 The table presents the estimates of the impact of economic policy uncertainty on the relationship between foreign business exposures and firms’ investment policies. Fsp. is the ratio of a firm’s foreign sales scaled by total sales. The measure of economic policy uncertainty is from Baker et al. (2016). We separately measure firms’ exposure to the EPU on the domestic market (On.EPU) and on the offshore markets (Off.EPU). All regressions include firm and year fixed effects. Standard errors are corrected at the industry level, and associated t-statistics are in parentheses. *, **, and *** indicate statistical significance at the 10%, 5%, and 1% level, respectively.

This paper is most related to the emerging literature on the internal capital markets of multinational firms (Pinkowtiz, Stulz and Williamson 2012; Dinc and Erel 2013; Fernandes and Gonenc 2016). Recent studies show that financial shocks can be internationally transmitted through a firm’s subsidiaries. For instance, Bena, Dinc and Erel (2020) find multinational firms propagate economic declines from subsidiaries in countries with economic downturns to the investment declines of subsidiaries not experiencing a downturn. Wu and Ye (2021) show that global financial uncertainty has a contractionary effect on the real investment for foreign-invested enterprises in China. In this paper, we evaluate the international transmission of policy uncertainty via multinational firms’ subsidiary networks.

This paper adds to the literature on the determinants of cross-border capital flows. Despite extensive theoretical models and macro-level evidence on the functions of capital flows across countries, micro-level evidence on firms’ cross-country capital allocation has been relatively scarce. (Branson and Henderson 1985; Obstfeld 2004; Gourinchas and Jeanne 2006; Tille and Wincoop 2010). Our paper shows that Chinese multinational firms allocate offshore investment mainly to avoid domestic uncertainty.

Taken together, our analysis provides evidence on Chinese multinational firms’ investment allocations across domestic and offshore markets. Specifically, the results in this study show the importance of a clear, stable, and transparent policy environment for avoiding capital outflows and boosting private investment in the domestic market.