The Natural Interest Rate in China 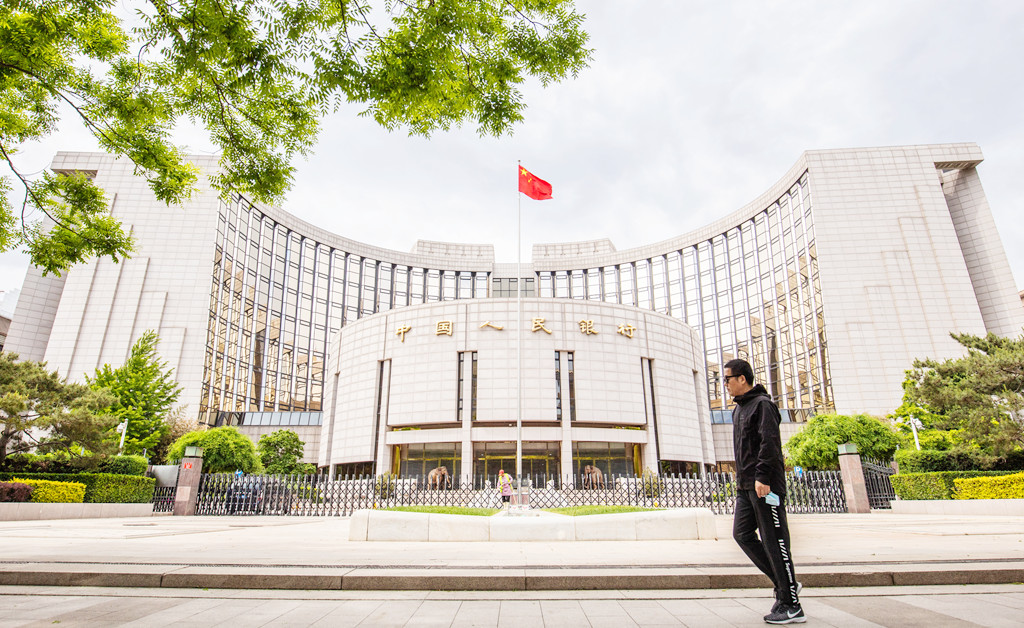 Over the past few decades, China’s economy has experienced an extraordinary transformation. As the economy has grown and financial markets have developed, the conduct of monetary policy has evolved from a quantity-based framework based on controls of monetary and credit aggregates to a market-based system where short- and medium-term policy interest rates increasingly serve as the main policy instruments. This has created a need for tools to evaluate the stance of monetary policy in China. In Sun and Rees (2021), we contribute to this effort by providing estimates of China’s natural interest rate.

Tailoring the approach to Chinese conditions

There are a number of challenges when applying the Laubach and Williams framework to Chinese data. Chinese GDP growth varies little from quarter to quarter (see Note 1), and some key variables have relatively short data samples. For example, the one-year loan prime rate (LPR), a core policy instrument, did not exist until late 2013. Short samples and uninformative data make it hard to pin down variables such as the output gap, potential output growth, or expected inflation. Without these, estimates of the natural interest rate lack credibility.

We overcome these challenges by making use of multiple data sources. For example, we use data on GDP, import values, railway traffic, and electricity volumes to measure economic activity, and we use both the consumer and producer price indexes to measure underlying inflation. Individually, each of these measures has drawbacks, but together, they shed considerable light on the Chinese business cycle and trends in the rates of economic growth and inflation.

Our main result is that China’s natural interest rate averaged around 3–5 per cent between 1995 and 2010, but has declined more recently to be about 2 per cent as of the end of 2019 (Graph 1, left-hand panel). A bit over half of the decline in the natural interest rate was due to a reduction in potential output growth (right-hand panel). The rest reflects other factors, such as demographic changes, financial market development, or shifts in saving preferences as incomes have risen. Assuming an annual inflation rate of 2–3 per cent, which is consistent with recent inflation outcomes and the inflation objective laid down by the National People’s Congress, our estimates imply a natural nominal interest rate of around 4–5 per cent. 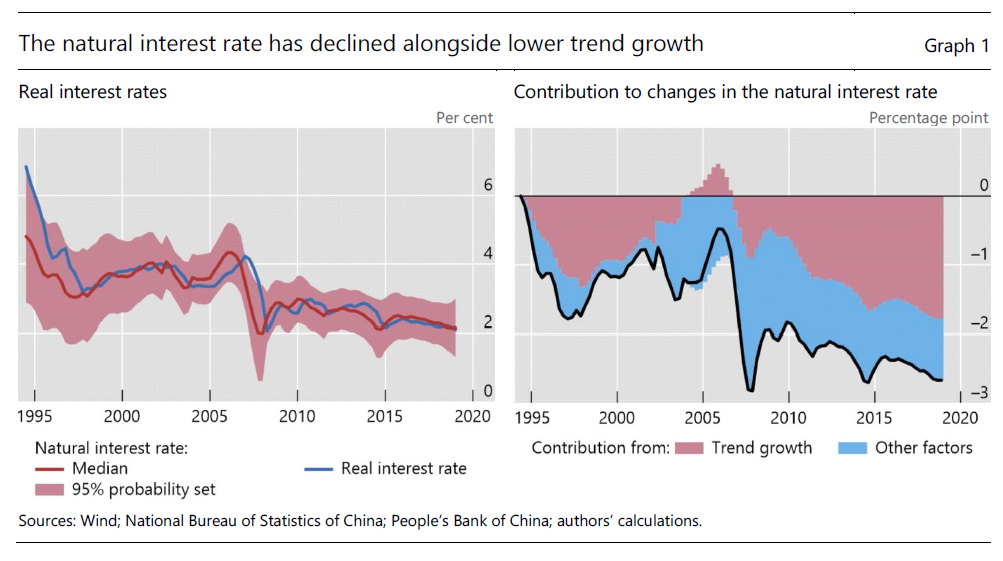 Besides the natural interest rate, we also estimate the output gap in China (Graph 2, left-hand panel). For the most part, our estimates correspond to standard accounts of Chinese economic developments. After experiencing a cyclical downturn in the late 1990s, economic activity in China picked up through the mid-to-late 2000s, likely supported by China’s entry to the WTO in 2001. Economic activity declined sharply during the Great Financial Crisis (GFC), with the output gap reaching –1%, although the downturn was extremely brief. Between 2012 and 2019, the output gap was close to zero, except for a small dip around 2015.

Consistent with the relatively small output gap, we estimate that actual GDP growth has tracked potential growth closely in recent decades (Graph 2, right-hand panel). Potential growth accelerated from around 7 per cent in the late 1990s to reach 12 per cent in 2006. Since then, it has gradually declined, and at the end of 2019 was around 6 per cent. 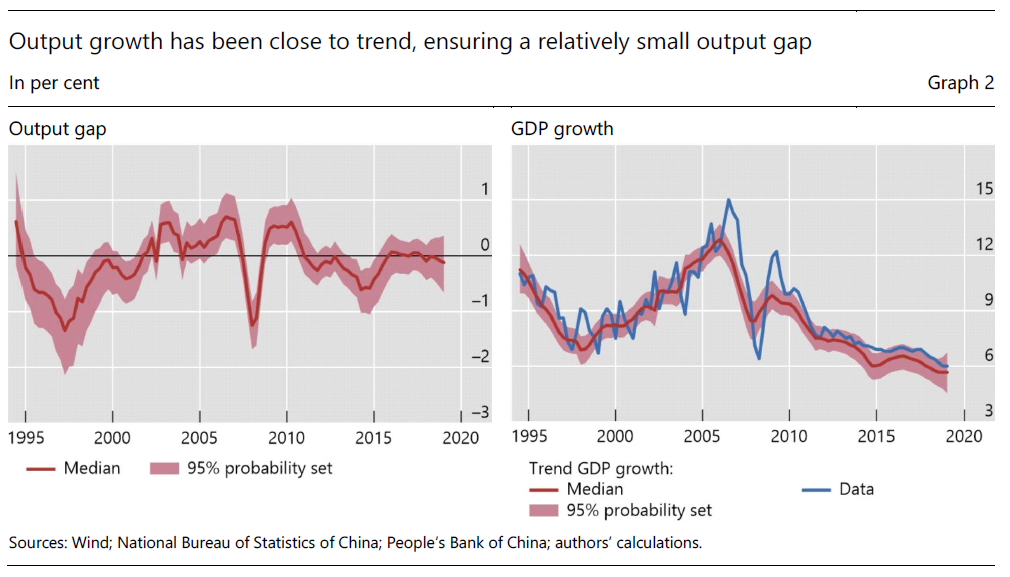 Because monetary policy affects the economy with a lag, natural interest rate estimates can be revised as new data become available. The results described above use information from the entire sample to estimate the natural rate. As such, they may overstate the predictability of the natural rate and understate the uncertainty around its level in real time. We can get a sense of this uncertainty by comparing these “full-sample” estimates of the natural rate to “real-time estimates” that use only past and current information to estimate the value of natural rate at each point in time (Graph 3, left-hand panel) (see Note 2).

Our model provides a good guide to China’s natural interest rate in real time. As one would expect, the real-time estimates lag the full-sample ones by a few quarters. For example, based on the full data sample, we estimate that China’s natural interest rate fell by a bit over a percentage point in 2008. But, with the information available at the time, this decline would not have been apparent until late 2009. On the whole, however, the pattern of the two series is similar. This is also the case for the model’s other key state variables, like the output gap, trend inflation, and potential GDP growth.

The real-time estimates also shed light on the stance of monetary policy. Policymakers do not have the benefit of hindsight and must work with the information they have at hand. Consequently, real-time estimates arguably provide a better indication of the stance that policymakers were trying to achieve at any point in time. Indeed, when measured against the “real-time” estimates, we find that the ex-post real interest rate has tracked the natural interest rate closely, even though, based on the full sample, our results suggest that real interest rates have deviated from the natural rate from time-to-time (Graph 3, right-hand panel). 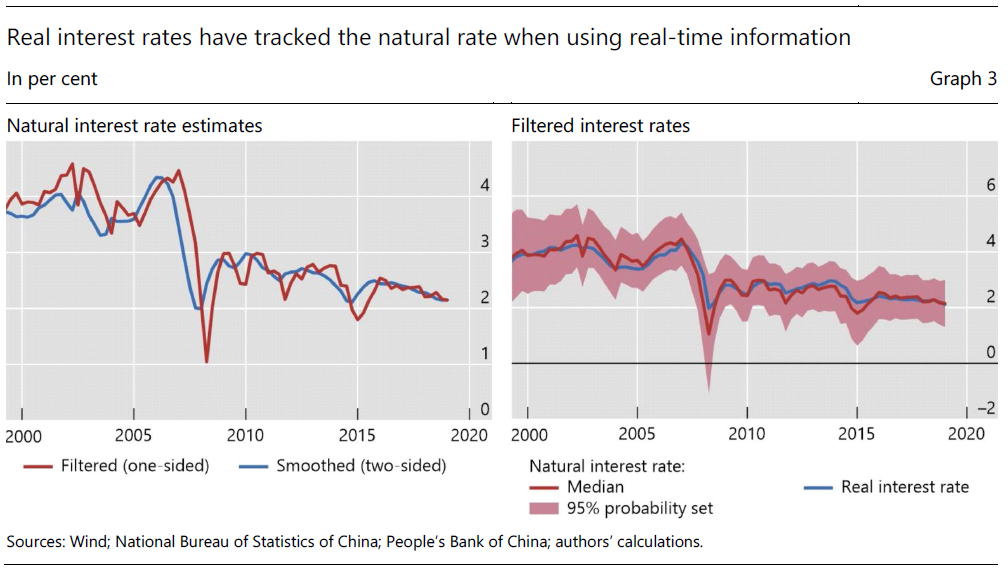 As the Chinese financial system evolves and its links with overseas economies intensify, interest rate developments in China will assume increasing importance for macroeconomic conditions in China and globally. This creates a need for tools that can shed light on the stance of monetary policy in China, its links to cyclical developments and its medium-term anchors. The model described in this note helps to address this need by proposing a framework to estimate the natural rate of interest in China as well as related concepts such as the output gap.

(Daniel M. Rees is a Principal Economist at the Bank for International Settlements; Sun Guofeng is Director General of the Monetary Policy Department of the People’s Bank of China.)