Official unemployment rate in China is based on registered unemployment figures, but the official figures are likely underestimates of the true unemployment rates because many unemployed people are not qualified to register with government agencies and even those who are qualified may choose not to for various reasons. Shuaizhang Feng of Jinan University, and Yingyao Hu and Robert Moffitt, both of Johns Hopkins University, discuss their new effort to provide the first comprehensive picture of China’s labor market for the period 1988-2009 using Urban Household Survey (UHS) data administered by the National Bureau of Statistics of China.

According to the official figures, China’s unemployment rate has been very low compared to other countries at similar stages of economic development and suspiciously stable over time (see dashed line in Figure 1). This is perhaps not surprising — the official unemployment rate in China is based on registered unemployment figures. Many unemployed people are not qualified to register with government agencies and even those who are qualified may choose not to for various reasons, the most important one being the very low levels of unemployment benefits.

Various previous studies have tried to make better estimates, and have usually ended up with numbers significantly higher than the official ones. In most cases those studies simply add laid-off workers to the registered unemployed to derive a total unemployment figure. This method is unsatisfactory as many officially laid-off or registered unemployed workers may actually be working part- or full-time or may be out of the labor force, and the underlying administrative labor statistics are also unreliable. Some studies use micro-level data, but typically such data have been available for only selected regions and for only a few years, as in Giles et al. (2005) and Liu (2012).

Our recent study (Feng, Hu, and Moffitt, 2017) provides the first comprehensive picture of China’s labor market for the period 1988-2009. We use Urban Household Survey (UHS) data administered by the National Bureau of Statistics of China. The UHS sample is representative of all registered urban residents—  the "Hukou" population, which we further adjust using weights derived from the decennial Census data. The UHS records fifteen categories for “employment status” for each individual, allowing us to classify one's labor force status into either employed, unemployed, or not-in-labor-force. These categorizations are consistent over time, and largely concur with the International Labor Organization (ILO) definitions adopted in 1982 for internationally consistent unemployment rate comparisons. 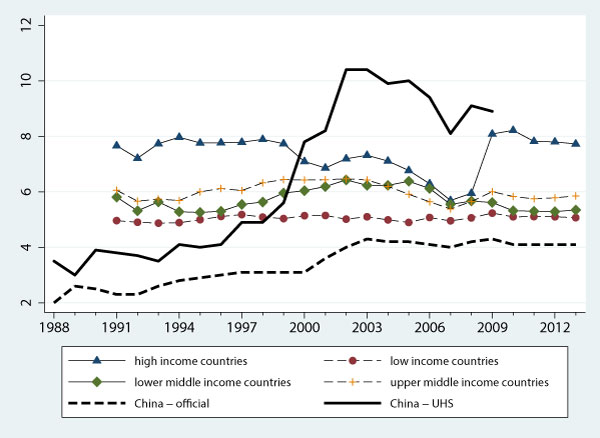 We break the 1988-2009 period into three sub-periods based on the stages of China's labor market development: the state-owned enterprises (SOE) period (1988-1995), the labor market reform period (1995-2002) and the post-reform period (2002-2009). According to our calculations, in the first period, the average estimate of the unemployment rate was only 3.7%, while the official average was 2.5%. During this time period, the urban labor market was still characterized by the so-called “iron rice bowl,” with state-assigned jobs and lifetime employment, mainly in the state sector. However, in 1995–2002, the UHS-based unemployment rate jumped to an average of 6.2%, far above the official estimate, and climbed rapidly during the period, gaining almost one percentage point each year. The dramatic rise in unemployment coincided with a period of mass layoffs from SOEs and acceleration in rural-to-urban migration.

The rising trend of unemployment stopped in approximately 2002, partly as a result of China’s entry in the World Trade Organization, which increased the demand for labor, and partly as a result of a major expansion of college enrollment, which improved the overall quality of labor. Nevertheless, the unemployment rate seems to have reached a new equilibrium level far higher than what the official figures suggest. In the 2002–2009 period, the UHS-based unemployment rate averaged 9.5%. The official rate lagged far behind at an average of only 4.2%, or less than half of the UHS-based rate.

Labor force participation rate has been declining since the late 1980s

What if we include all urban residents?

UHS only covers urban residents with local Hukou, but residents without Hukou, e.g., urban migrants, are increasingly important in China’s labor markets. Using the decennial Census data and extrapolating to other off-Census years, we show in Panel A of Figure 3 that the migrant population has been the main source of increase for all urban residents and has surpassed the local-urban-Hukou population in number since around 2004. To consider migrants who reside in cities but do not hold local urban Hukou, we have to go beyond UHS data and use supplemental information from the decennial Census. 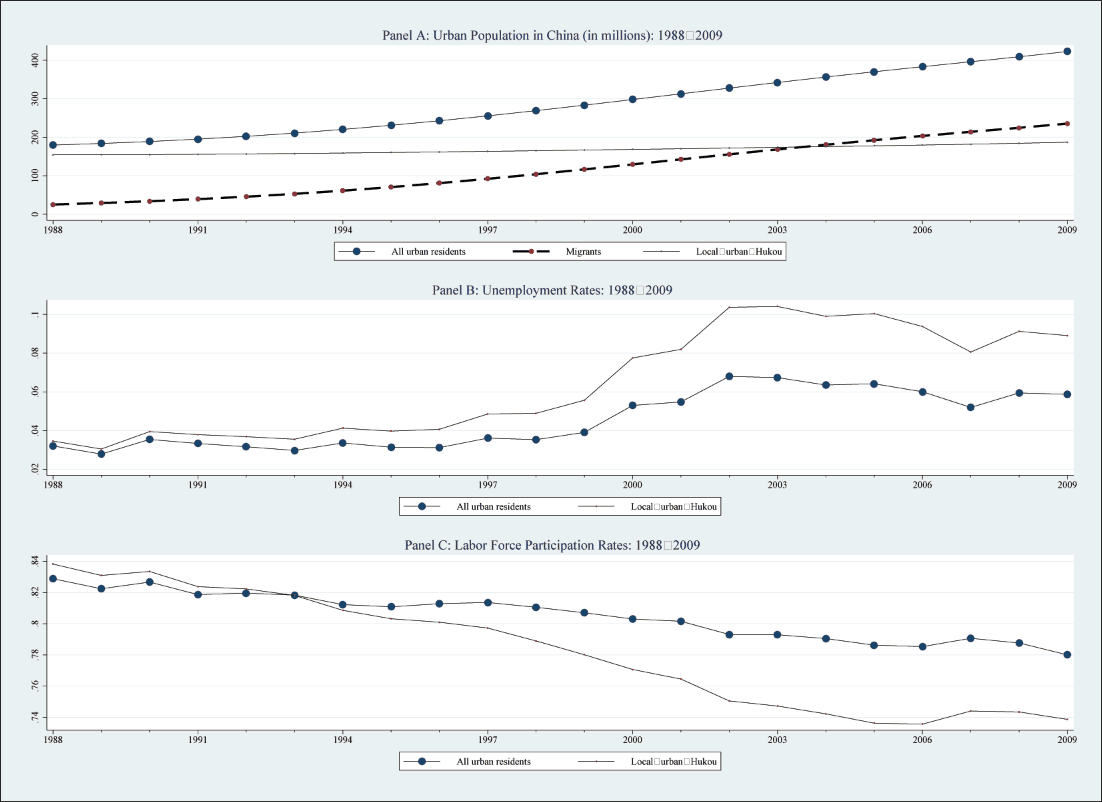 Because no reliable labor force data consistently exist for migrants over the years that we are interested in, we make estimates based on information from the three decennial Censuses: 1990, 2000, and 2010, which contain both local urban Hukou population and migrants in cities. The detailed procedures are described in our paper.

The results are graphically illustrated in the last two panels of Figure 3. The net effect of including migrants in the sample is to lower the unemployment rate and to raise the labor force participation rate. This is not surprising given that the majority of migrants come to cities for work, and they would return to their rural home if there were no job opportunities in cities. As for the time pattern, although the migrant share has gradually increased over time, the general trend is very similar to our baseline results with only local-urban-Hukou people. For the post-2000 period, where estimates peak, our estimates for the unemployment rate for all urban population lie between 5% and 7%, which are in line with the range for upper-middle-income countries similar to China (see Figure 1). The labor force participation rates range between 78% and 80% in that same period.