The Productivity Consequences of Pollution-Induced Migration in China

Severe air pollution induces workers to move from productive to unproductive regions, reducing their contribution to the aggregate productivity in China. In this paper, we quantify the productivity and welfare consequences of this important new pattern of migration. We find that the productivity losses from pollution through the indirect migration channel are approximately as much as the direct health costs of pollution. 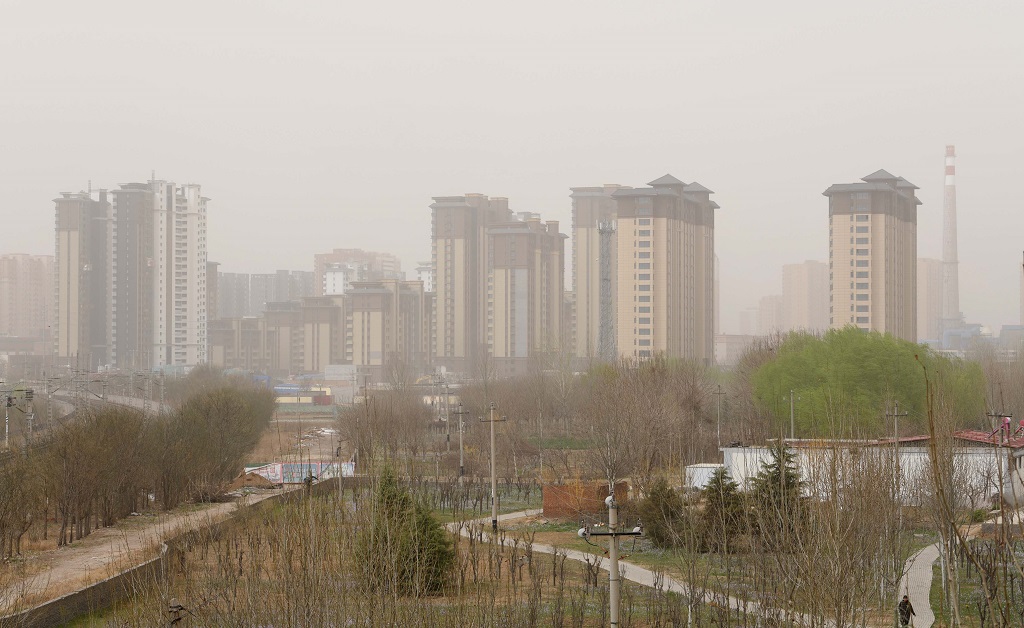 The large productivity gaps across regions or sectors within developing countries create an enduring development puzzle: Why do workers remain in low productivity areas when they could experience wage gains elsewhere? To answer that question, it is important to understand the drivers of worker location choices, as migration has the potential to produce substantial economic gains. The literature proposes a few explanations for the low rates of within-country mobility observed across the world: migration costs may be high, migration may be risky, and potential migrants may have something valuable at home that cannot easily be taken with them (see Note 1).

We carefully evaluate another explanation for this enduring puzzle: severe pollution induces workers to relocate from productive to unproductive regions within their country. In this paper (Khanna et al., 2021), we study the aggregate productivity impacts of migration patterns in China and how they respond to the spatial dispersion of pollution.

Migration and pollution are two defining features of China's impressive growth. Particulate matter pollution has increased dramatically in China in the last 20 years (Figure 1a). Dispersion in the intensity of pollution across Chinese cities has also increased, and a few cities, especially in the eastern part of China, have become very polluted (Figure 1b). Figure 2 shows that people are emigrating from polluted areas, and high-skilled workers are most likely to emigrate to areas away from pollution. These pictures suggest that there is some asymmetry in the stronger migration response among skilled workers, compared to unskilled workers.

Figure 1: The Distribution in Pollution Across Cities and Over Time 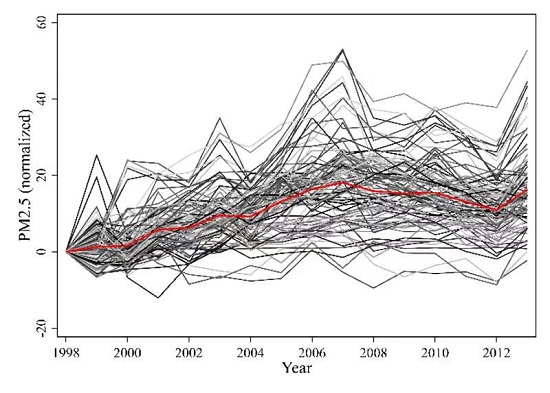 (b) PM2.5 Concentration in China 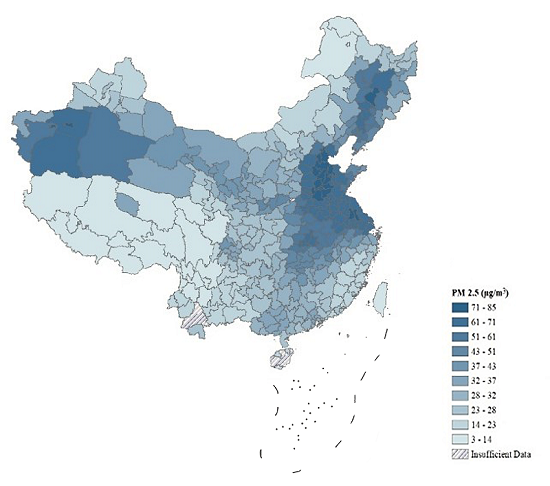 Notes: Spatial and temporal distribution of PM2.5 using the Global Annual PM2.5 Grids. The map shows the geographic spread in 2015. Figure 1a shows the increase in PM2.5 over time for the 100 largest cities in China, relative to the 1998 PM2.5 value (the difference in respect to 1998). The red line is the unweighted average.

Figure 2: The Geographic Distribution of the Share of Out-Migrants by Skill 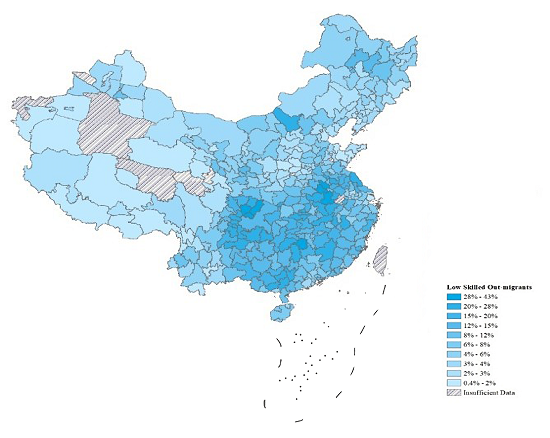 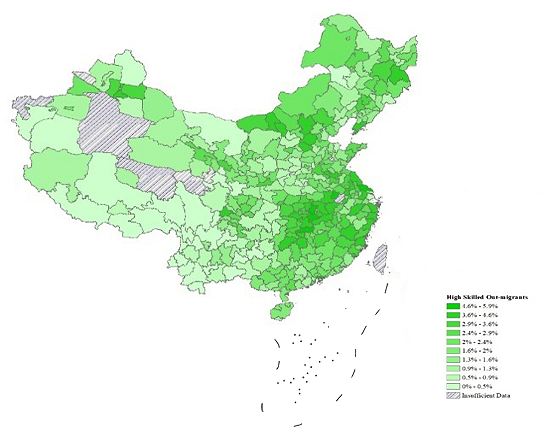 We may be worried, however, that the simple relationship between air pollution and migration is confounded by other factors, such as the size of the local industrial sector. To build confidence that our estimates indeed represent the causal effect of air quality on mobility, we assemble several datasets and investigate this relationship under multiple independent sources of data variation. First, we derive exogenous fluctuations in pollution from wind direction and the historical placement of distant thermal power plants (Freeman et al., 2019). Second, we leverage a meteorological phenomenon called thermal inversions, which traps pollution and worsens air quality (Chen et al., 2017). Across these research designs, we find robust evidence that college-educated workers leave areas with higher levels of pollution, while the less educated are comparatively less responsive.

Yet, quantifying the exact migration responses without a model remains a challenge given that all parts of the country are affected either directly or indirectly by the relocation of workers. This implies that there are no “unaffected control groups” that are often needed for meaningful empirical analysis. Instead, the quantities of workers, equilibrium wages, and pollution levels are jointly determined in spatial equilibrium. To tackle this issue, we build a spatial model of demand and supply of skilled and unskilled workers across Chinese cities. This model allows us to estimate the general equilibrium migration responses to pollution and to quantify the consequent changes in productivity and welfare.

The model allows us to quantify how much of the wage gap across Chinese cities is attributable to pollution differences. As shown in Figure 4, our estimates imply that equalizing pollution between high-pollution Tianjin and low-pollution Chongqing would bridge the between-city skilled wage gap by 14%. Companies in China reportedly offer up to 20% wage premiums to induce workers to relocate to polluted productive cities, so our estimates appear to be in line with the real-world behavior of firms and workers (AFP News, 2019). 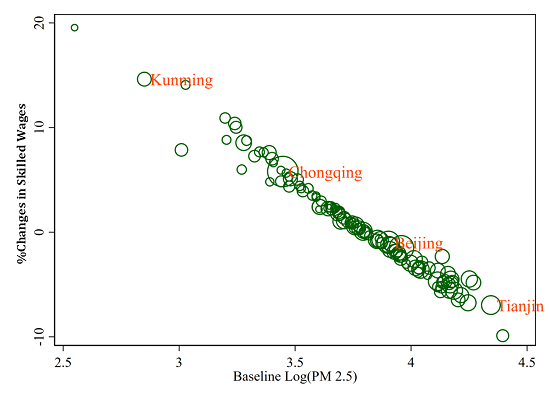 The fact that pollution explains a meaningful portion of the productivity gaps across cities sheds some light on the behavioral puzzle we raised at the outset: concerns about pollution keep workers away from cities where they could be more productive. This phenomenon is not limited to China. When 9,000 Delhi residents were asked about their plans to deal with pollution, the single-most common response was “relocate” (Kapur, 2019). Recent reports of emigration following wildfires in California suggest that this may not be solely a developing- world phenomenon either.

To quantify the productivity loss from pollution, we examine the consequences of halving the level of pollution in Beijing. We find that GDP per worker rises by more than 12%, mostly as a result of skilled workers moving into Beijing. Unskilled wages in Beijing rise by at least 16% as more skilled colleagues enter the city. We find that the increased wages are driven largely by the immigration of workers rather than the health benefits of lower pollution.

Next, we study the consequences of policy choices regarding where pollution is located within the country. If we move pollution away from industrial centers that rely on skilled workers (like finance, technology, or skilled manufacturing), GDP in the country rises by 6.7%. Once again, the spatial re-sorting of workers plays a driving role in income increases, and relaxing migration costs (e.g., less stringent hukou restrictions) further amplifies the productivity effects.

Finally, we quantify the economic returns to The 12th Five-Year Plan on Air Pollution Prevention and Control in Key Regions in China. Despite targeting only three productive regions in China, this policy increases aggregate GDP in China by 3.6%, and the resulting migration response explains more than half of the economic gains. Reducing migration barriers can further increase the productivity impacts of pollution control.

Our analysis demonstrates that pollution can affect the migration of workers across cities, and often those workers move to less productive areas. A large body of literature has already documented that pollution lowers productivity by making workers unhealthy (Adhvaryu et al., 2016; Kahn and Li, 2019; Zivin and Neidell, 2012). Our contribution is to quantify the productivity losses stemming from differential mobility of skilled workers in response to pollution. We find these migration forces to be just as important as the pollution-health link. We further document that mobility costs (both physical and imposed by hukou policy) exacerbate these economic losses, and that migration and pollution control policies are linked. This evidence directly speaks to the tensions between environmental regulation and urbanization in the developing world (Glaeser, 2014). Pollution control coupled with policies facilitating migration have the potential to bring about increased economic gains in developing countries.

Arceo, E., R. Hanna, and P. Oliva (2016). Does the Effect of Pollution on Infant Mortality Differ between Developing and Developed Countries? Evidence from Mexico City. The Economic Journal 126(591), 257–280.

Glaeser, E. (2014aA World of Cities: The Causes and Consequences of Urbanization in Poorer Countries. Journal of the European Economic Association 12(5), 1154–1199.