In our recent work (Gu et al., 2019), we combine a difference-in-differences approach with a novel road speed dataset from Baidu Maps to provide evidence on the effect of subways on road congestion. We explore heterogeneous effects with respect to road characteristics. Guided by a conceptual framework of transportation mode choices, we shed light on the welfare impact of subways, using Beijing as an example. 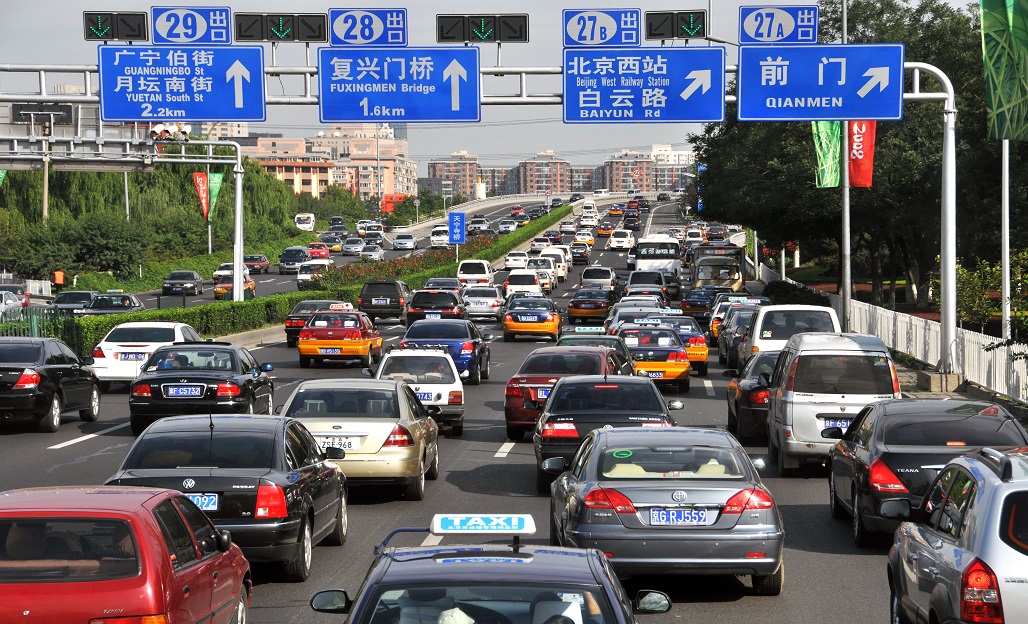 Traffic congestion is a major challenge facing many cities around the world. The problem is particularly acute in large cities in the developing world that have recently experienced rapid increases in population and car ownership. Urban rail transit systems (henceforth subways) are considered an effective way to reduce congestion because they have large capacity and do not require much surface land. By 2014, 171 cities worldwide had a subway system in operation (Gendron-Carrier et al., 2018). In China alone, total subway length increased from less than 400 kilometers in four cities in 2001 to about 5,000 kilometers in 30 cities by 2017 (Cui et al., 2018) (Figure 1). 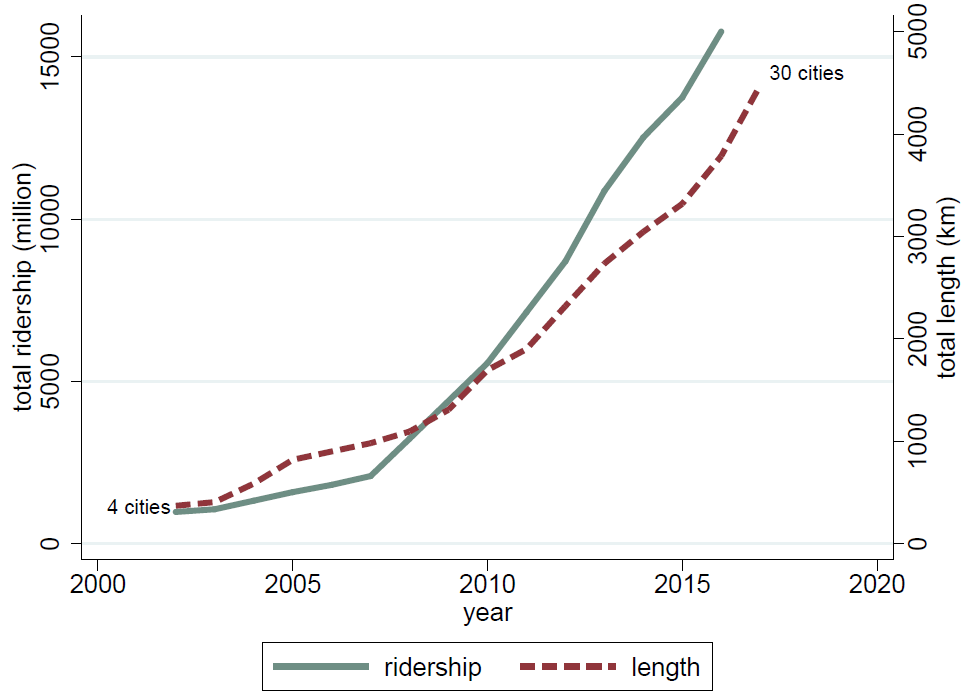 This paper takes advantage of the recent massive construction of subways across Chinese cities. We focus on the 45 new subway lines (including seven extensions of existing lines) launched between August 2016 and December 2017 across 25 cities. We use a novel source of traffic speed data from Baidu Maps—China’s leading provider of digital map services— which collects and processes real-time traffic information at the road segment level from user-generated data.

We obtain hourly speed data between August 1, 2016 and January 31, 2018 for a sample of road segments near subway lines. Road segments in the sample are those inside 2.5 kilometer buffer zones of selected 5 kilometer segments of existing, new and planned subway lines. After applying several restrictions, our baseline sample includes more than 20,000 road segments that cover all 42 cities in Mainland China that had an existing or planned subway system by the end of 2017. The spatial and temporal dimensions of our data are a significant improvement on existing studies that typically look at a shorter period for a much smaller number of subway lines.

Big data at the granular level allow us to adopt a saturated empirical model. Log speed is averaged at the weekly level and used as the outcome variable in a difference-in-differences (DID) estimation: road segments in cities that had existing or planned subway lines but did not have a new line launched during the sample period are randomly assigned to each treated line to serve as the control group. The control road segments are given a fake opening date that is the same as that of the corresponding treated line. All 45 treated lines and their controls are then stacked according to the week relative to opening. This stacked DID approach helps control for seasonality and macro trends common to all cities.

Perhaps the biggest challenge to identification is that most of the openings were at the time of the year—Chinese New Year—when traffic eases anyway in major cities, which combines with the fact that our control cities are systematically smaller. We address this by allowing for different seasonality with respect to city size. We find a similar effect when we restrict the analysis to the small number of openings that occured at other times of the year. The results are also similar from a two-way fixed effects model using only treated cities.

In the main specification we restrict the baseline sample up to six weeks prior to the opening. Subway construction itself could affect traffic conditions on nearby roads, thus making pre-trends uninformative about the nature of traffic conditions on these roads. We take advantage of an engineering fact of subway construction: once construction is mostly finished, a new subway line requires two to three months of testing the hardware and software systems. Therefore, traffic during the six weeks prior to opening can be assumed to be unaffected by the construction. We find quantitatively similar results when we include flexible time trends and a longer pre-treatment period.

We first investigate whether subways have any effect on road speed by focusing on weekday rush hours and road segments that are likely to be directly affected. Directly affected road segments, identified using the route-planning function of the digital map platform, are those that a person needs to travel through if one chooses to drive instead of taking the subway.

Inspection of the coefficients in the pre-treatment period suggests that we cannot reject the parallel trend assumption (Figure 2). The launch of a new subway line has an immediate positive effect on the speed in directly affected road segments. In the first week after a line opens, speed in those road segments increases by about 2.5% relative to that in the control segments. The effect increases to about 5% in the sixth week before it declines and stabilizes between 2% and 3%. We track up to 48 weeks after the line opening; the effect remains stable and statistically significant.  The average effect in the post-treatment period is between 3.6% and 4.4%. 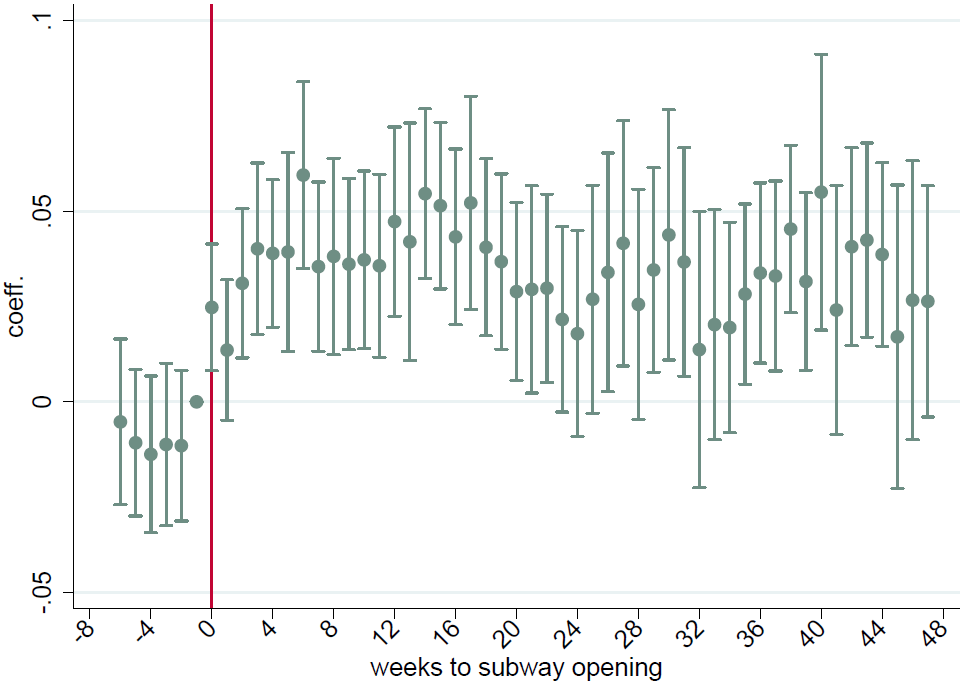 This result speaks to the famous but rarely tested hypothesis in urban economics—the “fundamental law of congestion” (Downs, 1962, 2000). This law suggests that the elasticity of vehicle kilometers traveled (VKT) with respect to lane kilometers is one. Thus, adding road capacity does not reduce congestion as additional traffic would be induced with the alleviation of traffic congestion. Our finding, however, suggests that building subways—an alternative way to add road capacity—does reduce congestion in Chinese cities, at least in the short run.

We find substantial heterogeneity in the congestion-relieving effect of a new subway line on different types of road segments (Figure 3). For 23 out of the 25 treated cities, we are able to extract road segments near an existing or planned subway line. We include all sampled road segments in these treated cities to study how the effect spreads through the urban transportation network. The effect is larger for directly affected road segments, for initially more congested roads, suggesting that marginal switchers from road vehicles to subways are more likely to be those who experienced high levels of road congestion (Anderson, 2014). The effect declines quickly with the distance to the new subway line. There is suggestive evidence of a network effect of the subway system: road segments that are far away from the new subway line but close to an existing subway line also experience substantial increases in speed. We also expand the analysis sample to include non-rush hours and find that the effect is larger in rush hours, especially for road segments that have the same direction as the flow of the traffic. 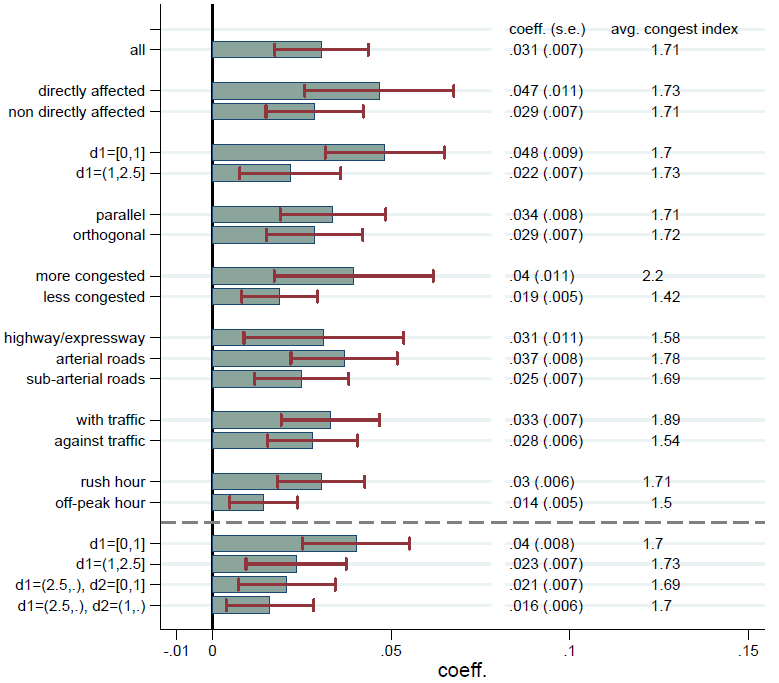 To corroborate our finding on road speed, we study the substitution patterns among different modes of transportation using micro data from household transportation surveys in Beijing. We find that improved access to the subway is associated with increases in subway trips and decreases in bus trips, car trips, and annual vehicle kilometers traveled by private cars.

We build a conceptual framework of transportation mode choices. The framework leads to a formula for the welfare impact of subways that relies only on observable quantities and prices. The welfare impact can be decomposed into three components: (1) welfare gains from savings in travel time by road vehicles (including automobiles and buses), (2) welfare gains for those who switch to the subway from road vehicles, and (3) changes in government spending on public transit.

The main empirical result of the paper, the effect of subways on road speed, helps us estimate the first component of the welfare expression. We do so, focusing on commutes in Beijing. Our estimate suggests that Beijing’s subway increases rush-hour average road speed by 3%.  Using additional data on volumes of ridership, average length of commutes, and average wages, we calculate that the time saved for each automobile or bus commute from reduced congestion is worth 0.1 USD. Relying on stronger assumptions and correlational evidence, we find that each of the other two terms is large in magnitude, but they offset each other. If accurate, this would suggest that the benefit of Beijing’s subway system exceeds its cost, even without considering other potential benefits of the subway such as the reduction in air pollution.