Brain Drain: The Impact of Air Pollution on Firm Performance

By exploiting the exogenous variation in air pollution caused by China’s central heating policy, we find that air pollution reduces the accumulation of executive talent and high-quality employees. We also find that firms located in polluted areas have poorer performance, especially for firms with greater dependence on human capital. 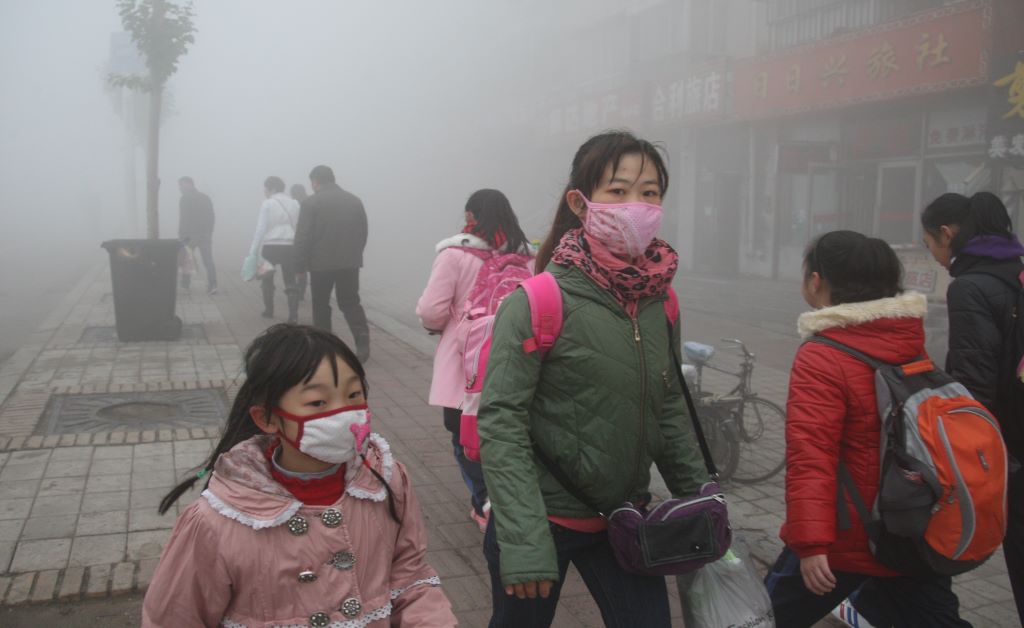 China’s rapid economic growth in the past three decades has lifted more than 600 million people out of poverty. However, great economic achievement has come at the expense of environmental pollution. The percentage of residents in China exposed to PM2.5 concentrations surpassing 10 μg/m3 has exceeded 92% since 2000 and has risen to 98% in more recent years (Hsu et al., 2014). The worsening air quality in China has provoked great public concern and could drive skilled individuals to leave the polluted areas, which may impede economic growth. Hugo Barra’s comment raises the question of whether his case is merely anecdotal or is really the tip of the iceberg. This study addresses this question.

Air pollution is widely believed to have adverse effects on human health. Tiebout (1956) suggests that individuals have heterogeneous preferences for public goods and sort themselves into localities that most closely match those preferences. We expect that high-quality individuals are more likely to “vote with their feet” in response to air pollution. Skilled and highly educated people tend to be a high-income group and demand a higher quality of life. They also have greater economic means to move to cities where better air quality is capitalized into housing prices (Chay and Greenstone, 2005). Moreover, they have better knowledge on the harmful effects of air pollution and face lower costs in searching for new jobs (Arntz, 2010). As a result, firms located in more-polluted areas are less able to recruit and retain high-quality individuals, leading to the loss of corporate human capital. We call this the brain drain hypothesis.

To test our hypothesis, we start by examining how people decide on their intended places of work when air pollution is high in their domicile. Using the Search Volume Index (SVI) of Baidu as a measure of people’s intended workplaces, we find that, when air pollution increases in a city, people living there search more often for work in places that have less pollution and search less often for work in places that have more pollution (see Figure 1).

Figure 1: SVI for Work in More- and Less-Polluted Cities 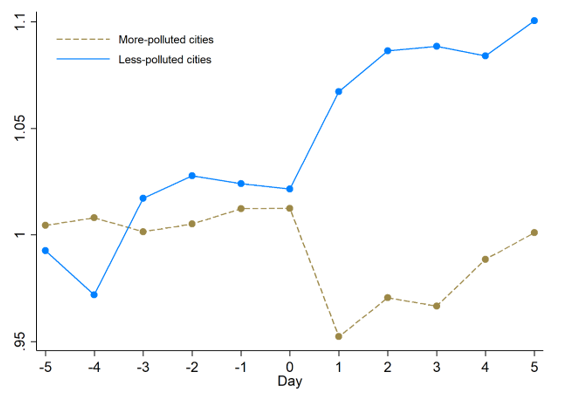 We find the same pattern when doing regression analyses that control for regional characteristics. Moreover, we find that the effect is more pronounced in cities where air pollution is more likely to trigger people’s concern about their health, which is measured by the sensitivity of SVI to air quality in a city. The results suggest that air pollution’s environmental health risks influence individuals’ workplace decisions.

Next, we examine whether such an air pollution effect on people’s sorting decisions is compounded into corporate human capital formation based on firms publicly listed on the Shanghai and Shenzhen stock exchanges from 2000 to 2016. To deal with potential endogeneity problems, we use a regression discontinuity design (RDD) that exploits exogenous variation in air pollution created by an arbitrary policy at the Qinling-Huai River (QH) boundary in China (Almond et al., 2009). China established a central heating system beginning in the 1950s that continued to develop through the 1980s. This policy states that due to budgetary constraints, free heating is provided only to the northern areas of the QH. The central heating system rests on the use of coal-based water boilers and releases massive amounts of particulates  and other pollutants that lead to a significantly higher level of air pollution in the heating areas (Almond et al., 2009; Chen et al., 2013). As shown in Figure 2, The QH boundary well partitions the areas with the air quality index (AQI) above and below 100 (AQI higher than 100 indicates pollution), suggesting a significant difference in air pollution at the boundary. We exploit this difference and examine whether firms have significant differences in human capital and performance between the two sides of the boundary.

Figure 2: Qinling-Huai River and Air Pollution by Regions in China 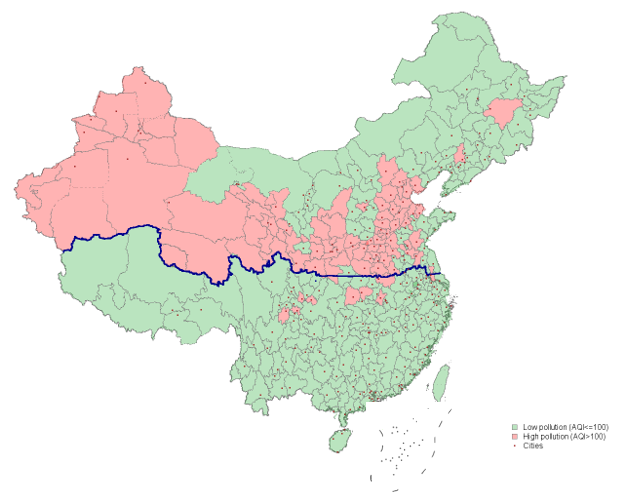 The blue line represents the boundary of the Qinling-Huai River. The areas with an average Air Quality Index (AQI) from 2000 to 2016 above (below) 100 are marked in red (green). The red dots represent cities where listed firms are domiciled. The regions on the north side of the Qinling-Huai River boundary constitute the heating area, and the regions on the south side of the boundary constitute the non-heating area.

We gauge corporate human capital on the basis of both firm managers and employees. Specifically, we check whether a firm’s top executives (i.e., the CEO and board chair) were born or obtained college degrees outside the region where the firm is domiciled and whether they studied or worked abroad. We also calculate the proportion of highly educated employees and the proportion of skilled employees. Managers with diverse backgrounds and foreign experience and workers with high education levels and technical skills are shown to significantly contribute to the improvement of firm performance (Haltiwanger, Lane, and Spletzer, 1999; Giannetti, Liao, and Yu, 2015; Ashraf and Ray, 2017; Chemmanur et al., 2019).

Figure 3 provides a visualization of the human capital difference for firms across the central heating border. We find that there is a discontinuous drop in high-quality executives and firm employees at the border from the non-heating side to the heating side. We then follow prior studies, such as Almond et al. (2009) and Chen et al. (2013), to estimate an RDD model that exploits the discontinuous variation at the QH boundary. 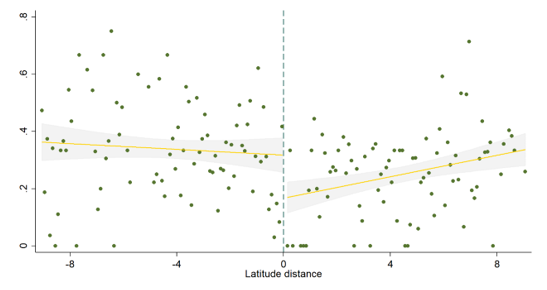 Panel B: % of high-quality employees 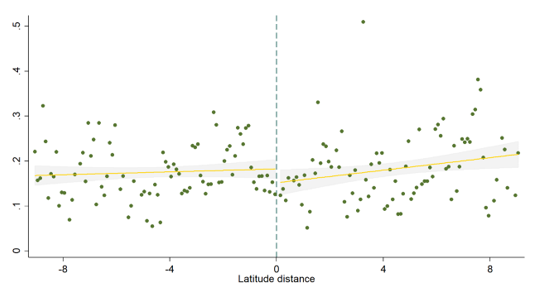 This figure plots the human capital of firms across the Qinling-Huai River. Panel A plots average executive talent in a region, which is the average of Non-locally born executives, Non-locally educated executives, and Executives with overseas experience. Panel B plots the average percentage of high-quality employees, which is the average of the percentage of highly educated employees and the percentage of skilled employees. Each dot is generated by averaging the human capital measures of firms across locations within 0.1° of latitude. The x-axis represents the latitude degree, with 0° indicating the latitude of the Qinling-Huai River boundary and positive (negative) degrees indicating areas on the heating (non-heating) side of the boundary. The line represents the fitted values of human capital from a linear regression. The shaded area represents a 90% confidence interval around the fitted value.

We control for a variety of firm and regional characteristics and find that firms located on the heating side are less likely to have top executives that were born or obtained a college degree outside the province where the firm is located or that studied or worked overseas. We also find that firms located on the heating side have a lower percentage of employees who received a bachelor’s degree or above and were equipped with technical skills than those located on the non-heating side. However, we find there is no significant difference in the percentage of employees with a low level of education or the percentage of production, sales, financial, and administrative employees. The results are consistent with our hypothesis that air pollution has a greater impact on skilled labor. Moreover, we find that the brain drain effect is stronger in cities where air pollution is more likely to trigger people’s concern about their health, suggesting that air pollution affects corporate human capital through the channel of environmental health risk.

This study (Xue, Zhang, and Zhao, 2019) contributes to the literature on corporate human capital. We document an important non-economic factor that affects the accumulation of corporate human capital. We provide micro evidence that the stock of talent with respect to both management and employees is essential for the improvement of firm performance.

We also add to the literature on the economic consequences of environmental pollution. We shed light on the fact that people’s willingness to pay for air quality improvement is low by showing that migration sorting is an alternative defensive behavior to prevent exposure to air pollution. Moreover, we document a long-term impact of air pollution on firms, whereas much of the prior research in this area focuses on the short-term costs of air pollution (see Chang, Huang, and Wang, 2018; Dong et al., 2019; Huang, Xu, and Yu, 2019; Li et al., 2019).

Chen, Y.Y., Ebenstein, A., Greenstone, M., and Li, H.B., 2013. Evidence on the impact of sustained exposure to air pollution on life expectancy from China's Huai River policy. Proceedings of the National Academy of Sciences of the United States of America 110, 12936–12941.