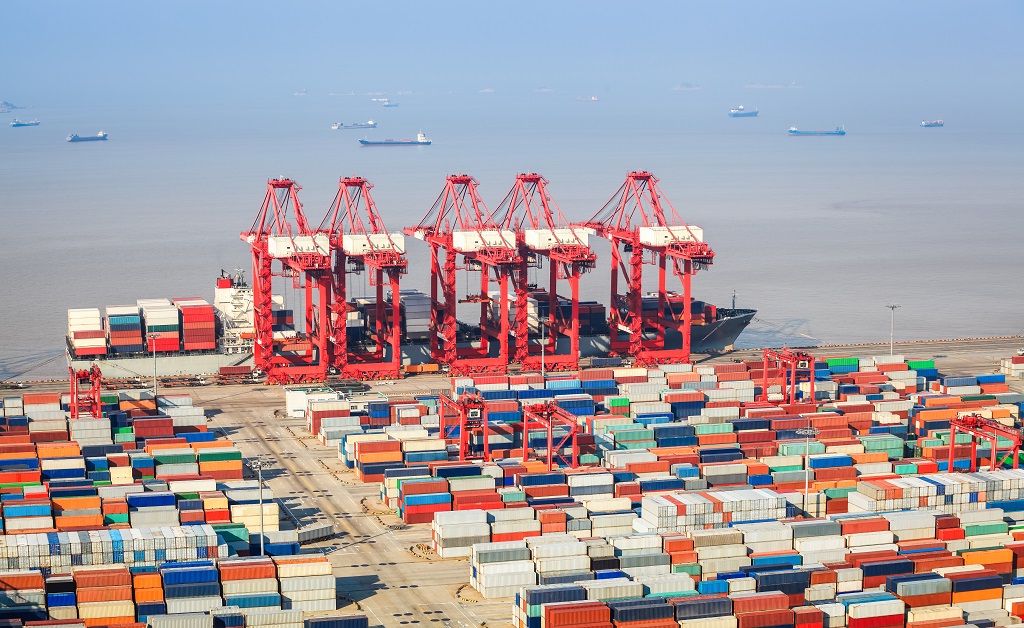 In an influential study, Autor, Dorn, and Hanson (2013, hereafter ADH) show that rising import competition from China (the “China shock”) has caused a substantial employment decline in the United States. Furthermore, the negative effect goes beyond manufacturing and exists for nonmanufacturing workers as well. Such results, accompanied by findings in other studies such as Pierce and Schott (2015) and Acemoglu et al. (2016), have important policy implications and challenge the benign view towards globalization.

In this research, we investigate one reason for the strong impact of the China shock on the U.S. labor market, specifically, the housing market in the United States. We find it is important to control for changes in housing prices when estimating the employment effect of the China shock because during the same period when the United States faced increasing import competition from China, its domestic economy also experienced a national housing boom that started in the late 1990s and varied across regions. 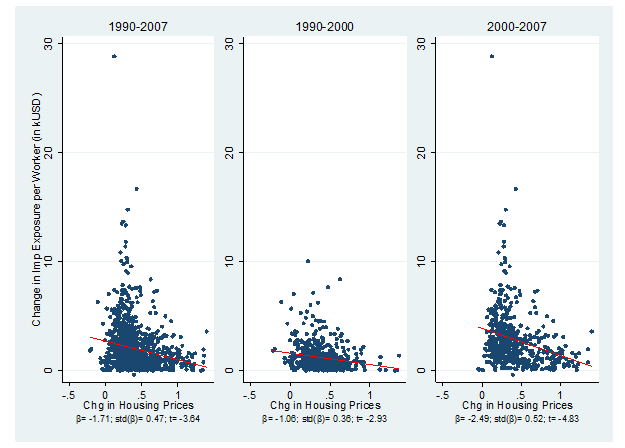 Our empirical approach builds on that in ADH but augments it with a housing variable. We regress local changes in employment share on local changes in import exposure and local changes in housing prices over two stacked periods, 1990–2000 and 2000–2007 (see Note 1). As in ADH, imports from China are instrumented by Chinese exports to eight other advanced economies. To isolate the exogenous part of housing price changes, we use two instrumental variables for housing. One is the estimated structural break from rapid changes in housing prices that occurred in each region. The idea relies on the emerging consensus that much of the variation in housing prices during the housing boom in the United States was from speculative activities and not from changes in fundamentals. We therefore estimate for each local area a structural break in the evolution of housing prices and treat these “sharp” breaks as exogenous to fundamental shocks (see also Ferreira and Gyourko, 2011; Charles et al. 2016).

Table 1 reports the first-stage results for instruments. All instruments are relevant, with F- statistics above the critical value. The China shock does affect the U.S. housing market, with the estimated coefficient on the import instrument being statistically significant (at the 10% level) for housing price changes. Therefore, the China shock affects the U.S. labor market through at least two channels. One is the “direct” effect on employment through import competition; the other is the “indirect” effect through the magnification channel of the housing market. 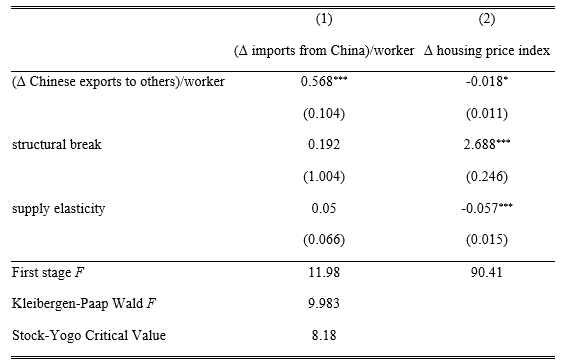 Panel IV goes further to shut down the endogenous response of housing to import exposure. To achieve this, we construct a predicted housing price change using only the housing instrument term from the first-stage regression, and use this predicted housing variable in the second-stage regression. The reduction of the coefficients is less, but the patterns are qualitatively similar. Now the independent effect of the China shock on total employment is reduced by around 30%, and the effect on nonmanufacturing employment for college workers remains positive and statistically significant. 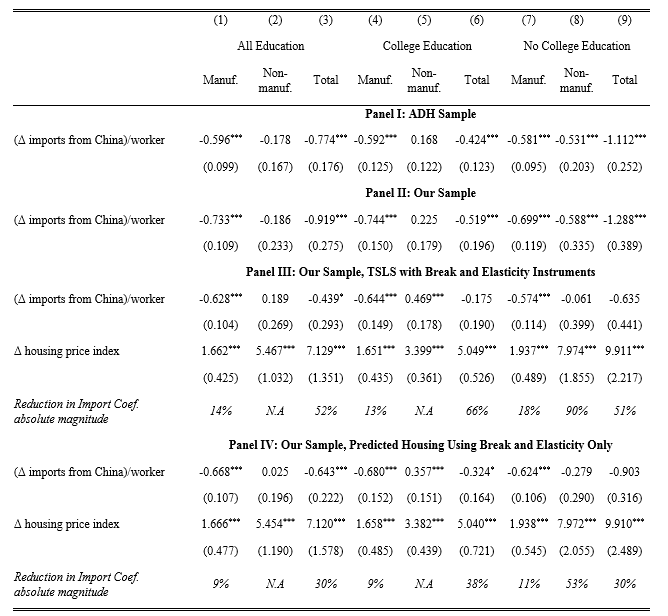 
Note 1: All regressions include the full vector of economic and demographic controls as in ADH. All regressions are weighted by the start-of-period commuting zone’s share of national population.

Note 2: Our sample consists of those commuting zones that have information on high-frequency housing price and supply elasticity data. The excluded commuting zones are mainly rural regions. The sample accounts for 90 percent of the U.S. population and closely resembles the original, complete sample in the statistics of all key variables.

Charles, Kerwin Kofi, Erik Hurst and Matthew J. Notowidigdo (2016) “The Masking of the Decline in Manufacturing Employment by the Housing Bubble,” Journal of Economic Perspectives, 30(2):179–200.