The Unintended Impacts of Agricultural Fires: Human Capital in China

The practice of burning agricultural waste is ubiquitous around the world, yet the external human capital costs from those fires have been underexplored. Using data from the National College Entrance Examination (NCEE) and agricultural fires detected by high-resolution satellites in China from 2005 to 2011, this paper investigates the impacts of fires on cognitive performance. We find that a one-standard-deviation increase in the difference between upwind and downwind fires during the exam decreases the total exam score by 1.42 percent of a standard deviation (or 0.6 points), and further decreases the probability of getting into first-tier universities by 0.51 percent of a standard deviation. 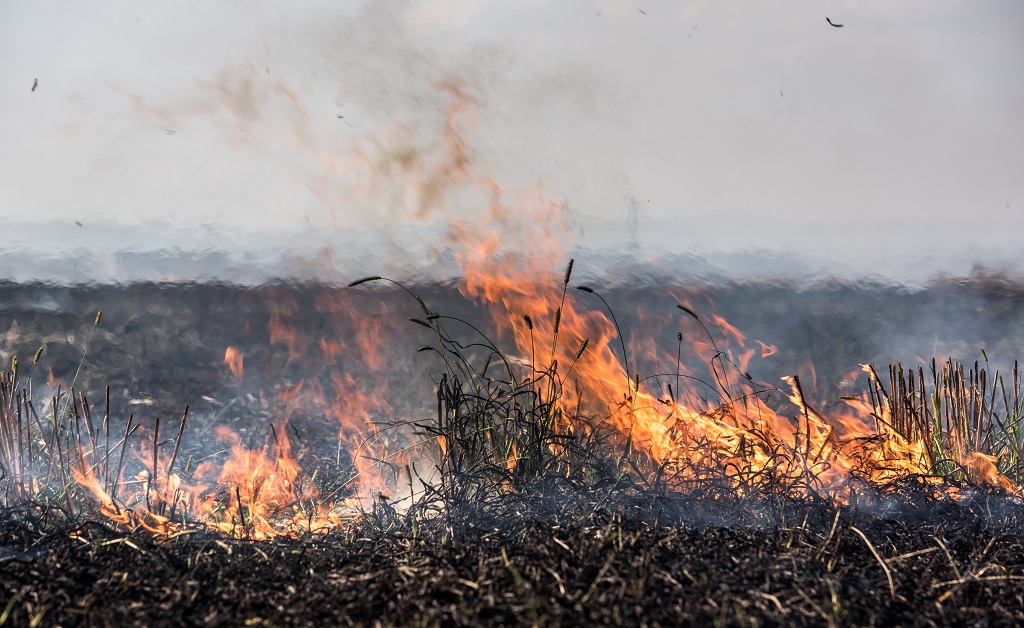 The deliberate setting of fires as a tool for agricultural management has a long history that remains ubiquitous around the world today (Andreae and Merlet, 2001). In modern agriculture, the principal benefit from these fires takes the form of avoided labor costs otherwise required to clear brush, remove crop residues, and manage invasive plant species (Levine, 1991). At the same time, these fires generate considerable smoke comprised of a number of pollutants that are known to be harmful to human health (e.g., Chay and Greenstone, 2003; Currie and Neidell, 2005; Schlenker and Walker, 2015). Yet, the direct study of the causal relationship between agricultural fires on human health has been greatly hampered by concerns of endogeneity and the competing benefits and costs from local fires. One notable exception is the recent study by Rangel and Vogl (2018), which examines the impacts of sugarcane harvest fires in Brazil on infant health by exploiting wind direction for empirical identification.


Given the emergent literature showing that pollution can also harm a range of other human capital outcomes (e.g., Graff Zivin and Neidell, 2012; Hanna and Oliva, 2015; Chang et al., 2016, 2019; Ebenstein et al., 2016), the authors examine the impacts of agricultural fires on one important component of human capital – cognitive performance. Our analysis of the impacts on young and healthy adults in a high-stakes environment generalizes and extends evidence from a recent working paper that examines the impact of fires on survey-based measures of cognitive decline amongst the elderly in China (Lai et al., 2018).

More specifically, we exploit high-resolution satellite data on agricultural fires in the granary regions of China and a unique geocoded dataset on test performance on the Chinese National College Entrance Examination (NCEE) to investigate the impacts of fires on cognitive performance. This setting is attractive for a number of reasons. First, the majority of agricultural fires take place in the developing world, where environmental controls are less stringent and the returns to human capital are generally substantial. China, in particular, is the largest grain producer in the world, with approximately one-third of all grain cropland managed through burning practices (see Note 1).

Second, the NCEE is one of the most important institutions in China.  It is taken by all seniors in high school (around 9 million students each year) and the exam score is almost the sole determinant of admission to institutions of higher learning in China. As such, the NCEE serves as a critical channel for social mobility with important implications for earnings over one’s life-cycle (Jia and Li, 2017). Test takers face high-powered incentives to do as well as possible on the test and thus any impact from agricultural fires is likely to represent an impact on cognitive performance rather than effort.

Finally, several features of the NCEE make it particularly well-suited to causal inference. The exam date is fixed and thus self-selection on test dates are impossible. Figure 1 shows that the exam takes place during the height of the agricultural burning season. Moreover, students must take the exam in the county of their household registration (hukou), rendering self-selection on exam locations virtually impossible (see Note 2). Our NCEE data includes test scores for the body of students who were admitted into colleges and universities between 2005–2011. Our baseline sample includes three provinces: Shandong, Henan, and Anhui, as they have the most intensive rate of agricultural fires during the NCEE period (Figure 2). 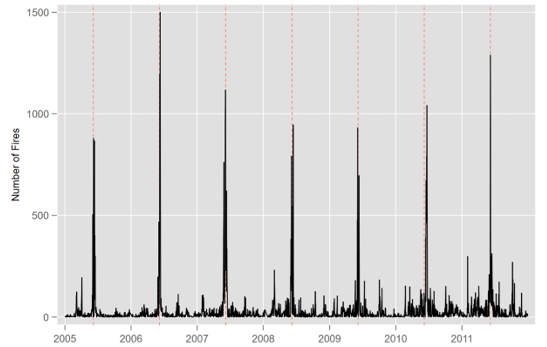 This figure plots the daily number of agricultural fires in Henan, Shandong, and Anhui Provinces during 2005–2011. Red dash lines indicate the NCEE period each year. 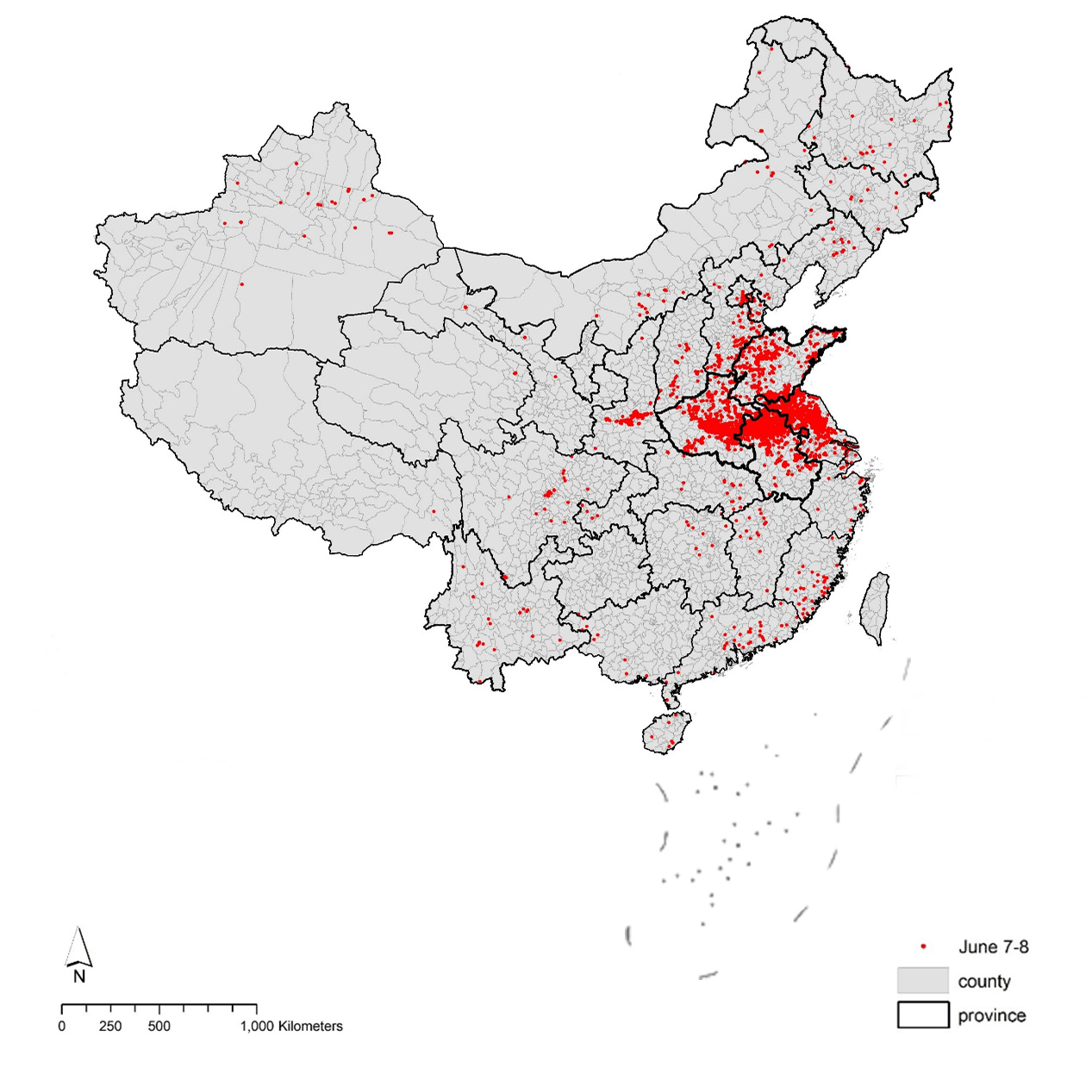 Despite the many virtues of our empirical setting, identifying the causal effect of agricultural fires on cognitive performance is challenging for reasons alluded to earlier. Agricultural fires are designed to reduce labor demands and improve farm profitability, both of which could also impact test performance. For example, if some agricultural labor is typically supplied by students, agricultural fires could improve test performance by providing them with more time to prepare for their exams. To address concerns of this type, we follow the approach recently pioneered by Rangel and Vogl (2018) and leverage exogenous variation in local wind direction (eight fixed octants) during the exam period conditional on county fixed effects. Specifically, we compare the effect of upwind and downwind fires on students’ test scores and interpret that difference as the causal effect of pollution exposure on students’ cognitive performance net of economic impacts. Figure 3 shows the definition of upwind and downwind fires. The implicit assumption under this approach is that, ceteris paribus, students upwind and downwind of the fire are differentially exposed to its pollution but share equally in its economic influences. This assumption is partly supported by the even distribution of fires across wind octants. 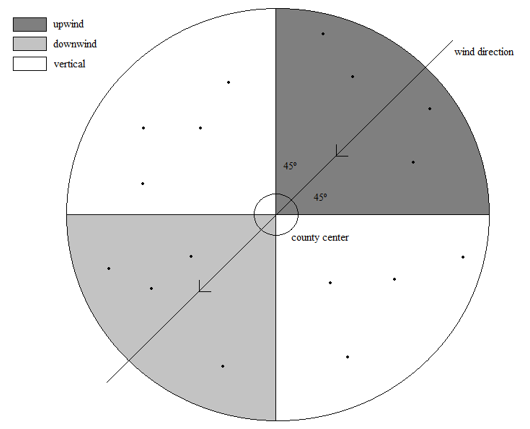 Definitions of upwind, downwind, and vertical agricultural fires within 50 km from the center of a county is illustrated using northwest wind as an example. Non-upwind fires include fires in the downwind and vertical directions.


Our results suggest that a one-standard-deviation increase in the difference between upwind and downwind fires during the NCEE decreases the total exam score by 1.42 percent of a standard deviation (or 0.6 points) and further decreases the probability of getting into first-tier universities by 0.027 percentage points. These impacts are entirely contemporaneous. Fires one to four weeks before the exam have no impact on performance. This suggests that pollution mainly affects students’ performance, rather than learning. Reassuringly, there is also no impact on performance for fires occurring one to four weeks after the exam (Figure 4). The results are robust to alternative approaches for assigning pollution to test-takers as well as a number of other specification checks. While a lack of pollution data from our study period does not allow us to utilize fires as an instrumental variable, data from a more recent period suggests that, consistent with evidence from Israel (Ebenstein et al., 2016), these cognitive impairments are likely the result of exposure to fine particulate matter. 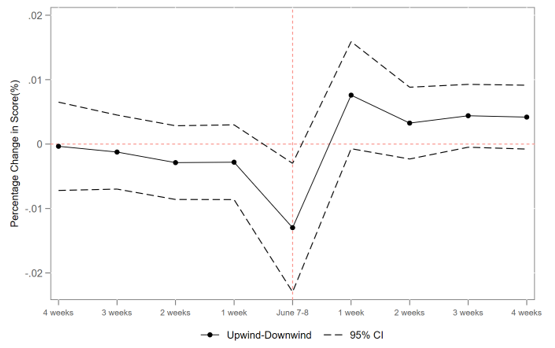 Together, these results suggest that agricultural fires impose non-trivial external costs on the citizens living near them.  They also contribute to ongoing debates about the appropriate role of standardized testing in determining access to higher education and employment opportunities (Ceci, 2000). While our analysis is based on NCEE test performance, the impacts are likely much broader, touching all aspects of life that rely on sharp thinking and careful calculations.  Indeed, the impacts in lower-stakes environs may well be larger as the incentives to succumb to the fatigue and lack of focus that also typically accompanies exposure to pollution are greater and thus more likely to exacerbate any impacts on cognitive decision-making. Given the importance of human capital for economic growth (Romer, 1986), these impacts should play an important role in the calculations of developing country policymakers when designing rules to manage the use of agricultural fires.

Note 2: The hukou system was established in 1958 to restrict migration within China.

Ceci, S. J. (2000). “So Near and Yet So Far: Lingering Questions about the Use of Measures of General Intelligence for College Admission and Employment Screening.” Psychology, Public Policy, and Law 6(1), 233.


Chay, K. Y., and M. Greenstone. (2003). “The Impact of Air Pollution on Infant Mortality: Evidence from Geographic Variation in Pollution Shocks Induced by a Recession.” Quarterly Journal of Economics 118(3), 1121-1167.