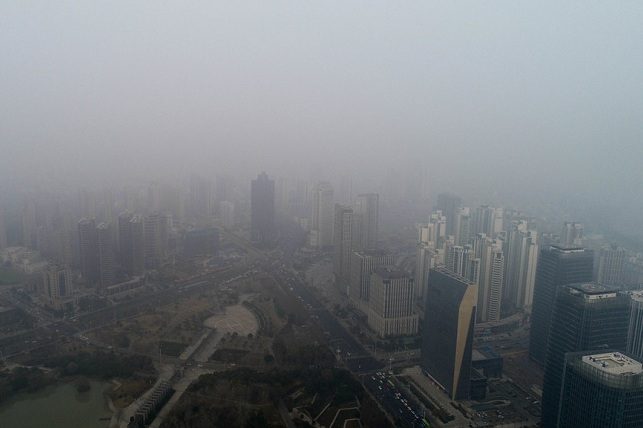 The quality of a government plays an essential role in promoting long-run economic growth and developing increased trust in institutions. Both heat and pollution can reduce the public sector’s short-run productivity; however, some government measures can mitigate the worst of the effects. These effects are likely to be larger in the developing world relative to developed nations. Recent research has documented that both private sector agricultural workers and indoor workers perform worse when the outdoors is more polluted and hotter (Adhvaryu et al. 2014; Chang et al. 2016; Chang et al. 2019; Graff Zivin and Neidell 2012; He et al. 2019).

We examine the effects of pollution and heat on public sector worker productivity in China by examining the decision time to rule on a given case, measured by the time elapsed between the date a case is assigned to a judge and the date when the case is adjudicated by that judge. A longer deliberation period creates docket congestion and delays. Thus, decision time is a useful metric of worker productivity. Our study looks at the decisions made by 135,924 judges in 9.7 million criminal and civil cases adjudicated during the years 2014 to 2016. The judges work in 337 different prefectures and all are highly educated and well-compensated. Given China’s high levels of pollution and hot summers, this dataset offers substantial variation to test how educated elite civil servants adapt to extreme conditions.

In studying the relationship between judicial performance and pollution and heat, the features of China’s justice system allow us to avoid several identification challenges. First, within the same court, each defendant’s case is in principle randomly assigned to a judge who presides over the trial, plea bargaining, and sentencing process. The judge is also unaware of the details of upcoming cases. Second, the case duration can be several months between the filing of the claim to case resolution. Despite adjudications being made indoors, the judge in charge might conduct on-site investigations to determine the real reasons for the litigation. They might be exposed to heat and pollution both indoors and outdoors before they make their final decisions. Third, individual judges have a high degree of personal discretion and independence in the way in which they evaluate files. Finally, given the extremely heavy caseload on the judge's docket, judges only preside in one courthouse. Trial court decisions are generally final because appeals are only available on limited bases, occur infrequently, and seldom lead to a decision reversal in China.

We find that during polluted days, judges in China do not perform as efficiently. As shown in column 1 of Table 1, a 1 percent increase in PM2.5 leads to a 19.9 percent increase in the time in which a case is handled. Judges have trouble ruling on more complex cases and are more likely to make decisions that are appealed and overruled (Kahn and Li 2019). These findings contribute an emerging body of environmental economics literature exploring the productivity costs for urban workers due to environmental exposure.

Our findings document that judges are both affected by heat and pollution; however, we also find that they are adapting to these conditions. The adverse impact of PM2.5 is widely-known to the Chinese populace after 2014. We find that judges have become better at adapting to PM2.5 over time once they were made aware of the threat of heat and pollution to their decision-making (see column 2 of Table 1). As shown in column 4 of Table 1, a 1 percent increase in smog alert days leads to a 0.8 percent decrease in the case-handling time. Results reported in column 5 of Table 1 indicate the non-monotonic effect such that the highest level of pollution category has a smaller effect than the second highest level of pollution category. We posit that judges are engaging in more aversion behavior when outdoor pollution is at such high levels. 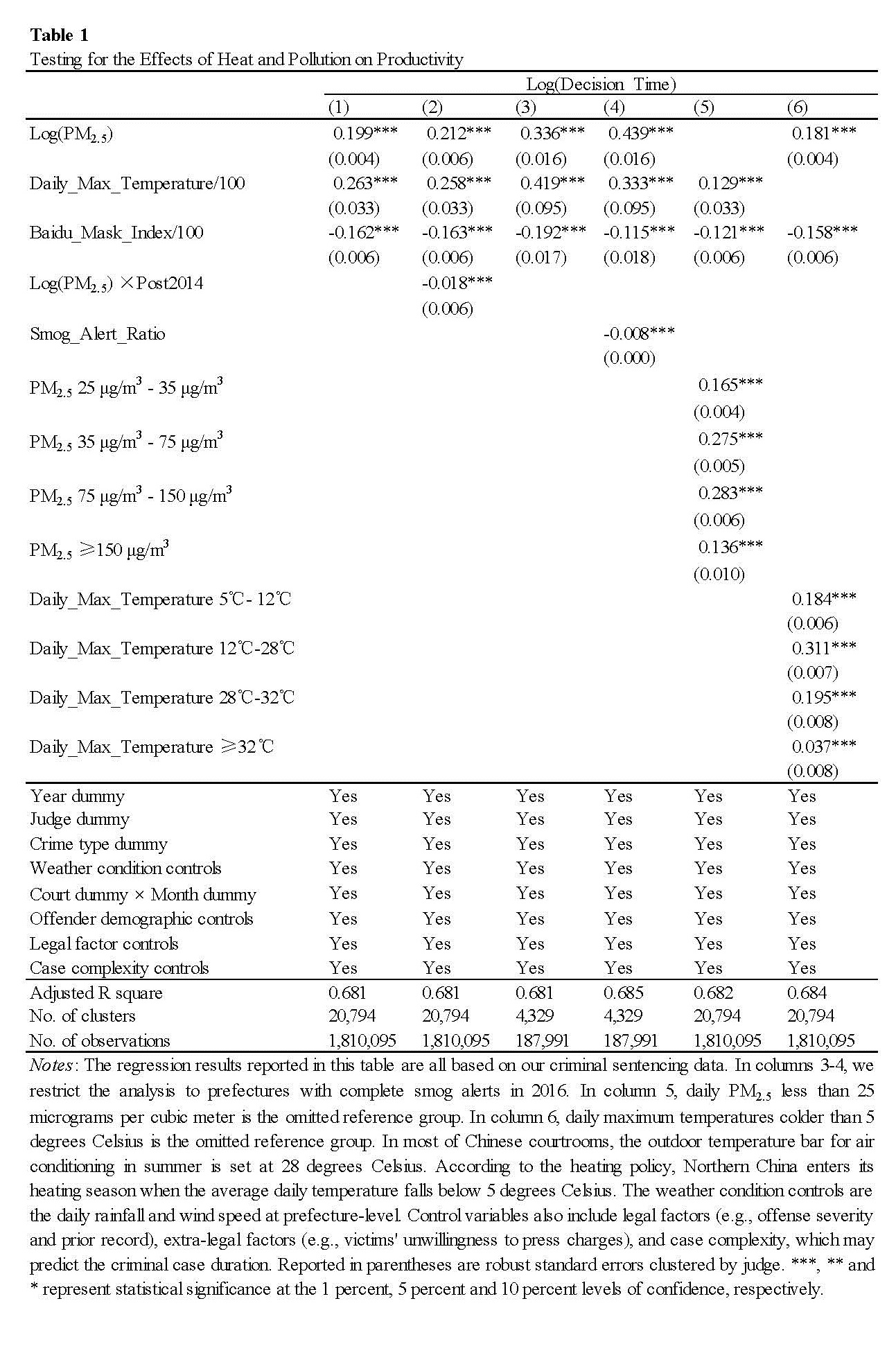 In contrasting our public sector estimates with some recent private sector estimates, we find that our implied elasticities are larger than the private sector elasticities (see Table 2). While we acknowledge that we examined just one sector of the Chinese government, we believe that our findings open up the possibility of exploring the general Alchian and Kessell (1962) hypothesis that the public sector uses “other people’s money” to provide high quality workplace work conditions. 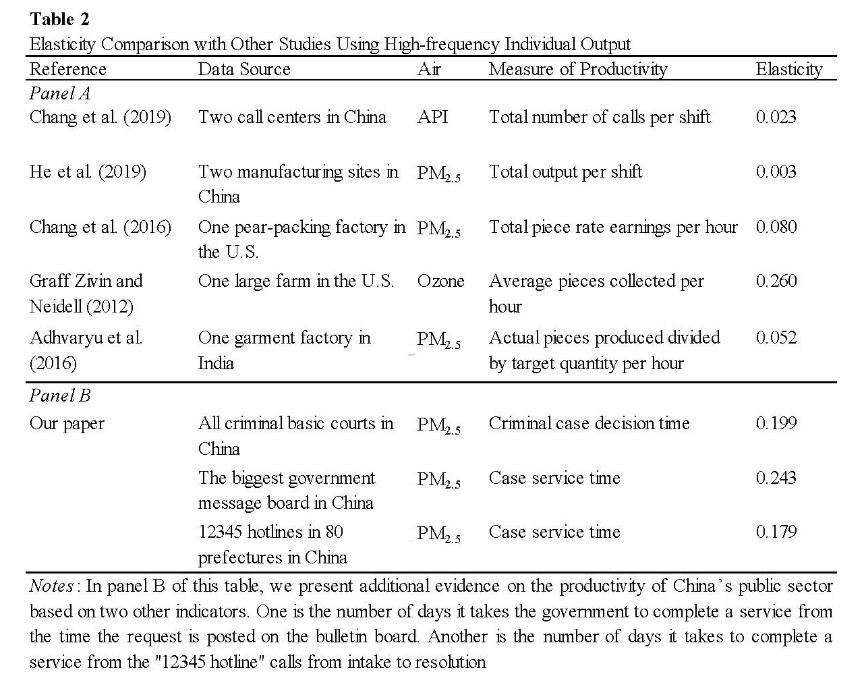 Aichian, A. Armen, and Reuben A. Kessel. 1962. “Competition, Monopoly, and the Pursuit of Pecuniary Gain.” In Aspects of Labor Economics. Pages 157-183. Princeton University Press.