What caused the enormous credit boom in China? This column by Kinda Hachem and Michael Song offers an unexpected explanation of stricter liquidity regulations on banks leading to a credit boom through competition between small and big banks and their heavy use of shadow banking investment instruments.

China announced a large fiscal stimulus package in late 2008 to combat spillover effects from the global financial crisis. Since then, credit in China has boomed, with the debt-to-GDP ratio nearly doubling between 2007 and 2014 and the ratio of private credit to private savings jumping from 65% to 75%. Given the timing, it may seem natural to assume that China’s credit boom was driven by stimulus. But is it really that simple? The answer, it turns out, is no.

The global financial crisis also preceded a movement towards stricter bank regulation in many countries, including new liquidity standards aimed at better addressing the maturity mismatches that are intrinsic in bank balance sheets (Diamond and Kashyap 2016). China was no exception and, in some regards, was actually ahead of the curve. China had espoused high liquidity standards since the mid-1990s, telling banks not to lend more than 75% of their deposits. The remaining 25% had to be kept liquid, with reserve requirements dictating how this liquidity was to be divided between pure reserves and other liquid assets. In practice, though, enforcement of loan-to-deposit rules was lax, and it was not until 2008 that Chinese regulators announced a tougher stance and began gradually increasing the frequency of their monitoring activities. The enforcement action began with regulators policing the end-of-year loan-to-deposit ratios of all banks more carefully. They then switched to end-of-quarter ratios in late 2009, end-of-month ratios in late 2010, and average daily ratios in mid-2011.

Figure 1 plots the loan-to-deposit ratios of big versus small banks in China, specifically the four large state-owned commercial banks (Big Four) and the twelve smaller joint-stock commercial banks (JSCBs). (Both groups operate nationally but average deposits per JSCB were 17% of average deposits per Big Four bank in 2013.) It is most instructive to look at loan-to-deposit ratios based on average balances during the year, as they are less easily window-dressed than year-end ratios and they mirror the frequency that regulators were targeting by mid-2011. It is clear from Figure 1 that stricter enforcement of the 75% loan-to-deposit cap imposed a constraint on the JSCBs but not on the Big Four. In other words, there was a meaningful regulatory shock to a subset of China’s banks beginning around 2008. 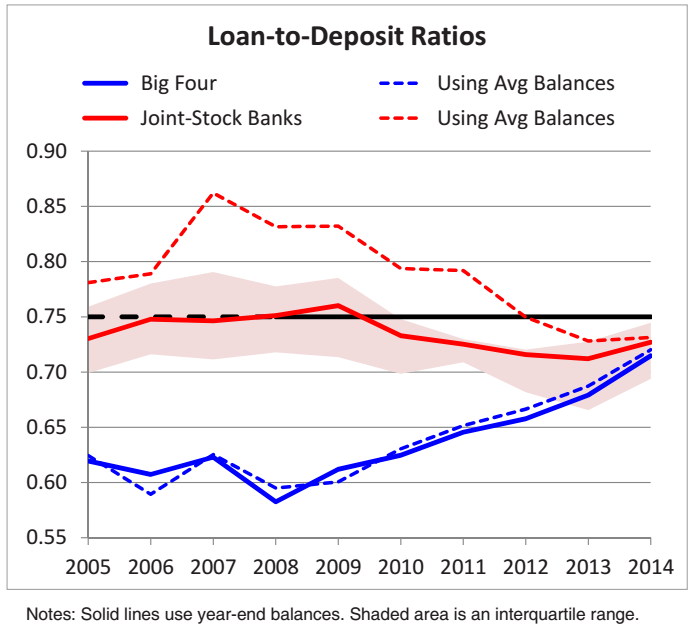 In a recent paper, we show that stricter liquidity regulation alone — that is, absent stimulus or any other exogenous shocks to the Chinese economy — accounts for one-third of China’s credit boom. Our analysis is rooted in a broader theory of unintended credit booms that is then calibrated to understand the Chinese experience.

On the surface, Figure 1 suggests that the JSCBs began decreasing their loan-to-deposit ratios in 2008 to comply with increasing enforcement of liquidity regulation. This is true as far as on-balance-sheet business was concerned. Off-balance-sheet, however, it was a different story. We show that JSCBs began aggressively offering a short-term savings instrument called a wealth management product (WMP) which does not have to be consolidated into bank balance sheets if issued without an explicit principal guarantee. Instead, the proceeds are invested off-balance-sheet and away from the reach of regulators, typically with the help of trust companies. There is a perception among investors that all WMPs are at least implicitly guaranteed by traditional banks, so the lack of explicit guarantees on off-balance-sheet WMPs is really only for accounting purposes (Elliott, Kroeber, and Qiao 2015).

Off-balance-sheet WMPs constitute shadow banking: they achieve the same types of credit intermediation and maturity transformation as regular banks without appearing on regulated balance sheets. Off-balance-sheet WMPs, and hence shadow banking in general, picked up as Chinese regulators toughened their stance on loan-to-deposit rules, growing from a trivial fraction of GDP in 2007 to roughly 16% of GDP by 2014. This is a dramatic rise for such a short period of time and accounts for the majority of the growth in broader measures of shadow banking that can be constructed using data from China’s National Bureau of Statistics.

Bank-level evidence confirms the heavy involvement of JSCBs. Between 2008 and 2014, small banks accounted for 73% of all new WMP batches and issued 57% of their batches without an explicit guarantee, while the Big Four issued only 46% of their batches in this way. Small banks also accounted for roughly 64% of off-balance-sheet WMP balances outstanding at the end of 2013.

Another interesting pattern revealed by Figure 1 is an increase in the loan-to-deposit ratio of Big Four banks since 2008. Using a money multiplier calculation to purge loans and deposits of the effects of the stimulus package, we estimate that the Big Four loan-to-deposit ratio would have increased from 0.57 in 2008 to 0.67 in 2014 absent stimulus. This is around three-quarters of the actual increase plotted in Figure 1, meaning that China’s biggest banks have become less liquid in a way not fully explained by stimulus.

We argue instead that rising loan-to-deposit ratios among the Big Four were primarily a response to the shadow banking activities of their smaller competitors. As JSCBs work to direct savings into off-balance-sheet WMPs, they raise the interest rates on these instruments above the rates on traditional deposits, poaching funding from the Big Four. Our model predicts a two-pronged equilibrium response by big banks. First, big banks issue their own WMPs but are willing to book more on-balance-sheet since they are not as constrained by liquidity rules. Second, big banks reorient some of their lending away from interbank markets to strategically increase the price of emergency liquidity and thereby discourage small banks from skirting liquidity rules.

Interbank conditions in China have indeed become tighter and more volatile since 2008. In the interbank repo market, for example, the average interest rate weighted by transaction volume was 50 basis points higher in 2014 than it was in 2007, despite fairly large monetary injections by China’s central bank since 2009 (Figure 2). The highest weighted average rate observed in daily data also increased by 150 basis points after 2007, reaching an unprecedented 11.6% in mid-2013. 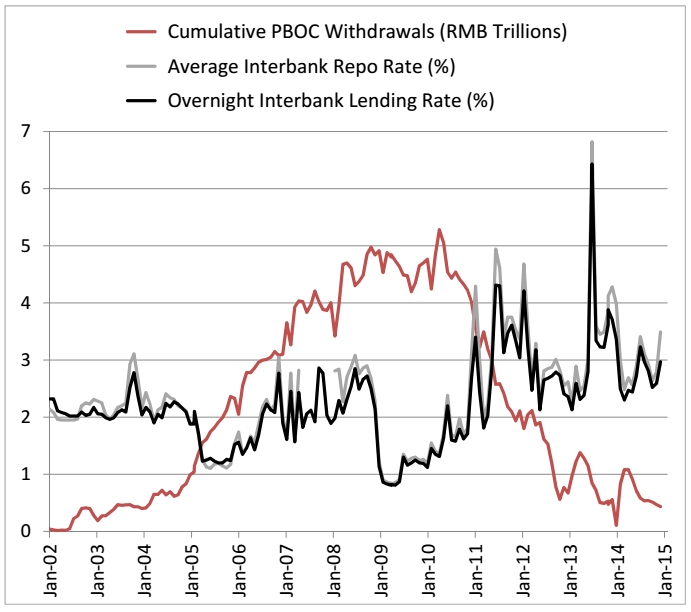 The mid-2013 event is often characterized as either a market liquidity crisis or a failure by the government to respond. We analyze transactions-level data and find that neither of these characterizations is correct. China has three non-commercial policy banks which act as agents of the government and often participate in interbank markets. We find that these policy banks provided a lot of liquidity to the interbank market at fairly low interest rates during the mid-2013 event, at a time when the Big Four were extremely restrictive. The Big Four also absorbed much of this increase in policy bank lending, with no evidence of actual need. In fact, the Big Four quickly redistributed most of what they had absorbed to smaller banks like JSCBs at an average spread of almost 270 basis points. This prevented policy bank lending from lowering interbank rates and can be explained as a strategic response by the Big Four.

A calibration of our theoretical model accounts for one-half of the increase in interbank interest rates and one-third of China’s credit boom. This quantification shuts down fiscal stimulus to isolate the effect of tougher liquidity regulation. The money multiplier calculation mentioned above indicates that the contribution of the stimulus package to the credit boom is of the same order of magnitude as the effect of liquidity regulation in our calibration.

There are two channels through which stricter liquidity regulation increases credit in equilibrium. First, some savings migrate from deposits at the Big Four to the off-balance-sheet WMPs of the JSCBs, increasing credit because small interbank price-takers lend more per unit of savings than big interbank price-setters. Second, instead of sitting idly on the liquidity that they intend to withhold from the interbank market, big banks lend more to non-financial borrowers.

More recent developments present additional challenges to purely demand-side stories. Average WMP returns have fallen from 6% to 4% over the past few years, with no major changes to deposit rates, while WMPs outstanding have continued to grow (from RMB 15 trillion in 2014 to RMB 29 trillion in 2016). This reveals active supply of WMPs by banks, not just demand for WMPs by investors.

Our analysis connects China’s most recent credit boom to stricter liquidity regulation. This connection is important, both because it shows that the simple stimulus-led explanation for the boom is incomplete and because it shows how severe the unintended consequences of regulation can be.