Many developing countries adopt industrial policies favoring upstream sectors. Liu (2018) shows these policies might enhance aggregate production efficiency. When sectors form a production network, market imperfections generate distortions that compound through input demand linkages, accumulating into upstream sectors and creating an incentive for well-meaning governments to subsidize these sectors. The study proposes the measure “distortion centrality,” which is a sufficient statistic that can guide policy interventions in arbitrary networks. Distortion centrality predicts sectors that were promoted in South Korea in the 1970s and modern-day China, suggesting that these policies might have generated positive aggregate effects. 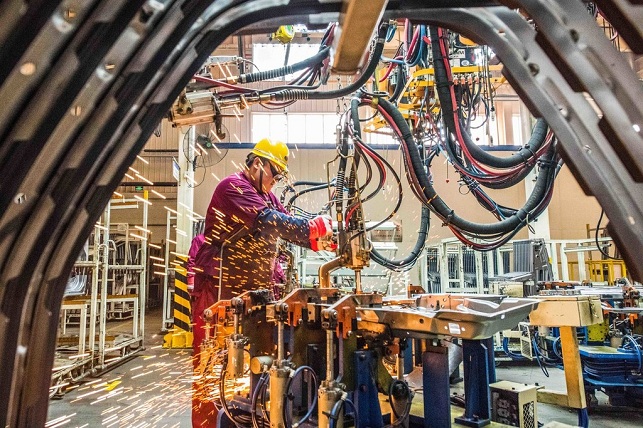 Many developing economies adopt policies that promote selected economic sectors. Japan employed this approach from the 1950s to the 1970s, South Korea and Taiwan followed suit from the 1960s to the 1980s, and China does so today. When does such “industrial policies” make sense? This is an old and contentious question (Hirschman 1958, Krueger 1990, Wade 1990, Williamson 1990, Amsden 1992, Rodrik 2006, Lane 2017).

In a recent paper, I provide a formal analysis of the economic rationale behind industrial policies. The starting point is that sectors supply inputs to each other—forming a production network—and suffer from some form of market imperfection, such as poor access to credit markets. Such imperfections raise effective input prices and production costs, thereby generating misallocation of resources across sectors and creating room for welfare-improving policy interventions.

These central sectors are typically upstream and correspond with the same sectors that policymakers seem to view as important targets for intervention. My empirical analysis suggests that industrial policies in modern-day China and historical South Korea might have generated positive aggregate effects.

Policy interventions are only effective if they counteract the misallocation of productive resources. In a production network, distortionary effects of market imperfections compound over input demand linkages. Imperfections cause less-than-optimal levels of input use, thereby depressing the amount of resources used by the input-supplying sectors, who in turn purchase less from their own input suppliers. These effects keep accumulating through intermediate demand. Consequently, certain sectors—those that supply a disproportionate fraction of output to others suffering from market imperfections—become where all distortionary effects accumulate and have the most severe under-allocation of resources. The aggregate economy could benefit from policies that redirect resources to these sectors. 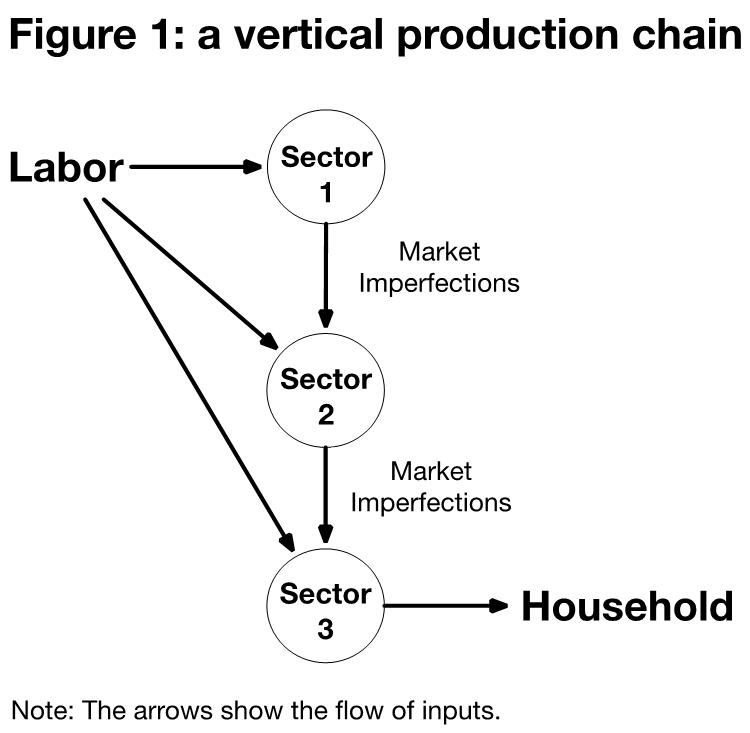 This intuition can be understood through an example of a vertical production chain (see Figure 1). All sectors use labour; moreover, sector 1 supplies to 2, 2 supplies to 3, and 3 supplies to households. Suppose intermediate linkages are subject to credit market frictions, so that sectors 2 and 3 incur additional financial costs when buying goods from sectors 1 and 2.

How do these imperfections affect resource allocation? First, they depress the demand for intermediate inputs, causing sector 1 to underproduce relative to sector 2, and sector 2 to underproduce relative to sector 3. Second, these effects compound backwards, causing upstream sector 1 to be the most underproduced sector. Consequently, policies that subsidise and expand the upstream sector, which is too small, will raise aggregate efficiency.

This example also demonstrates that policy effectiveness depends on the degree of market imperfections, as subsidising upstream can bring large efficiency gains only when resources are severely misallocated by market mechanisms.

The structure of real-world production linkages is of course more intricate, but the intuition in Figure 1 generalises to a notion I call “distortion centrality,” which applies to arbitrary production networks with market imperfections. Loosely speaking, distortion centrality is a measure of the overall degree of resource misallocation in each sector, after aggregating all effects of market imperfections that compound through production linkages. This measure guides policy interventions because it quantitatively summarises the social value of policy spending in each sector.

Distortion centrality has the following properties:

2. Distortion centrality averages to one across all sectors; hence, uniformly promoting all sectors has no aggregate impact.

3. Distortion centrality depends on both the distribution of market imperfections in the economy and the network structure, including cross-industry input-output linkages as well as imports and exports. The measure tends to be higher in sectors that supply a disproportionate fraction of output—directly and indirectly—to sectors that suffer the most from market imperfections.

4. The measure is substantively different from sectoral size, as measured by output or value-added, and other notions of sectoral importance, such as the degree of within-sector market imperfections.

In a general network, every sector supplies to many others, and the notion of “upstream” might not be well defined. Identifying sectors with high distortion centrality hence requires knowledge of market imperfections, which are difficult to estimate. Indeed, a leading criticism of industrial policies is that governments have difficulty identifying market imperfections (Pack and Saggi 2006).

Considering these challenges, is this theory practically useful? I empirically examine the input-output matrices of modern-day China and historical South Korea, two of the most salient economies with active government interventions. I find these networks to be “hierarchical,” meaning they are generalisations of vertical production chains: their sectors can be ranked by a well-defined notion of “upstreamness,” so that upstream sectors supply a disproportionate fraction of output to other relatively upstream sectors (see Figure 2).

Hierarchical networks are similar to vertical chains, in the sense that distortion centrality is insensitive to underlying market imperfections and tends to align with sectoral upstreamness. This implies that sectoral distortion centrality in China and South Korea can be computed based on input-output matrices, without having to precisely estimate market imperfections in these economies. 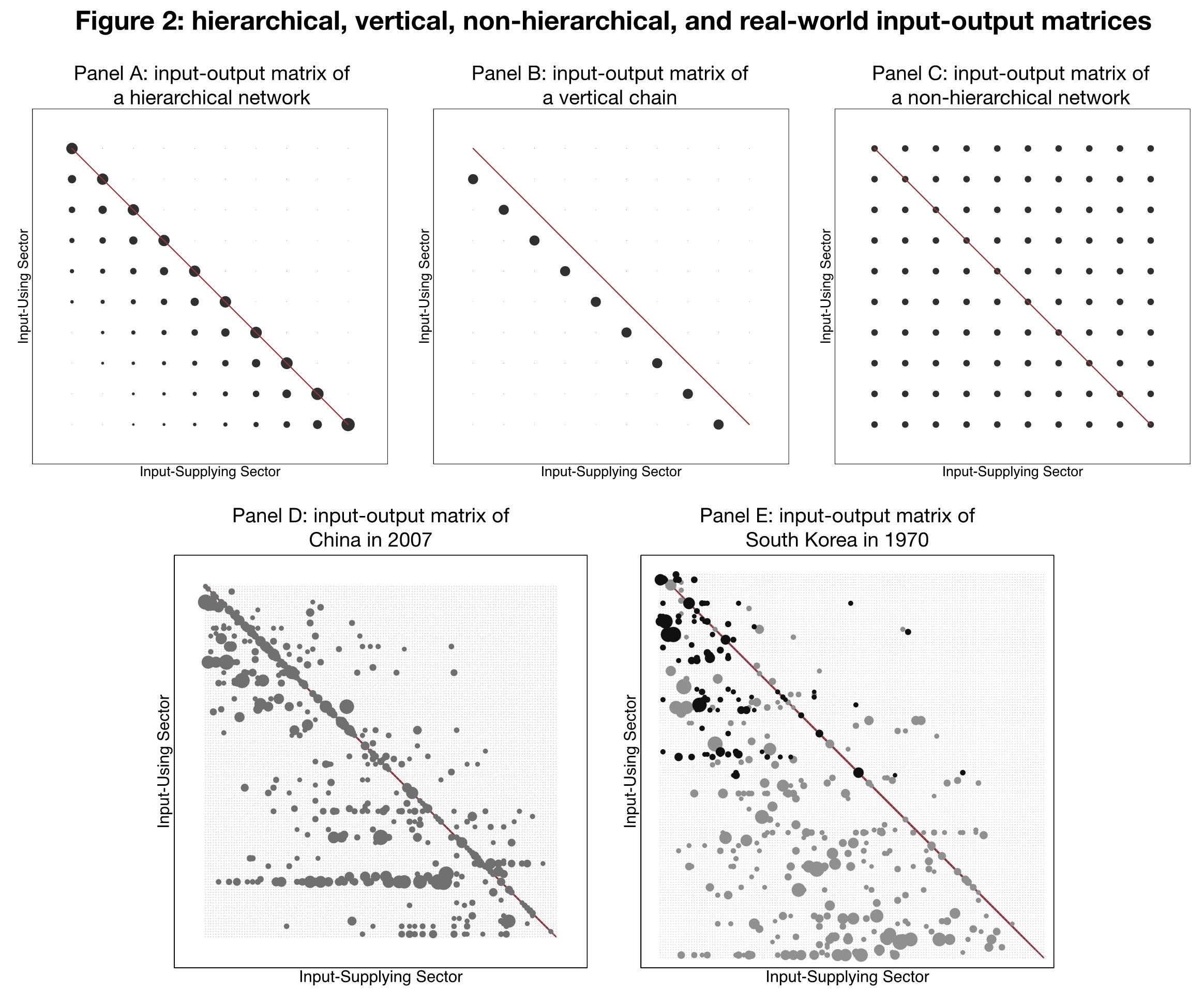 1. These figures display five input-output matrices, which visualise the structure of cross-sector production networks. In each matrix, columns represent input-using sectors and rows represent input-supplying sectors. The size of each cell represents the strength of the input-output demand relationship, i.e. cell (i,j) is drawn in proportion to the fraction of sector j’s output that is used by sector i. The diagonal (highlighted in red) captures the fraction of each sector’s output used by the sector itself.

2. Panel A represents a typical hierarchical network. Sectors are arranged in decreasing order of upstreamness; more- upstream sectors supply a disproportionate fraction of output to other relatively upstream sectors.

4. Panel C represents a symmetric production network, which is non-hierarchical and does not have a well-defined notion of “upstream.”

5. Panels D and E demonstrate that input-output matrices in China and South Korea bear striking resemblance to the hierarchical network in Panel A.

6. In Panel E, cells are darkened if the input-using sector was promoted by South Korea’s industrial policies during the “Heavy-Chemical Industry” drive in the 1970s. The pattern shows that promoted sectors were all upstream, as they strongly supplied to other downstream sectors but used few downstream inputs in return.

I find that the heavy and chemical sectors promoted by South Korea in the 1970s were upstream (as visibly evident from Figure 2E) and had signiﬁcantly higher distortion centrality than non-targeted sectors, suggesting that government interventions contributed positively to aggregate economic performance.

The predominant view in economics research is that industrial policies tend to generate resource misallocations and harm developing economies (e.g., see the survey by Rodrik 2006). Yet, my ﬁndings show there may be an economic rationale behind certain aspects of South Korean and Chinese industrial policies, and that these policies might have generated positive economic effects. An important caveat is that these findings do not speak to the decision process behind such policies, as my analysis abstracts away from various political economy factors that affect policy choices in these economies (Krueger 1990, Rodrik 2008).

This article is a reprint with minor revisions from a VoxDev article.

Rodrik, D (2006). “Goodbye Washington Consensus, Hello Washington Confusion? A Review of the World Bank’s Economic Growth in the 1990s: Learning from a Decade of Reform,” Journal of Economic Literature.

Williamson, J (1990). Latin American Adjustment: How Much Has It Happened? Peterson Institute for International Economics.