Positive network effects may lead to winner-takes-all in some markets. The column analyses dockless bike-sharing in China to show instead how an incumbent can benefit from positive spillovers from a competitor’s entry. In the case of bike-sharing, consumers multi-home, the market exhibits positive network effects, and investment by two firms is more cost-efficient than investment by one. 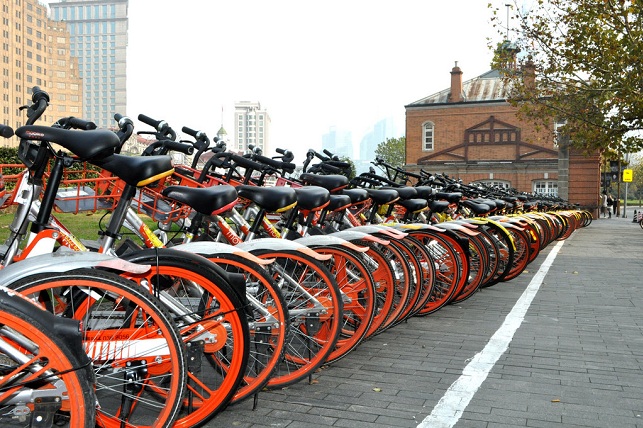 Competition in network markets has caught the attention of researchers and policy makers. It is a concern that positive network effects may lead to winner-take-all outcomes, but multi-homing and compatibility could play a role in alleviating anti-competitiveness concerns [see the pioneering work of Katz and Shapiro (1985) and the literature review by Farrell and Klemperer (2007)]. How do firms compete when they face positive network effects and multi-homing users? How do the incumbent’s price, sales, and investment change in response to entry? To what extent does the entry of a competitor expand or steal the user base of the incumbent? Are there other competitive considerations besides the potential of a winner-take-all approach? In a recent NBER working paper, we study these issues in the context of bike-sharing.

The Rise of Dockless Bike-Sharing

Since the 1960s, bike-sharing systems have gone through a few iterations, mostly driven by technological development (DeMaio, 2003; DeMaio and Gifford, 2004; DeMaio, 2009). In a traditional system, each bike is docked at a station, riders must pick up the bike from one station, and return it to this or another station of the same network. The distance between stations and origins/destinations may be far and the capacity of stations is limited. Both problems are lessened by the emerging dockless bike-sharing systems. In a dockless system, bikes are parked freely on the sidewalk (within city-authorized areas). Riders use smart phones to scan the QR code on the bike’s smart lock and reset it after finishing the trip. As summarized by an ofo slogan, dockless bikes can be used “anytime and anywhere.”

Our study focuses on ofo and Mobike, the two leading firms in dockless bike-sharing. Both originated in China but are now operating worldwide. As the first dockless system, ofo was launched on September 7, 2015 in Beijing with yellow bikes. Mobike started in Shanghai on April 22, 2016 with orange bikes. Industry reports find that ofo and Mobike accounted for 90% to 95% of the Chinese bike-sharing market from the very beginning, and most users multi-home.

Does Entry Help or Hurt the Incumbent?

Using news reports and ofo’s internal data (up to September 14, 2017), we identify 59 cities that were served first by ofo and then joined by Mobike. (NB: We exclude Beijing from the study sample because ofo did many experiments in Beijing before expanding to other cities. This makes Beijing incomparable to other cities.) We label them ofo First cities. There are another 23 ofo Alone cities and 22 Mobike First cities. Figure 1 plots the geographical distribution of these cities. Taking ofo as the incumbent and Mobike as an entrant, we apply difference-in-differences (DID) to the sample of ofo Alone and ofo First, while defining Mobike’s city-specific entry as the “treatment.” 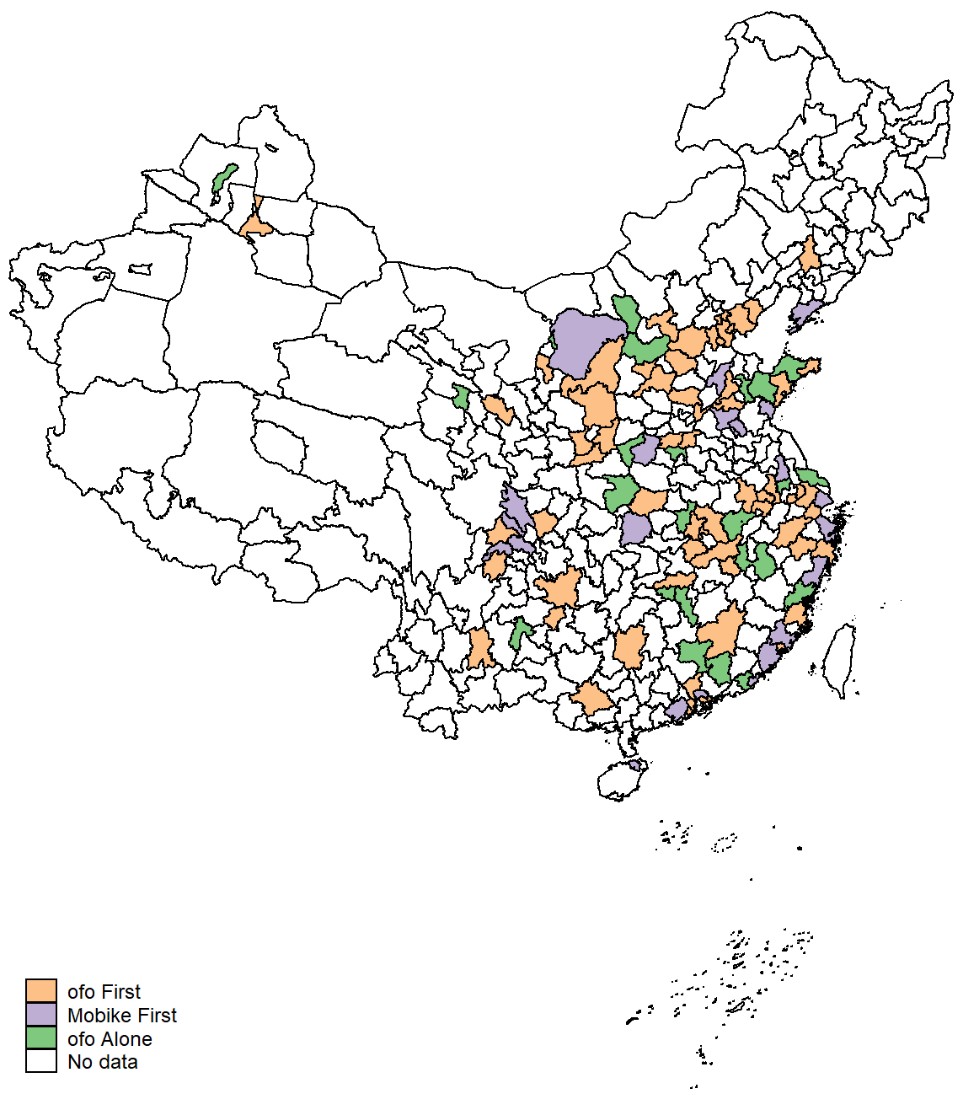 Mobike’s entry is found to boost ofo’s daily trip volume by 40.8% and enhance ofo’s average revenue per trip by 0.041 RMB. The latter finding suggests that the booming trip volume is not driven by an intense price war. However, omitted variables or endogenous entry may still challenge the causal interpretation. To address this issue, we confirm that ofo First and ofo Alone cities are comparable in pre-treatment trends after extensive controls, and the baseline results are robust to heterogeneous time trends, placebo tests, and subsample regressions. Furthermore, we predict Mobike’s entry date in a city using the timing of Mobike’s venture capital funding (8 rounds in total) and the city’s predetermined attributes such as population, seasonality, and transportation infrastructure. Using the predicted entry date as the instrumental variable for the actual entry date, we confirm that Mobike’s entry benefits ofo in both trip volume and revenue per trip.

Usually, the entrant steals consumers from the incumbent and presses the incumbent to lower price, unless the entry expands the market demand. However, even if the overall market expands, there should be significant market stealing between Mobike and ofo, as most consumers multi-home. Indeed, Mobike’s entry has reduced the percent of old users that remain active on ofo, but this market stealing effect is dominated by the expansion in new users. Consistently, in the days right after Mobike’s entry but before ofo made any new bike investment, we find that ofo lost old users and did not pick up extra new users.

Data suggests that ofo has put more bikes in the ofo First markets since Mobike’s entry, above and beyond the periodical bike investment it made in ofo Alone markets. This could explain part of the market expansion effect, but it does not explain why ofo’s bike utilization rate – measured by the number of trips per ofo bike per day – has also increased significantly upon Mobike’s entry. Furthermore, Mobike’s entry allows ofo bikes to reach more grids (See Note 1)  and become more dispersed in the city. All these results point to a competition-reinforced network effect: Mobike’s entry has likely expanded the overall network of bike-sharing, attracted more consumers to join bike-sharing, and helped to expand the ofo network in depth, width, flatness, and user reach.

Putting All the Elements in a Theoretical Model

To best understand the empirical facts, we write a model with one or two firms in the market. In both types of market, consumers decide whether to search for a bike, given the price of each firm and the expected probability of finding any bike. In addition to price, firms also decide on bike investment, which influences the matching probability and is subject to convex costs. Naturally, congestion creates a negative network effect but if the matching technology exhibits increasing return to scale, it also creates positive network effects. In light of the network effects, we derive how the firm(s) chooses price and bike investment in equilibrium.

The model predicts a higher price in duopoly than in monopoly because each searching consumer searches once and will take the found bike no matter which firm it belongs to. The monopolist must fully incorporate the negative impact of a price hike on consumer willingness to search, but a duopolist ignores the negative spillover of its own price hike on the competitor. This incentive leads to higher price in duopoly. In contrast, the comparison on trade volume, bike investment, and bike utilization rate depends on the network effects. When there are significant increasing returns to scale facilitated by the matching technology, competition could generate a market expansion effect that is large enough to dominate the market stealing effect. In that case, each duopolist has an incentive to make greater bike investments than the monopolist and, as a result, serve more trips and enjoy a higher bike utilization rate.

Put another way, market expansion occurs not only because of multi-homing and compatibility, but also because bike-sharing has positive network effects. A user who rides a bike from A to B makes the bike available for the next rider at B. Such “consumption-as-supply” could make the matching more efficient as the network size increases. When thousands of consumers use bike-sharing in a small area, the wide availability of bikes increases the expected probability of finding a bike at the required time and location. More efficient matching also motivates firms to put more bikes on the market, which further increases the demand. Nevertheless, these network effects must be traded off against the cost of bike investment and maintenance. If the investment cost is convex in the number of bikes, it could constrain the network size from infinity, and therefore leave room for competitive entry.

Our model predicts that, when the positive network effects are sufficiently large but not too large to overcome the convex investment cost, each duopolist could engage in more bike investment than the monopolist. This is because each duopolist free rides on the competitor’s investment. Every bike invested by firm 2 costs nothing to firm 1, but it expands the overall market and benefits firm 1. Moreover, with positive network effects in the overall matching technology, firm 2’s investment makes firm 1’s investment more efficient in attracting users and improving the matching rate. Monopoly cannot achieve the same efficiency because the monopolist must invest at its own cost to get to the same scale and that cost might be too convex to justify the investment.

Our work has two policy implications. First, it challenges the “winner-take-all” assumption in a nascent market with positive network effects. According to that concern, positive network effects would enable the incumbent to become a natural monopoly and then abuse its monopoly power to harm consumers. In bike-sharing, we show that the incumbent could benefit from a competitor’s entry, even if their goods are close substitutes. The entry creates positive spillovers to the incumbent because consumers multi-home, the market exhibits positive network effects, and investment by two firms is more cost-efficient than investment by one. Second, our results also highlight competition with the outside options for transportation. Many theories of network markets, such as Armstrong (2006) and Bryan and Gans (2018), emphasize head-to-head competition between firms but assume away their competition with the outside markets.  In our context, attracting new users to search for a bike is essential to market expansion.

Note 1: We define one grid as a square kilometer.