Regime changes in China between AD 1000 and 2000 systematically altered the relative importance of different regions in the political hierarchy of that time. The evolution of Chinese provincial capitals and economic activities during this period throws light on how political factors shape economic geography. Employing a panel dataset across 261 prefectures, we find that while a prefecture definitely benefits from gaining provincial capital status in terms of population density and urbanization, the economic advantage of provincial capital prefectures shrinks greatly after losing capital status — implying that a prestigious past does not always matter for current local development. This finding differs from a large body of literature concerning path dependence. To understand the underlying factors, we document that not only public offices but also important production factors such as human capital and transportation networks alter their geographical location with the change in provincial capital status, which suggests that: 1) We cannot simply consider provincial capitals as consumption-intensive “parasite cities”; and 2) The state can play a critical role in overcoming the inertia in the location of economic activity through providing infrastructure. 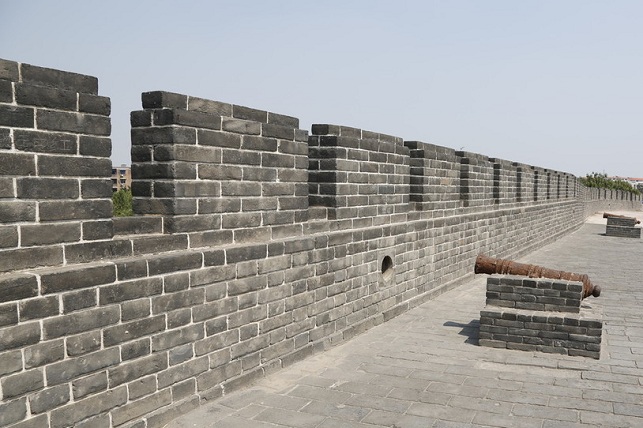 In AD 1000, the city of Kaifeng was the most prosperous city in China and, with an estimated population of 1 million, arguably the largest city in the world. By 2015, however, its GDP ranks 129th among Chinese cities and its former glory is long forgotten. Kaifeng's decline is closely related to its status in the political hierarchy having first lost political prestige as the national capital in the thirteenth century and then its status of provincial capital in the twentieth century. Kaifeng is just one of many cases whose economic status rises and falls with its position in the political hierarchy in China.

In Bai and Jia (2018), we attempt to understand this politico-economic link by tracing the evolution of provincial capitals and spatial distribution of economic activity in China from AD1000 to 2000. By documenting the changes in economic activity, we complement existing literature focusing on the persistence in economic activity due to locational fundamentals (pioneered by Davis and Weinstein 2002) or the persistent impacts of temporary advantages (exemplified in Bleakley and Lin 2012). By exploiting changes in political status and uncovering some mechanisms, we extend the research relying on cross-sectional variation to understand how politics shapes economic geography (e.g., De Long and Shleifer 1993). Moreover, by investigating when history matters little, we can also better understand why history matters (see Nunn 2009 for an overview): whether the state (or another player) has incentives and capacity to overcome the inertia in the location of economic activity is an important predictor for whether history matters.

As the largest enduring state with a distinctive political hierarchy, China provides a particularly advantageous context to understand how politics affect economic geography. On the one hand, China underwent six dynastic regime changes during AD1000-2000 that brought about drastic shifts in boundaries and centers of power, with national capitals relocated five times and the method for dividing provinces amended from replying on natural geographical barriers (known as “suiting [i.e., following] the forms of mountains and rivers” to intentionally including the natural barriers within provinces so that boundaries “interlocked like dog's teeth”. Consequently, 63 out of the 261 prefectures defined by the 2000 boundaries were once a provincial capital whose status changed with a new regime. On the other hand, despite regime changes, China's political hierarchical system remained surprisingly stable, where the central government in each regime ruled the vast country by using a three-tier administrative system (province-prefecture-county) and monopolizing the power of appointing, reshuffling and removing local officials for each tier. Thanks to the enduring administrative system, China has a long history of governmental censuses whose rich information on population, geography, infrastructure, and bureaucracy allow us to trace the changes in capital status, construct extensive prefecture-level data over time, and examine how both gaining and losing importance in the political hierarchy matters for a prefecture’s development.

Provincial capitals serve two important roles: they are (1) administrative centers for provincial affairs, and (2) important nodes through which the central government connect with large number of localities throughout the country to collect/distribute resources and information. Two costs thus become important for the location of a capital for a province: the cost of collecting resources and information within a province and that of delivering some part of them to the national center. We then define the weighted sum of the two distances as “hierarchical distance” and show a prefecture's rank in hierarchical distance within a province to be a strong predictor of its capital status.


Figure 1: Hierarchical Distance and Location of Provincial Capitals in the Ming Dynasty 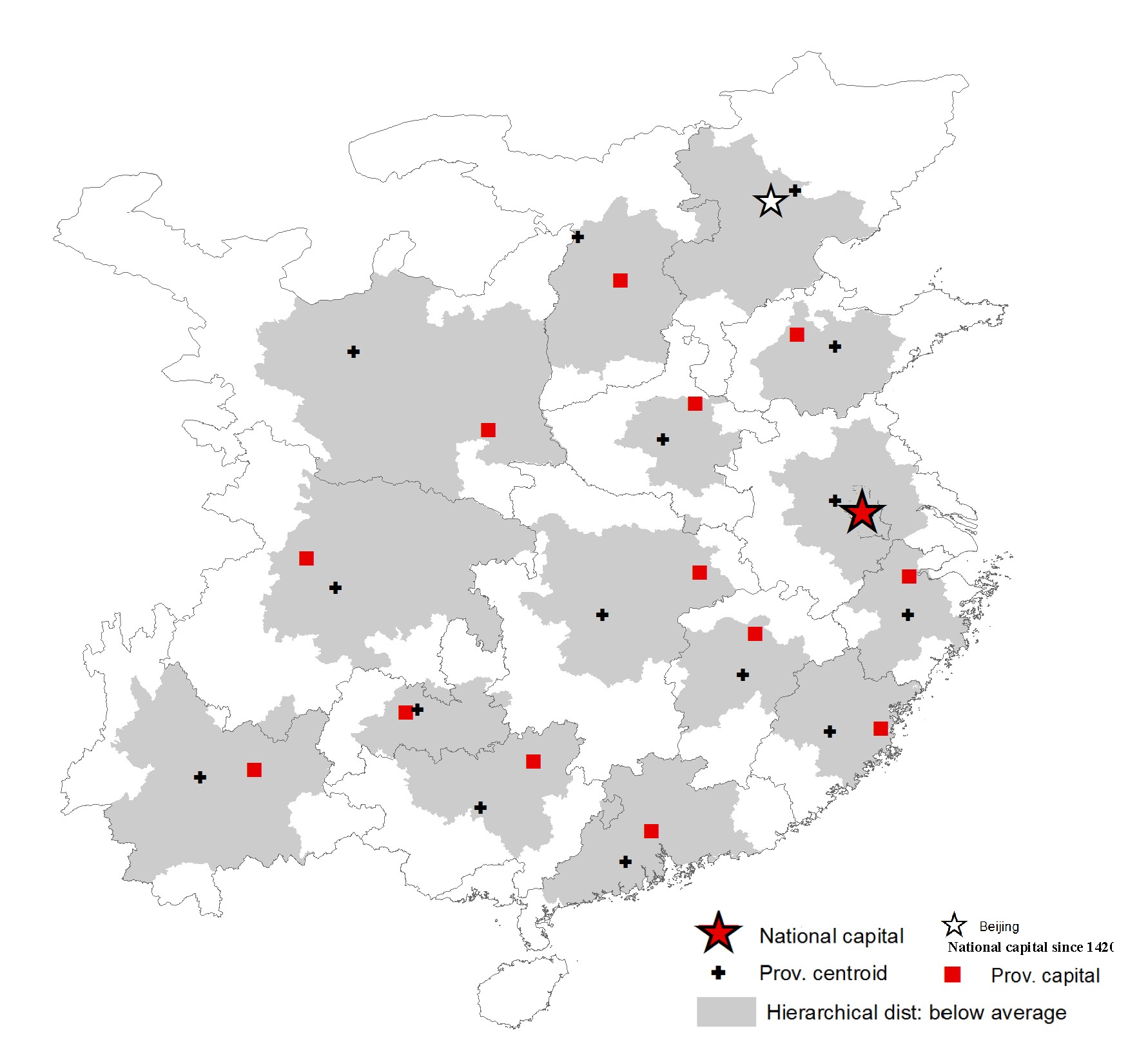 The Importance of Gaining and Losing Provincial Capital Status 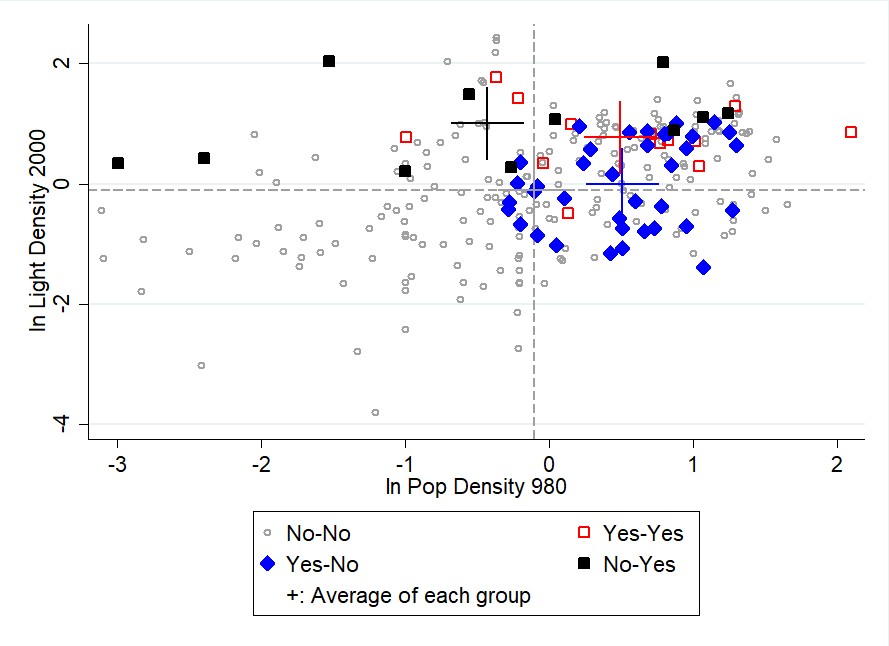 Analogous to the analysis above, we can divide the prefectures into four groups every two regimes. This way, we can further visualize the four groups period by period. To compare prefectures with similar characteristics, we first regress the log population density on all of the prefecture characteristics — its geographical variables, including whether a prefecture contains a plain or major river or is on the coast, as well as its slope, elevation, longitude, and latitude, its agricultural variables, including five types of crop suitability, and its macroregion dummies — and obtain the residuals. We then plot the average residuals for the four groups period-by-period (relative to the time of status change) in Figure 3, which again shows systematic changes:

In Bai and Jia (2018), we examine these patterns more systematically using three approaches: difference-in-differences analysis, an instrument variable approach guided by the algorithm mentioned above, and a matching method.


Figure 3: Pooling All Changes Together 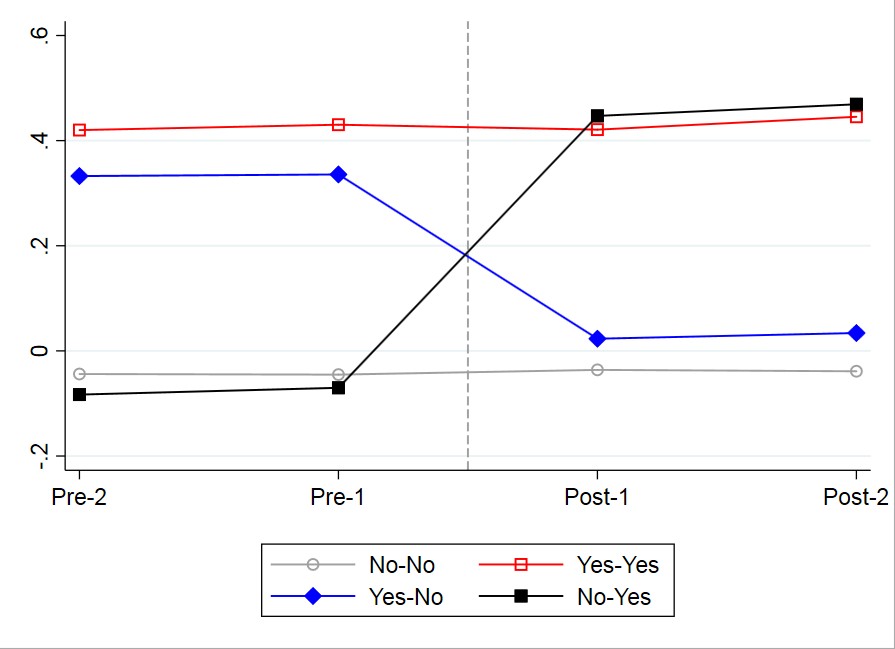 What, then, explains the link between political hierarchy and regional economic development? Many factors change along with a prefecture’s political status. Because it is difficult to enumerate each factor in history and the current age, we focus on certain factors guided by answering two questions important for interpreting our findings. First, is our finding purely driven by public employment (and possible multiplier)? The answer to this question has implications on whether we can consider the provincial capitals as consumption-intensive “parasite cities.” Second, since fixed costs are important for explaining path dependence, is there any evidence that some player incurs the fixed costs? We find that public employment is indeed part of the channels; however, we also demonstrate that important production factors — such as human capital (measured by the number of individuals who are successful in the imperial exams in the historical context and those with a high school level of education and above in 2000) and transportation networks (built by the state) are also affected. Specifically, we observe a systematic rise and fall in a region's human capital and its centrality in the transportation networks after the gaining and losing of capital status. The finding on transportation networks also illustrates that the state can play a critical role in overcoming the inertia by providing important infrastructure.

A combination of an enduring state, a distinctive political hierarchy, and many changes in national and provincial capitals make China a particularly advantageous context for examining the link between politics and economic geography. Given that the first-tier cities in today's China are typically provincial capitals, it is perhaps not an exaggeration to claim that political hierarchy shapes the country’s urban hierarchy.

The existing literature on path dependence has provided us abundant examples in showing that history matters. Yet, we also observe changes in economic activity in many contexts, not only in terms of regional development but also in terms of industrial location within and across countries. In this paper, by documenting when history matters little, we actually can better understand why history matters. History would matter more if the state lacked the incentives to relocate the capitals; for instance, if China were so small and homogeneous that the choice of capitals mattered little or if the state lacked the capacity even if it had the incentive to relocate economic activity. We hope that such a perspective is useful in interpreting persistence and changes in different contexts.