What Do a Billion Observations Say about Distance and Relationship Lending? 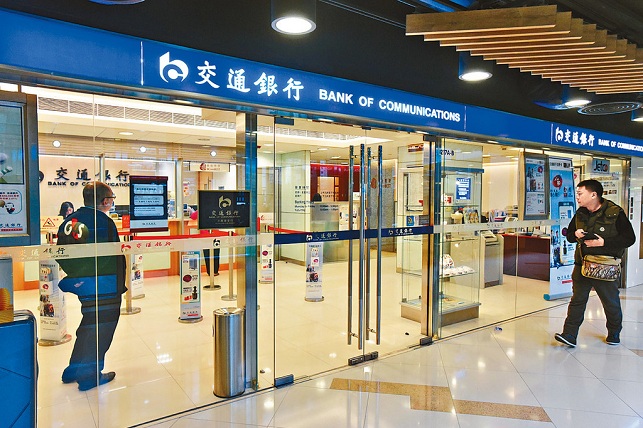 China’s banking sector became the world’s largest in 2016 with total assets of approximately USD33 trillion (versus USD31 trillion in Eurozone and USD16 trillion in the US). As in many other countries, a significant amount of corporate loans is based on relationship lending in China. Specifically, banks invest substantially in building relationships with borrowers to collect soft information that mitigates the information asymmetry, especially for default risks. Academic scholars and practitioners have long debated on how borrowers’ geographic proximity affects the information asymmetry between banks and borrowers and the subsequent default risks [e.g., Degryse and Ongena (2005) and Petersen and Rajan (2002)].

We obtain the big data of seven million loans from the China Banking Regulatory Commission (CBRC), which cover more than 80% of China’s banking market. We calculate the physical distance of billions of lender-borrower pairs by using the geographic information system (GIS). We discover a U-shaped pattern between lender-borrower distance and lending intensities. Figure 1 shows that within 250km, lending intensities decrease with distance due mainly to the increased monitoring costs. In contrast, banks start to lend more intensively to borrowers in the longer distance beyond 250km. We also find that, in China, the distant loans are mainly from bank branches located outside of borrowers’ cities (i.e., outside city loans). For example, the average lender-borrower distance is 277 km for outside city loans while it is 42 km for inside city loans. Overall, distant loans account for 11% of total bank loans in China. 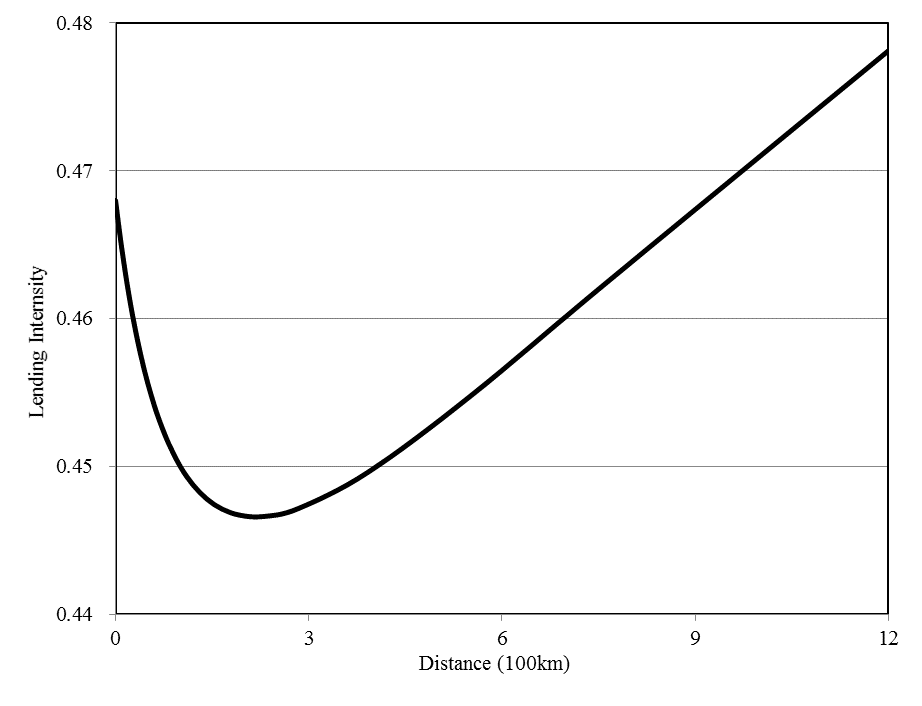 Notes: The figure plots the U-shape patterns between geographical lender-borrower distance and lending intensities. The horizontal axis represents the distance between bank branches and borrowers. The unit is in 100 kilometers. The vertical axis represents the predicted share of loans that have been borrowed from the bank based on the regression of the share of loans borrowed on the linear and quadratic terms of the logarithm of distance. We control for firm×year fixed effects and bank fixed effects. See detailed calculation in the full paper manuscript.

To explain this substantial distant lending in China, we find that soft information could pass through the inter-firm network to facilitate the distant lending. In particular, for each loan, the CBRC records the borrower’s connected firms, such as sibling firms, related transaction parties, and shareholders. Based on this information, we construct the inter-firm network and define a borrower as connected to the lending bank if any of its connected firms are local borrowers of the same bank. The CBRC data also record monthly internal rating changes for each loan, allowing us to observe banks’ soft information on borrowers directly. In particular, when we observe that a bank downgrades the delinquent loans before the payment due date in our data, we consider this bank to have good soft information for default risks, which helps the bank foresee the delinquent event. We find that banks can predict the delinquent events more accurately for connected borrowers, especially for distant loans. On average, an additional connection to a distant borrower is associated with a 13.6% increase in the banks’ ability to predict delinquent events. In contrast, for borrowers that are close-by, the effect of the inter-firm network is muted since the banks can obtain soft information cheaply from borrowers via direct monitoring and screening. Consequently, banks use the soft information collected via firm networks to choose the good quality distant borrowers. An additional connection to borrowers is associated with a 10% decrease in default rates.

Our study, for the first time, shows the non-monotonic pattern of distance and lending activities. We unveil the different underlying mechanisms of extracting soft information in short vs. long distance. On the one hand, consistent with conventional wisdom, borrower proximity could reduce the monitoring and screening costs of obtaining soft information. When borrowers are close-by, instead of using the inter-firm network, the bank can cheaply obtain borrowers’ soft information by screening and monitoring. On the other hand, the inter-firm network could overcome increased costs of soft information collection, which helps banks discover good quality borrowers that are far away. The inter-firm network serves as an essential channel of soft information collection for distant lending, improving the predictions of loan delinquency and facilitating banks’ risk management. This study also sheds light on the non-trivial distant lending in many countries worldwide and on the mixed evidence regarding how geographic distance affects the relationship lending.

Although China has the biggest banking sector in the world, bank credit allocation is far from efficient. Additionally, the composition of the banking system is quite unbalanced. For example, in 2016, the big five state-owned commercial banks dominated the banking system with 59,577 branches covering 92% of the country, while the twelve joint equity banks covered only 28% of the country over 14,765 branches (see Appendix). In this landscape, it is essential to understand how borrower proximity affects soft information collection. This, in turn, can help regulators reform the banking industry (e.g., branch entry barriers) and improve credit allocation.

Figure A1: Heat Map of the Number of Big Five Banks’ Branches across Provinces in 2016. 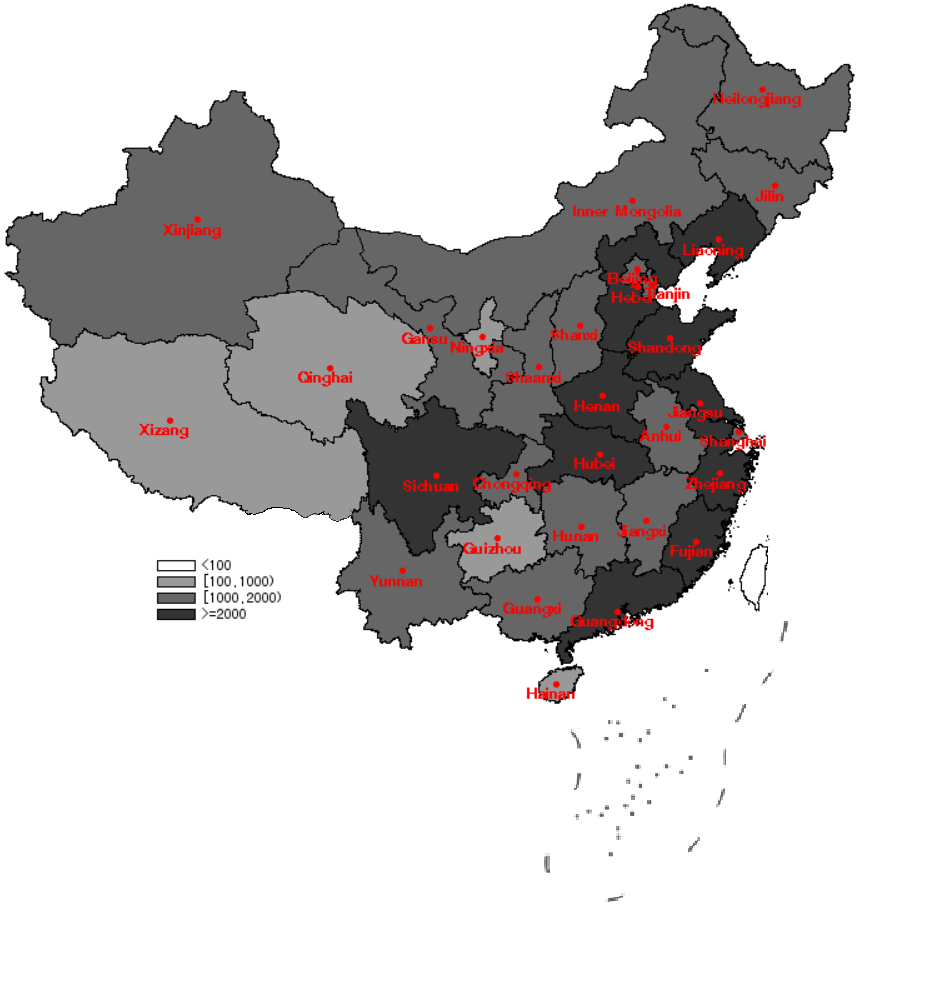 
Figure A2: Heat Map of the Number of Joint Equity Banks’ Branches across Provinces in 2016. 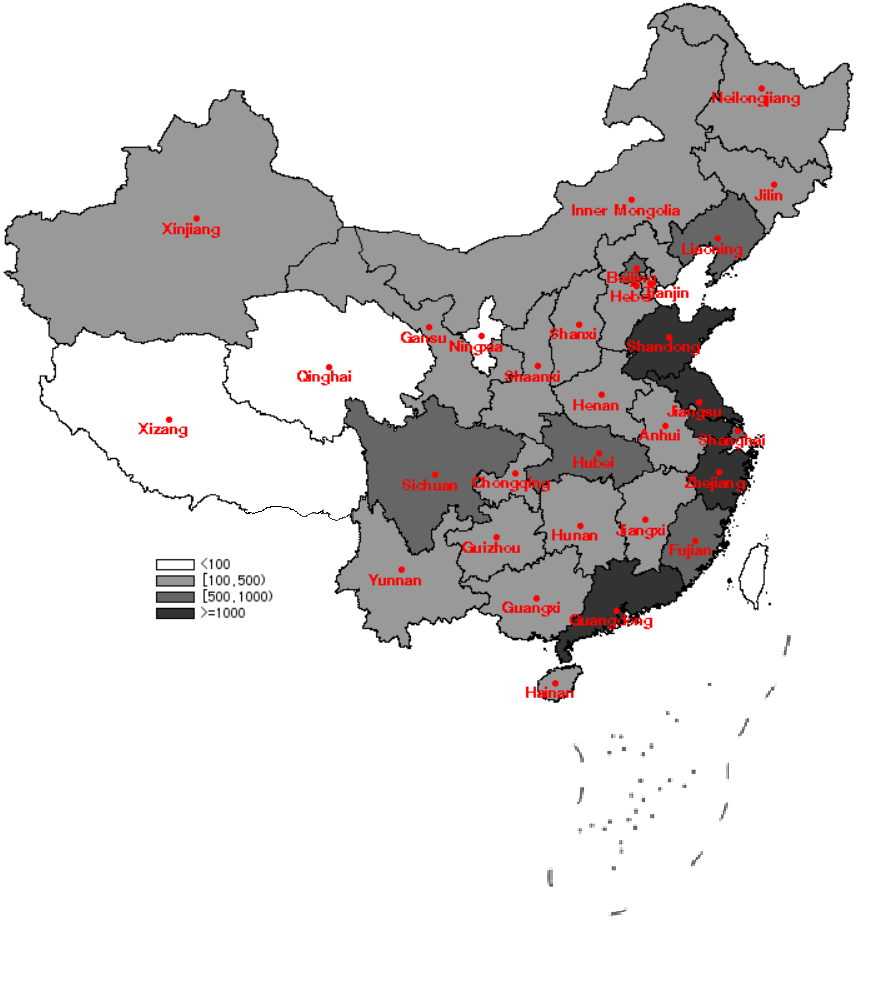